The United States Of Captain America #1: Perfect Start For A New Cap Era 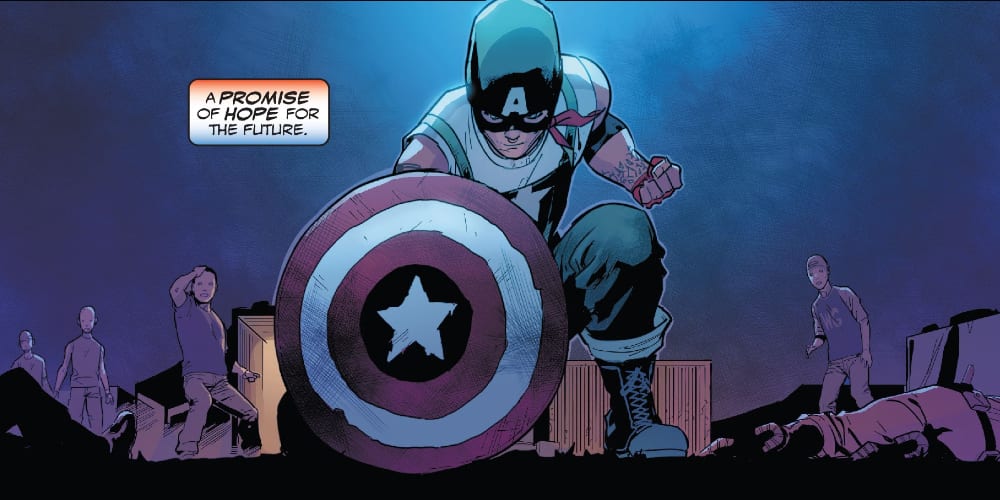 As Steve Rogers himself notes in The United States of Captain America #1, he – or, more importantly, his symbol – inspires millions of people. Unfortunately, and Cap knows this too; he can’t control what that inspiration means. And he’s seen people use his image in some truly heinous ways. For the most part, Cap is an optimistic character but still prone to melancholy. And as we watch him wash his shield (boiling water, baking soda, regular salt, and distilled white vinegar, as we now know), he’s falling into rumination. The Smithsonian wants to display the original Captain America shield. But again, even if seeing the real deal brings people to the museum, there’s no telling what kind of person they are.

This is doubly true in the Marvel Universe, which still incorporates real-world America. So, in the 616 world, Cap inspired an entire generation of superheroes and others to march for the rights of others…but he also inspired the insurgents who stormed the Capitol building on January 6th. That would make anyone question their role as the image of a nation. So cap needs a reminder of what he means to non-traitorous Americans. And in the pages of the new mini-series The United States of Captain America, writer Christopher Cantwell is bringing that inspiration right to the sentinel of liberty. 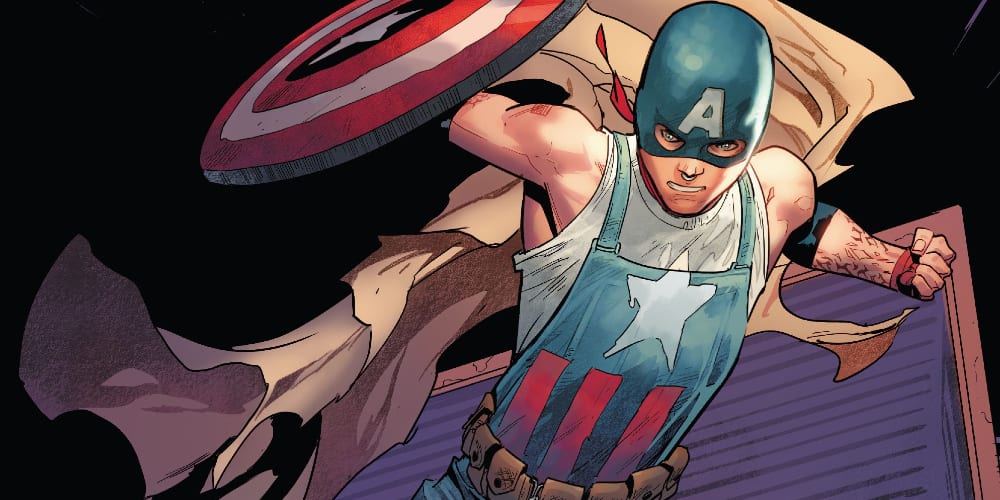 We’ve known about the new Captains for some time now, such as the first LGBTQ Captain America and the first Black woman as Captain America. In The United States of Captain America #1, we meet the first of the two caps above, Aaron Fischer, “the Captain America of the Railways.” And he is really the perfect one to start with. First, he’s very literally a new generation of heroes. Of course, all the other teen heroes, like Wiccan and Hulkiling, are too. However, Aaron is one of the first specifically created as a Gen-Z kid. Not only that, but he’s like the Trevor Project and It Get’s Better brought to life as a superhero.

Aaron’s goal as “the Captain America of the Railways” is to protect the runaway LGBTQIA+ youth around America. In his origin story, he first puts on his own version of the stars and stripes – complete with a trashcan shield painted like Cap’s shield – when he takes on an evil corporation capturing and enslaving runaway youth, mostly all of them Queer kids. Thinking about his idols, Sam Wilson especially, he suits up mostly to inspire himself. The kids need a Captain America, but he needs one too. Since there aren’t many Captains to hand out, he does it himself.

When he actually meets Sam and Steve, he fanboys out for a moment, getting to meet “two Caps for the price of one,” and tells them all about the network of Captain Americas. All over the country, all different kinds of Americans take on the mantle to protect their communities. It’s a brilliant concept for a Captain America story – especially for the 80th anniversary of the character. 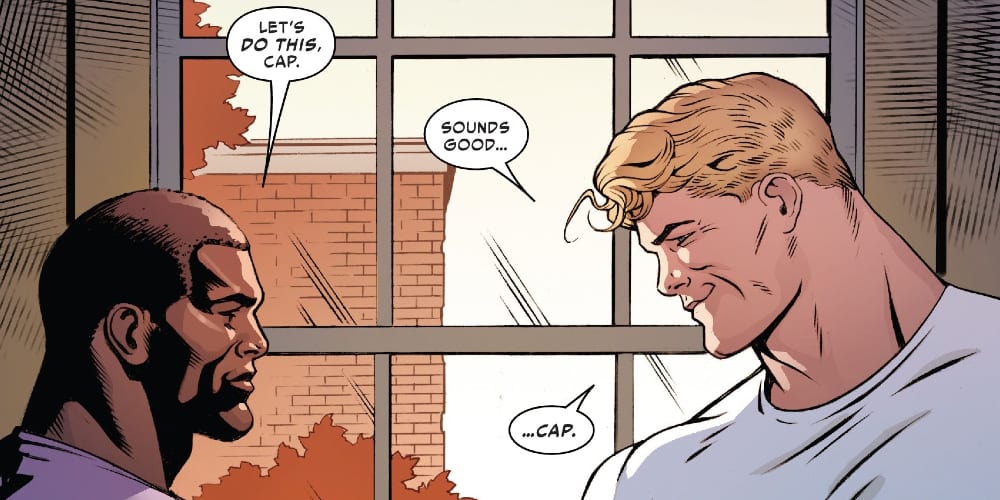 As wonderful as meeting Aaron Fischer, he just helps kick off a massive quest story. First, someone dressed as Cap steals the shield right from Steve’s hands. This is when Steve was cleaning it, so maybe it was still too soapy and slipped from his hands? Steve (for some reason stopping to suit up) and Sam, in his Falcon identity, set off to catch the thief. But this guy is fast and skilled. Before the patriotic duo can catch up to him, the thief crashes a freighter while an oncoming passenger train – Aaron on board – heads down the opposite track.

Both Sam and Steve have to give up the chase to stop a massive collision, and they just barely succeed. They meet Aaron, learn about the network, and then a woman in the shadows tries to kill Aaron. Not Cap. Not the Falcon. The teenage boy. With the shield missing and a United States of local Captain America heroes, their mission changes slightly. Not only do they need to find the shield, but they have to make sure the network of Captains America is safe. And to save a country of Caps, it’ll take more than one sentinel of liberty. Steve tells Sam to don his Captain America uniform once again, and the two head off on a road trip.

However, we know that there are more Captain Americas from the 616 out there, and if Alex Ross’s beautiful cover indicates anything, it’s that we might see not just Bucky put on the stripes, but the US Agent too. Hopefully, we do see all four of them suit up. The first issue was already delightful. More Caps = more delight. 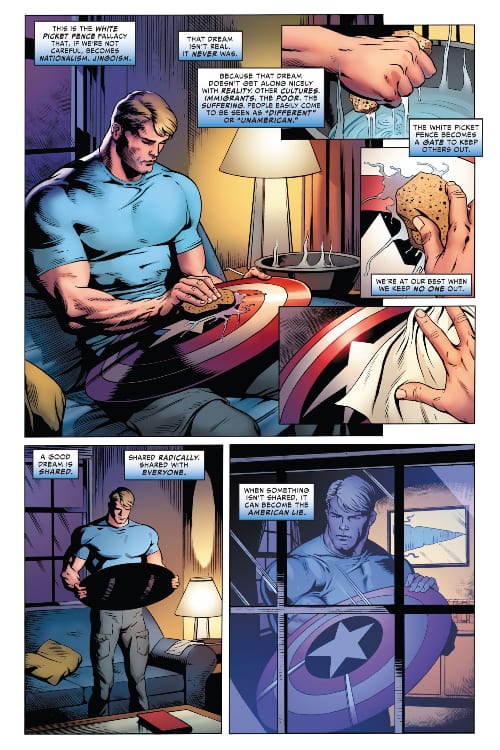 In the Hellfire Gala issue of SWORD, Doctor Doom and Steve, processing the forming of the new planet Arakko from the husk of Mars, discuss what the moment means to them. How does that work? Why are Cap and Doom bonding over this? Well, as Doom points out, they are both the symbols of their respective countries. Steve tells Doom that he doesn’t hate what the X-Men did, but he wished that they would do it together instead of using a gala to demonstrate their power.

Even though Cap isn’t Krakoan and wears the flag of one nation, he’s always taken the entire world – the entire multiverse – in as part of his mission. When he helps other nations or planets, the stars and stripes are supposed to inspire hope and relief. But, as Captain America, he understands that when some see the United States of America flag coming towards them, it inspires fear and dread. That’s because America is not a singular thing. Even the name of our country implies multitudes. But this is just as true within the country too. And those various definitions of what America represents are hardly ever consistent. But Steve has his own beliefs too. Unfortunately, however, not everyone believes in those ideals, either.

Like most great Captain America stories, THe United States of Captain America garnered a bit of backlash and controversy. We won’t go into it, other than to say that if one of my students misquoted something that horribly and purposefully, they’d have to rewrite the entire paper from scratch. So what does Cap believe?

What Exactly is the “American Dream,” According to Captain America. 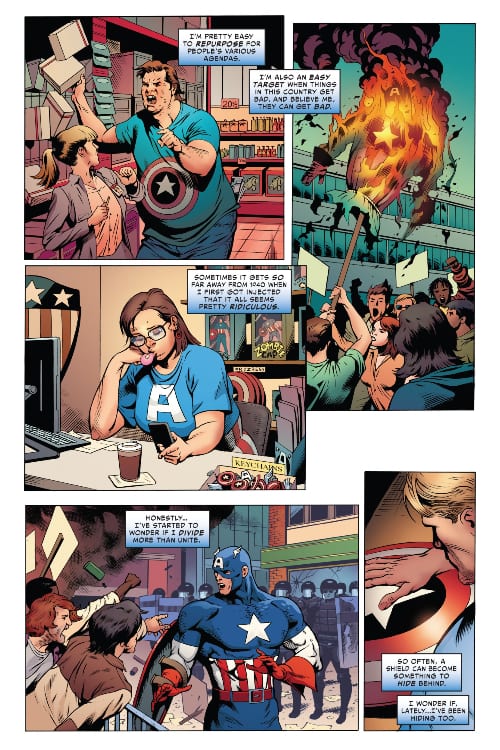 Cap recognizes that many people think the dream is a promise or a handout. He calls it the “white picket fence fallacy” and that “if we’re not careful, becomes nationalism.” But it’s that very dream that casts some as Americans and some as other. The white picket pence fallacy doesn’t get along nicely with reality. Other cultures. Immigrants. The poor. The suffering.” Most of all, “the white picket fence becomes a gate to keep others out.”

Steve believes that America is at its best when we include everyone and to “keep no one out.” Reflecting on how America once promised great things to immigrants but then treated them poorly, But there is a dream that we can reach for, through struggle and turmoil. A dream we need to fight for. And, as he told Doctor Doom in SWORD, it’s a dream we have to reach for together.

This is also Christopher Cantwell’s thesis for The United States of Captain America. If a dream is something we all have to reach for together, then having one person as Captain America doesn’t work. We need Captain Americas. Or Captains America. We need a nation of Captains, united. And that is the foundation of a great Captain America’s story, regardless of the character is holding the shield.

The United States of Captain America #1 is current for sale with future issues coming monthly.