The Bride Was a Boy is a Delightful Manga Memoir, Perfect for Pride!

Home » COMICS » Pride Month Graphic Novel Spotlight: The Bride Was a Boy, a Memoir by Chii

Pride Month Graphic Novel Spotlight: The Bride Was a Boy, a Memoir by Chii 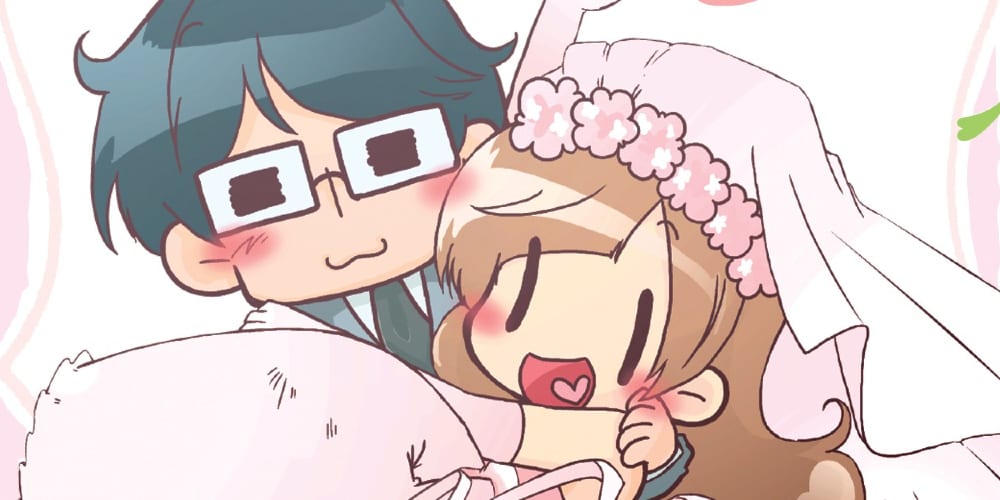 For someone who teaches graphic novel literature and writing for a living, I’ve read embarrassingly too few manga stories. But for this Pride Month Spotlight, we’re looking at one of the most beautiful graphic novels on gender identity and transition. The Bride was a Boy, written and drawn by Chii, isn’t just a well-told memoir. It isn’t just an educational experience (literally, she has lectures in here). What The Bride was a Boy is, above everything else? Adorable. This book is so sweet and kindhearted that you just want to hug every page. So, let’s get into what makes this manga so special. 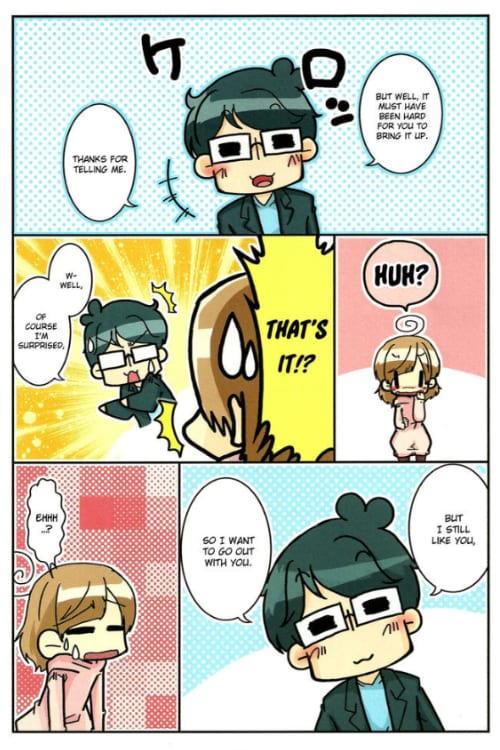 This book is serious…ly adorable. (Image: The Bride Was a Boy, Seven Seas Press)

Of course, this is for cisgender people. Even if you are an ally of the LGBTQIA+ community, that doesn’t mean you understand their experiences. Now, it’s impossible to ever fully understand someone’s experience, but thanks to good literature and movies, we can get close. The Bride was a Boy is one of those pieces of literature. From the very beginning, Chii goes through her experiences in a phenomenally open way. Two things help us identify more with Chii. First, her artwork. It’s not just the manga style, but how she renders her characters. The cuteness makes it abundantly inviting.

But it’s also just the way Chii writes. This isn’t a memoir that focuses on pain, but on love and happiness. It’s a romance about two people who just work so well together. Isn’t that what we all want? To just find the person that fits us? Regardless of gender or sexuality, we want to feel comfortable with someone. Chii doesn’t write a “beats the odds and overcomes” memoir. This is a “happiest time of my life” memoir. The decision to focus on joy makes the entire experience much more relatable to people who aren’t transgender, especially those who think being trans means a life of pain, disappointment, and despair.

The Bride Was a Boy Brings in the Education 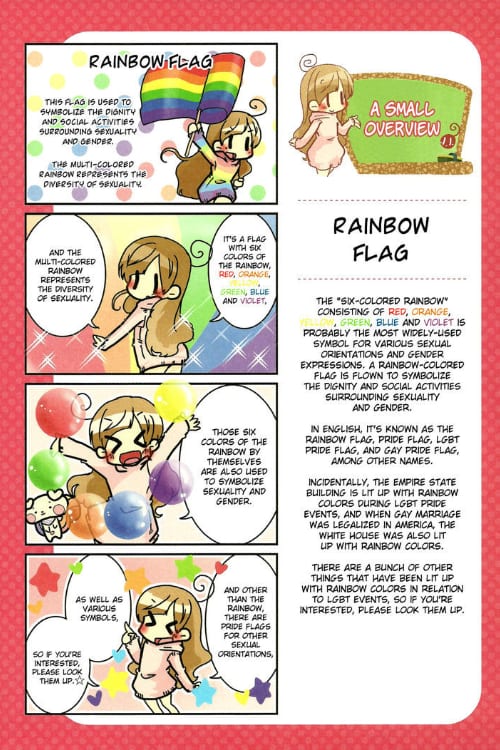 This flag is ever-changing too, and has become even more inclusive. (Image: The Bride Was a Boy, Seven Seas Press)

Some readers find information pages a bit boring, but Chii’s research and explanations are very much a part of her story. The benefit of this format is two-fold. Her story helps readers understand the legal and social lessons at the end of each chapter, while the lessons help expand her story.

These pages, interspersed throughout The Bride Was a Boy, also makes this graphic novel an excellent choice for junior and high school teachers. The way Chii makes the laws and nuances clear while not talking down to the audience is immensely helpful for teens and young learners. However, teachers would need to include additional readings and resources to fully educate their students about these issues. 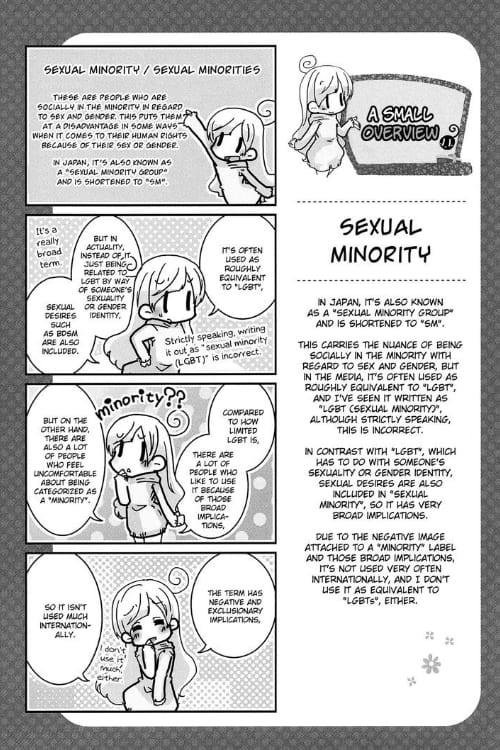 Sadly, every country finds some way to discriminate against the LGBTQIA+ community. (Image: The Bride Was a Boy, Seven Seas Press)

Reading The Bride Was a Boy gave me hope in humanity during a very dark time in our society. I happened to read this right after the Supreme Court ruled that the Civil Rights Acts protected LGBTQIA+ citizens. But, sadly, in that same week, JK Rowling Tweeted some horrible things about the transgender community, and President Trump reversed nondiscrimination healthcare protections for transgender people. The administration’s new rule is that gender and sexuality discrimination “ when someone faces discrimination for being female or male, and does not protect people from discrimination on the basis of sexual orientation or gender identity.” There are numerous resources that explain that gender is not binary and most cultures recognize more than two genders. This kind of rule is not just discriminatory but woefully ignorant.

Chii chose to focus her graphic manga on joy, love, and unity. But she still goes over the legal discrimination of the LGBTQIA+ citizens of Japan. In fact, in Japan, same-sex marriage still hasn’t been legalized on a national level (which I learned from The Bride was a Boy). LGBTQIA+ discrimination exists everywhere, and stories like Chii’s aren’t the norm, especially when it comes to her family.

“Coming Out” is a significant milestone for all LGBTQIA+ people. It’s hard to know precisely how friends and family will react. Chii dreaded telling her family, but they responded with open arms and understanding. When Chii finally had her gender legally changed, they celebrated. And they supported her during her entire transition. In fact, they were more shocked that she wanted to get married than the idea that her son wanted to be a daughter.

Even the best of parents aren’t that supportive. Not just in regards to something significant like a gender reassignment surgery. Parents tend to worry about anything they didn’t envision for the child. It’s a natural reaction. But Chii’s siblings and parents? Totally cool about it. It’s far too endearing. But since it is such a happy note, we’ll end with this image. On the day of her wedding, while waiting to walk down the aisle, Chii had this little exchange with her father: 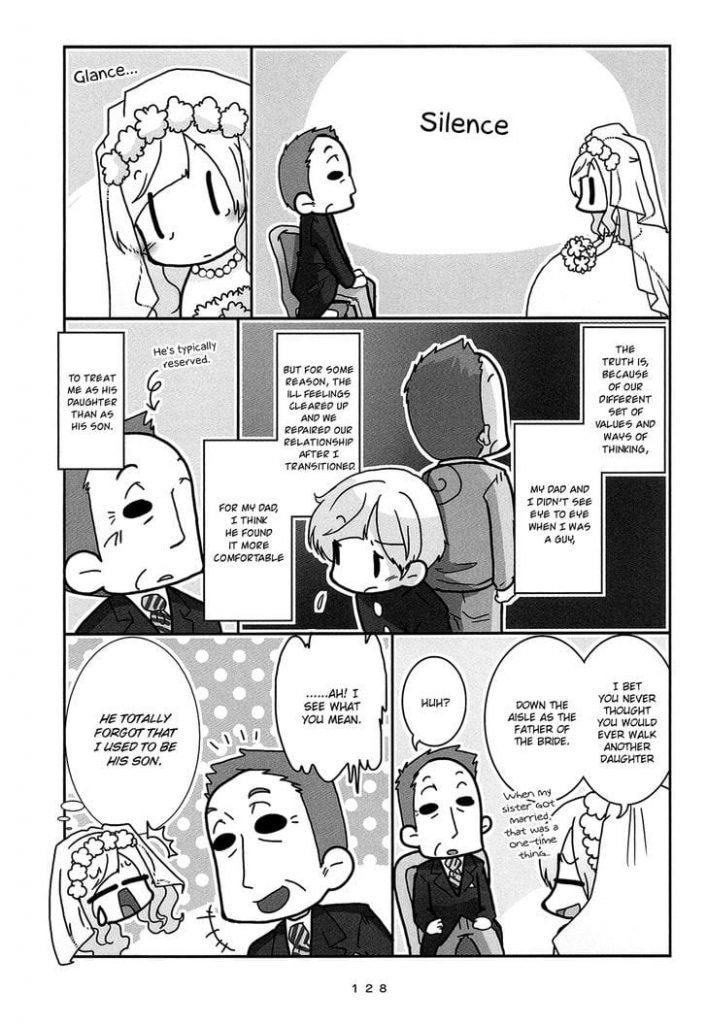 You go, Chii’s dad! (Image: The Bride Was a Boy, Seven Seas Entertainment)

To all of our transgender readers, happy Pride Month!

(Featured Image: The Bride Was a Boy, Seven Seas Entertainment)