Superman of Metropolis #2 is Really Epic, but Really Undercut too 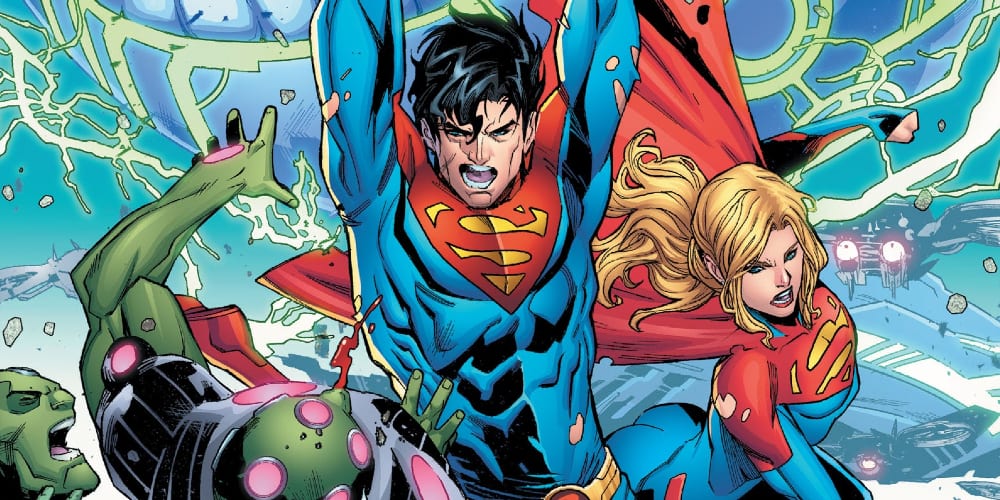 So, DC Future State week five was too massive for one week. Therefore, we’re making a special post just for Superman of Metropolis #2, which featured three epic endings we need to dive into. But for as big as these endings were, we actually needed a few more issues with this saga. Regardless, it’s time to enter the Metropo-dome!

The Superman of Metropolis Comes to His Senses, but Metropolis is a Bit Too Forgiving 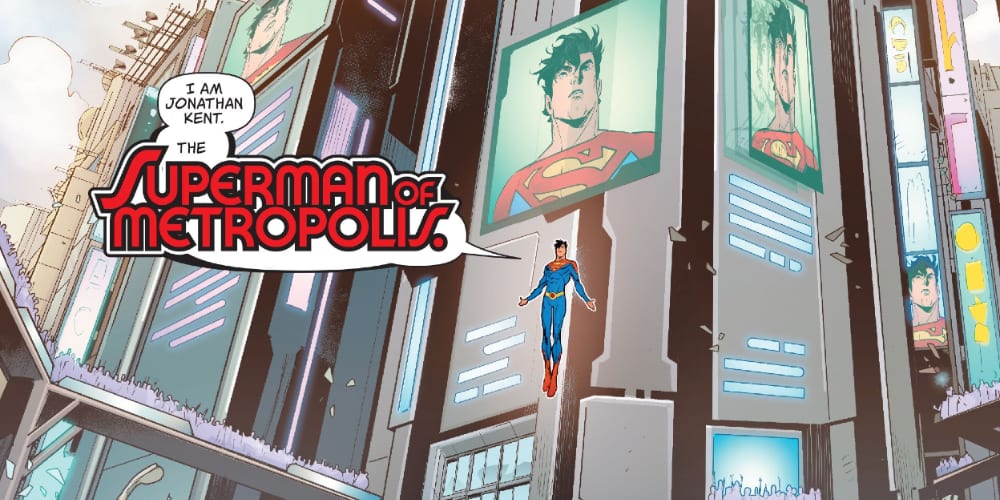 And I…am..every Jedi. You thought I was going to say Iron Man, didn’t you? (Image: DC Future State: Superman of Metropolis #2, DC Comics)

There’s a lot to discuss here, so let’s dive in. Last issue, Jonathan Kent kind of had a panic attack because of what was happening to his city, and shrunk it down into a snow globe to “keep it safe.” In other comics, we see how hated he’s become in the world, but at some point, he’s a member of the Justice League, and everyone—especially Metropolis—loves him. But how does he win back the affection of the world? We kind of get the answer in Superman of Metropolis #2—but it is definitely rushed.

What’s Happening with Superman and Metropolis These Days, Anyhow?

Brain Cells, a form of Brainiac that wants to protect Metropolis from Jon. Jon wants to get Metropolis back, and Kara Jor-El is pissed at both of them. It’s weirdly a problem of everyone having the best intentions and screwing up epically. Well, not Kara. She’s the only one with a perfectly reasonable response to her nephew shrinking down an entire city, and then a supervillain flying into space with said city.

Of course, we know that Metropolis is going to be okay, thanks to Superman/Wonder Woman #1, back in week two. So, it makes sense that in Superman of Metropolis #2, we’d see the return of the city. It’s a beautiful page too: 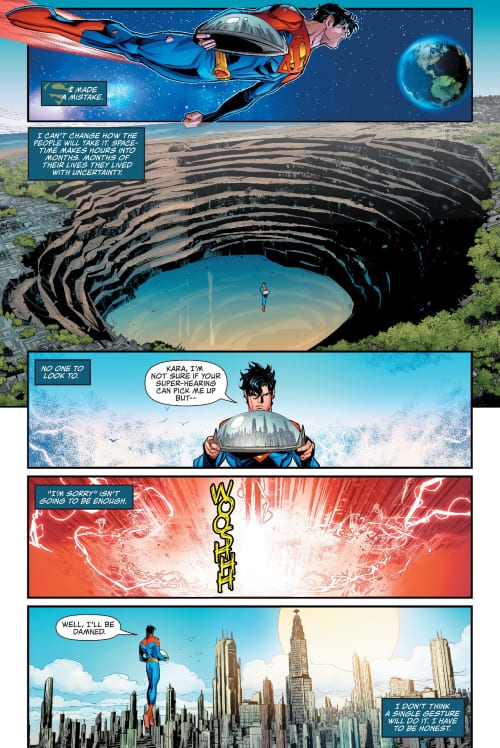 But from here, we see Superman help rebuild the parts of the city that suffered shrinkage damage…wait, that sounds wrong. It’s not clear how much time passes, but when Jon pledges his loyalty to the city and apologizes, they all seem on board. On the one hand, it’s great to see Metropolis and Superman in a great relationship. However, since we only had two issues for this massive story, unlike The Next Batman and Dark Detective, both getting four, Lewis didn’t have the space to let the narrative breathe.

Kara-Jor El Is the Best Member of the Super Family. 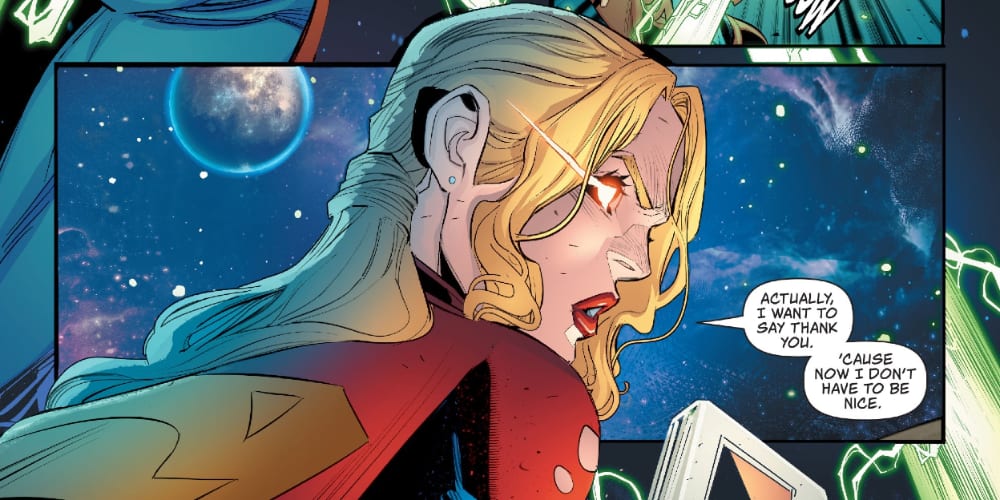 Something obviously sets Kara off between the end of Superman of Metropolis #2 and Kara Jor-El, Superman #1. In the latter, she’s on the moon, recovering from a rage-filled life. We see a glimpse of that rage in Superman of Metropolis #2. Of course, we’ve seen it before, too—in the New 52 era, she’s a Red Lantern for a bit. But she recovered from her Red Lantern days, and by Future State, Jon comments that an angry Kara is rare. So, what happens between now and later? And with just one issue of Kara Jor-El left, will we find out? As overstuffed as this event is, there are still more stories to tell. That’s actually the markings of a good event. 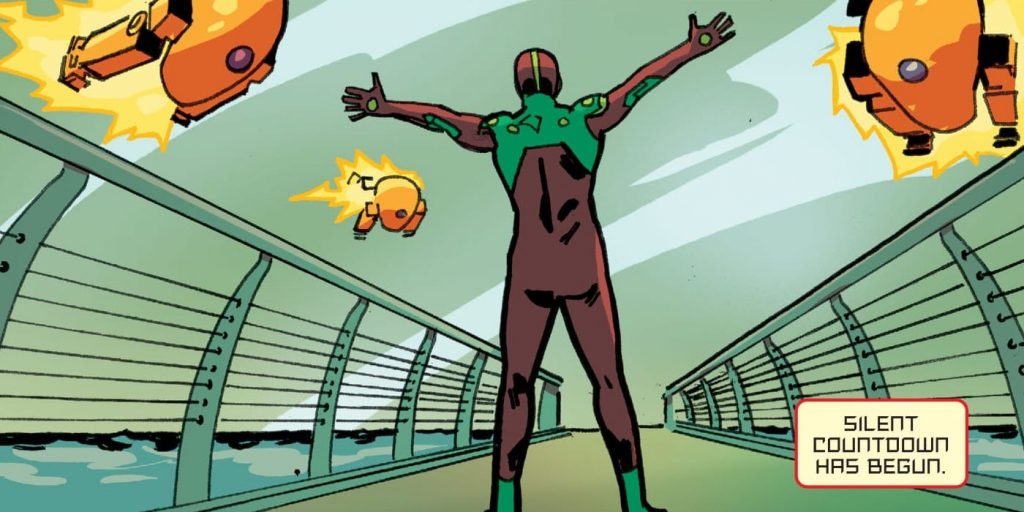 We can be heroes! For just…several more comics, check back next week. (Image: DC Future State: Superman of Metropolis #2, DC Comics)

In Superman: Worlds of War #1, Mister Miracle was resurrected on the war planet. But in Superman of Metropolis #1, he was trying to save the city after Superman shrank it down. So…what happened? We finally find out in Superman of Metropolis #2. Shiloh is still investigating the new barrier while evil robots from somewhere are trying to kill him. But to make matters worse, his Mother Box is on the fritz. He has to choose—try to use the Mother Box to penetrate the barrier or escape the robots.

Of course, he chooses to try and break the barrier, sacrificing “MB” in the process. Luckily, MB doesn’t completely die. But, as far as he’s concerned, the attempt was unlucky. In reality, if he did get past the barrier, he would be somewhere in space on Brain Cells’ ship. So he got lucky without knowing it. However, his luck runs out again, because. Though he took out the robots, one was still alive just enough to zap him and turn him into dust…hence why he was being resurrected on Warworld.

I love what Easton does with the new Mister Miracle. Yara might be witty and amazing, Tim Fox might be a badass, but Shiloh is just a fun character. But Shiloh’s not a hollow character either. Generally, it’s difficult for some writers to make a developed character without making them overly-jaded. Shiloh has an innocence about him that makes him a rare superhero. He’s not trying to chase down his own demons. But, then again, he’s now on Warworld, so that demeanor might change. What Easton did right was introducing us to the character before he goes through utter hell. 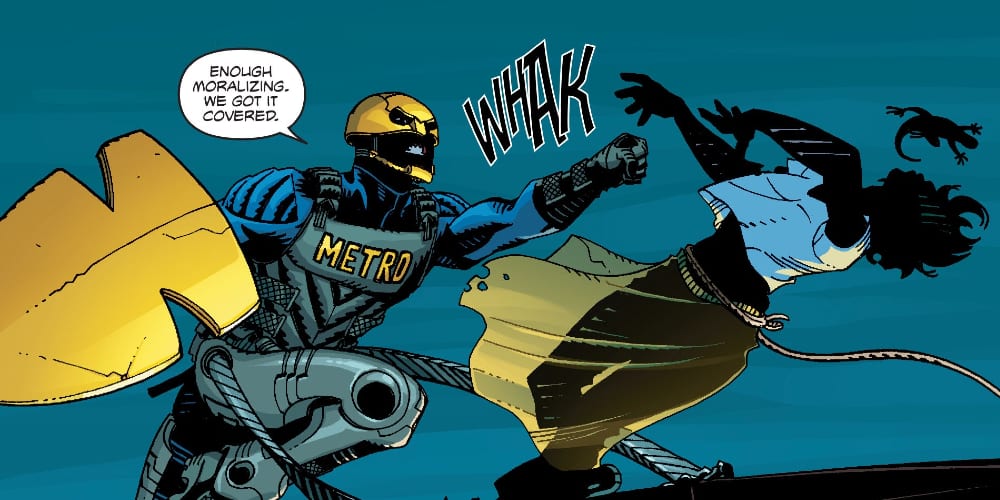 It looks like he’s hitting that woman, but he was actually after that gecko. The Gecko of Evil! (Image: DC Future State: Superman of Metropolis #2, DC Comics)

I really hope we see more of the Guardian after Superman of Metropolis #2, because Sean Lewis really sold this character well. Unquestionably, through the crisis Superman put Metropolis in, he’s proven to be the best hero they have. But there’s no reason why that should change with Superman’s return at the end (again, people were cheering, which is just odd). Even Jimmy Olsen calls him his “new best pal,” which was previously reserved for Superman. Basically, Jimmy’s like, “lose my number Supes, I got a new beau.” That’s what the kids say, right?

Additionally, from the first story in this anthology, we learned a horrifying fact. Even though Jon only had the city in glass for a couple of days, because Brain Cells took them to space—where time works differently, for them, it has been months. While Kara, Jon, and Brain Cells all fought over them for like ten minutes, weeks passed by in the dome where the villain Honest Mary terrorized the city and nearly killed Olsen.  She actually does succeed in blowing up the Daily Planet right before Jon returns. So, you know, awesome timing.

Superman of Metropolis…Needs to Face Consequences 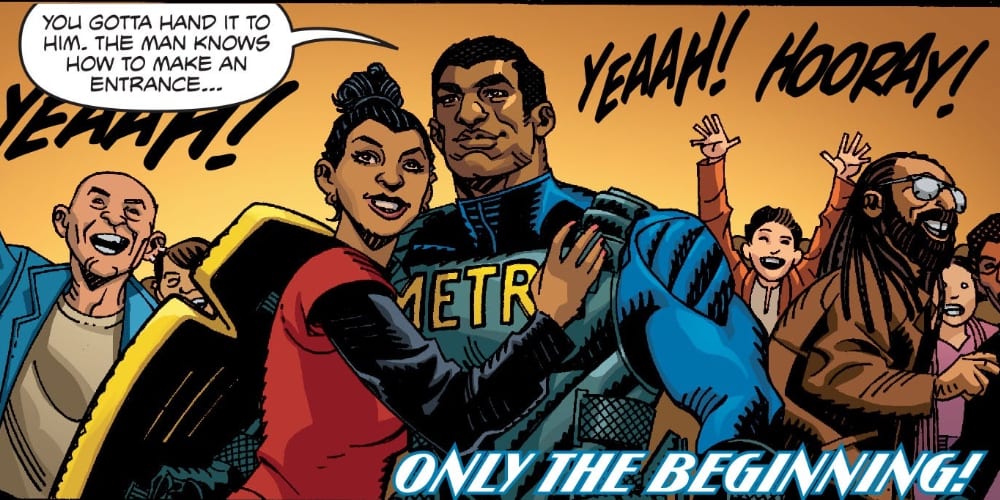 He almost killed all of you! Didn’t anyone notice that? I feel like I’m taking crazy pills. (Image: DC Future State: Superman of Metropolis #2, DC Comics)

At the end of Avengers: Age of Ultron, it looked as if the world was all for the Avengers again, even though Iron Man unleashed a murder-bot on the world, and he and the Hulk destroyed several blocks of Johannesburg, South Africa, during their battle. They even seem perfectly fine with the Scarlet Witch being an Avenger, despite teaming up with said murder-bot like eight hours earlier. But in Captain America: Civil War, we learn that this isn’t true, and it took just one more incident for the world’s powers to decide they had to do something.

To repeat, Jon Kent bottled an entire city, making it spin into chaos. Because of his actions, the Daily Planet is basically rubble, and Miracle Man died. So, returning to instant love and adoration is a bit much. It’s another reason why this series shouldn’t have ended in Superman of Metropolis #2. The story was far too rushed. Jon did nothing to earn back the love of Metropolis. But it’s a short event, so creators need to take some shortcuts. And, regardless, in the end, the entire Shrinking Metropolis saga was excellent.

Our oh so handy checklist.