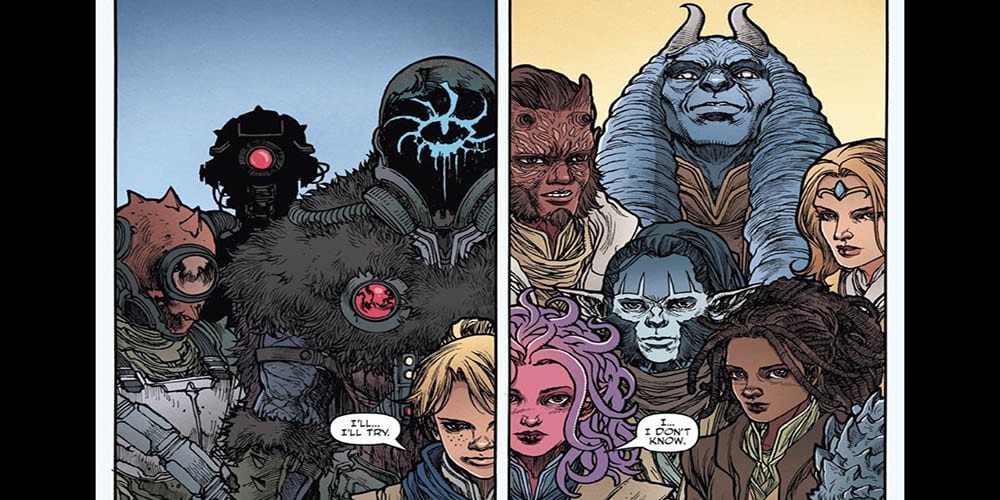 There’s something really really wonderful building in Star Wars: The High Republic Adventures. The series might cater to a younger readership, but I’m probably enjoying the story as much as any of the High Republic releases so far. The conflict playing out interpersonal with two of our young characters is pristine Star Wars storytelling. Not to mention, the series’ gorgeous visuals appear to only improve week to week. There’s a lot to unpack in a somewhat uneventful third issue, so here’s our review of Star Wars: The High Republic Adventures #3. Spoilers moving forward: we will be talking plot points for the latest issue. If that’s not something you want to read, then come back after you check out #3!

The Deceptive Decline from Hurt to Anger 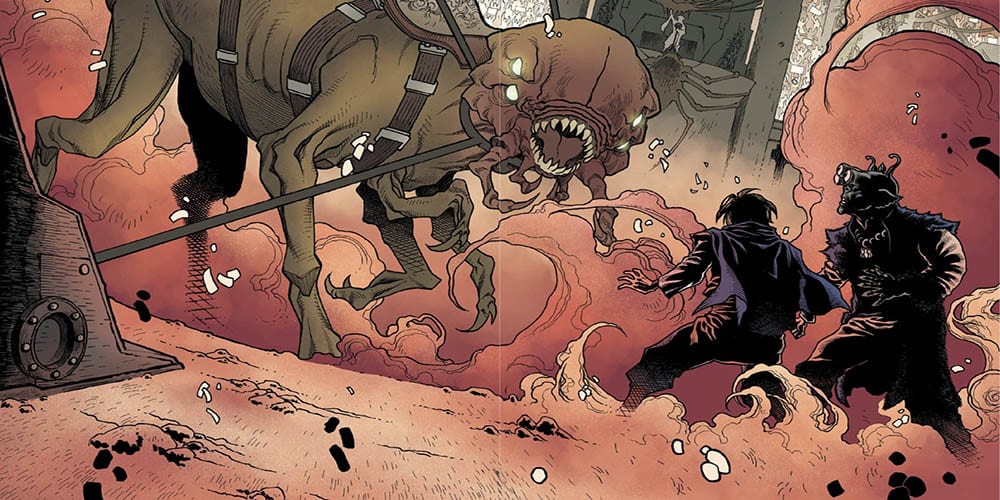 Man, oh man. I’m still reeling over this latest issue of The High Republic Adventures. In my Star Wars: The High Republic Adventures #2 review, I mentioned the effectiveness of exploring the new era of Star Wars through our teen trio of characters. In the latest issue, we kick off with Krix and Zeen exchanging holoprojector messages. Zeen tells Krix a tale of belonging. The young force-sensitive girl feels more at home among the Jedi than she ever did on Bralanak City. She confides in Lula, the young Jedi she’s befriended, that it’s tough not being with her friend from home. Despite this, the Jedi continue to try and make her feel at home.

Meanwhile, Krix isn’t necessarily hating his time with the Nihil, but it’s not great either. The Gaze Electric’s ominous sense of doom is only feeding his anger with Zeen. He doesn’t understand how she could be a force-user and not tell him. He doesn’t understand her anymore, and that’s leading to a lot of mixed feelings. In Krix’ inner monologues and holo-messages, we hear familiar tears in his heart that we recognize from the Star Wars franchise. He’s hurt by his friend, but that hurt isn’t leading to forgiveness. The pain is guiding him towards hateful disassociation from the people around him.

We see this firsthand when he frames his homeworld companion Elder Tromak, a father figure to him, to stay out of danger. When the Nihil leader Marchion Ro finds the holoprojector, Krix quickly blames Elder Tromak. The Nihil plan to feed him Tromak to the Bogaranths and the father figure is blindsided by this sudden betrayal. As for Krix’s savage action, he learns a lesson in getting even. 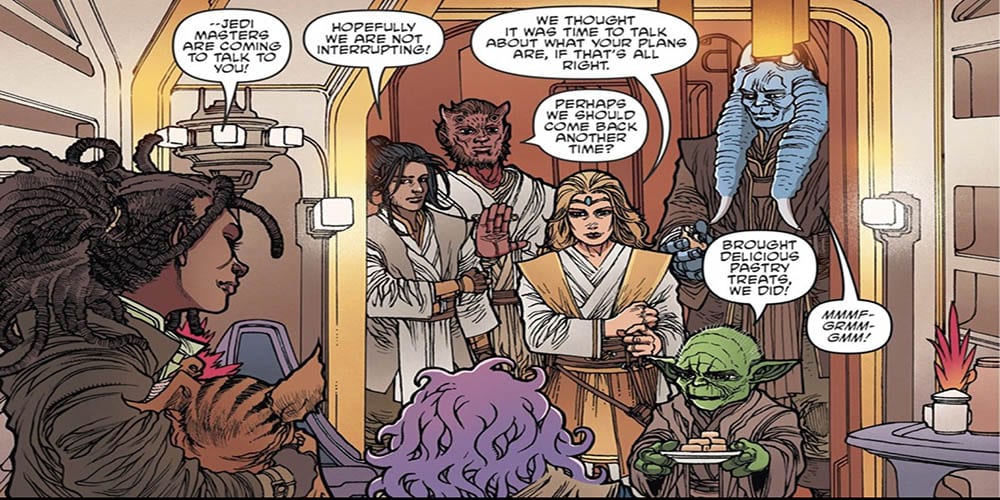 We discover via Zeen’s conversations with the Jedi aboard the Starlight Beacon that Yoda gave Krix the holoprojector. He had a feeling that he’d reach out to Zeen at some point. Yoda also predicted that Zeen would respond to her friend. Yoda’s okay with this, however, because they now have the location of the Gaze Electric. A gorgeous page split shares the final plot points between the two opposing parties. On the one hand, the Nihil are convincing Krix that his friend set him up to get killed now that she’s with the Jedi. Yoda and the others, meanwhile, are telling Zeen that she needs to get him to send one more message for them to secure the location of the ship.

Both young characters are being asked to do something they’re not totally comfortable with. On the final page, we see Zeen say she’s not sure if she can do it. Krix, on the other hand, says he’ll try to lure the Jedi closer to helping destroy them for the Nihil. These young kids from a relatively nowhere planet are now at the center of a galactic conflict. They’re both confused, hurting, and unsure of what will become of them. It’s a masterful issue in a series I’m enjoying a ton. The divide in Krix is especially interesting to me moving forward. We’ve seen neutral characters let the dark side get the better of them. Will he give in? I’m ready to find out more next month!