Snyder And Daniel Nocterra Is The Next Massive Indie Epic 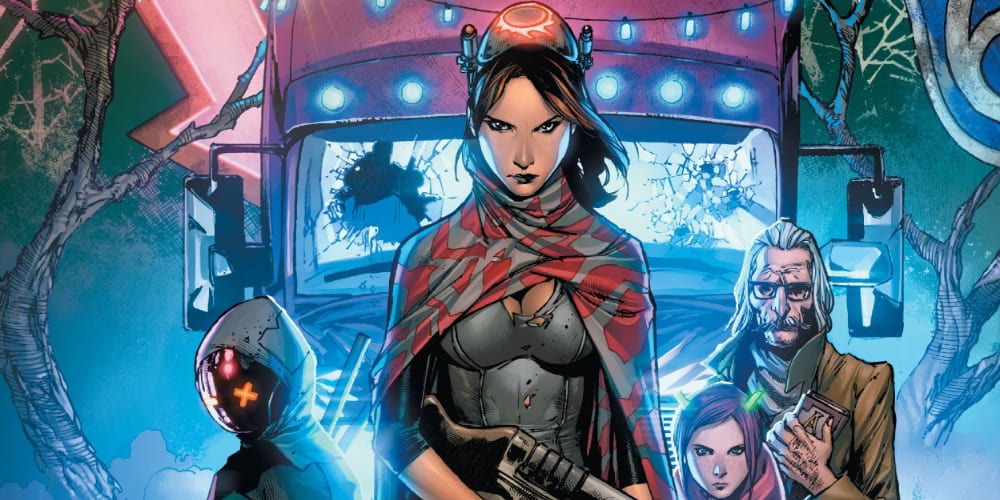 After steering the DC Universe with events like Dark Nights: Metal and putting DC on the road to Future State, Scott Snyder is taking a much-needed break from the superhero opera storytelling. But that doesn’t mean he isn’t working. Instead, he’s working on two indie comics. The first is the hit Undiscovered Country with co-writer Charles Soule. But more recently, his epic collaboration with acclaimed artist Tony S Daniel hit the market. Indeed, Nocterra could be the best work of both Snyder and Daniel. The first two issues are simply masterful. 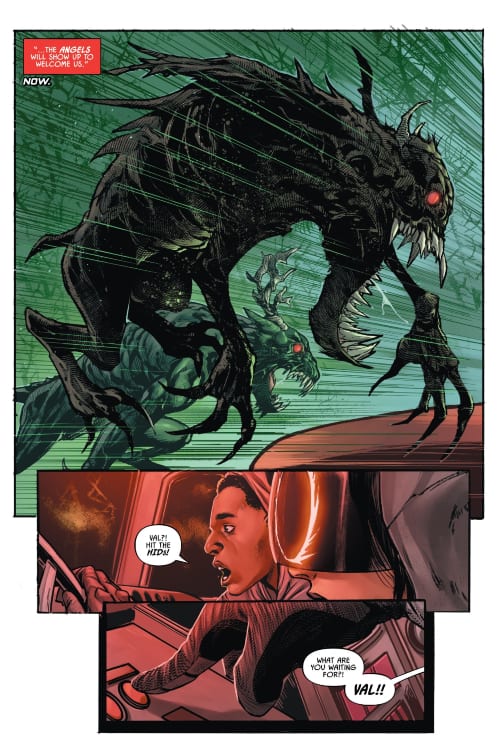 Is it bad that I find that creature kind of cute in a “that dog is so ugly it’s kind of cute” way? (Image: Nocterra #2, Image Comics)

Nocterra is very vaguely reminiscent of Roxanne Gay’s The Sacrifice of Darkness. Both stories explore a world plunged in darkness. And that’s as far as the similarities go. Gay explored finding beauty in the darkness. In Nocterra, Snyder and Daniel explore everything terrifying about darkness. Because in this world, it’s not just that the sun went out and darkness covered Earth; the darkness is also changing every living thing on the planet into something horrifying: the shades.

But then there’s the landscape of Nocterra, where Daniel brings the world Snyder dreamed up to incredible life. The “outposts” and “ports” are stunning. Daniel and his art team utilize the dark and how survivors use light in twisted yet beautiful ways. For instance, the Neon Grove: 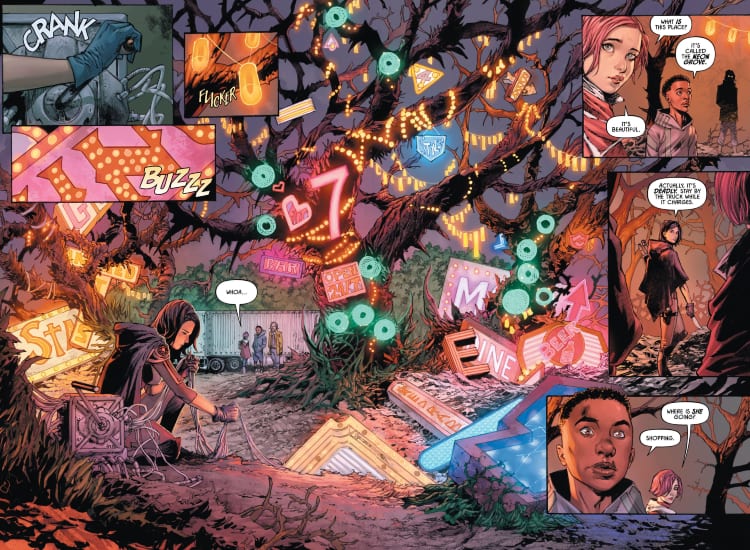 What’s even more wonderful is knowing that this is just the first port we’re seeing. Since this is a road trip, we’ll get to see Daniel create even crazier places for Nocterra. The art is incredible, from the locations to the creatures, to the surviving humans. But what makes a great comic is both art and story. As such, Snyder brings as much to Nocterra as Daniel brings with his art.

Snyder and Daniel expertly Introduce the Sundog Convoy, the Heroes (Maybe) of Nocterra 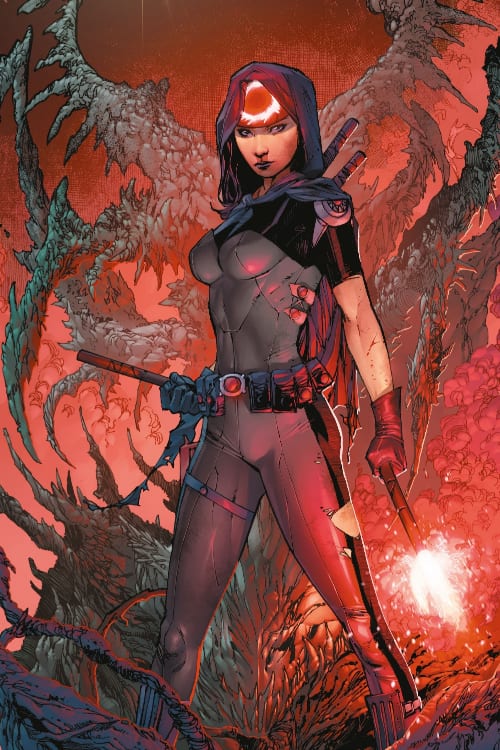 The last time my ex gave me that look, she became my ex. (Image: Nocterra #2, Image Comics)

Firstly, we need to talk about the main protagonist, Val Riggs—AKA Sundog. She’s going to be everyone’s new favorite heroine. It’s not just the fact that she’s a complete badass. She’s like Furiosa and Black Widow somehow had a baby together. It’s not her tough attitude. We have plenty of “tough chicks” in the world of comics, sci-fi, and fantasy. But Sundog’s best moments are when she’s being a big sister to her little brother Emory. The two take care of each other, but she is still a big sister.

What also makes her an interesting character is her own story. We learn in the first issue that Val was blind for her entire childhood, until she had a surgery that gave her sight. It terrified her. But to make it worse, twenty-three minutes after she gained the sense of sight, the world went black. Talk about a trick of cruelty. However, she is most prepared for the Big PM world Snyder and Daniel built in Nocterra.

Then we have a wonderful cast of characters. Emory straddles the line between jaded and optimistic. Augustus has that classic “you’re hiding things from us” nature, even if he is a doting grandpa. And his granddaughter, Bailey, is the type of young character we’ll get to see develop into someone entirely new. But for now, she’s just a caring child.

However, we also need to discuss the villain…because he is far more terrifying than any of the creatures.

Blacktop Bill is a Force to Reckon With, and the Sundog Convoy’s Darkest Problem. Literally. 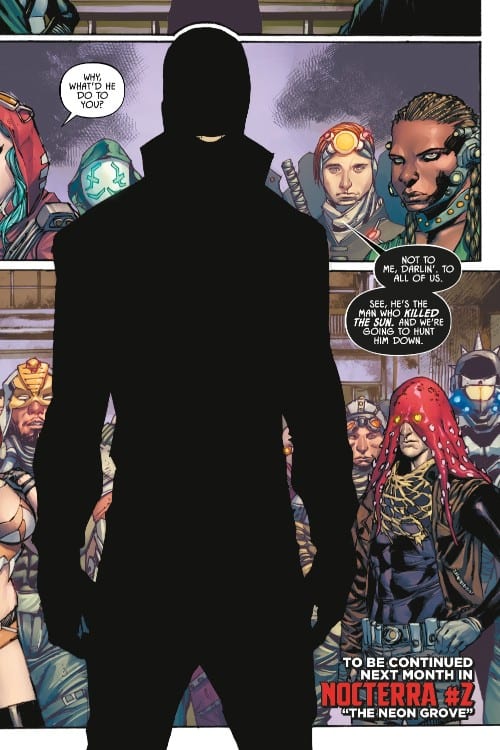 That’s Blacktop Bill, a bounty hunter tracking down Augustus and Bailey. He bonded himself to “a matrix of carbon nanotubes,” which gives him some incredible powers. Aside from appearing as a black void, he can also burn your face off with just a touch. Or make your truck blow up with just a touch. So, yeah, he’s powerful. He’s also obviously insane and necessarily mysterious. We don’t know if he’s right about the old man killing the light, but the fact that he wants to kill the child as much as the grandfather kind of takes any chance of heroism away. Although, somehow, on Game of Thrones, Jamie went from a villain throwing a child off a building to being one of the heroes in the battle against the nightwalkers. So, maybe that’s not too much of a hurdle to jump over.

I’m always excited for a new awesome series. Good premiers, even great ones, aren’t hard to come by. However, an amazing debut is a lot harder to find. What Scott Snyder and Tony S Daniel accomplish in Nocterra is definitely amazing. I haven’t been this excited for the next issue since, at the least, Sonata – but I could even go all the way back to Saga.

The first two issues are available now. The third issue is not available soon enough.