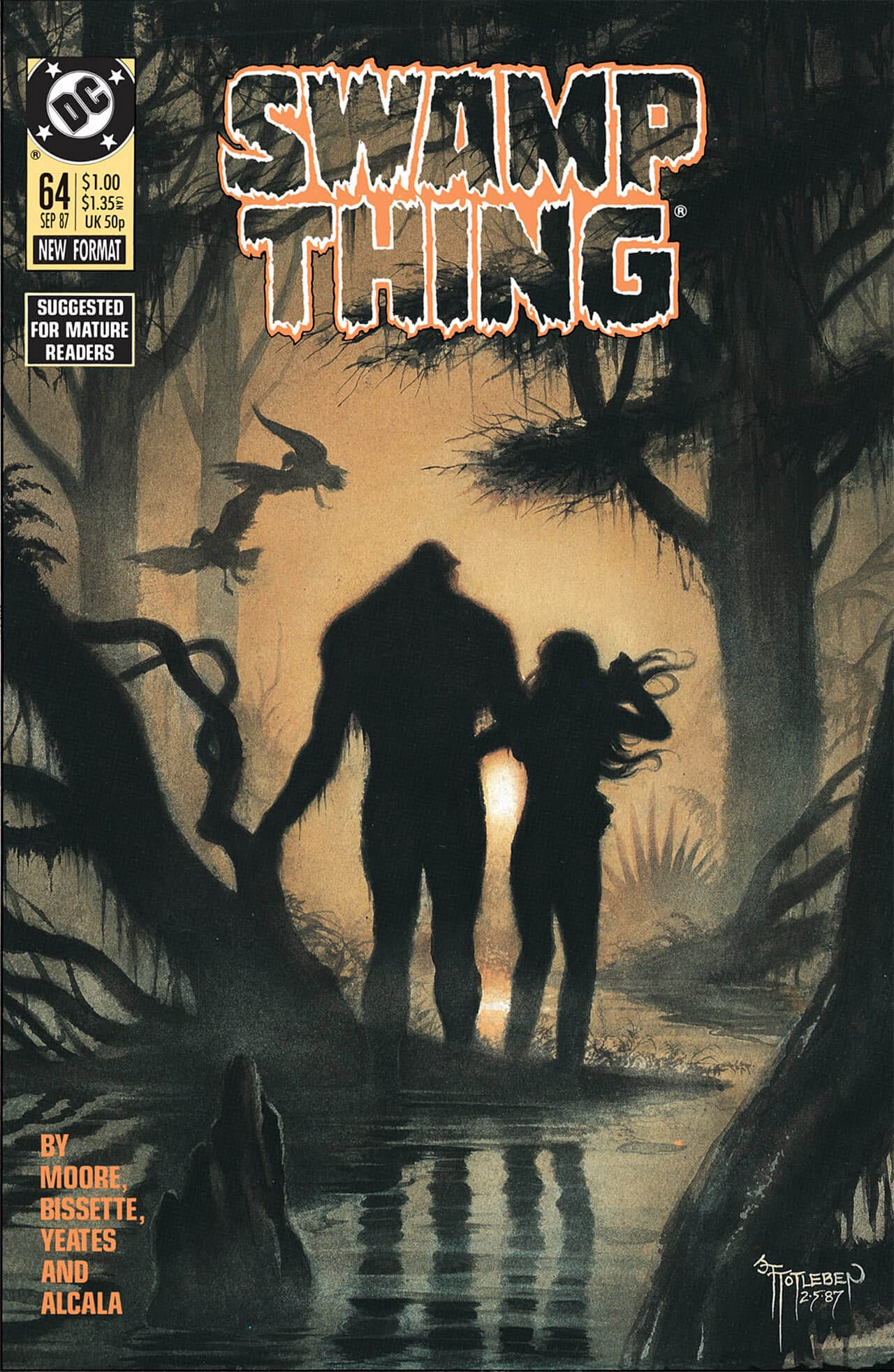 Alan Moore Saga of the Swamp Thing, his first critically acclaimed comics, is an intense read. Every issue is packed with massive ideas and massive emotions to match them. He gets into themes of separation anxiety, the nature of power vs tranquility, and the prejudiced treatment of “non-traditional” couples. It is a heavy series, even more so than the first three volumes. However, there is one major difference. While books one through three had a lot of single-issue stories, books four through six have more solid stories that go for several issues at once. It’s a welcome change of pace. But just because the format might be smoother doesn’t mean that the Alan Moore eases up the drama in the ongoing saga of the Swamp Thing. In fact, it gets pretty grim for our moss-covered friend.

Here’s something I didn’t expect: Swamp Thing crosses over with the mega-event Crisis on Infinite Earths. It’s a brief crossover, but an important one nonetheless. Constantine needs Swamp Thing alive. The Crisis may be averted, but Alan Moore uses it to set up the biggest story in Saga of the Swamp Thing yet.

John Constantine Has a Plan

It’s just a really crazy, freakish plan that relies on Swamp Thing not freaking out in the face of a void that will destroy all of reality. For the past few issues, Constantine has been sending Swamp Thing on various supernatural missions in order to prepare him for the big one. This storyline was a great introduction to Constantine. We see his antihero sides, his bastardly charm, and his pained decision-making. He knows that he is sending people to die, including an old fling, Zatanna, along with her father. So, while Constantine is on Earth challenging magical energies, the even more magical characters are on the frontlines facing Darkness on the shores of Hell.

Swamp Thing and the Wisdom of the Parliament of Trees

How do you defeat a spreading darkness that is the core of all evil? Throughout the battle in Hell, Etrigan the Demon, The Phantom Stranger, Doctor Fate, and the Spectre all fall to the darkness after trying to explain to it how evil it is. Before going to battle, however, Swamp Thing met with the Parliament of Trees for the very first time. The Parliament consists of every Swamp Thing that came before Alec Holland. And their advice doesn’t really make any sense: 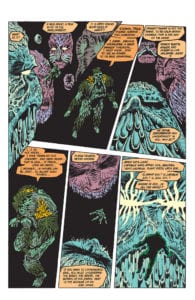 Of course, when all seems lost, Swamp Thing finally realizes what they mean and enters the darkness to talk about the nature of evil or the lack thereof. It’s just a short conversation: 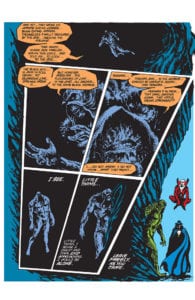 And that’s how Swamp Thing saves the universe (after the Crisis nearly destroyed it in the first place. They need to be more careful with their universes). Alan Moore created some of the most complex superhero stories of all time, but as much as V for Vendetta and Watchmen both enter some fascinating ideas of ideology and psychology, these two pages in Saga of the Swamp Thing might be the most meaningful in his entire career.

So, Swamp Thing finally realizes that he need to stay balanced and focused, keeping control of his anger. Most of all, true power is not found through anger, but through peace. All is good with Swamp Thing and he has no need to ever abuse his powers. He will live in peace in the green, tending to its need only when absolutely needed and never acting selfishly.

For about five minutes.

Moore’s work has always been deeply political, but as far as his early work goes, he’s never had this much confidence. And what does he want to tackle head-on? Non-Traditional marriages, which, at this time, would primarily be same-sex marriages. However, it’s important to remember that interracial marriage was illegal only a couple decades prior and still frowned upon. Moore uses the relationship between Abby and Swamp Thing to call bullshit on everyone against a strict marriage code.

Taboo Love in the Swamp

One of the most important narratives in the Alan Moore Saga of the Swamp Thing is the epic romance between Abigail Arcane and Swamp Thing. Not only did they figure out how to get freaky, but they have the most stable relationship in the DCU. They just love each other. It’s kind of refreshing. Despite all the crap thrown at them, they just work. Unfortunately, a tabloid paper acquires pictures of Abby and Swampy together. At the time, Swamp Thing was fighting the great darkness and wasn’t available to help her when she was fired from her job and arrested. She’s labeled a sex criminal. By the time Alec returns to the Swamp, Abby tried to escape and winds up in the custody of Gotham PD awaiting an extradition trial back to Louisiana. And that’s when Swamp Thing learns how the world sees their relationship. Remember how the Parliament of Trees were like “be mellow, dude. Anger is dangerous?” Well, Swamp Thing gets angry. And you’re gonna love him when he’s angry.

How Swamp Thing Bests the Batman

Swamp Thing arrives in Gotham and has one simple request: let Abigail Arcane free or he will destroy the city. So what does Commissioner Gordon, the Mayor, and Batman decide? Not to release her. Then this happens: 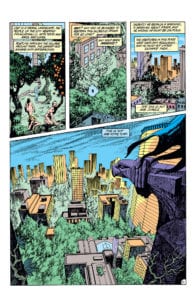 Batman being Batman thinks he can defeat Swamp Thing and restore Gotham, so he attacks the big green meanie head on, and well, this happens: 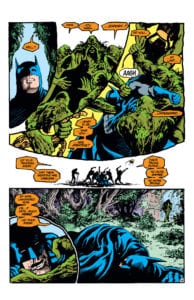 Yeah. Swamp Thing beats the Batman and takes over Gotham in less than a day. Ra’s Al Ghul couldn’t do it for a hundred years. Then again, Ra’s isn’t god-level. For the most part, Batman has always been pragmatic—even if now he can solve any problem. Here, he looks at what Swamp Thing is capable of and decides…nope. He knows there is no winning this fight with any of the tools at his disposal, so he suggests that they release Abby. As he does, he makes a point. There are many inter-species relationships, and plenty of sentient aliens on Earth with free will, most of all, Superman. It’s this that finally gets the Gotham mayor to realize he was acting like an asshole get Abby a pardon. Finally, after such a harrowing few months, they can be reunited.

The Cost of Swamp Thing’s Anger

At this point in Saga of the Swamp Thing, it’s hard to imagine where Alan Moore could possibly take this character. He’s been a supernatural superhero, he fought in the pits of Hell—twice. He went to war with Gotham City itself. Where can the saga possibly go next? The answer is simple: Lex Luther. The Parliament of Trees warned Swamp Thing that if he acted in anger and abused his power, there would always be consequences. The universe always finds balance. While Swamp Thing was turning Gotham into Eden, Lex Luthor spent ten minutes coming up with a solution. In that ten minutes, he created a weapon that would scramble Swamp Thing’s psionic wavelengths, cutting him off from the green. Once they do that, unknown enemies drop napalm on the Avatar of the Green. He can’t connect to the Earth—and so in front of Abby, he burns to death.

Or so it seems. Instead, his spirit launches into the universe and finds the first place it can merge. A planet that is entirely blue—somewhere in the universe. As Abby mourns back on Earth, Swamp Thing is about to start the next stage of his saga.

Hand it to Alan Moore to take an elemental of Earth and remove him from Earth. Book six in the saga of the swamp thing is by far the strangest. Swamp Thing helps the people of Raan and Adam Strange fight a deadly plague that has caused mass infertility, which leads him to the next stage of his journey—a planet with a sentient plant population. But along his journey to be reunited with Abby, some really strange things happen. For instance, a conscious mechanical planet captures his essence and rapes his soul to impregnate itself. And if you are wondering if the entire issue looks like an acid trip, you’d be correct: 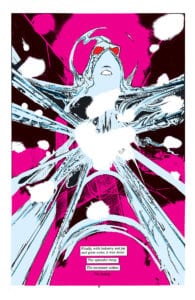 When Swamp Thing finally reaches the planet of plant people, he becomes a monster. He didn’t consider what would happen if he tried to merge with plants that were already sentient, and the effects are horrifying. The population fuses together, all of their thoughts merged and mingled, drowning Swamp Thing out. It’s only when the Green Lantern of that world intervenes that everyone is saved. 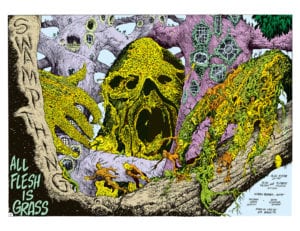 I think I see our editor, Joshua Patton in there! (DC/Veritgo Comics)

But eventually, he makes his way home.

The Revenge of the Swamp Thing

Yes, he wants to see Abby, but first he wants to kill everyone involved with his murder in Gotham. And he goes about it quickly and viciously. He kills his first victim by taking over a bouquet of roses: 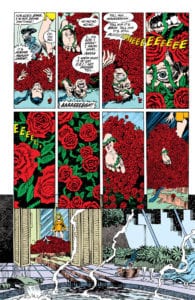 As Abby reminisces about her time with him, Swamp Thing is busy killing the people who took him away from her. And the guy in charge? Mr. Wicker, who hired Lex Luthor? Well… 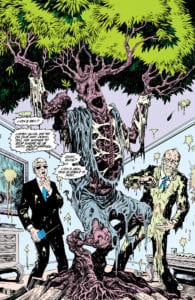 So many splinters in the wrong places. (DC/Vertigo Comics)

The series end in a way I never thought Alan Moore Saga of the Swamp Thing would end his series. It’s…happy. I could write an another five hundred words about the significance of letting Swamp Thing and Abby go off into the sunset hand in hand, but nothing I say can top this image: 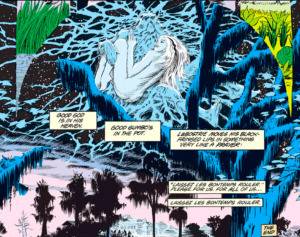 Alan Moore’s Saga of the Swamp Thing truly is one of the best runs ever. I just never expected for a series about a swamp creature to be so emotionally dense.

Also, check out this fantastic interview with Alan Moore talking about Swamp Thing.