Paper Girls Adaptation In The Works By Amazon - Comic Years

Home » COMICS » Paper Girls Adaptation In The Works By Amazon

Paper Girls Adaptation In The Works By Amazon 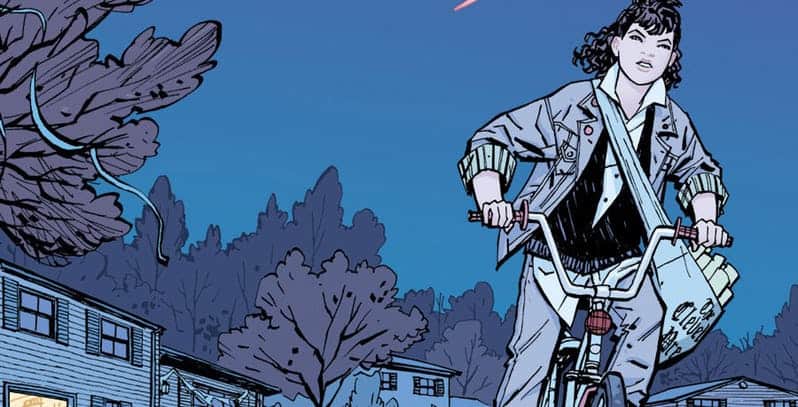 We’ve all gotten used to seeing books being made into films by now. Sometimes they’re wonderful and stick to the source material, and other times they just can’t live up to the fantasy world that the authors created. It’s hard enough turning books into movies, but after all that Marvel and DC have produced, we’re in an age where comic books are being adapted just as often. With The Streaming Wars ongoing and rival streaming services searching for the next big adaptation, Amazon Prime Video has just announced that a Paper Girls series is in the works, in collaboration with Legendary Television and Plan B.

Published by Image Comics and written by Brian K. Vaughan (with co-creator Cliff Chiang), Paper Girls is a science fiction story following four young girls, beginning in the late 80s. These girls are, as the title suggests, paper delivery girls. On All Saints Day, the girls assemble and work their regular route in their hometown in Cleveland. Since it’s the day after Halloween, it’s the perfect time for a mystery to strike. They’re chasing a group of teenagers for a stolen walkie-talkie, and find themselves in the presence of a time machine. And these teenagers? Yeah, they’re not just regular teenagers. They’re time travelers.

The girls end up involving themselves in “The Battle of the Ages”, where they help the teenagers/time travelers fight against the “Old Timers”. They end up turning into time travelers themselves, traveling to both the past and the future. It becomes not just a fun story of time-displaced war, but one of self-discovery and friendship. The girls find themselves dealing with problems caused by their future selves, and navigating the difficulties of growing up after meeting their grown-up selves.

Time travel stories have always been popular (time-heist, anyone?), but are at risk of becoming overdone. This concept, though, is pretty fresh. And, with all of the hype surrounding Stranger Things, audiences do love watching the shenanigans that only kids can get up to. That, mixed in with the fun nostalgia powers that the 80s can bring, means this is certainly an adaptation that we’re excited about. With so many different eras that the girls will travel to, the storytellers will be able to have fun exploring different interpretations of the future and past.

So, Who Is Behind It?

Stephany Folsom is a newcomer on the writing scene. With only a handful of credits to her name, most have never heard of her. However, one of these credits includes writing the story of the newest Toy Story film. Which means she has certainly proved herself to be capable of writing something with as wide of scope like Paper Girls. She is also working as a Consulting Producer for Amazon’s other upcoming series, the mysterious Lord of the Rings tale. Author Vaughn and Plan B will serve as co-executive producers along with Folsom.

While we wait for more announcements about Paper Girls’ adaptation, we’ll be busy re-reading the comics. The comics have been in monthly publication since late 2015, with the final set for release on July 31st, 2019. This means that Folsom will have the entire story to draw inspiration from in her adaptation.

How to Dry Clean Comic Books: Tips and Tricks
Stan Lee’s Final Cameo Is Not In A Marvel Movie