Nubia And The Amazons #1 Begins Wonder Woman: Trial of the Amazons 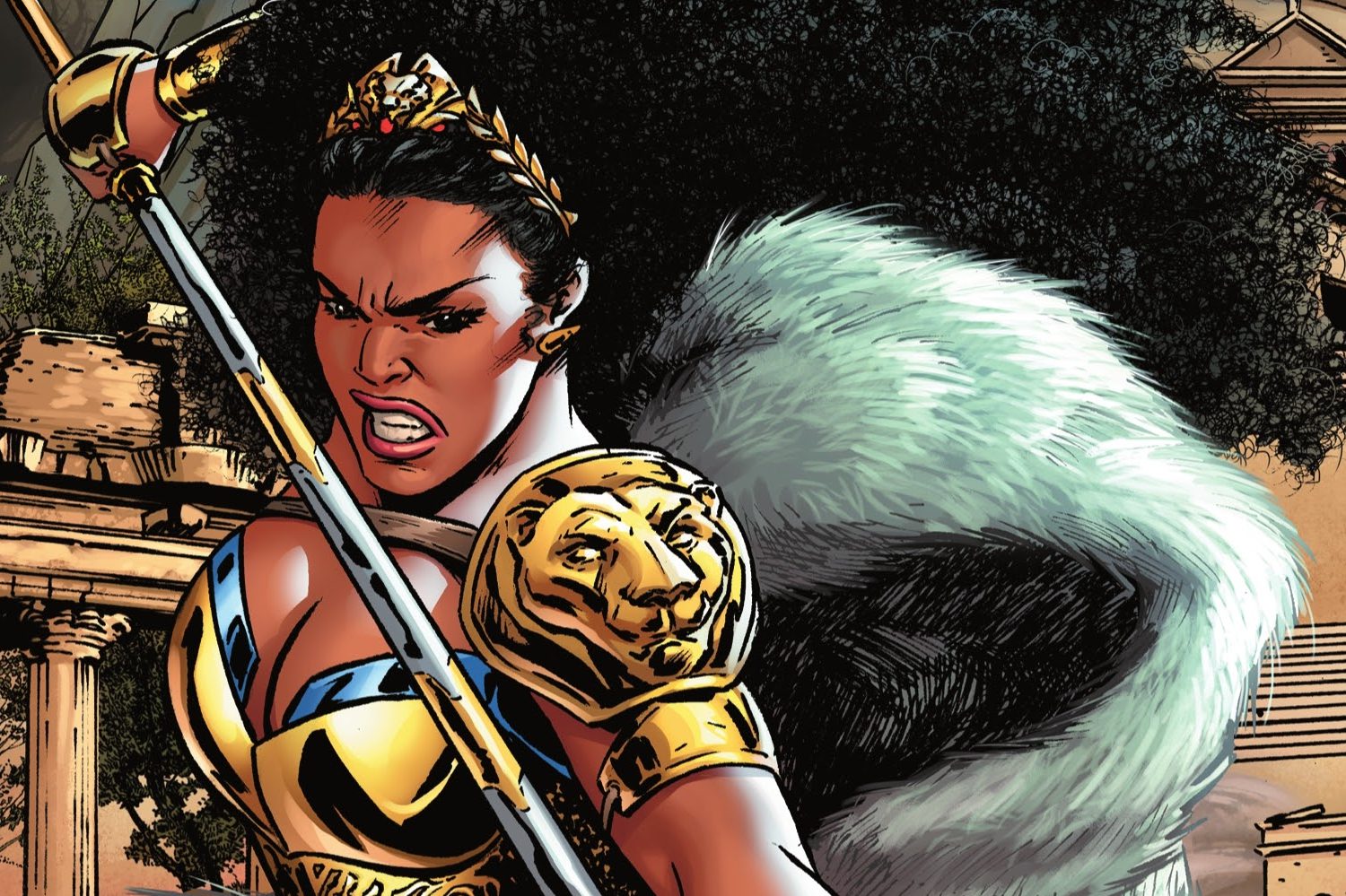 One of the many reveals during DC Fandome was an upcoming comic book event, Trial of the Amazons. Somehow, this is the first major Wonder Woman-centric crossover event. Sure, she’s been the main character in other events, most recently Dark Nights: Death Metal. But even Death Metal was a sequel to the Batman-centric Dark Nights: Metal event. The event has a great lineup of writers, including Becky Cloonan, Michael Conrad, Vita Ayala, Stephanie Williams, Joelle Jones, and Jordie Bellaire. But it all kicked off with this week’s Nubia and the Amazons #1, a brilliant comic that echoes generations of Wonder Woman stories. And if you didn’t fall in love with Nubia during Future State, you will now. 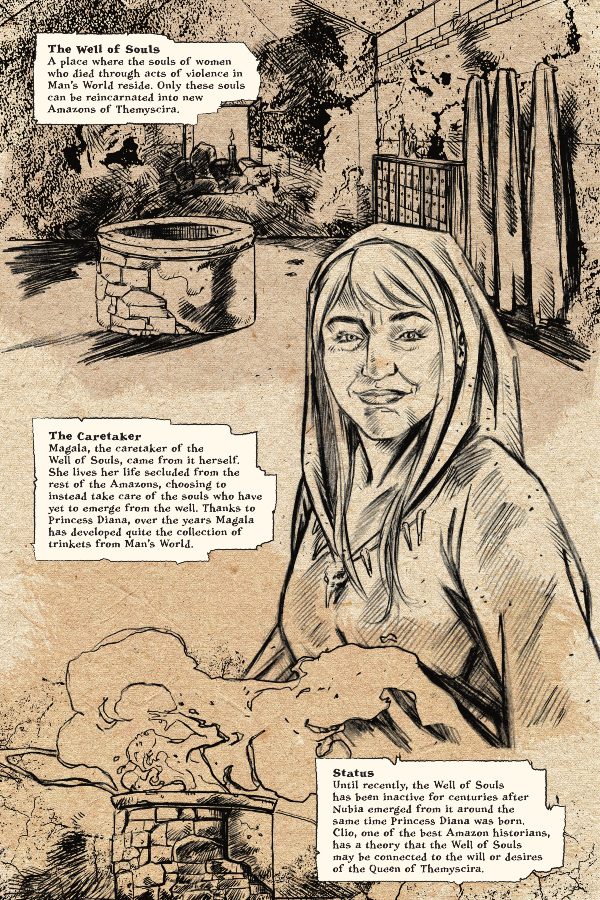 One of the most beloved texts in my Teaching Comics and Graphic Novels Guide is Wonder Woman by George Perez Volume One. The series starts with a horrific act of violence. In fact, it was the first time a man killed an innocent woman. However, her soul is reborn as the first Amazon of Themyscira. After the first Amazons appear, the waters granting them new life and new power become The Well of Souls. Nubia and the Amazons #1 begins with the Well. We see, in a flashback, Nubia pull herself out of the waters with no memory of her previous life. Queen Hippolyta greets Nubia, even though they just witnessed the first birth on the island: Princess Diana. However, the joyous celebration of Diana’s celebration and Nubia’s arrival is quickly cut short when the Well of Souls slams shut.

Immediately evoking Perez’s work is the most suitable way to set up what looks like the biggest event in Wonder Woman’s publication history. It’s a deep pull from the well of Themyscirian mythology. Even the writing style feels like Len Wein’s writing. But, on the other hand, this opening issue isn’t shackled to that classic run either. Instead, when we enter the present day, we see the new status quo of Themyscira…followed by that status quo shattering.

Nubia is the Queen the Amazons Deserve – But is She the One They Need Right Now? 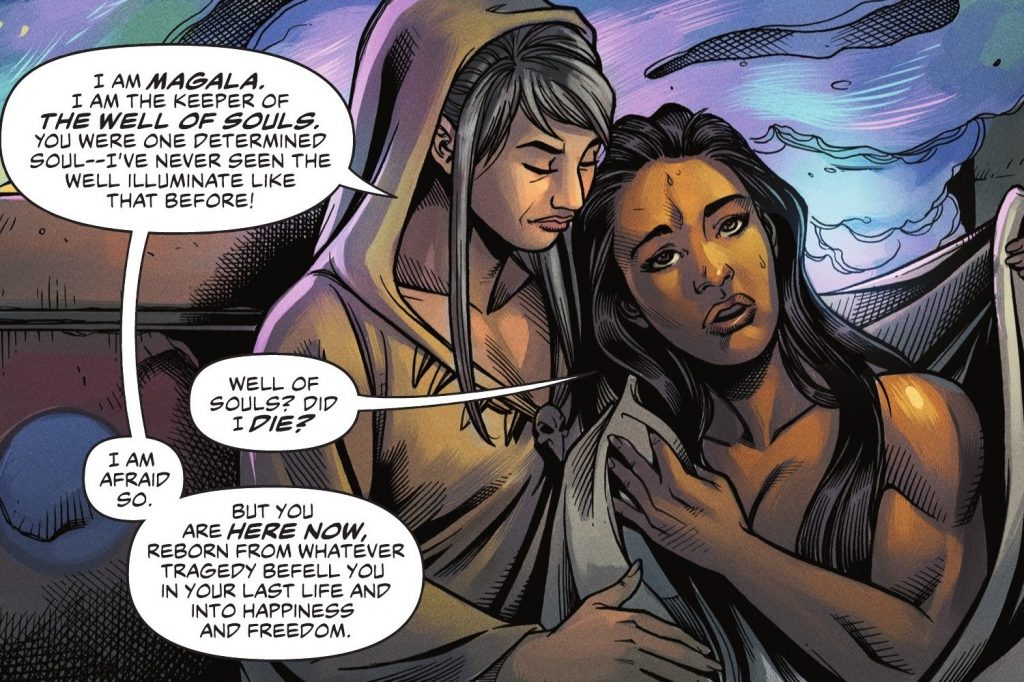 First, why is Nubia the Amazonian Queen? Lots of drama and Wonder Woman sort of ascending to something above godhood before rejecting it. Mostly, Queen Hippolyta appointed Nubia to lead the Amazons, and in issue #1, we see how deeply her subjects respect her. Nubia is compassionate, level-headed, strong, and patient. Perhaps too patient. She doesn’t rush any decisions, even if she should. She moves between being stuck in the past and stuck in the future.

So, when the Well of Souls reopens, she finds herself considering the past and future of Themyscira. Meanwhile, crucial things happen in the present, such as Doom’s Doorway, the one the Amazons have been guarding for eons, breaking out of its chamber. Considering how we see their first victim, it looks like this is one of the most powerful Greek gods/monsters ever written. I mean pure stone-cold evil. They leave people petrified.

The sign of a good leader we often see in their weaknesses, and in fiction, it’s what makes them relatable. Writers Vita Ayala and Stephanie Phillips make Nubia as impressive as Princess Diana but more authentic. Nubia is about to face her first major challenge as Queen of the Amazons, and surely she, the readers, and everyone in Themyscira will ask, “where the hell is Wonder Woman?” We don’t know yet (unless you’re reading Wonder Woman, of course). 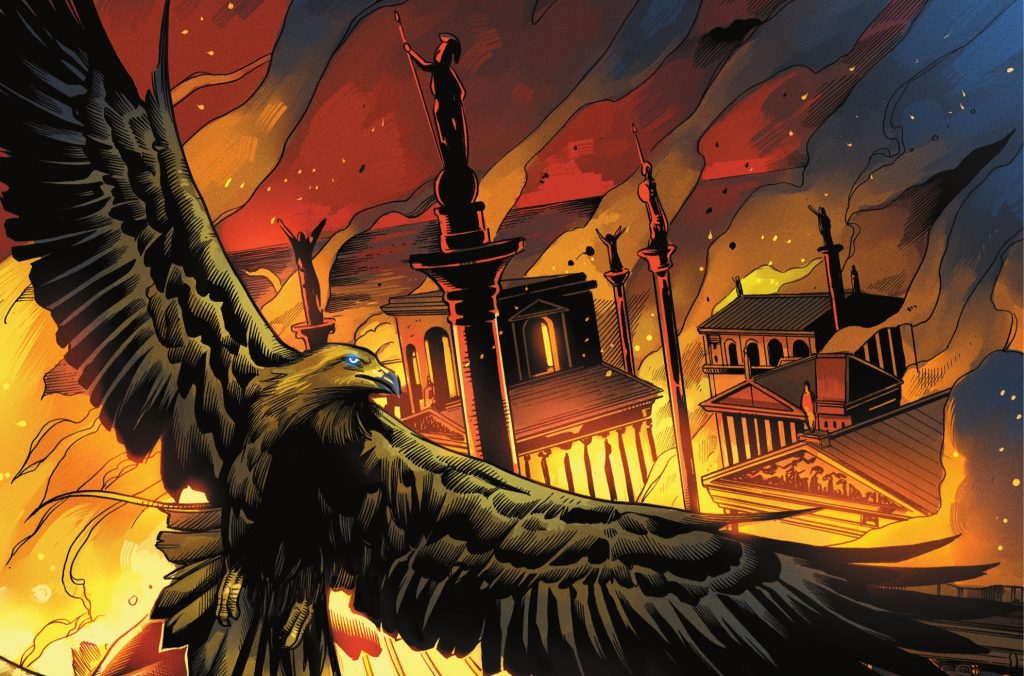 It feels fitting that over at Marvel this week, we got the first issue of Phoenix Song: Echo. It truly looks like the Phoenix Force laid waste to Paradise Island. The image above is just one of several images, each more devastating than the last. Whatever Trial of the Amazons ends up being, the word “trial” seems to take several meanings, similar to how it is in the current Trial of Magneto. There’s a legal trial, but another definition of “trial” is a period of suffering and anguish. Judging by the last few pages of Nubia and the Amazons #1, we should prepare more for the latter definition.

The debut works well as the start of a limited series and the beginning of a much bigger story. DC was light on the details, but if the event lives up to the promise Nubia and the Amazons #1 makes, it’s going to be an event to remember.

Nubia and the Amazons #1 is available now.