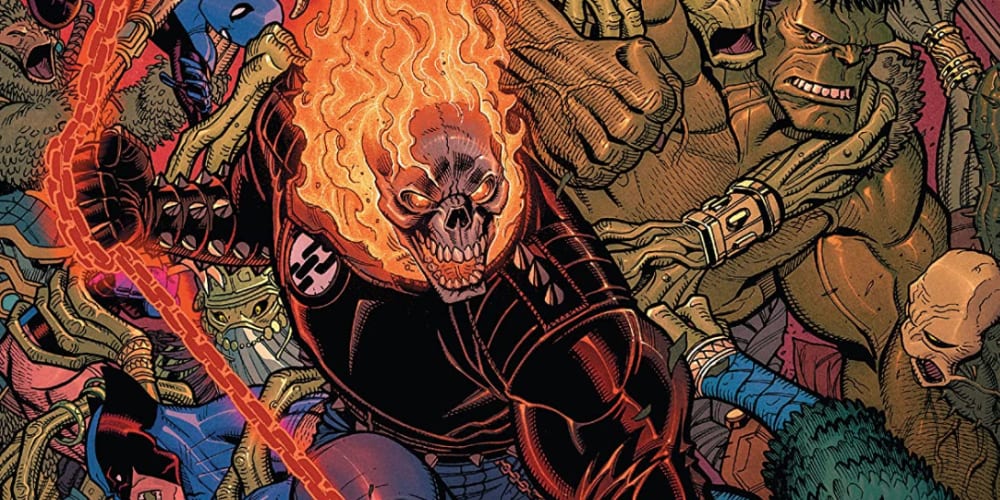 Marvel’s Empyre kicked off in July with a surprising first issue, but a shorter checklist than expected. With nearly half the tie-ins canceled, it makes the event more manageable, and thus easier to read. Still, there are a lot of titles, even if the event is smaller. To that end, SNL star Tarran Killam’s Spider-Man mini-series looks like it’s dead. So, if you want to get the full(ish) experience, you’ll want all 14 issues coming out next month. But here’s the August checklist for what is coming out for Marvel’s Empyre event: 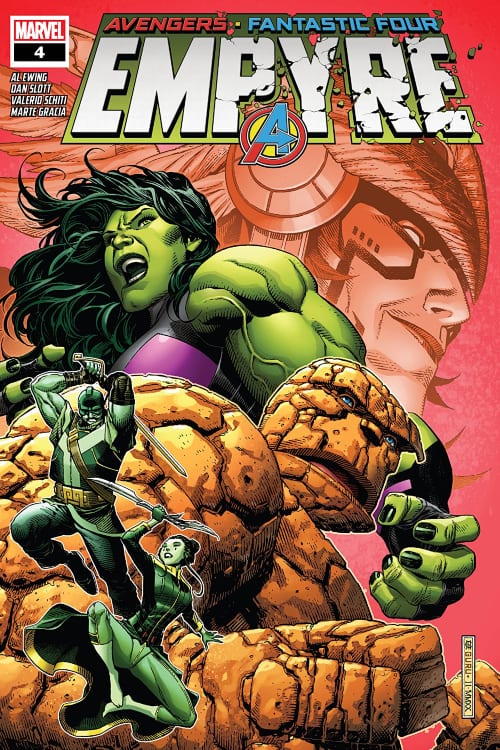 At this point, we’re already halfway through the main series. By the end of August, we’ll be nearing the end of Marvel’s Empyre (which will at least make September’s checklist really easy). So far, the big players are Iron Man, Captain America, Thor, and Reed Richards—though other characters had some outstanding moments. Ghost Rider demonizing the Quinjet will be a series highlight regardless of what comes next. Regardless, by the end of issue two, the Cotati have started their Earth invasion. But judging by the upcoming solicitations, expect Black Panther to take some of that focus.

THE GRASS IS ALWAYS GREENER…Tensions mount as the action heats up! As the attack on Wakanda intensifies, the heroes find themselves under attack from their enemies — and their allies! In a war where nobody can be fully trusted, betrayal cuts deep — as the alien invasion claims its first casualty! In this issue: The shock ending you never expected! You’ll want to frame it for your wall, True Believer

Love and war — in the midst of cosmic cataclysm! One fan-favorite Marvel hero reveals their secret — as another faces the ultimate showdown with a monstrous foe! Meanwhile, an outer-space jailbreak leads to a trial by combat you’ll have to see to believe…but is it all too late to save Earth from two world-ending threats at once? 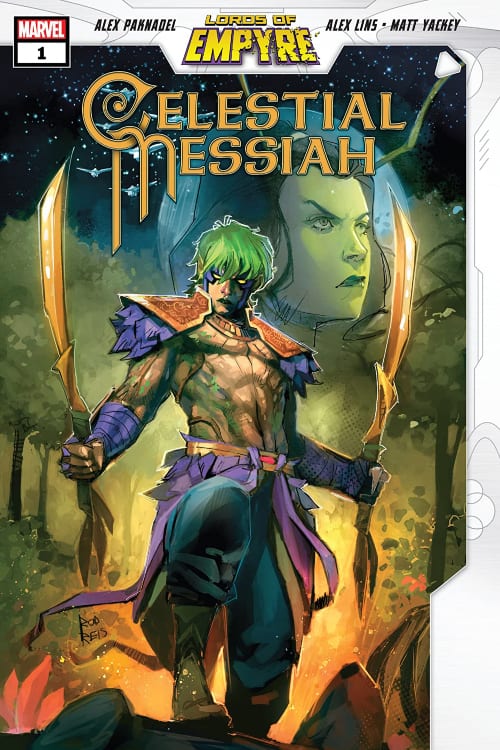 While July’s checklist had quite a few one-shots, August has just two for Marvel’s Empyre, plus one delayed release. To start, however, Lords of Empyre: Hulkling was shockingly good. In fact, it is one of the rare comics that, with over 150 ratings, has five stars on Comixology. However, did we start with something too good? And if so, will the remaining two one-shots strike fans the same way?  Finally, the most (or least) important question of all, will the delayed handbook actually help us?

Multiple races across the universe are pulled into a major conflict when EMPYRE hits! The Official Handbook of the Marvel Universe helps keep the participants straight with updates of the major players in this star-spanning war: The Avengers! The Fantastic Four! Captain Marvel (Danvers)! The Skrulls! The Kree! Hulkling! Plus: All-new profiles of Kree members Bel-Dann, Captain Glory (Gla-Ree) and Tanalth, Skrull member Raksor, and the Cotati Swordsman! Also featuring the mysterious, never-before profiled Blue Area of Earth’s Moon!

The eve of Quoi’s ascension is at hand! But when the trials are interrupted by an unexpected interloper—Mantis—who will win this battle of wills? Don’t miss out as mother and son go head-to-head, revealing secrets that will shape the course of the galaxy!

THE SWORDSMAN HAS BEEN RESURRECTED! But there are more secrets than what lies beyond the grave… Join Swordsman and his son, Quoi, as they embark on a journey of discovery here on Earth – one they can’t walk back from! 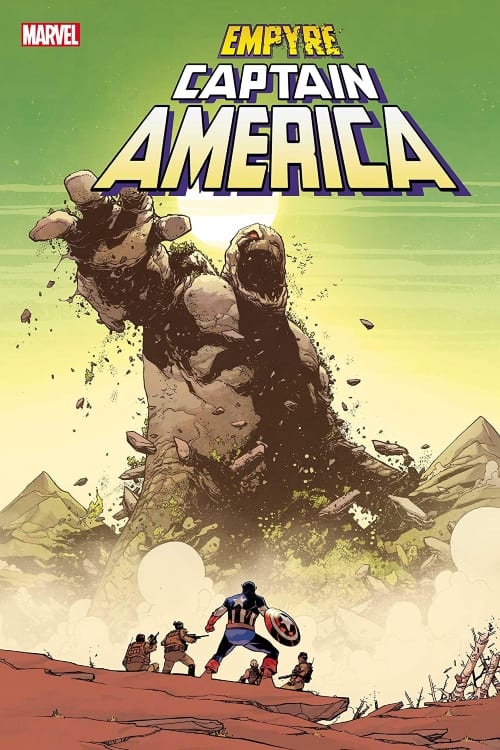 So, this one is going to look a bit strange. A lot of issues come out for various Empyre mini-series, but only three titles. It’s still weird to think that Marvel’s original checklist for Empire, from April, had about 20 issues coming out in August. Sadly, Thor, Spider-Man, The Union, Ghost Rider, and so many others are just gone. Sure, that’s good for our wallets, but it also means a few dozen artists, writers, colorists, letterers, and so on losing work. But here’s what we will get:

The X-Men return to Genosha as plant people from outer space invade the planet in a tale so crazy, it’s taking the entire writing crew of the X-Men line to tackle it!

ALIENS! PLANT-MEN! MUTANTS! ZOMBIES! OLD WOMEN! DEMONS! EXPLOSIONS! These issues have more than you ever dreamed to ask for. And then some.

The stunning conclusion as X-Men, zombies, plant-men and more reach an explosive finale!

Earth’s Mightiest Heroes fight an intergalactic foe on three fronts! In New York, a villain from the past has been super charged with alien energy. In Mexico, old hatreds turn allies into enemies. And in the Savage Land, the soul of the jungle has been stolen and Shanna the She-Devil’s life hangs in the balance. It’s mystery, magic and mayhem, in the Mighty Marvel Manner!

Earth’s Mightiest Heroes are caught in a conflict against nature itself as the soul of the Savage Land hangs in the balance. Guest-starring Ka-Zar, Shanna the She-Devil and the macabre Man-Thing!

Earth’s defenses are being overrun! With his back against the ropes, Captain America reaches out for aid…but is there anyone left to hear the call? 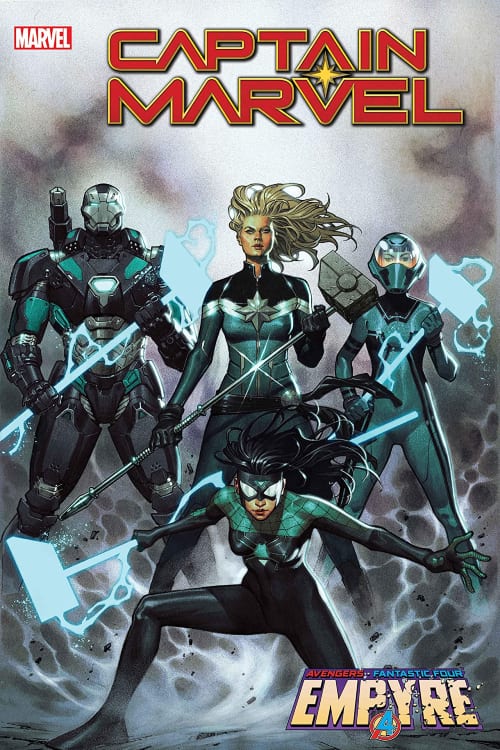 While there aren’t too many tie-ins this month, we still have three titles, sort of. Though the August issue of X-Men #11 doesn’t have the banner for Marvel’s Empyre, it’s on the checklist since Marvel originally solicited it that way. And when you see the description, you’ll understand why. Other than that, there’s one incredible development: the return of the New Fantastic Four!

THE RETURN OF THE NEW FANTASTIC FOUR?! The events of EMPYRE threaten all life on Earth and the future balance of power throughout the cosmos! And the secret mission that the FF have placed into Valeria and Franklin’s hands requires some big-league help!

THE ACCUSER GOES ROGUE! Captain Marvel has stepped into the role of accuser in the newly unified Kree/Skrull Empire. But when she’s tasked to accuse a renegade soldier responsible for heinous crimes, she finds herself torn between two worlds. Don’t miss the revelation of the year – one that will not only change Carol’s whole world, but the shape of the galaxy!

THE ACCUSER CORPS! Captain Marvel recruits some of her closest allies to unravel the mystery of the Universal Weapon — and the woman she’s meant to accuse. But is Carol splitting her power just when she’ll need it most? And how is the united Kree/Skrull Empire going to react to three more HUMAN Accusers?!

THE ACCUSER CORPS! Captain Marvel recruits some of her closest allies to unravel the mystery of the Universal Weapon — and the woman she’s meant to accuse. But is Carol splitting her power just when she’ll need it most? And how is the united Kree/Skrull Empire going to react to three more HUMAN Accusers?!

For the most part, that about wraps up the event. August is a big month for Marvel’s Empire, so hopefully, this checklist will help. If so, be sure to check back here for September’s checklist!

Which tie-in are you enjoying the most so far?

Thunderball Retro Review: Great Balls Of Something
Joe Rogan On Video Games And The UFC Series: “Waste Of Time”