Who Is MODOK, A Multi-Layered Experimental Villain

Who Is MODOK, A Multi-Layered Experimental Villain 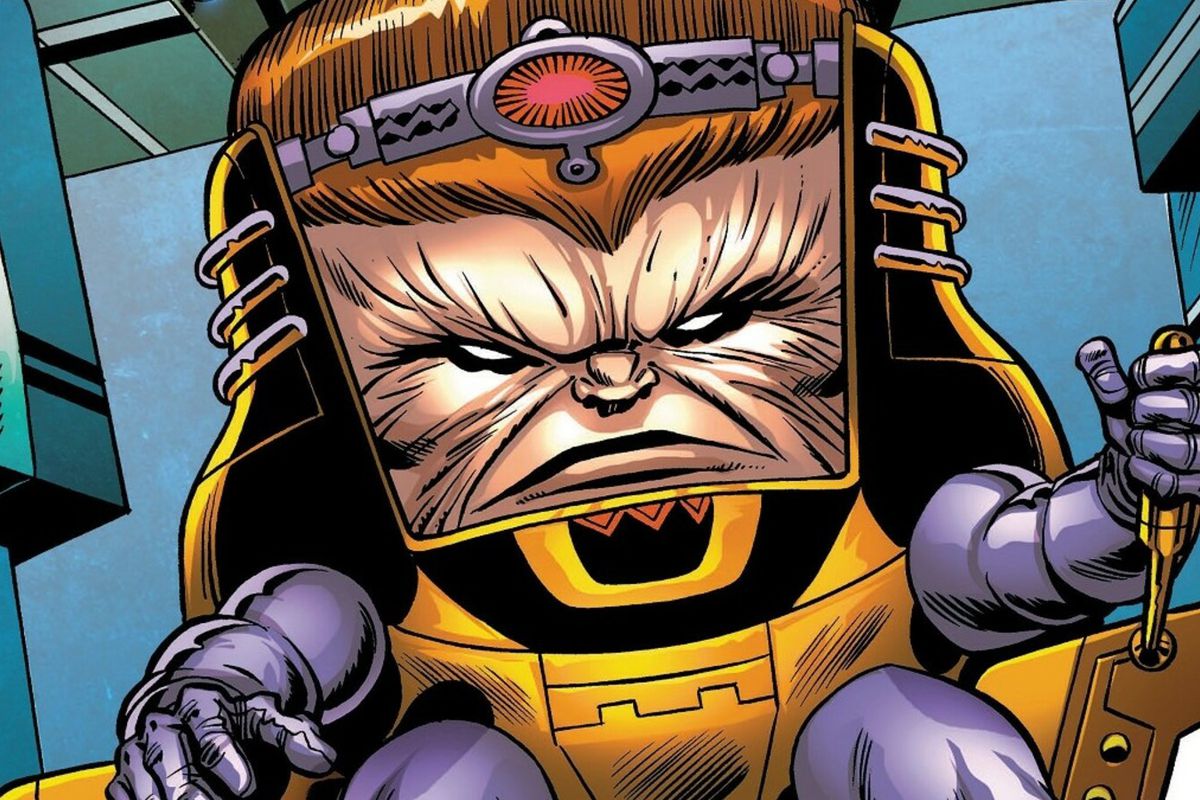 MODOK is another of Marvel Comics’ science fiction characters. He is also known by the acronym Mental/ Mobile/ Mechanized Organism Designed Only for Killing.

Initially, the first MODOK was an ordinary human being. His name was George Tarleton, a former employee of AIM, the Advanced Idea Mechanics organization. His mission was arms trafficking, specializing specifically in futuristic weapons.

Tarleton is subjected to medical experiments that seek to increase his intelligence through a substantial mutagenic process. This experiment was indeed successful but gave him a horrible physical appearance.

His appearance is completely abnormal, whereas his head is deformed and abnormally developed. He also has an atrophied body and needs to be in a floating chair to move around. After the experiments, he murders all his creators, thus taking over AIM. 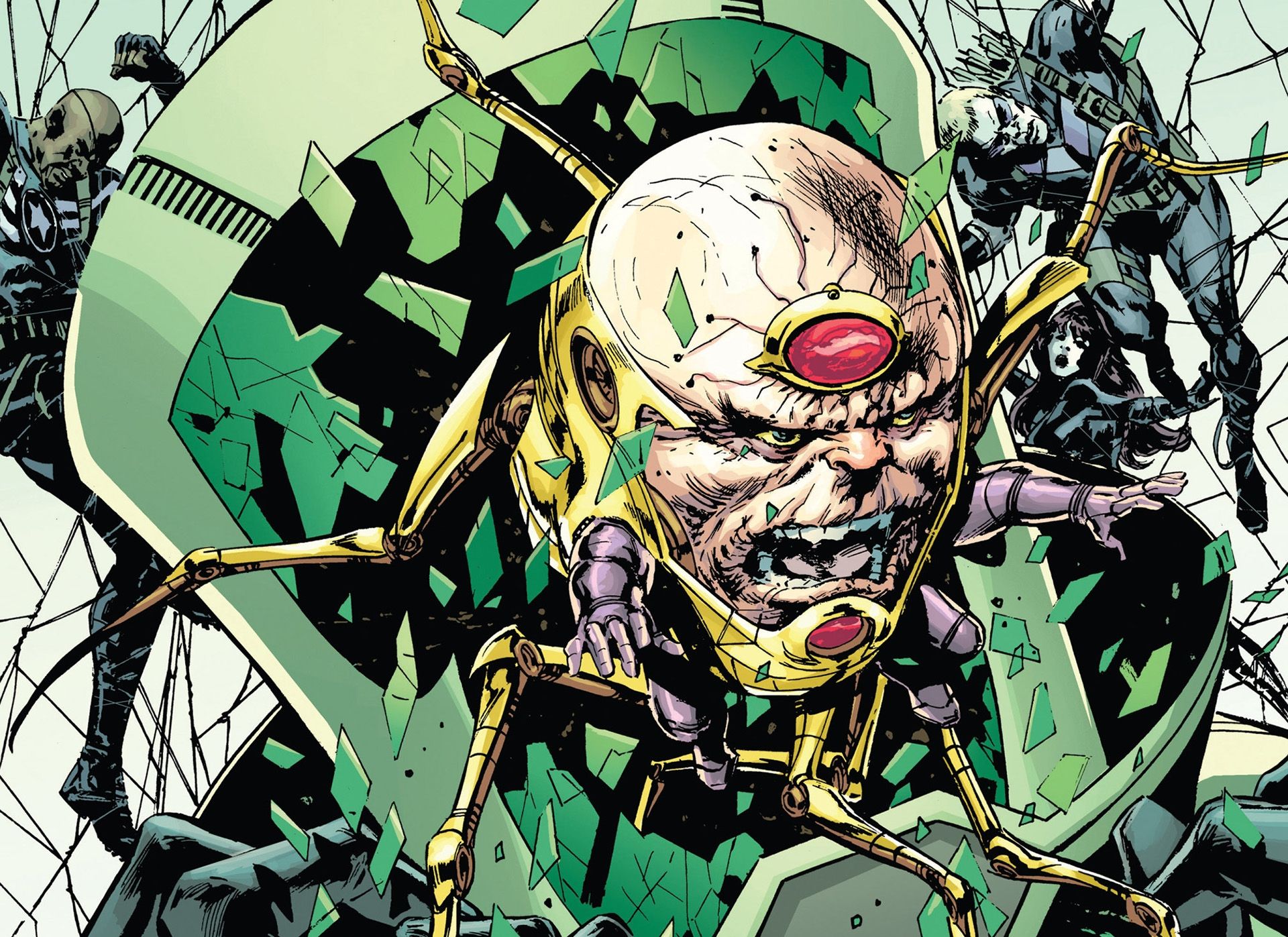 The first appearance of MODOK is in 1967 in Tales of Suspense #93 and 94, being a frequent enemy of Captain America. His creators were Jack Kirby and Stan Lee.

After the murder of MODOK in Captain America #313 in 1986, he has a dreadful return in the same year in Iron Man #205, appearing that resurrects in 195 in several stories, such as:

Likewise, in the years to come, several attempts were made to improve the version of the character, such as in: 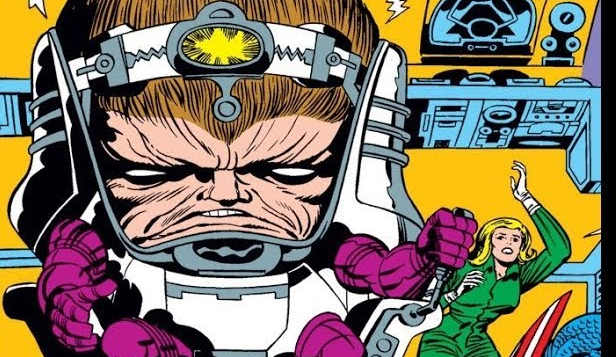 There is much to tell about MODOK’s biography in its evolution:

Before becoming MODOK, George Tarleton belonged to the organization founded by his father, Alvin. This company was called AIM, Advanced Idea Mechanics, a criminal organization, and Tarleton was a technician.

Tarleton was born in Maine Bangor. He is transformed into MODOK when he is subjected to an advanced mutagenic process by a Cosmic Cube, who became a man-mind with superintelligence. The formation of his initials has to do with a Mental, Organism, Designed Only for Computing.

But in a lust for power, the already converted MODOC becomes MODOK (Mental, Organism, Designed Only for Killing), so he murders his creators and takes over the leadership of the AIM company. From that moment on, he became a bitter enemy of Captain America, facing countless fights against him and several superheroes. 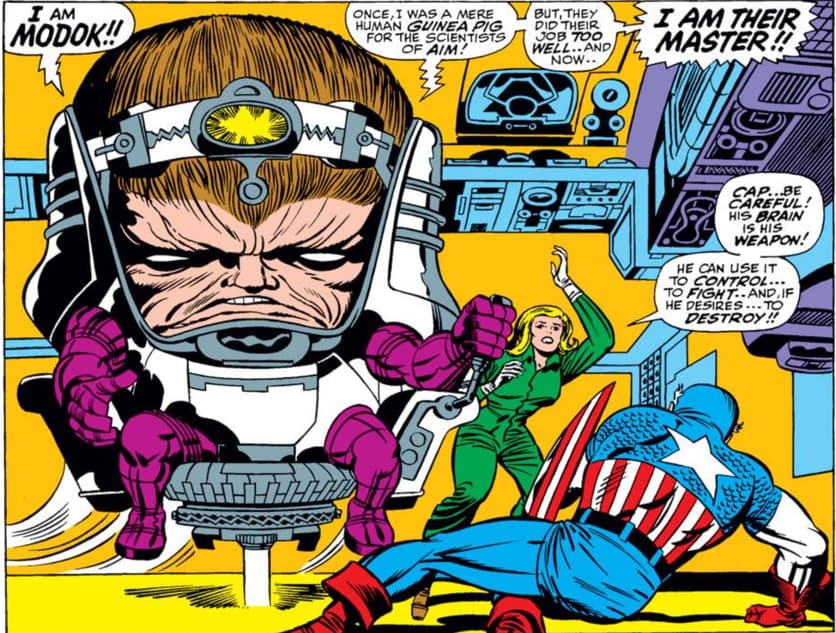 MODOK deceives everyone with plans to end the world, which is a simple distraction. For his operation, he used several brain clones that were part of a supercomputer. These were destroyed by Red Hulk, surviving only a brain cloned to be an organic computer, already loaded with the mind of MODOK.

Thus a new MODOK is formed with the appearance of the original MODOK, the intelligence of genius, and the mental powers of the first, with none of its weaknesses, and is called MODOK Superior.

In this new version, he fights again with various superheroes such as the Avengers, Thor, Red Hulk, and others. Between MODOK and Zero/One, a romance is born while they make a truce to fight against the Soldiers of the Serpent.

MODOK Superior had a brief retirement from the battlefields, returning to create a group of assassins he called Agents of MODOK. This organization was intended to be made up of mercenaries willing only to kill.

But, those assassinations were intended only for evil people. MODOK made the serious mistake of recruiting Gwen Poole, thinking she was superhuman. However, upon discovering that she was not, he tried to eliminate her, and she turned against him. She subsequently sent him into space, injured in one eye and with damaged equipment. After a brief period of Gwen’s leadership, the organization disbanded.

MODOK, as such, had no real family but hallucinations driven by his father, AIM founder Alvin Tarleton. The character saw himself with a human wife, children, and a robot daughter, all of which never existed except in his mind.

Due to the mutagenic process to which George Tarleton was subjected, he was given hyperintelligence among his abilities. For this, he sacrificed his body, having the largest brain in the world.

This characteristic gave him enhanced intuition. This way, he could solve patterns and improve his storage and retrieval of information, better structuring both logically and philosophically.

As a predominant ability, he has precognition, with which he can predict strategic and tactical scenarios. His memory is almost perfect, being able to remember every moment. But, on the other hand, his creativity is within the average limits of any human.

In addition, he has telepathy as a psychic ability, able to control large groups or individuals mentally and indifferently. He can also generate force fields to withstand minor nuclear explosions. Through the technology provided by AIM using a wreath, he can concentrate all his mental power on devastating energy rays.

While it is true that he has MODOK powers and abilities, this process generated him to sacrifice his body, which could not support the weight of his brain, being prostrated to a Doomsday chair to be able to move. This also led to accelerated wear and tear of his internal organs.

Other Versions of the MODOK 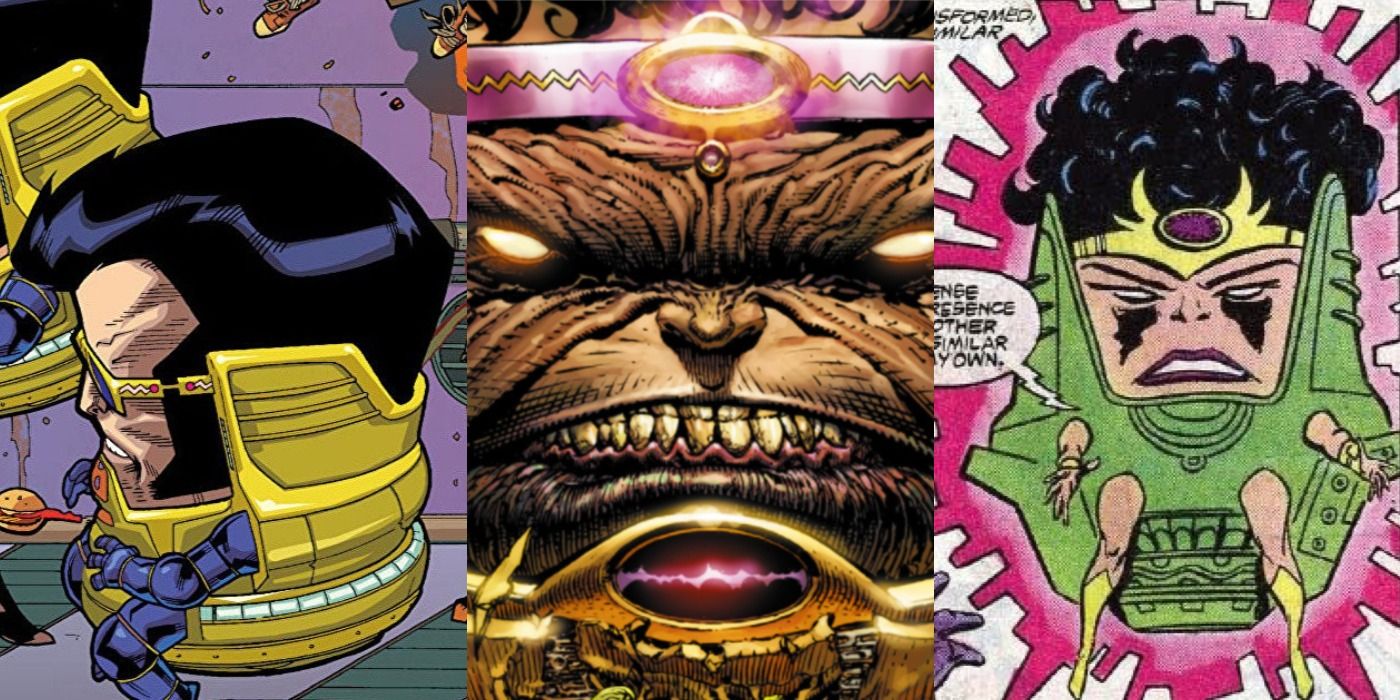 In other versions of the character, we can find:

In Marvel Adventures: The Avengers appears MODOC which stands for Mental Organism Designed Only for Conquest, being defeated by the Avengers.

MODOK and AIM had several iterations in the two series of Carol Danvers, better known as Ms. Marvel.

This version, unlike the original, can walk and does not require a floating chair. It goes by the name MODOT and stands for Mobile Organism Designed Only for Talking, who is a former Nobel Prize contender.

This other version has the genocide and Iron Man had an encounter with it in The Invincible Iron Man, second volume.

Another version of MODOK appears in Marvel Max’s US War Machine miniseries.

This version shows MODOK as a disembodied head in Ultimate Vision. And he appears as a cyborg in Ultimate Armor Wars #2.

Beyond Corporation made at least 4 versions of MODOK inspired by Elvis Presley.

MODOK appears in Iron Lantern #1 as part of the Amalgam Comics imprint, where he crosses paths with DC Comics’ HECTOR.

MODOK appears as an alternate version that devours Hawkeye and She-Hulk in zombified versions.

In this version MODOK is killed like the rest of the telepaths of the planet when Red Skull activates his powers, using his armchair.

MODOK is one of the villains who attacks Danielle’s group in Avengers of the Wastelands.

A version of MODORD (Mental Organism Designed Only for Roller Derby) is introduced in the miniseries X Men: Serve and Protect.

MODOK in this version is an assassin of all known superheroes, this occurred in Secret Wars, the Battleworld domain of Killville.

This character was once based on Donald Trump when he was a U.S. presidential candidate, and appears in Spider – Gwen, designed to be a king.

MODOK’s Appearances in Other Media

MODOK’s appearances have been varied, such as:

On the small screen MODOK has appeared in countless occasions, we will try just to mention some of the series: There are several incarnations that the Marvel Cinematic Universe (MCU) franchise has considered to bring out MODOK in a film, such as: 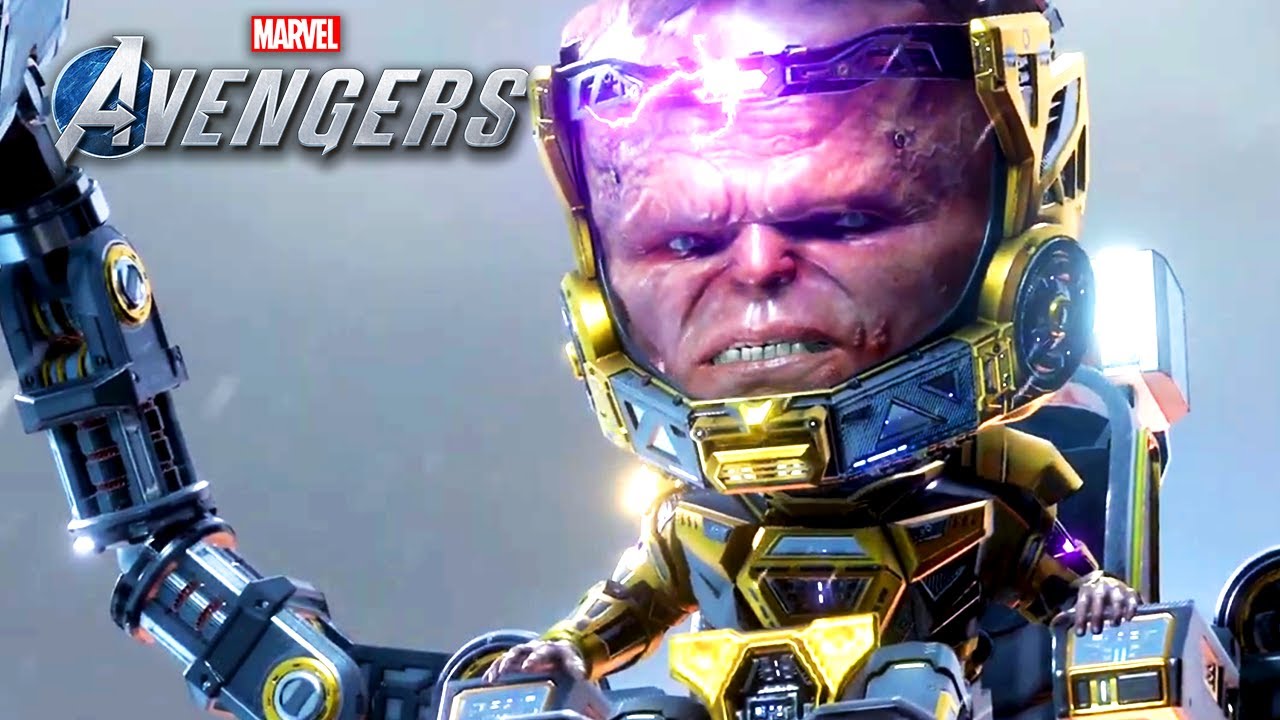 MODOK can be seen in several video games, so many that we will mention just a few:

Music has also played the supervillain MODOK in: 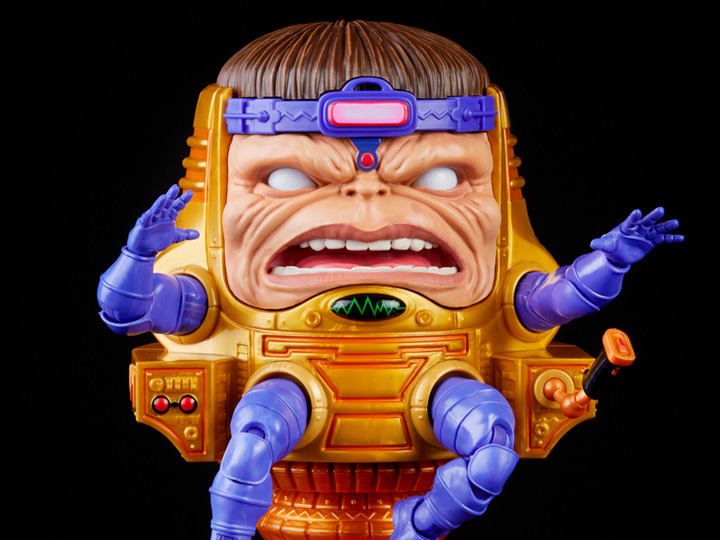 The toys of this MODOK character have been several, such as:

This evil character appears in the paperback novel Iron Man: And Call My Killer… MODOK! Written by William Rotsler.

MODOK appears in Bob the Angry Flower in the collectible editions from 1999. Also, in 2007, he appeared in a strip called Thinking Ape Blues. 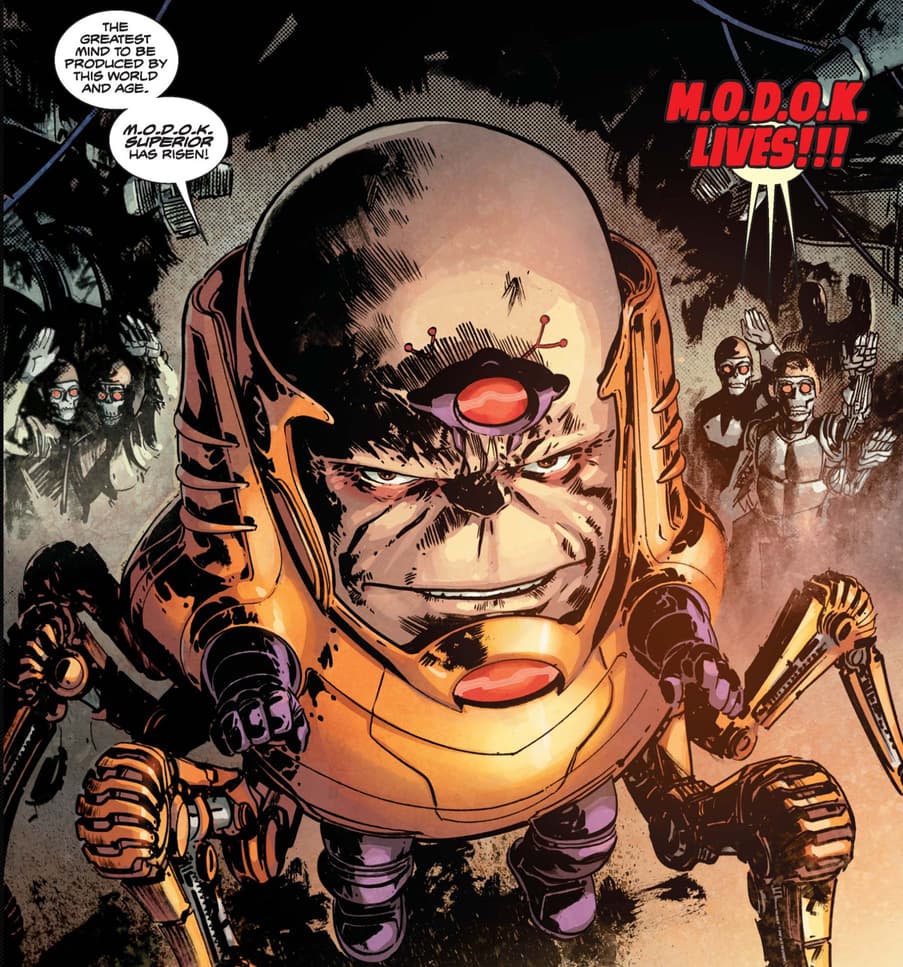 MODOK is one of the comic book villains ranked by IGN’s list as the 100 best of all time, occupying the 100th place. This villain will soon be seen in the movie Ant-Man 3, where he will debut on the big screen.

This character is one of the most difficult to portray in a film, all because of his strange and abnormal appearance. But in the latest trailer of the film that we have already seen, we can see a great representation, which is worth seeing.

The appearance that we believe this villain deserves after more than four decades of starring in series and miniseries in the Marvel universe. So, we hope a fantastic performance made by the actor Corey Stoll in the movie Ant-Man and the Wasp: Quantumania will be released in 2023.

Ezra Miller Actor Will Not Go to Jail! Court Approves Their Settlement
Glenn Howerton Could Be The Next Mister Fantastic In The MCU