Who Is Guardian - History Of Canadian Super Team Alpha Flight

Home » COMICS » Marvel » Who Is Guardian – A Look At The Characters On The Canadian Super Team Series, Alpha Flight

Who Is Guardian – A Look At The Characters On The Canadian Super Team Series, Alpha Flight

Canada is having a moment in today’s current pop culture scene. Canadian actor Elliot Page said his character on The Umbrella Academy will also be trans, Ryan Reynolds is everyone’s favorite potty-mouthed action hero, Deadpool, and Domee Shi’s critically acclaimed Turning Red is a homage to Toronto and Canadian life. There’s another one we can add to the list: Alpha Flight, the Canadian version of the Avengers! Who?? Alpha Flight appeared in April of 1979 and was first introduced in Marvel’s The Uncanny X-Men #120. They were originally created to serve as part of the X-Men plotlines and were woven into Wolverine’s backstory. Marvel later published an Alpha Flight comic book series from 1983 to 1994. The characters that make up this Canadian super team are not so well known, but that should change. So, let’s tell you who Guardian is and his history with Alpha Flight, eh?

First Off, Who Are the Canadian Super Team, Alpha Flight? 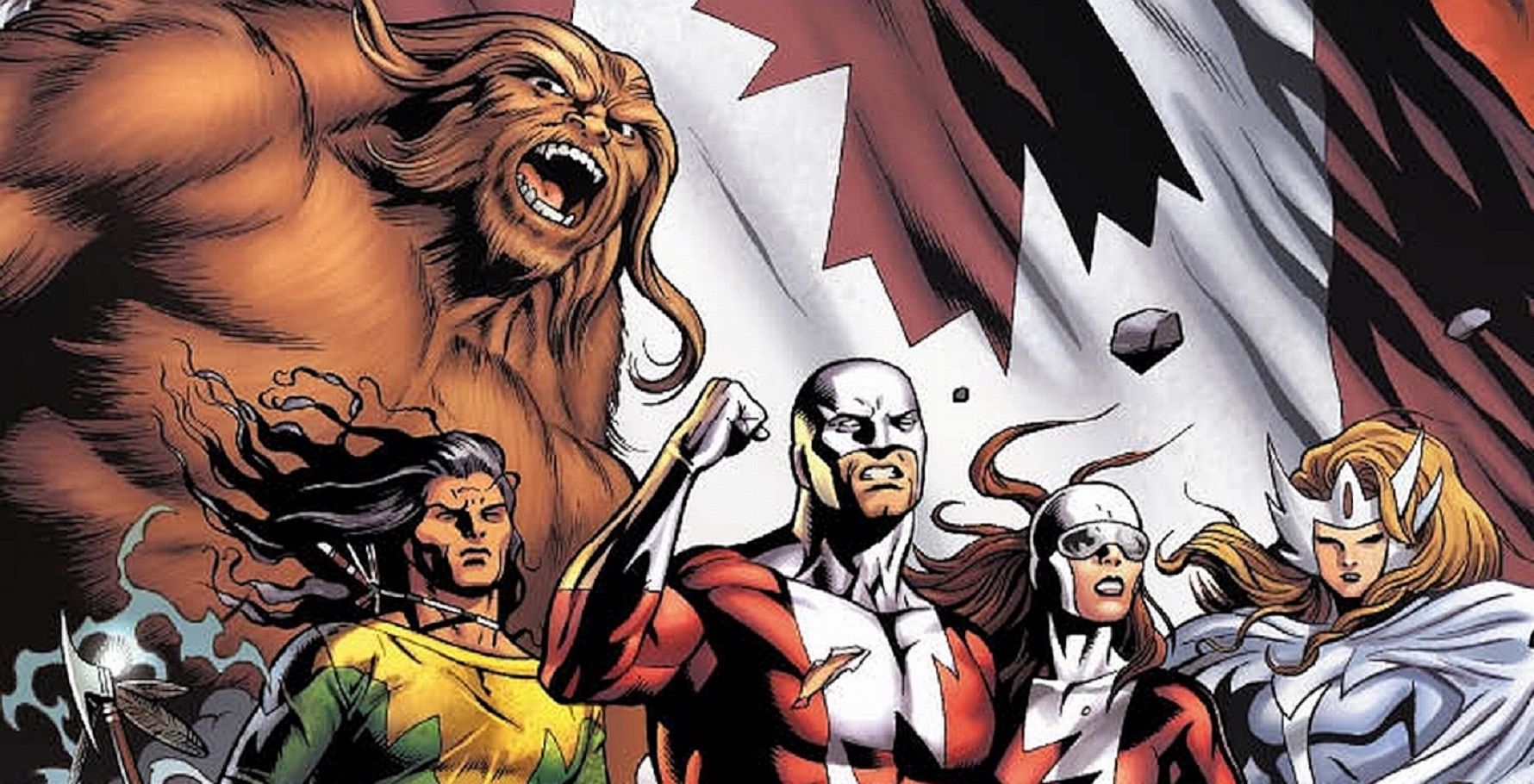 Alpha Flight was created by Canadian writer and artist John Byrne and as mentioned before, first appeared in The Uncanny X-Men #120. The issue had a second part (aptly called The Uncanny X-Men #121), where the superteam made another appearance. Funnily enough, Byrne actually never intended for Alpha Flight to go further than those two issues, saying that he created them only to “merely to survive a fight with the X-Men” for the purposes of that story. However, Bryne’s popularity was growing, and Marvel wanted to capitalize on this, so they convinced him to feature them in their own Alpha Flight series. Byrne wrote and penciled the first 28 issues and then left, saying that he didn’t find their stories or backgrounds compelling enough to continue. Despite not having Byrne on board anymore, the series continued, lasting a total of 130 issues along with annuals and miniseries. There were also three short-lived revivals, the most recent one being an eight-issue limited series from 2011 to 2012, after the resurrection of the team in the comic Chaos War: Alpha Flight.

Diversity and representation matter and for Alpha Flight, most team members have distinctly Canadian attributes, which is awesome! There are characters who have Inuit/First Nations heritage and others that have French heritage, both major communities within the territories of Canada. The team works for Department H, a fictional branch of Canada’s Department of National Defence that deals with super-powered villains. Their first mission was to follow up on Guardian’s task of retrieving Wolverine from the X-Men.

Who Is Guardian and What Are His Powers? 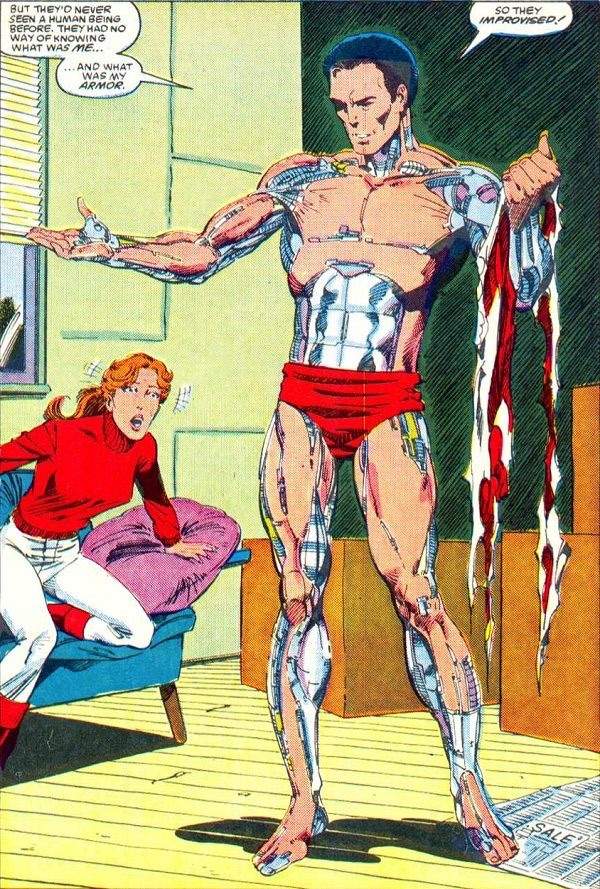 Guardian (alias: James MacDonald Hudson) is a scientist from London, Ontario. He earned a Ph.D. in engineering. Throughout his history, he’s gone by many names like Weapon Alpha, then Vindicator, and then Guardian. He wears a suit of battle armor, which allows him to fly thanks to beams of light that are directed at the ground, propelling the wearer forward at up to Mach 1. The original suit was created by Hudson for drilling and tunneling, but his design evolved to become cybernetically controlled and incorporated a high-resolution navigation system. Guardian could use the battle suit to trigger and release gravitons, which cancel the Earth’s rotation and propel him westward at up to about 1000 miles per hour. This effect would suspend his positioning relative to the Earth’s electromagnetic field while the planet rotated, allowing him to travel at high speeds.

Later, the alien Q`wrrlln converted Hudson into a cyborg by incorporating much of his battle suit into his actual body, greatly enhancing his powers, such as strength and durability. Hudson’s cyborg brain was half his original brain and half mechanical. He could control his mechanical systems by mental command, though he was vulnerable to being controlled by the Q`wrrlln through the mechanical portion of his brain. Guardian is the team’s first leader (a Captain America-esque role) and wears a stylized Canadian maple leaf flag on his costume. Byrne said that Guardian was a “fan character” meaning that he was created before Byrne worked in comics professionally.

A History of Guardian Guardian was created by Chris Claremont and John Byrne. His history is intimately tied with Wolverine, hence the connection to the X-Men. Before becoming Guardian, Hudson was a leading engineer and scientist working on a powered exoskeleton suit for the Am-Can Corporation. When he learns that his works will be used for American military purposes, he steals his suit back; however, instead of being arrested, Hudson’s girlfriend convinces Am-Can Corporation not to charge him with crimes, and instead Department H is formed. Feeling inspired by the Fantastic Four, Hudson decides to form a superhero team within Department H. His first team is called the Flight and features none other than Wolverine himself as a member. Later, he forms Alpha Flight, whose first mission is to take Wolverine back from the X-Men.

Guardian has made an appearance on the X-Men animated television series in the episode “Repo Man,” where he was known under the code name Vindicator. He’s also appeared as a playable character in a few video games such as Marvel Superhero Squad Online and Marvel Contest of Champions and had an action figure released by Hasbro in 2008.

Do you feel like you have a better sense of who is Guardian? Is there anything else in the history of Guardian I missed out on? Let me know in the comments below!