Who is Gorr the God Butcher? The Villain of Thor: Love and Thunder

Who is Gorr the God Butcher? Meet the Villain of Thor: Love and Thunder We already know the identity of the new villain of Thor 4: Gorr the Butcher God. Many of us had already heard of Loki and the Frost Giants, but you probably knew very little about this character. His story is quite sad and full of tragedy, leading him to become a murderer of gods.

Gorr is a Thor comic book villain who despises all the gods, killing many. He has put different versions of the God of Thunder in danger using his many abilities. Let’s now see who is Gorr the God butcher, which we will see soon in the movies.

Origins and History of Gorr the God Butcher

Gorr the God Butcher was an inhabitant of a scarce, desertic, and insecure planet for him and the rest of the inhabitants. This character is distinguished by being quite religious, praying to the gods to get him out of this world and end the hunger, thirst, earthquakes, and diseases that afflicted him.

Despite his prayers, no god came to help him. However, he thought his luck would change when he could get a partner and have three children. Thinking that his fate was changing, he continued to pray, not knowing that misfortune was near. In an earthquake, his wife died, and he had to watch his children die one by one.

After the death of his wife, Gorr began to hold a grudge against the gods, and when his children died, he denied their existence. His transformation into a villain started when he discovered that the gods knew about their misery and still weren’t helping them. Seeing this, Gorr’s resentment for the gods flared up because they did nothing to protect his wife and children. Gorr witnessed combat between Knull, King of Symbiote, and a golden god. Gorr killed them both and started a crusade against all the gods that exist in the world. At that moment, he gained the power of All-Black, The Necrosword, which isn’t a standard weapon but a living being who can shapeshift.

He escaped from his world, meeting, confronting, and killing several gods, gaining strength. Gorr eliminated gods of war, torture, philosophy, and love. His hunt was relentless, killing god after god until his first encounter with Thor in the IX century.

The first encounter and confrontation between the two was on Earth when Gorr killed several gods of this planet. Thor, who was helping some Viking friends reach what is now Russia, found the remains of the gods eliminated by Gorr.

They met, initiating a hard-fought battle. Gorr took advantage and almost eliminated Thor. However, Thor sent him a lightning bolt before Gorr could destroy him. The latter took refuge in a cavern to recover, followed by Thor. They continued with the confrontation, where Gorr captured and tortured Thor to give him Asgard’s location. Thor managed to escape, thanks to the collaboration of his Viking friends, to confront Gorr again and scored a blow that would cut off Gorr’s arm. 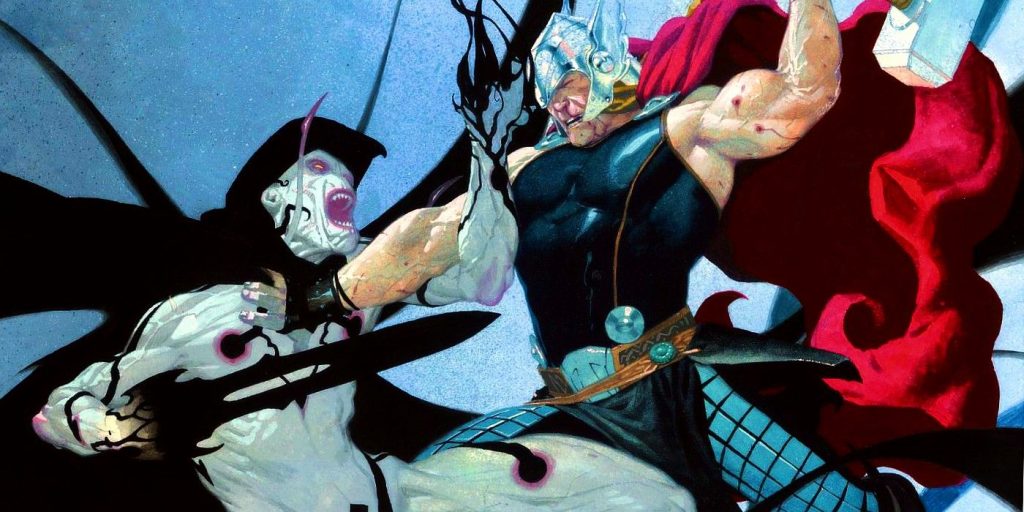 Thor thought that Gorr had died after that attack and left him in place, not knowing that he was still alive and would cause a disaster later. Gorr, on his part, got up some time after Thor left and started the hunt for gods again, absorbing as much power as possible.

Gorr’s return to the past

After his encounter with Thor, this god-killer survived and continued killing gods, absorbing their strength. He organized a dark army to attack the gods, leaving a trail of death for over a thousand years. Thor would realize that Gorr survived and set out to find him to end his crusade.

Thor realized that this enemy was still alive because he received a call from a desolate planet. The prayer was from a person asking for help, and upon arrival, Thor noticed many corpses of gods. He immediately realized that the deaths of the gods were very similar to the bodies that Gorr had left on earth. That triggered Thor to search for this murderer to stop him immediately.

Thor went in search of Gorr. However, the latter annihilated Chronux and used the blood of Chronux and the other gods of time to access the timestream. Thus Gorr returned to the past, killing gods. He even went to the beginning of all time, killed one of the first gods, and kept his heart as a trophy.

Gorr goes to the future

After that event, Gorr traveled to the future and used a desolate planet as his operation base. He also created versions of his wife and daughter, using Symbiotic from his armor. Additionally, he began to set his master plan in motion to bring about the destruction of the gods.

The plan consisted of creating a bomb that would eradicate all the gods of all worlds and all the time streams. This weapon, which he called “The Godbomb,” was built with minerals from the cores of planets and stars extracted from captured gods. He did not capture the Thor of that time, the King of Asgard, although he constantly tormented him. He did travel back in time and seized the young version of Thor, who fought with him to work on the extraction of materials for the bomb.

This version of the god of thunder stood by, waiting for his chance to act. He took advantage of the oversight of his captors and tried to destroy the bomb. However, Gorr’s men discovered and expelled him from the planet. While wandering in space, he encountered two temporary versions of himself. These were: Thor King and Thor Avenger, who joined him to confront Gorr and prevent him from detonating his weapon.

The death of Gorr the God Butcher

That seemed the end of everything, but one of Gorr’s children, who had certain misgivings and hatred, betrayed him. His children helped Thor Avenger bring down his father, while the younger Thor, using the prayers of all, was able to absorb Gorr’s sword and black armor and the divine bomb. 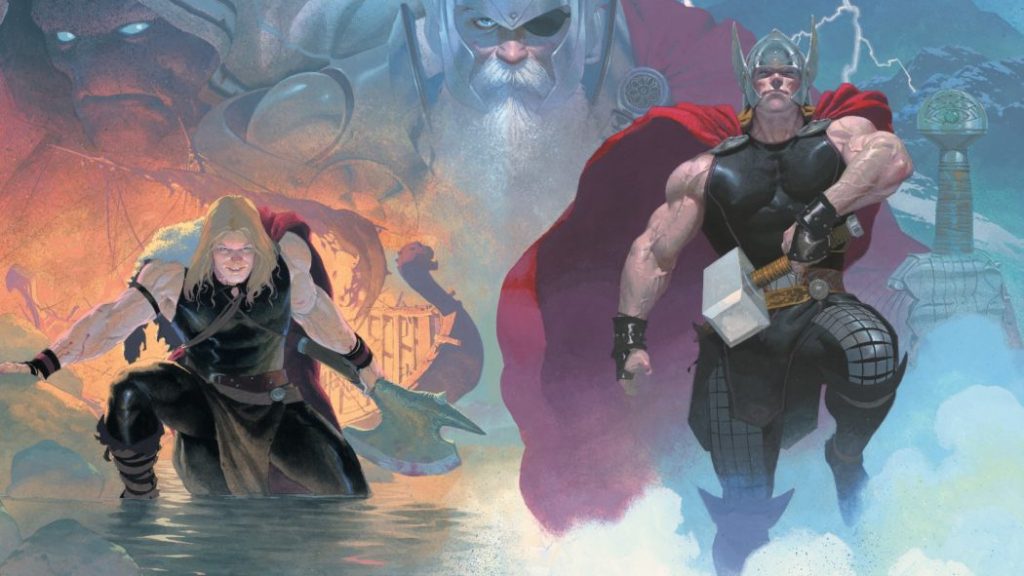 Gorr’s son referred to him as the god of hypocrisy since he had done the same as the gods did moments before the younger Thor gave him the coup de grace and ended this character.

Abilities and Powers of Gorr

Gorr’s abilities and powers are varied, although most of them are elements that he has taken from the gods he has faced. As we said before, he possesses the black god’s weapons powers, called All-Black The Necrosword. That gives him incredible strength, in addition to having a weapon that is capable of killing the gods. 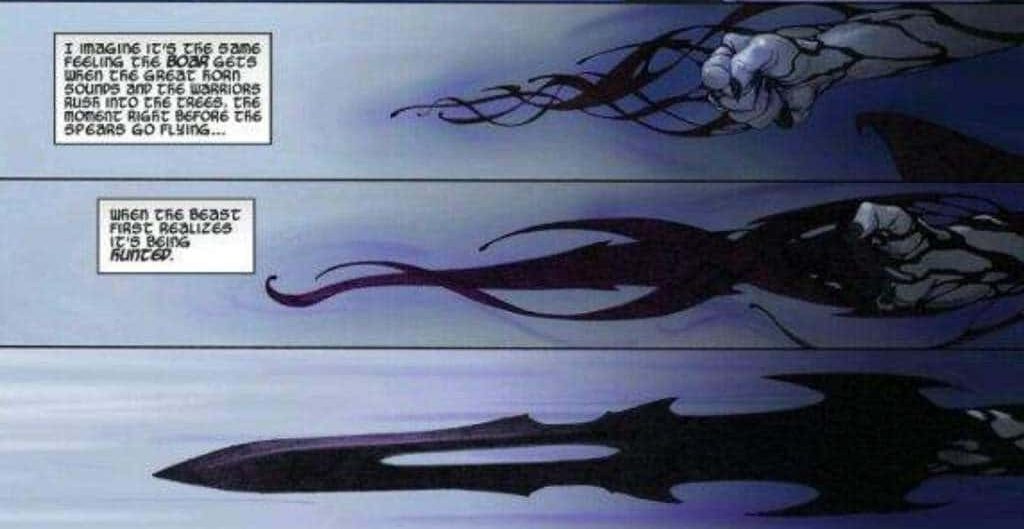 After fighting with many gods, including the god of war, his ability with weapons increased. Gorr, the god butcher, can handle regular and divine weapons. He can also perform torture; in fact, he tortures a version of Thor for 15 days to find the location of Asgard. Ironically, he also tortured several gods of torture, to kill them later.

One beneficial skill is the power to travel through time, using the blood of the gods of time themselves. He can attack different gods in different eras, allowing him to face Thor’s three versions.

Gorr’s appearance is a gray and somber being, with black armor sword called the “All-Black the Necrosword,” a weapon in the style of Venom’s Symbiote, but with the particularity that this one allows to hurt and kill celestial beings.

This villain of Thor has appeared in various comics of Thor, Venom, Avengers, and King in Black. This villain will also soon appear in Thor: Love and Thunder, although it is uncertain whether it will stick to its history.

Gorr has appeared in the comic Thor: God of Thunder Vol 1. The comics show the battle between Thor and this villain until the end. Gorr also appears in Thor Vol 6 and is mentioned in Venom Vol 4, Avengers: Forever Vol 2, and King in Black Vol 1.

Gor the God butcher has not appeared in movies yet. Nevertheless, we know that he’ll be the main villain in Thor: Love and Thunder. Christian Bale will play this character, the actor who played Batman in the trilogy Batman Begins, Batman The Dark Knight, and Batman The Dark Knight Rises. Bale has plenty of experience in dark, sad, and determined characters, so we expect his portrayal of Gorr to be as good as with the Gotham vigilante. We will have to wait and see the new Thor movie to enjoy Bale’s portrayal of this mighty villain this character.

Thor’s new villain in the movies has few appearances in the Marvel world, but they have been quite shocking. This murderer of gods who appeared in the comic book for the first time in 2013 will again put Thor in checkmate. We don’t know if he will be wearing the god-killing symbiote or using the gods’ bomb, but we certainly can’t wait to see more of him.

Who is Gorr the God butcher to you? Is he a foe or a friend? Tell us in the comments.