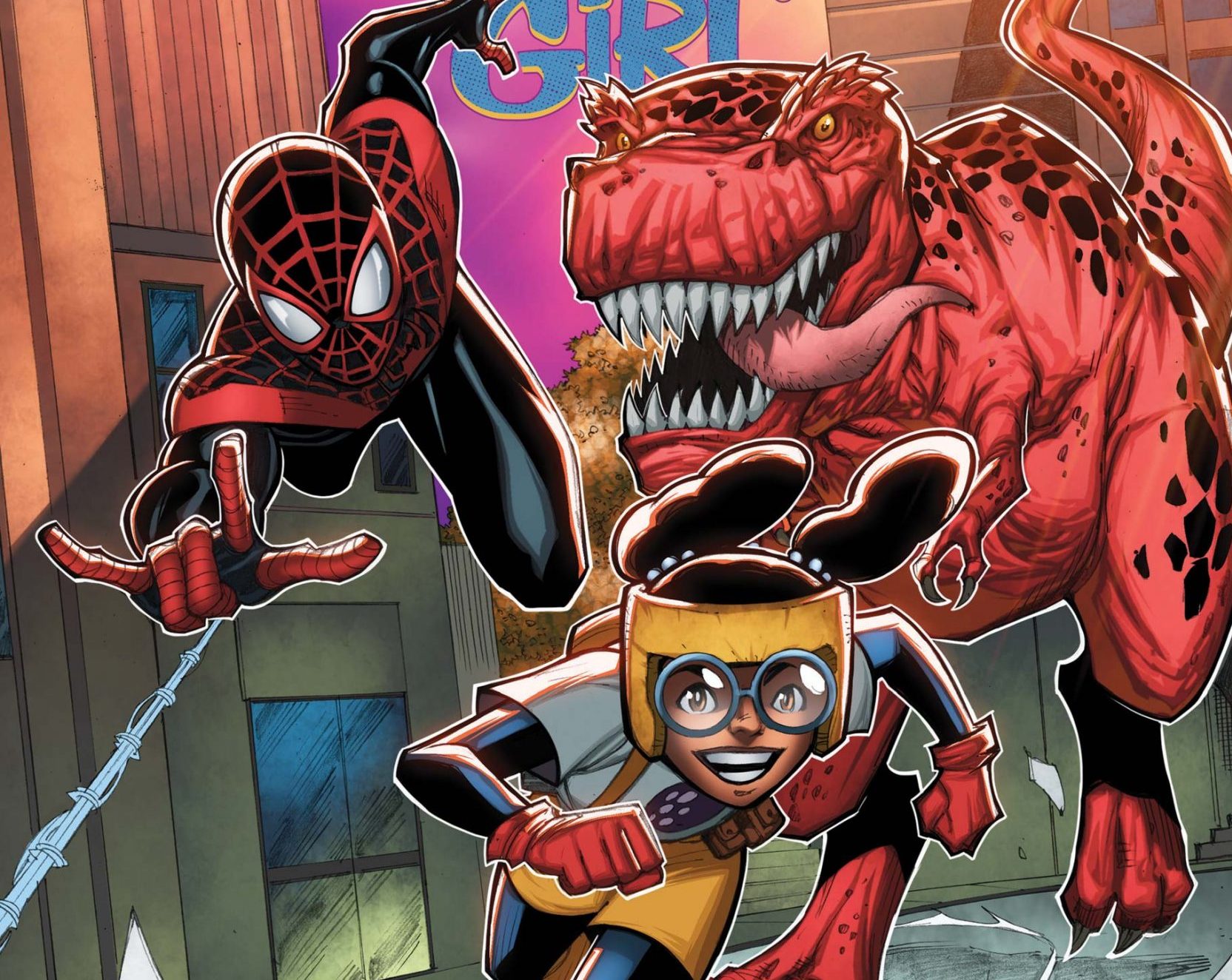 Miles Morales: Spider-Man & Moon Girl #1 is out, and our young genius is in trouble.

Lunella Lafayette, aka Moon Girl’s best friend, is missing. But this is not just a simple missing person issue because her best friend is a dinosaur named Devil Dinosaur. Now, to find her missing best friend, Moon Girl teams up with Miles Morales, aka Spider-Man.

The story of Miles Morales: Spider-Man & Moon Girl #1 starts with Moon Girl and Devil Dinosaur attempting to catch a thief. While it looked like a petty crime, it turned a sharp turn when Devil Dinosaur suddenly disappeared out of the blue. The unprecedented incident allowed the “weird” theft to escape leaving Lunella baffled. After all, a T-Rex disappearing in Manhattan is not something you’ll see every day. 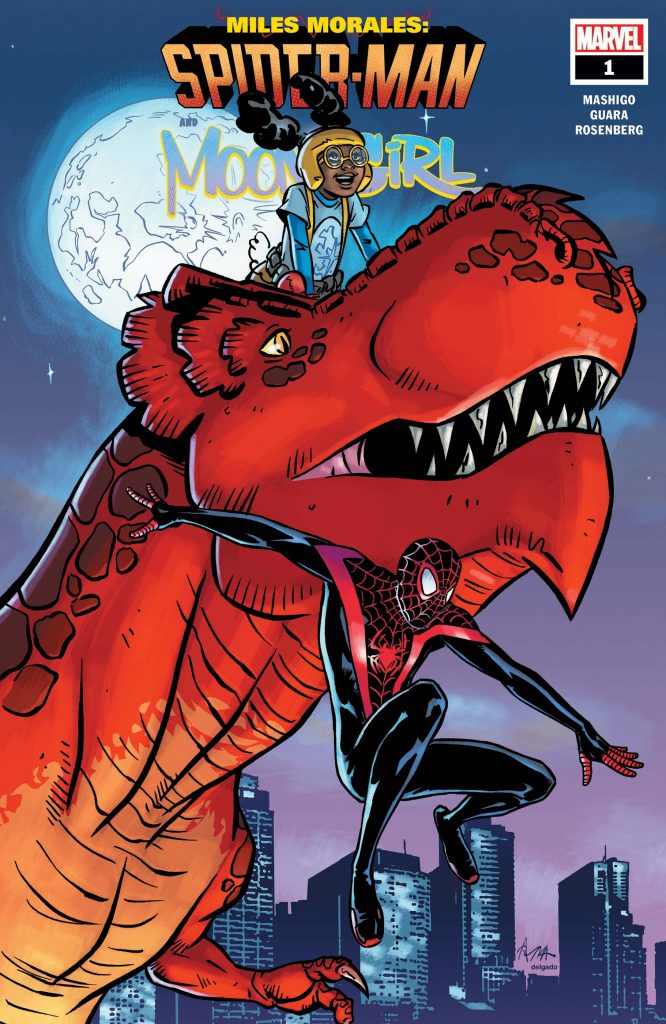 As the story goes on, Lunella sees news that there have been sightings of a dinosaur in Brooklyn. Being the nine-year-old genius that she is, she managed to make a fake exchange program at Brooklyn Visions Academy. Now, with her around the area, she can proceed with her investigation.

Lunella began her investigation with the help of her advanced technological prowess. But instead of discovering where Devil Dinosaur is, she stumbled upon Spider-Man. The pair would, later on, chase a bad guy in a motorcycle until a giant dinosaur appeared before them. But the dinosaur exploded even before they were able to investigate it.

The investigations of Spider-Man and Moon Girl to find her missing dinosaur led them to a secret lair. There the duo discovered the twisted truth about the sudden appearances and disappearances of dinosaurs in the area.

The issue ends with Lunella finding out the real identity of Spider-Man. She leaves Brooklyn Visions Academy with the firm resolve that she’ll continue to look for the missing Devil Dinosaur. 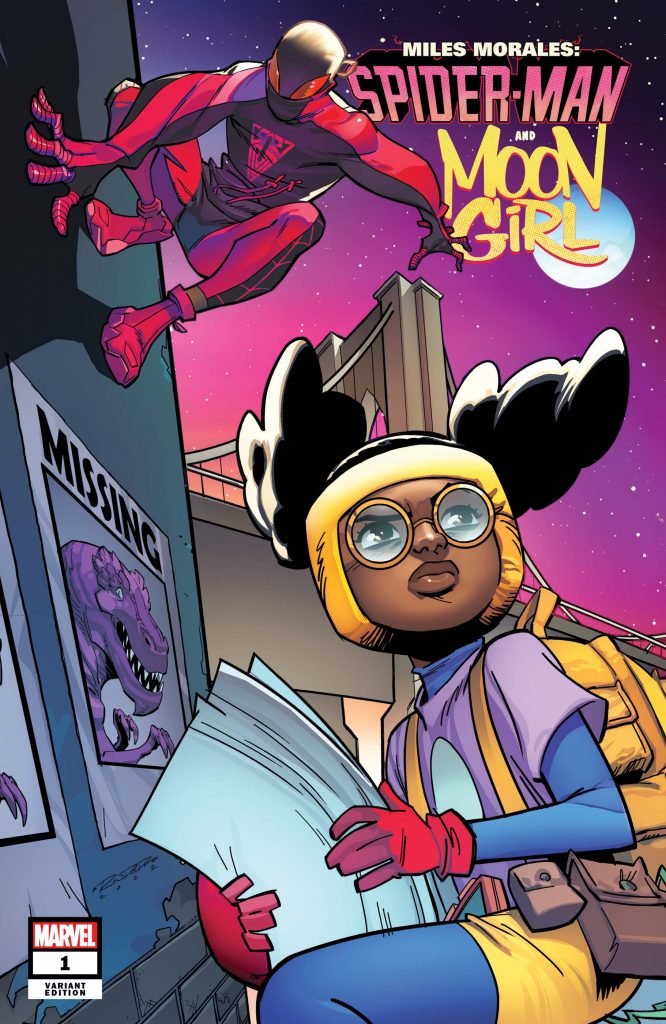 Who is Marvel’s Moon Girl?

Lunella Lafayette is a genius young girl living on the Lower East Side of Manhattan. She got her alias as Moon Girl because her genius-level intellect causes her to daydream.

Beside her is her trusted companion, Devil Dinosaur. The two began their relationship when Lunella built a device that would allow her to tap into Kree technology. With Kree technology in her hands, she found an Ombi-Wave Projector hidden under the Brooklyn Bridge.

However, the plans went south when one f her teachers accidentally activated Lunella’s device. The device opened a portal from Earth-616 to Dinosaur World and Killer-Folk to enter New York. In an attempt to avenge his first companion, Moon-Boy, Devil Dinosaur entered the portal.

This adventure later made her realize that she is a human/Inhuman hybrid. Through Terrigenesis, she would unlock her Inhuman powers and be able to share consciousness with Devil Dinosaur. With this, she can transfer and swap consciousness with DD. She can also increase the beast’s intelligence, allowing it to speak.

Dubbed as “Marvel’s smartest superhero,” Moon Girl’s intellect is superior to anyone. Amadeus Cho, the current Hulk in Marvel comics, declared her the “smartest person in the whole world” after acing a competence test. The test was intentionally made to be demanding that not even its previous owner and maker, Bruce Banner was able to solve it.

Aside from her connection with a Mutant Devil Beast and outstanding intellect, Moon Girl is a proficient inventor. She designed multiple paraphernalia that will help her combat and prevent possible complications. One of these is the Dyno-byte Prototype. While swapping consciousness, the prototype will activate if ever Lunella goes out of control.

The next adventures of Lunella Lafayette

As her interaction with Spider-Man is only the first, it’ll be exciting to see who in the Marvel Universe she’ll meet next. It would be fun to see her interact with the Avengers and X-Men in the future issues of Moon Girl.

Ezra Miller’s Career Is Over! – The Timeline of Their Downfall Explained
Thor: Love and Thunder Has “Ridiculous” Norse Mythology