Grant Morrison’s Final Crisis is very metafictional, using the “to be continued” mantra as an actual device in the story. Even in Dark Knights: Metal, though the Batman Who Laughs is distracting, Batman and Superman go to Dream’s house, where all stories live, even the untold ones. So far, Marvel never went that meta with their stories. The most they have is Deadpool gleefully breaking the fourth wall. But with Loki #3, Daniel Kibblesmith goes full-on Morrison, and it’s fantastic.

Where is the Shelf for D-Man in the House of Ideas?

Loki meets two very peculiar characters: the children of Eternity, appropriately named Then and Now. Then and Now oversee the “House of Ideas”—an actual place in the pantheon between the pantheons of the Marvel Universe, where all the “marvelous” stories are kept. Yes—the House of Ideas is now an actual place in the MCU where all the superheroes’ stories are housed. But it’s what Loki notices that makes this place, and these children, even more interesting. 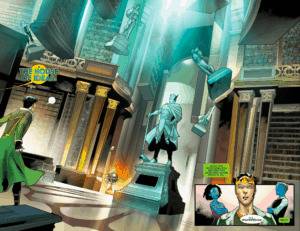 I want to go to there. (Marvel Comics)

Loki stumbles upon Spider-Man’s shelf and notes that there is no way so many stories could be told in one lifetime. Even more bewildering is Wolverine’s shelf, which stretches beyond sight. How is it possible for them to experience so much? Loki #3 finally answers that question. Then and Now alter time so that the heroes can do more heroic acts. Some of them asked for that, while others they felt needed it. But these two kids are bending time just so there can be more stories to tell, and then they put the stories on a bookshelf. 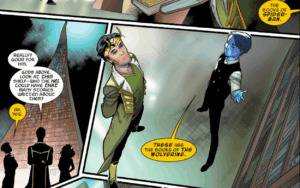 We, the Audience, Are the Children of Eternity

Daniel Kibblesmith makes the audience both spectator and culprit in Loki #3. We collect the stories while demanding more; Sure, we want to see Spider-Man continue his selfless acts of sacrifice, but we also want to see Wolverine go through more punishment. As a collective readership, we are ageless, but individually, we are children. And though we are wise,  we are also petty. Worst of all is that we simultaneously want the past to remain while demanding our heroes “be NOW! 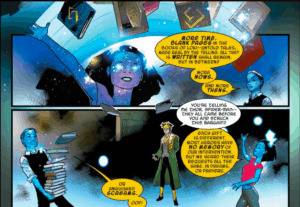 We want your anguish! (Marvel Comics)

This is the kind of concept Marvel needed to explore, and Kibblesmith does it wonderfully. Sure, it’s similar to what we’ve seen in DC, but the layer he adds with the children of Eternity makes it unique. It’ll be great to see how he continues to play with the idea that the “sliding timeline” isn’t just a mechanism for storytelling in comics, but an actual plot point.

If you were unsure about the Loki series, issue #3 just proved that it’s a must-read.

Grade: A+ to Kibblesmith for making time make sense in the Marvel Universe!