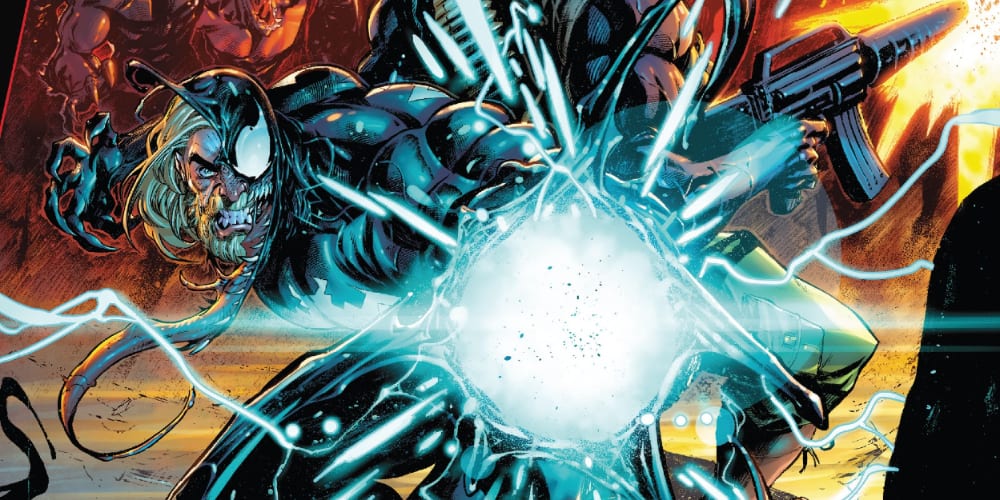 Well, we’re in Week Six of King in Black, which is actually less than halfway through. However, things are ramping up. However, for the first time, we have a substantial number of tie-ins. And for a week consisting of only tie-ins, it’s terrific. All in all, the titles here added to the event, and none of them felt wasted. So, let’s take a look.

Venom #32 is the Centerpiece of King in Black Week Six 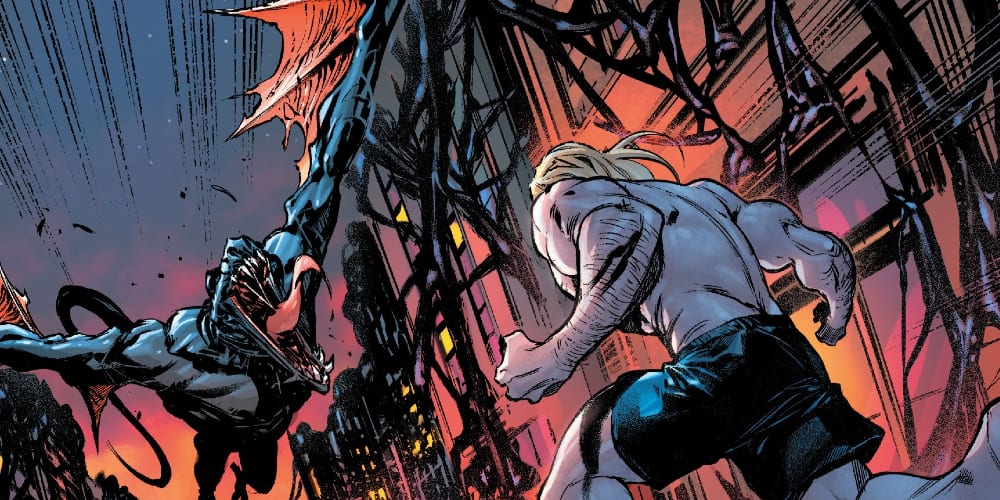 When you find yourself fighting dragons in your boxers, you’re going to want them to be Fruit of the Loom’s Breathable Underwear with Tri-Cool Technology. (Image: Venom #32, Marvel Comics)

Eddie Brock dies at the end of King in Black #2 when an attempt to bond him to a new symbiote goes wrong. But Eddie isn’t going to let a little thing like death get in the way of defeating Knull. In fact, Knull might regret killing Eddie, as now he can fight from inside the Symbiote hive mind. And he’s not alone. General Rex, the veteran who the US Military once bonded to a piece of the dragon symbiote, leads him through the hive mind landscape. Likewise, one of the greatest Venom hosts returns too—Flash Thomas, AKA Agent Venom.

However, this issue isn’t just about fighting Knull; it’s also about Eddie grappling with his mortality. This hits hardest when Eddie sees his son Dylan crying over his body as Spider-Man and other superheroes watch on. Cates is using a trick several writers have used for big events. While there is plenty of emotion in the main title, he uses the Venom tie-ins to give us more focused moments. He did this brilliantly in Week Two and likewise in Week Six. But man, he’s putting Eddie through the wringer.

The Fiercest Women Warriors Ever Kick Ass in King in Black: Return of the Valkyries #1 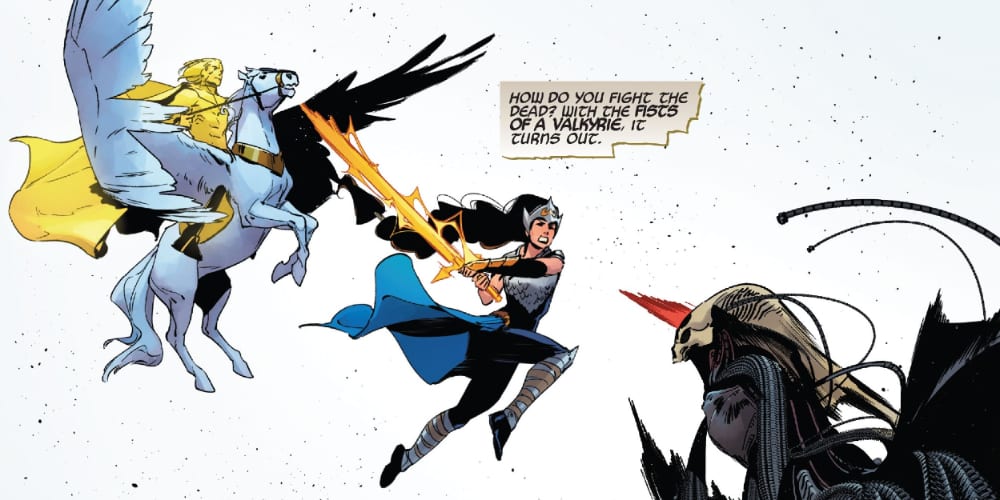 Ah AH Ahhhhh AHHHH! Thus, you now have Led Zeppelin stuck in your head. (Image: King in Black: Return of the Valkyries #1)

The Valkyries might seem out of place in King in Black, since the event is about an alien space goo’s god, but they fit right in here. Obviously, heroes are going to die—and when they do, they go to Valhalla. That is until a movie comes out and they return to the comics. Straightaway, she already has her first soul to ferry—the Sentry. In week one, King in Black #1, Knull ripped him in half, but in week six, he’s at peace with his death. However, since he died in battle,  Jane Foster, the only Valkyrie around, must bring him to Valhalla.

But, of course, this isn’t a simple Uber ride to the afterlife. Along the way, they are attacked by something in the “space between time and space” that specifically looks like one of Knull’s creations, even if it’s never identified as such. Basically, Knull invaded the afterlife. Markedly. as Jane and Sentry battle the symbiote tornado death thing, we see why Sentry really is a hero deserving a place in Valhalla: 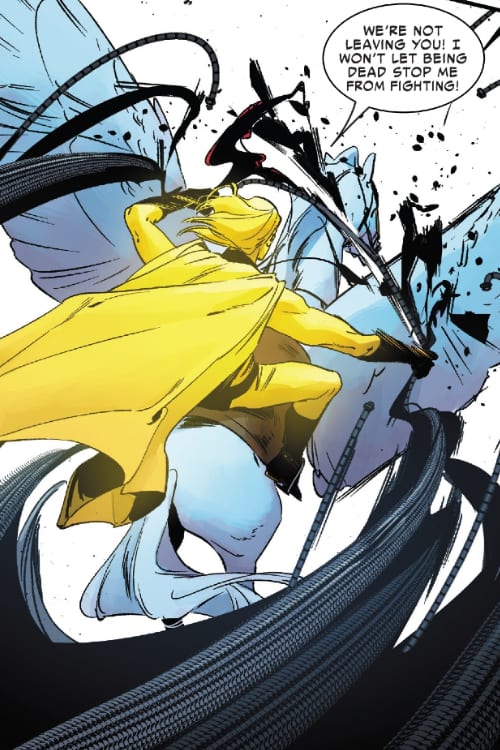 Henceforth, thou shalt always be known as a legendary bro. (Image: King in Black: Return of the Valkyries #1)

Unfortunately, Jane loses Sentry inside the vortex, but she pulls someone else out instead—a character who has no name but is one of the original nine Valkyrie! Undoubtedly, they really are coming back. Given that we’ll have Jane’s balance of grace and brutality along with this original Valkyrie’s recklessness, we’re probably going to have a lot of fun with this mini-series 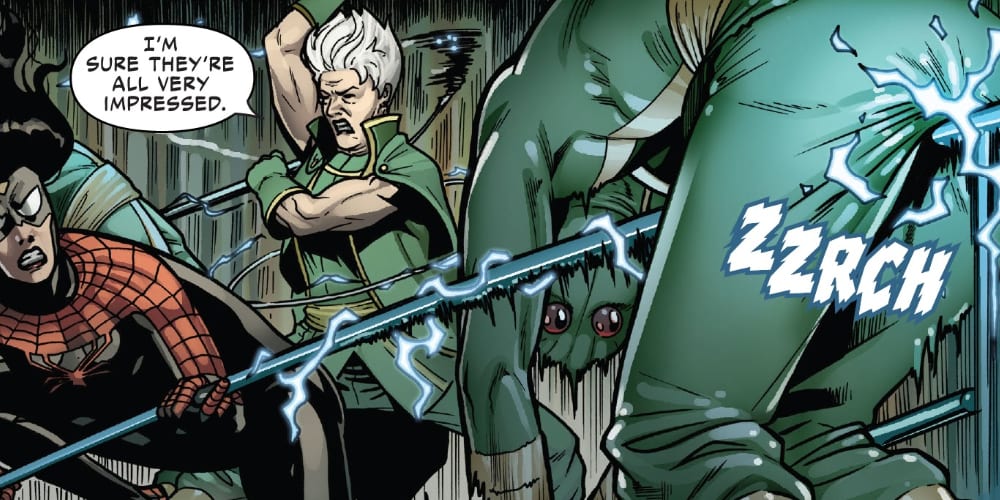 Hydra agent notwithstanding, you don’t do this to a guy, Spider-Woman! (Image: Spider-Woman #8)

Meanwhile, Jess, another bad-ass woman,  is not doing well. In the last issue, she got so out of control that Luke Cage, Iron Fist, Captain Marvel, Hawkeye, and a few other heroes had to contain her in a Hulk tank. But it doesn’t do much good. In King in Black Week Six, when she sees one of her villains approach her, she goes nuts and destroys the tank. To put it another way, Spider-Woman destroys a tank used to contain Hulk. Why? Because Octavia Vermis, who tried to kill her a few issues ago, had a vial of the medication keeping Jess alive (and herself). When Jess takes it and levels off, Octavia proposes a team-up. Afterward, Jess says she would never trust her. Of course, as Octavia reminds her, Jess took a medication out of Octavia’s hand without even blinking.

Spider-Woman is unhinged. Hell, even her enemies are concerned at this point. She’ll do anything to get better, but in the process, she’s behaving in a horribly self-destructive way. Despite the Knull invasion raging around her, Jess is single-minded. While steeling parts of research and supplies to make a cure, Jess goes as far as beating up War Machine and setting Stark Industries on fire. It’s painful to watch.

But on the bright side, we did see the return of Stegman, one of the dinosaur people living in the sewers beneath NYC. 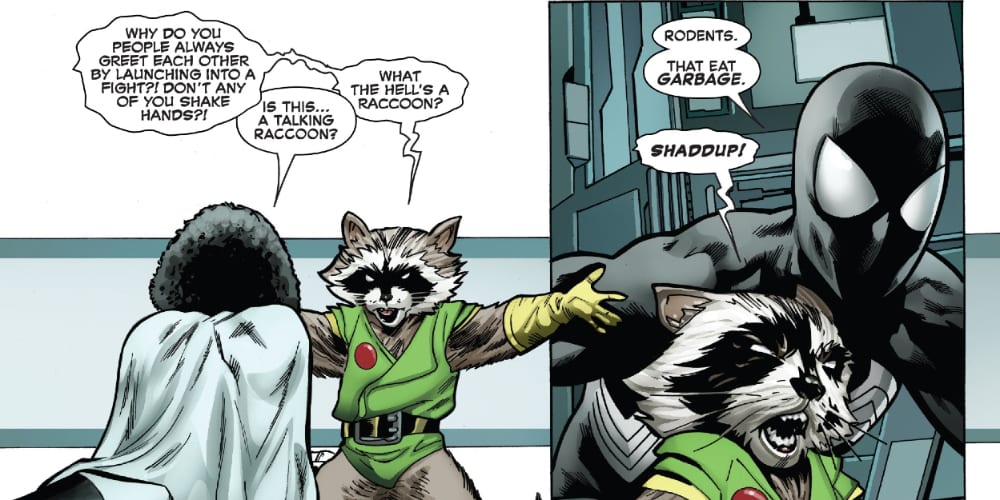 Peter David is great at taking the most random parts of the Marvel Universe and mixing them into one story. And in the Week Six issue of Symbiote Spider-Man: King in Black, we get to see that play out hilariously. First, when Rocket brings Spider-Man onto his ship, and Spidey sees Kang, the outburst is perfect—made even more comical when Monica Rambeau joins them. In fact, Kang saves her from a symbiote, and the first thing she does is attack him. Every time, Kang tries to explain that they are on the same side. And Rocket just finds humans weird.

Speaking of Rocket, when Spider-Man and Monica meet the future Guardian of the Galaxy, they have the same weirded out response (as seen above). This is just good comics, but there’s also a major reveal for the King in Black event. The Ebony Blade, which a shadow symbiote stole from the Black Knight, can harm Knull. They want to destroy it, but not even throwing it into the sun would do it. They need to find a special blacksmith in Knowhere. Good thing for them, though, that the symbiote is already there! It’s going wonderfully, until, that is when Ulik the troll crashes in.

Guardians of the Galaxy #10 Utilizes the Event Perfectly 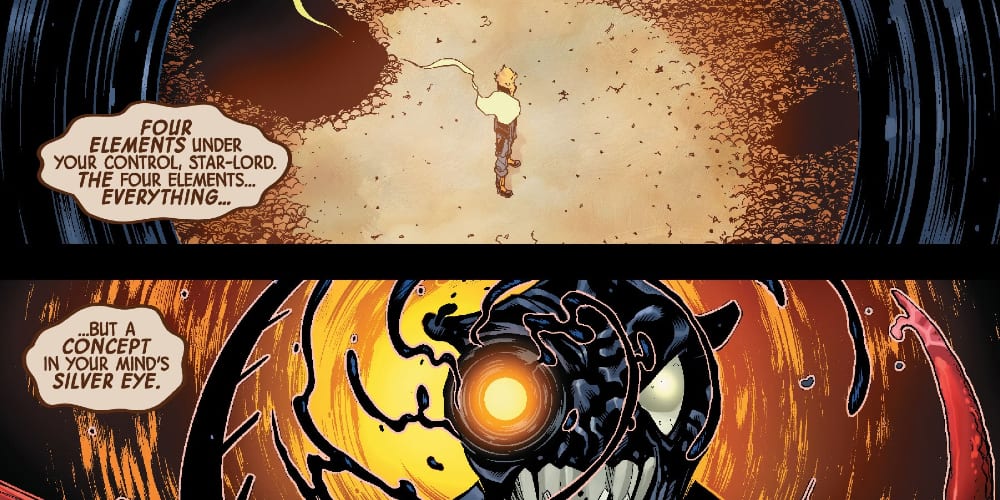 Like Spider-Woman #8, King in Black compliments Guardians of the Galaxy #10. When Knull’s dragons attack Spartax, Nova and his Guardians respond. And while they do, Star-Lord reappears, completely disoriented from his experience in another dimension altogether. And while the team is ecstatic that he’s back from the dead, they still have dragons to fight. Fortunately, Peter Quill got a powerup. He even goes into the dragon, joins the hive, and blasts Knull in the face with a supercharged Elemental gun. He’s not god-like, but pretty damn close.

With the Symbiote invasion thwarted (for one planet), Rocket and the others want to go to Earth to help fight Knull, but Star-lord wants nothing to do with that. In fact, he wants to go to a planet with no life at all because the New Olympian Gods are coming for him.

Aside from Peter’s return, though, we see the devastation Knull is leaving in his wake. Moondragon, a powerful psychic, completely breaks down as she feels over two billion people on Spartax die. So, not only did Ewing use King in Black as a good way to bring Peter back, but he uses Guardians of the Galaxy to expand on the main event. Very well-played.

There weren’t any duds here. In the other weeks, the quality was a lot more mixed but also featured no more than three titles. In Week Six of King in Black, we have five titles, all tie-ins, and they all worked to make the event deeper, richer, and more interesting. Maybe next week will be just as good! <Checks release schedule. Sees The Union #2> Ah, damnit.

And be sure to check out the other weeks too! (Checklist subject to change)

King in Black Week One: