How Strong Is Spider-Man? Greatest Feats In Comics -

How Strong Is Spider-Man? Greatest Feats In Comics 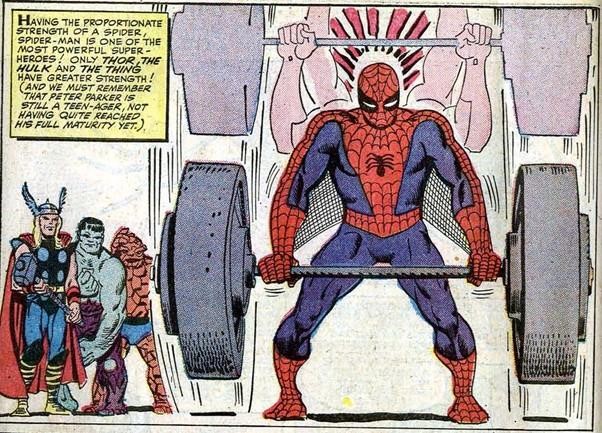 There is no doubt that the most iconic Marvel Comics superhero of all time and arguably the most popular superhero in the history of comic books is Spider-Man, who also has the most relatable story and personality out of all of the different characters we’ve seen in fiction. Of course, Spider-Man is also very strong and has some of the most impressive powers and abilities in the comic books. But how strong is Spider-Man?

Spider-Man has a strength level of 4 in the Power Grid of Marvel.com, and that means that he is capable of lifting many tons, as he is able to lift more than ten tons on a regular basis. However, in the comics, he has been able to keep entire buildings from collapsing due to the strength of his willpower.

While we do know that Spider-Man has the proportionate strength of a spider, he is also capable of surpassing his regular limits using the strength of his willpower, and that is why he is often one of the most inspiring Marvel Comics superheroes. Some would say this is plot armor on his part, but Spider-Man has always been capable of amazing feats all on his own. Now, let’s look at how strong Spider-Man is.

How Strong Is Spider-Man? 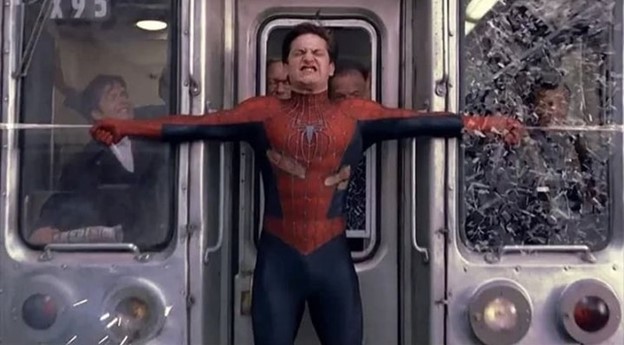 Throughout the history of Marvel Comics, we’ve seen a lot of iconic and powerful superheroes that have made their way to the pages of one of the most popular comic book companies of all time. However, not a lot of those superheroes are able to match the massive popularity of Spider-Man, who stands as arguably the most iconic superhero that Marvel Comics has ever had.

Of course, while we do know that Marvel is home to some of the strongest comic book heroes in the likes of Thor and the Hulk, Spider-Man has been very impressive in his own right because he is actually incredibly strong as well. And his strength comes from his spider physiology.

Peter Parker got his Spider-Man powers when he was bitten by a radioactive house spider. Of course, we know that spiders are actually quite strong in proportion to their size, as they have powerful limbs that allow them to perform incredible feats of strength for creatures that are as tiny as they are. And Parker obtained the same kind of proportional strength that spiders have.

In that regard, Spider-Man obtained physical abilities that far surpassed the limits of a regular human being as his physiology became similar to a spider’s in the sense that his strength increased in proportion to how strong spiders are for their size. As such, Spider-Man has superhuman strength that is given a level of 4 by Marvel.com’s Power Grid.

With that, Spider-Man’s strength allows him to lift around ten tons on a regular basis. In most cases, this seems to be the upper limit of his strength, although that isn’t always the case, as we will look at later. Spider-Man’s strength also extends to the rest of his body because he can jump incredibly high in a manner that’s quick and explosive due to his strong legs. On top of that, he is capable of surviving attacks that would normally hurt regular human beings or even other superpowered characters.

Another ability that Spider-Man obtained after his physiology changed is his web crawling. According to Spider-Man’s Marvel Fandom page:

Spider-Man’s exposure to the mutated spider venom induced a mutagenic, cerebellum-wide alteration of his engrams resulting in the ability to mentally control the flux of interatomic attraction (electrostatic force) between molecular boundary layers. This overcomes the outer electron shell’s normal behavior of mutual repulsion with other outer electron shells and permits the tremendous potential for electron attraction to prevail.

In layman’s terms, the change in Spider-Man’s physiology allowed him to mentally and almost instinctively affect the attraction between the surfaces of different objects. This power is mostly concentrated on his hands and feet, as he is able to stick on walls in a manner that seems to be second nature to him. At one point, he was able to make his mask stick to his face when he prevented Anti-Venom from taking it off.

Spider-Man’s enhanced physiology also increased his reflexes to a point where they are 40 times greater than a regular human being’s. That means that he can react and move 40 times faster than any regular human being whenever he needs to react quickly to a certain situation. Combined with his Spider-Sense, which allows him to instinctively sense any incoming danger, Spider-Man can react to any kind of attack and move accordingly on instinct without having to think about what he needs to do next.

But as powerful as Spider-Man’s physiology may be, it is his indomitable will that has allowed him to win battles that he shouldn’t have won. His desire to be someone bigger than himself and to be a hero to his family, friends, and the people of New York and the entire world allows him to mentally will himself to victory and come out stronger than ever. And he is able to do so despite the fact that he struggled to juggle the different aspects of his life, such as his personal relationships, jobs, schoolwork, and superhero duties.

Spider-Man’s Greatest Feats In The Comics

As strong as Spider-Man may be, one would think that his strength pales in comparison to what iconic heroes like Thor and the Hulk are capable of. But the fact is that Spider-Man’s powerful will is what has allowed him to accomplish great feats in the comics.

At one point, Spider-Man was able to lift the entire Daily Bugle building above his shoulders when the Green Goblin used one of his bombs to bring the building down. Not willing to allow the building to crush Mary Jane, Peter Parker summoned all of the strength in his body to keep the building from completely crashing. And Spider-Man did the same with Penn Station when the structure was about to crash on him, as he remarked that even Thor himself would struggle with this kind of weight.

In The Amazing Spider-Man #328, Spider-Man used his strength to fight a rampaging Hulk on par, as he was able to punch the angry beast all the way to the low orbit of Earth. As such, he has enough strength in his muscles to actually launch someone through the planet’s atmosphere. But fans should take note that he wielded the powers of Captain Universe in that fight. Otherwise, he probably would not have been able to do that to the green giant.

However, the greatest feat of strength of Spider-Man in the comics is a display of just how strong his willpower is, especially when it involves the people that he loves. Possessing a medicine that could save Aunt May’s life, Peter Parker found himself in a battle with the Lizard, as he got swept under countless tons of iron. This happened in The Amazing Spider-Man #33.

As he was about to get crushed, Spider-Man didn’t think about himself but thought about how he failed Uncle Ben in the past. Not wanting to fail Aunt May at the time that she needed him the most, he mustered up all of his strength to defy the odds and lift himself out of that situation to save his beloved Aunt.