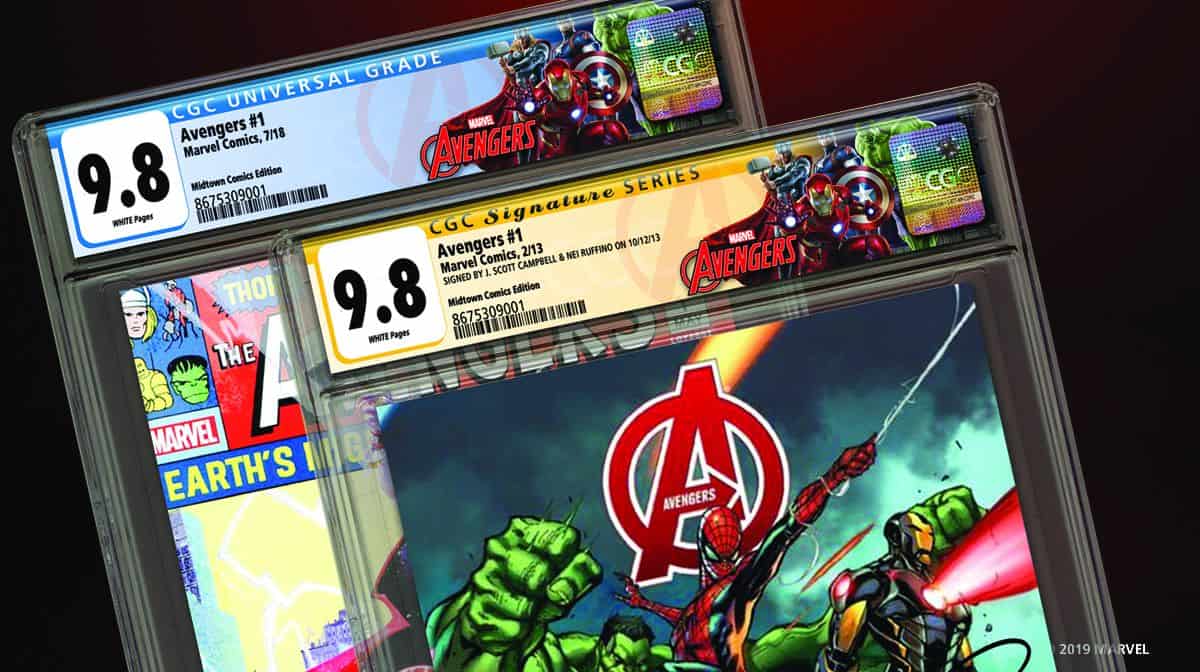 Marvel comic book collectors growing tired of looking at the same old labels now have an alternative thanks to Certified Guaranty Company (CGC). Collectors can adorn their prized comics with a popular quartet from the Marvel universe. The classic Avengers – Thor, Captain America, The Hulk, and Iron Man – join CGC’s new line of certification labels to spruce up graded collections.

Thor, Iron Man, Captain America, and The Hulk arrive on the scene in a vibrant print, set against a blue or yellow label and stamped with the official CGC seal. CGC’s release of the Marvel Avengers label is part of an ongoing agreement between the grading company and Marvel. Avengers fans can add the new Marvel labels for $5 when they submit their comic for certification through CGC’s submission process. Only comics published through Marvel can receive the colorful, officially licensed limited edition label.

Comic book collectors can have their rare and limited edition comics encapsulated with Marvel’s Avengers via CGC’s official website. CGC requires a paid membership in order to submit for grading. The free membership only allows for submissions at shows. Owners can send their comics for the new CGC released Marvel Avengers throughout the remainder of 2019.

Submitting Marvel comic books puts them through a rating process based on an established grading standard. Comics ultimately receive a quality score from .5 to 10. Once graded, comics are encapsulated and provided a label. Included in the label is a score and an identification number specific to the graded item. The $5 fee for the CGC released Marvel Avengers label does not cover grading services.

The grading topper is a replacement for the first Marvel set. The original set was first revealed in March 2019 at the Chicago Comic & Entertainment Expo. Originally printed with Captain America, Iron Man, Spider-Man, and Captain Marvel, The Hulk and Iron Man replaced the webslinger and Carol Danvers in favor of a more classic lineup. Though Captain America wasn’t initially part of the first Avengers, he joined by Issue # 4. Captain Marvel and Spider-Man arrived much later in the team’s lifespan.

The news of the new label comes within weeks of the release of Avengers: Endgame. Following the events of Infinity War, Endgame features the remaining Avengers dealing with the fallout of Thanos’ snap. With help from previously absent allies, the original Avengers must find a way to stop Thanos and return their lost allies.

Whether or not CGC and Marvel will be releasing a third variation is currently unknown. Considering how early it is in the year, however, the chances are high.