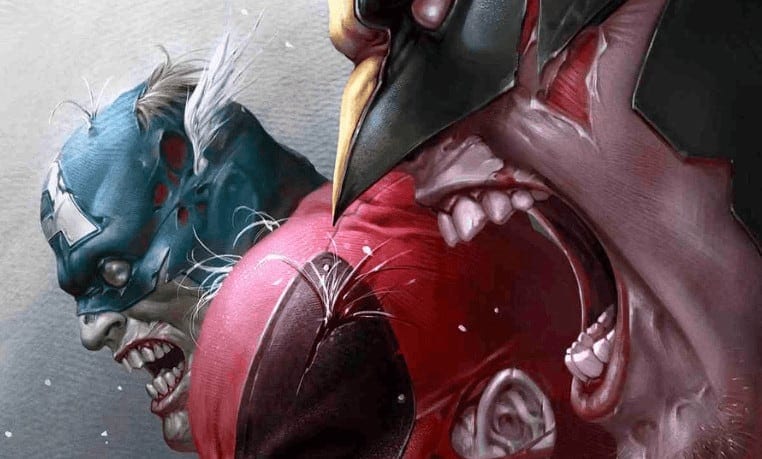 What’s better than a traditional zombie story? How about a world where all the superheroes were undead? That’s Marvel Zombies, one of Marvel’s most surprising successes. Since the series is coming back this October, let’s take a look back at our favorite walking super-corpses and how it all started.

The undead heroes of Earth-2149 first appeared in an unlikely series. You would think Blade or Deadpool, or at the very most, Doctor Strange. They actually appeared in Ultimate Fantastic Four #21, by Mark Millar with art by Greg Land. The zombified Reed Richards tricks the Ultimate Reed Richards into opening a portal to the Zombie-verse. Mr. Fantasti-Zombie might be the most fun version of the stretchy genius. When Ultimate Reed steps through the portal, thinking that he will meet a more not-dead version of himself, Zombie Reed cruelly askes “Ever get the feeling you’ve been had?” They battle it out, with Ultimate Reed finding a way to make sure the Zombies can never invade his universe, and that’s that. For the Ultimate universe, at least.

For a Marvel Zombies limited series, what better writer to get than the Zombie King himself, Robert Kirkman? By this time, Kirkman’s Walking Dead series (which came to a surprise end on Wednesday) was already popular, and a good three years into its run. Kirkman writing zombified superheroes was a perfect match. He didn’t just write a story where superheroes go around eating brains—he took all the elements of a true Marvel event and zombified it. This includes an undead Avenger team, a battle with Magneto, and then the big man himself, Galactus. At the time, we didn’t know we needed a story where a Zombie Avenger team fights the devourer of planets. Then it happened, and the world’s a little better for it.

The Living Dead Keeps on Living

Marvel Zombies was a hit. So what do major companies do when a franchise makes money? Sequels! Prequels! Spinoffs! Crossovers! Yep—Marvel Zombies got all of these. The first one, however, was destined to happen: Marvel Zombies Vs. Army of Darkness. That’s right, Ash vs the Marvel Zombies in an absolutely bonkers story. By the time it’s all over, the Zombie-verse is more dangerous than it had been before.

Rise of the Dead Sequels

Not just one or two—three sequel series. And the Dead keep getting bigger. In Marvel Zombies 2, Phoenix, Gladiator, Firelord, and even the mad Titan himself, Thanos, all fall to the Zombie plague. You might think that a character like Ego the Living Planet is safe, being that he’s a planet and all. But no, he just becomes the biggest zombie buffet in the universe. Kirkman’s second installment almost makes the first one look quaint.

For Marvel Zombies 3, Fred Van Lente takes over. While his work doesn’t have the same grandiose vibe that Kirkman’s had, his stories are still fun—especially since he brings the zombies to the “real” Marvel Universe, Earth 616. But Van Lente’s Marvel Zombies 4 is surprisingly fun. The third sequel is actually more about the Midnight Sons than it is about the Zombies, but this also gave it a fresh feeling with a series that Marvel probably didn’t expect to last past the first.

Kirkman came back after a few years to write Marvel Zombies: Dead Days, which explained how the plague started and spread. It was a good surprise—but it was like ten years ago, so spoiler rules don’t apply……..SENTRY. Yeah, a high-powered, godlike hero falls to the virus first. The rest of the heroes really didn’t have a chance. There was also a Marvel Zombies Return, which featured some fun one-shots for various characters.

The undead heroes even had a major part to play in one of Marvel’s biggest events in the last decade: Secret Wars; Black Panther uses the Marvel Zombies as his own personal army. Speaking of Black Panther, the zombies made a cameo in his series during his tenure with the Fantastic Four post-Civil War. Also during Civil War? Spider-Ham accidentally finds himself in the Zombie-verse and turns into “Undead Ham.” Poor hammy.

Marvel Zombies’ popularity didn’t stop at the comics. There were action figures, mini busts, Heroclix, and even Minimates. It’s almost weird that everyone’s favorite reason to spend eight bucks—Funko Pop!—hasn’t made a few dozen of them yet.

The Future is Dead

We don’t know anything about the new series coming out. However, it’s been a while since we’ve seen a Marvel Zombies series. And Robert Kirkman did just wrap up The Walking Dead. Maybe he’s not quite done with zombie stories? Regardless, whoever comes back, please just give us Zombie Groot. He could go around saying “I am Zombie!”