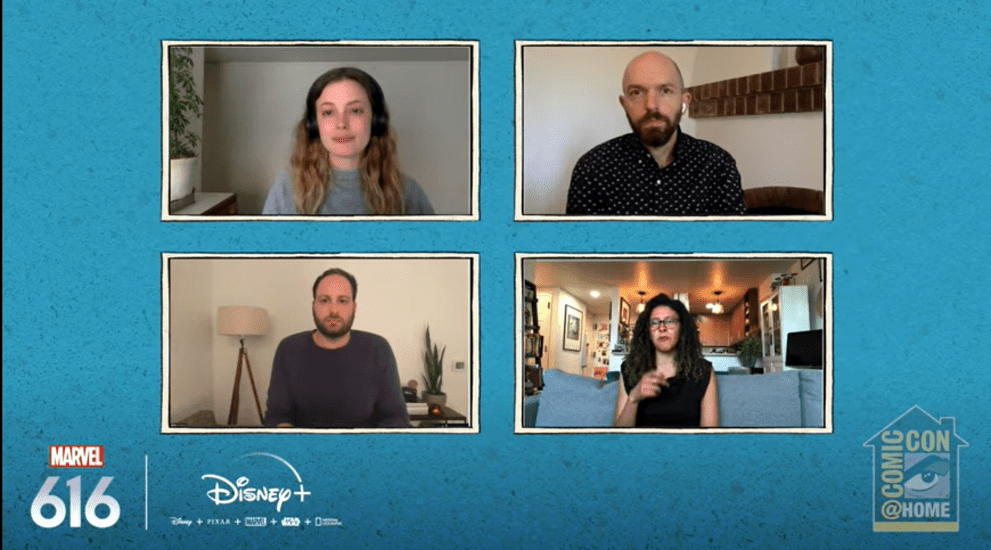 Are you a hardcore Marvel fan that can name every single superhero? Awesome! Or maybe you’re only a casual viewer who keeps up-to-date with the movies, but nothing more. That’s great, too! A new docuseries is heading to Disney+ soon, and it’s ready to prove just how much more there is to learn and how important it is to find out new things about what we love! The Marvel 616 Comic-Con at Home panel gave us in-depth insight, sneak peek clips, and plenty of reasons to get excited about the series! You can watch the entire panel below.

The Marvel 616 Comic-Con at Home Panel

This panel at the Comic-Con @ Home event explores the upcoming Disney+ series of documentaries. Gillian Jacobs and Paul Scheer, two directors of the show, speak about what attracted them to their respective episodes, and how the history of Marvel relates to their experiences. They are joined by Sarah Amos and Jason Stermon, executive producers of the show. Angélique Roché is the moderator of the virtual Marvel 616 Comic-Con at Home panel.

Marvel’s 616, which will debut on Disney+ this fall, will tell a collection of different stories that relate to the rich history of Marvel. Each episode will serve as a documentary that is almost like its “own individual film.” Sarah Amos adds that each episode deserves its own vibe. This honors the tradition of Marvel characters being so unique. So, by having the series be an anthology, they are able to respect each story as a separate, yet cohesive entity into the massive world that is Marvel.

Earth-616 is the main continuity where many Marvel stories exist. This title has been referenced in many comics, including Uncanny X-Men, Deadpool Kills Deadpool, and Marvel 1602. The series’ title is, therefore, able to serve as a reminder that so many wildly different tales take place throughout the company’s works, yet they all belong to the same home.

Both Amos and Sterman remind viewers that the stories aren’t for one viewer alone. They are meant to be accessible for casual viewers and newer fans, while also teaching the hardcore fans something new. Amos adds that she finds it fitting to be presenting the information at an SDCC panel, as they often considered the “San Diego crowd” when deciding which stories to showcase, knowing how much they would value certain things.

Gillian Jacobs, best known for her acting work in Community and Love, is the director for an episode of Marvel’s 616. This piece of the docuseries looks at Marvel’s history from the perspective of women working in the industry, which has historically been led by men. Different women who have had an impact on the comic book industry are highlighted, including Sana Amanat.

Amanat is a co-creator of Ms. Marvel, whom she partially inspired. Kamala Khan is an American Muslim character living in New Jersey. After discovering that she has the ability to shapeshift, she names herself after her personal hero (Carol Danvers, of course).

Many of you probably think that Ms. Marvel seems like a fun and quirky badass female character. While you’re right, it’s important to remember that this story may not always have been as well-received as its been. The sneak peek of this episode has writers of the comics share the initial disbelief of Kamala’s creation, fearing that fans of Marvel wouldn’t positively take to her.

Jacobs shares that her original inspiration for choosing this kind of story to tell was the desire to learn more about how Marvel came to be the way that it is now. We’ve seen plenty of incredible female and BIPOC driven stories, from Black Panther to Ms. Marvel and Captain Marvel and Jessica Jones. Marvel has become increasingly diverse, telling meaningful stories from various perspectives. The episode Higher, Further, Faster will hopefully teach us more about how that lengthy process looked.

You can watch the preview for the episode below.

Lost and Found is another episode of Disney’s 616, and is directed by Paul Scheer. Unlike Jacobs, who confesses that she wasn’t an avid comic fan in the past, Scheer has a previous connection with both Marvel and comic books. He’s written series such as ALIENS vs. PARKER and has worked on Marvel properties.

Scheer’s episode takes a deep dive into the characters of Marvel that aren’t as well known. Not every character can be an Iron Man, and Scheer recognizes just how important it is to tell these lesser-known stories. Characters that are discussed include Dr. Druid (a.k.a. “The Bargain Basement Sorcerer Supreme) and Typeface (who takes his name a bit too literally).

Scheer wants us to respect lost and forgotten characters. He also wants to remind viewers that any story can be retold and find success. There are so many characters that belong to Marvel, and they can always be brought up again. He relates this concept to Black Panther, who he believes was a character that took a while to find success. It wasn’t until Reginald Hudlin wrote the character that Scheer realized just how much potential he had.

Check out the preview for Lost and Found below.

Comic-Con At Home Continues To Impress Us

Over at Comic Years, we’re pretty bummed out about Comic-Con’s physical event being canceled. We’re sure that we’re not the only ones! However, the virtual event allows far more viewers to learn more about their favorite shows and movies, while also learning about the future for many upcoming titles. While the con might be more public, it’s never been so intimate. Having a distraction-free panel like the Marvel 616 Comic-Con at home panel allows us to learn everything that we need to.

Are you eager to watch Marvel’s 616 when it hits Disney+ later this year? We want to hear what stories you hope are covered. And be sure to let us know which Comic-Con @ Home panels you’re attending this week!