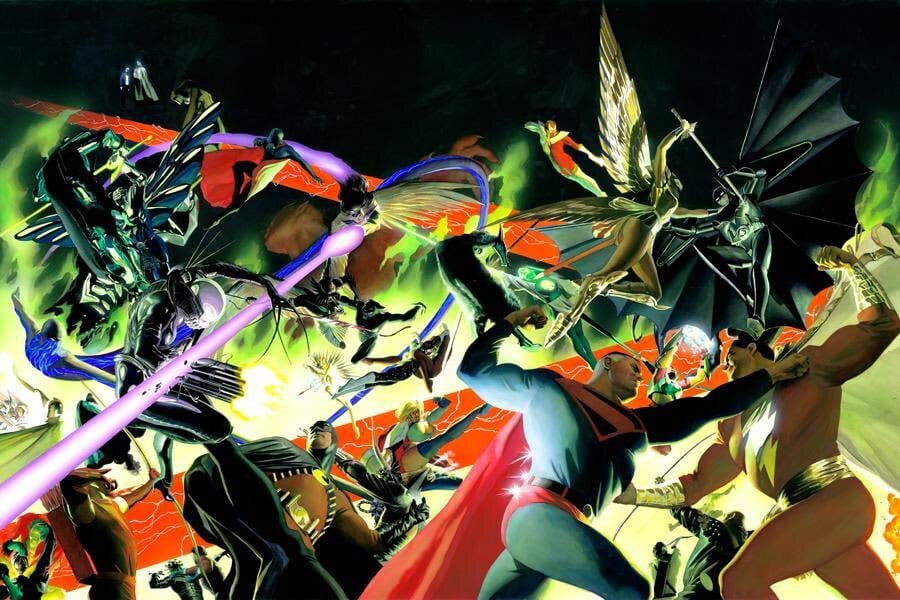 The DC pantheon is enormous. It’s scattered across decades of storylines that have begun, run, been considered seminal, ended, and been replaced by yet more seminal works. For the people who have grown up with comics, understanding the canon is easy: they’re the stories they’ve known for as long as they’ve known themselves. For others, getting into the DC universe is as difficult as getting really invested in Marvel comics or French Romantic-era literature. Just like the dense but delightful works of Honoré de Balzac, DC poses a considerable library of characters who are at once the heroes of their own stories and the side-characters in the tales of others. Also they often take place in the same city. And at least one has red hair. Honestly, the similarities are startling. In either case, entering a comic universe can be confusing if you don’t find an accessible starting point. On the exact opposite end of the accessibility spectrum is Kingdom Come, a DC miniseries. and the comics that introduced me to DC as a whole. To date, I have not found a potentially more confusing introduction to DC comics than Kingdom Come.

Kingdom Come, an Introduction to DC Kingdom Come was published in 1996 and ran for four issues. It is widely regarded as one of the best DC stories around, and it is home to some of the best artistic renderings many DC characters have to their name. Kingdom Come was written by Mark Waid and included paintings by Alex Ross, whose art style brought to life one of the most confusing entry points into the DC universe you can find, even if you consider Batman’s dream sequence in Batman vs. Superman.

Spoiler warning for the entirety of this series that came out 25 years ago. The story of Kingdom Come is simple. The Justice League has abandoned humanity after the rise of more violent heroes who still gain fervent public support. One such hero, named Magog, fails to capture a villain who then rips open Captain Atom and blows up most of the Midwest. Superman, now older and retired, is called back into action by Wonder Woman. Together, they recruit heroes old and new to fight the increasingly violent groups of villains and villainous heroes. Three factions emerge: a league of villains led by Lex Luthor, a league of Batman’s buddies, and most of the Justice League returned to action and beautifully depicted by Ross. They fight. Wonder Woman stabs a guy through the chest. Shazam is mind-controlled by Lex Luthor and made to fight Superman. It’s an ensemble cast and they’re all punching each other. Then America nukes them. Superman sees a massive loss of life, thinks his comrades and age-old enemies have all been vaporized, and gets mad. Just as he is about to slaughter the entire United Nations, he learns his friends have survived. 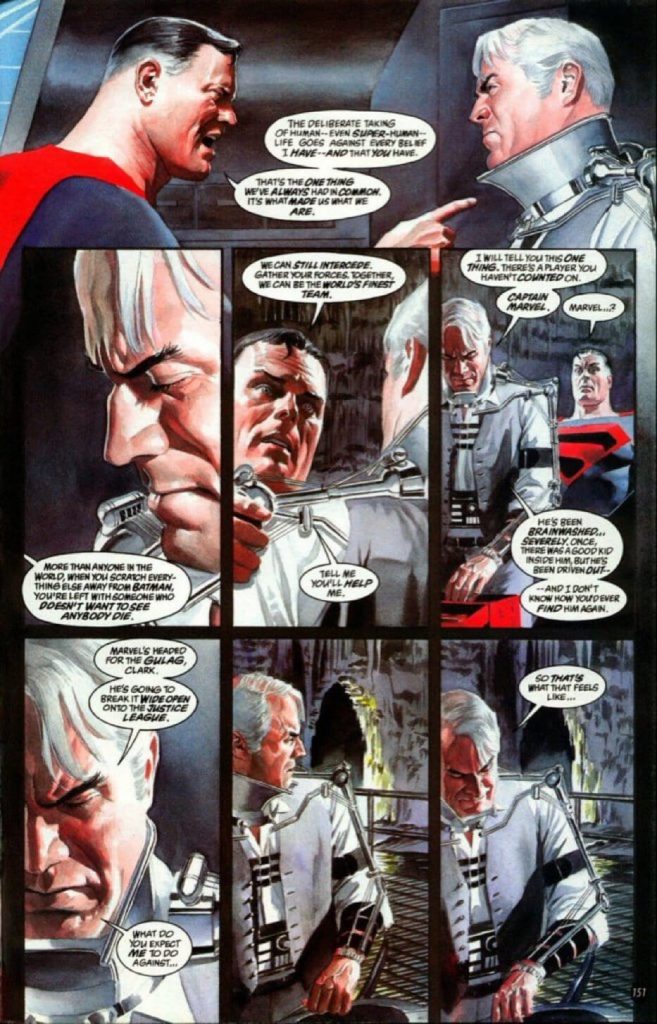 The story resolves with Superman entering a new political phase of his hero-ship. The final pages show Superman and Wonderwoman getting breakfast with Batman at a superhero-themed diner. Batman is recruited to be the godfather of Superman and Wonderwoman’s child and it all feels very much like an ending, not just of the comic, but an ending for the characters as a whole. Oh, and all this is told through the frame story of a pastor, Norman McCay, being guided Ebenezer Scrooge-style by The Spectre, an agent of divine wrath named James Corrigan. Also none of it was canon.

All told, as rad as it is and as much as it continues to be my favorite of any DC story, Kingdom Come is a terrible introduction to the DC universe.

Stories like Kingdom Come rely on a pool of existing knowledge their audience can draw from, and that’s what makes them incredible for people initiated in the lore and absolutely baffling for people who aren’t. In four issues, Waid and Ross craft a story that reimagines much of the DC universe while also relying heavily on the audience having a knowledge of what has been reimagined. That reimagining can only have effect if the audience knows it’s there otherwise it just seems like all of DC comics have a very bleak last chapter. Costumes are changed or reverted to much earlier versions. Characters have their development go in a what-if direction, often completely different from other issues or an enhanced version of who they already were. Batman, for example, is older and turns Gotham into a police state. Only, the police are robots and the robots are bats. This is a direction his character could go and has kind of gone before, but seeing that character fully realized and developed throughout this whole series is intense on its own, but he’s only one of many established characters who have been taken further than they had before. People who know DC are getting two stories: the actual plot of the series and the implication of a story that led to this point. People who are new to DC, me, were getting an angry Superman and cyber stalker Batman. Kingdom Come was a lot of things, but a good introduction to DC did not feel like one of them.

Reading Kingdom Come blind is kind of like going into Star Wars: A New Hope with no knowledge that it’s part of a series. Everything is bleak. People are old but they clearly have had rich lives before that. The antagonists aren’t just powerful, they have been powerful for years. They won, and now the story is about a group of people picking up the pieces and trying to bring things back to a sense of normalcy that the audience has never ever seen. Peace is theoretical and everything is a little bit dirty.

What Do We Take From Kingdom Come: A Destination That Says More About The Journey

Kingdom Come is pretty much the worst possible introduction to DC comics. It’s confusing, relies on a lot of knowledge of the characters, and it can be absolutely devastating. You see so many of these untouchable icons at their lowest, but even then, there is something awesome that can be gleaned from this series, whether you’re going in blind or fully immersed in the canon.

This story gives you these old heroes struggling with who they are through the lens of who they used to be. Through that, you can get a really unique look at the DC canon. Seeing an old flawed Superman gives depth to his often pristine past. Seeing Wonder Womanfully at war confirms her intensity. Seeing a Batman who would absolutely look through your search history shows the depth of his zealotry which was only barely contained when he was matched by equally insidious villains.

Kingdom Come was an incredible series that gave fans the chance to see an alternate future where characteristics of their heroes were enhanced by age and exhaustion. It’s an ending that gives meaning back to the series and the characters it’s a departure from. 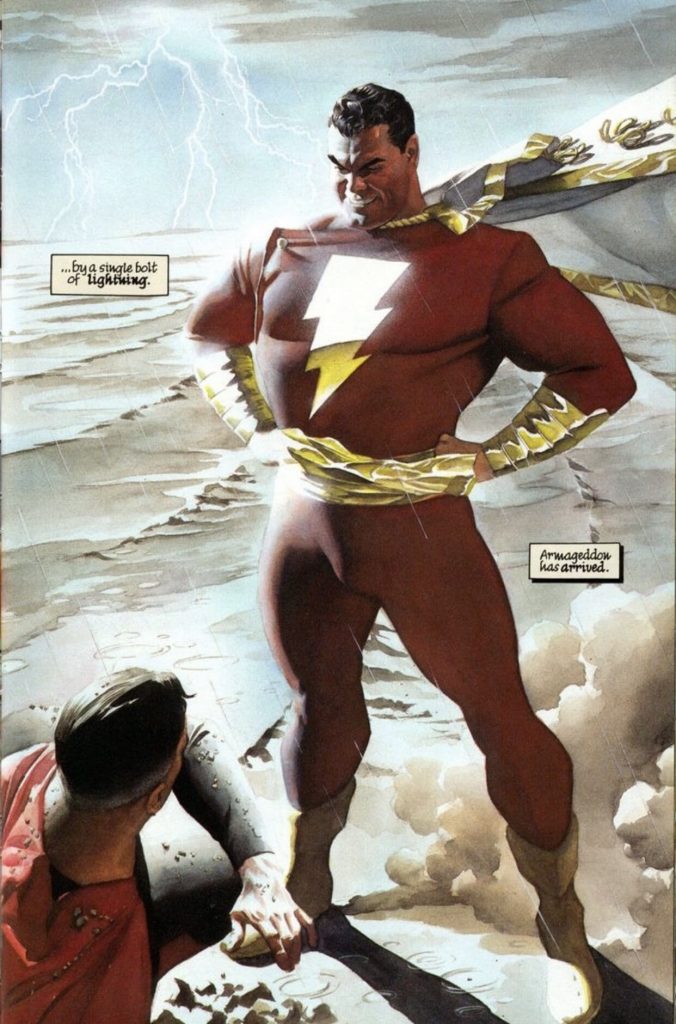 What was your entrance into the DC universe? Were you confused the entire time or did you feel like you had a good handle on things? Tell us about it in the comments!