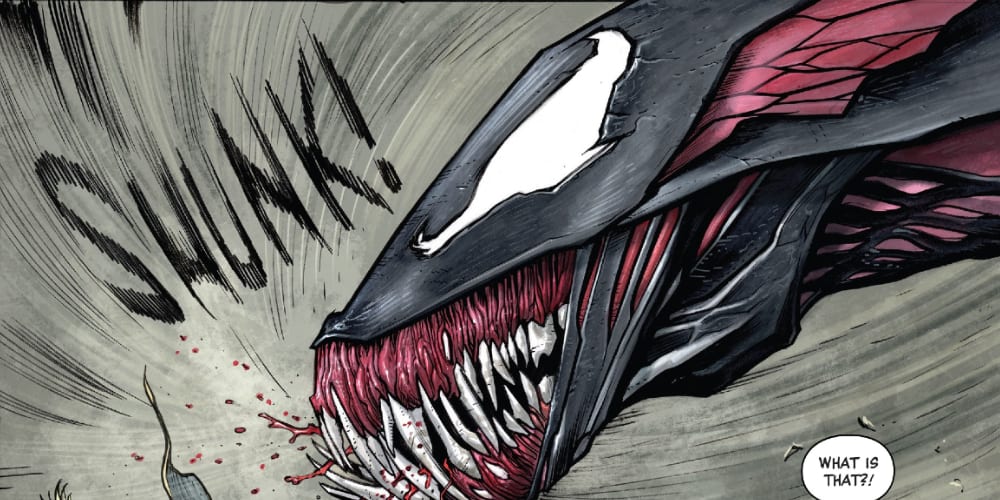 The days are growing darker in the Marvel Universe, and with week seven, we’re almost to the halfway mark of the King in Black event. So, what does this mean? Obviously, MORE COMICS! When the event started, there were two or three comics each week. Now we’re looking at five or six each week, for the most part. However, the bigger an event gets, the riskier every tie-in gets. Events like Civil War had so many tie-ins, the event became inconsistent. On the other hand, events like Fear Itself, had many great tie-ins, making the main series the story people least looked forward to. Likewise, perfect balance is rare, but Siege or Flashpoint are good examples of well-balanced events. So, how about King in Black? So, is it too much, not enough, or just right?

Well, Goldilocks, that depends on how epic you want your event. Without further delay, let’s take a look at King in Black Week Seven. 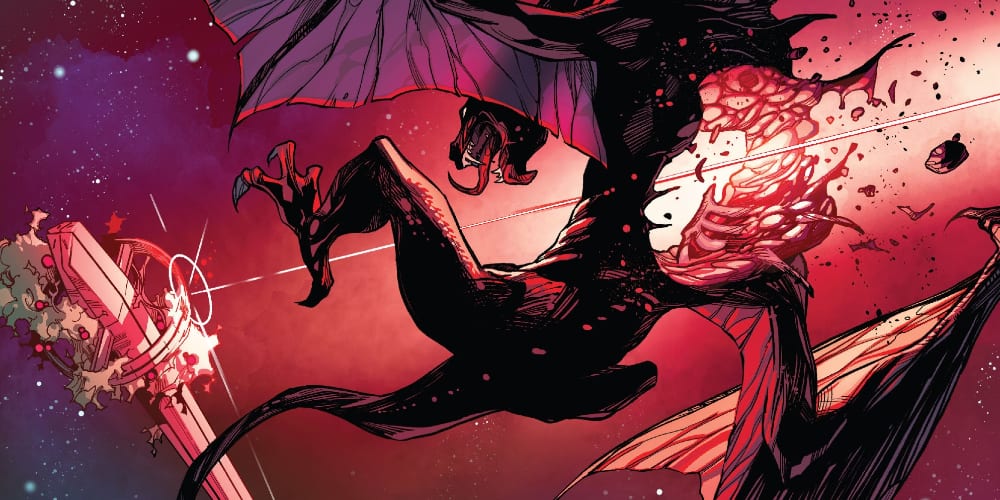 How to kill a dragon. (SWORD #2, Marvel Comics)

On Earth, the Avengers are struggling in their fight against the primordial symbiote god Knull. But in space, on the Peak Station, Abigail Brands calls that Tuesday. Within twenty-eight pages, Brand proves that she is a better leader in a crisis than Tony Stark, T’challa, Nick Fury, and Captain America combined. Knull blocked communications? Straightaway, her team finds a way to communicate. The Five, the mutants responsible for resurrecting all mutants? She certainly has a plan to keep them safe. Guess what? She wants to make sure the fight against Knull remains an interstellar focus instead of Krakoan? That’s right. She has another plan for that. Forget Moon Knight; Abigail Brand is henceforth Marvel’s Batman.

Events in the Marvel Universe unquestionably collided perfectly for SWORD to enter King in Black in Week Seven. Firstly, there was Empyre, where the Avengers screwed up by not including Alpha Flight and Brand. Secondly, we had X of Swords, where Cyclops revitalized SWORD. Now there’s King in Black, where the agency is vital to Earth’s survival. So, as Mentallo shows up to protect the Five in his “think tank,” and Fabian Cortez enhancing the mutants around him to fight the symbiote dragons, we get to see how much SWORD has to offer. What did we learn most? Most important, Abigail Brand is a BAMF. Additionally, Cable under the control of one of Knull’s symbiotes is terrifying. 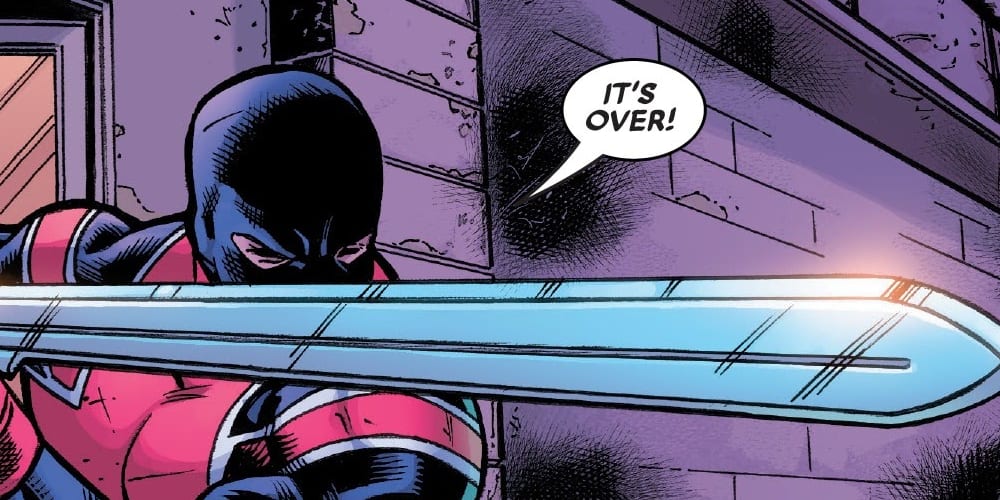 For queen and country, I hope it is. (The Union #2, Marvel Comics)

Just a reminder—this tie-in was previously for Empyre. The fact that they could make just a few changes and make it a tie-in for another event was definitely a sign that this wasn’t going to go well. But event or not, this is just a bad book. The new heroes are petty and uninteresting. There’s no reason to care about them. What’s more infuriating is that even the mainstay hero, Union Jack, comes off horribly. At one point in the narration (I’m not sure who was narrating), it says, “They did their bit. Now it’s up to other people to do theirs.” I’m sorry, I must have missed the part in superhero-ing 101 where you just stop helping when you feel like you’ve done enough, the skies covered in symbiote goo be damned.

Furthermore, what makes this more painful is that it comes in King in Black Week Seven and has to compete with SWORD. Because in one comic, the hero is working on a way to solve everything. Meanwhile, in the other comic, the heroes take down a handful of symbiotes and quit being superheroes. And this is supposed to be Great Britain’s premier team? Oh, and still not even a passing remark about Excalibur and Captain Britain. Not even an “ever since a mutant became Captain Britain,” or something similar. That’s all they needed. Okay, let’s move on to better comics.

Gwenom Vs Carnage Is How You Write a Jumping-on Point 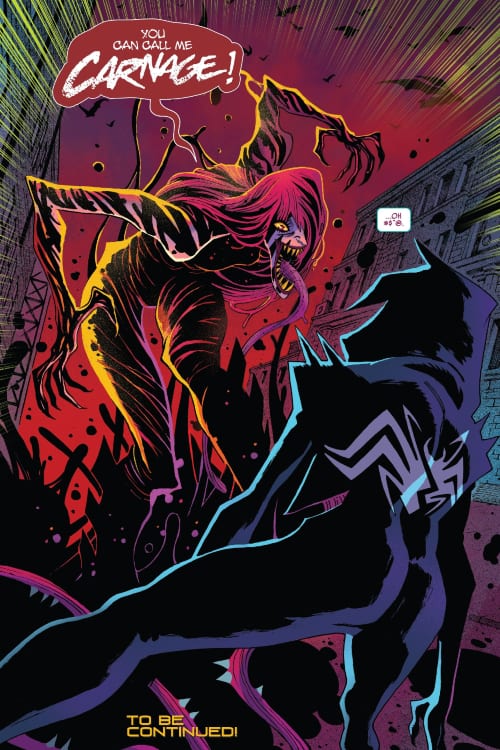 When you’re a superhero but you get in a fight with your BFF…(King in Black: Gwenom Vs Carnage #1)

I haven’t read any comic featuring Spider-Gwen before this one. I know her from Spider-Man: Into the Spider-Verse, but when it comes to the actual comics, I couldn’t tell you how she got to Universe 616 or how she got her powers, or anything else. Within a few pages of King in Black: Gwenom Vs Carnage #1, I got almost all of that. McGuire expertly introduces Gwen to new readers while incorporating the massive event and setting up Gwen’s own conflict: Carnage.

But this isn’t Cletus Kasady in the red goo. In King in Black Week seven, McGuire and Flaviano introduce us to the new Carnage: Mary Jane Scott—from Spider-Ghost’s universe. But all you need to know, McGuire tells you. Mary Jane and Gwen Stacy were close before Gwen was ripped away from her universe. And because McGuire instantly makes Spider-Ghost a likable character, we’re immediately concerned with this new incarnation of Mary Jane too. It’s a well-written comic with great art—just what we need to almost forget…the last one we read. 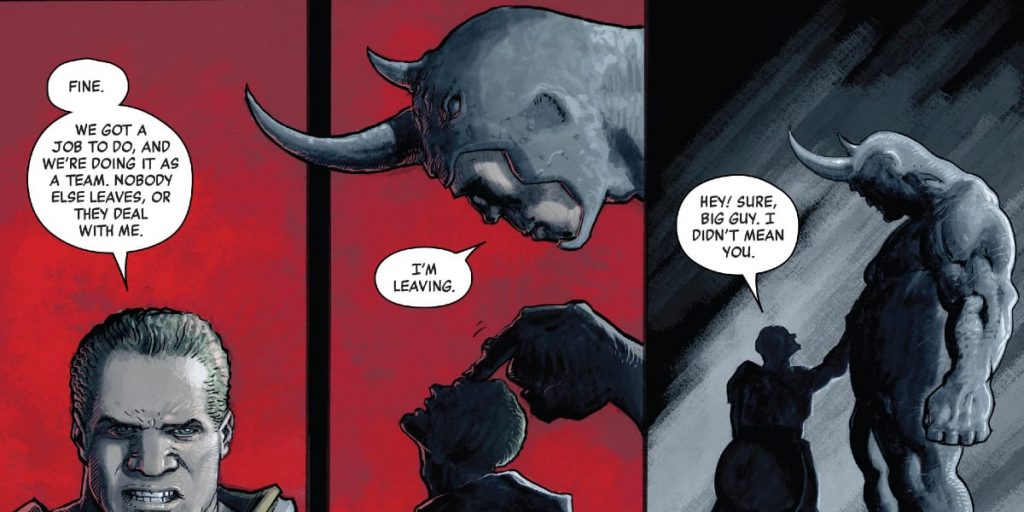 When the Thunderbolts first debuted, they weren’t villains forced to be heroes; they were villains pretending to be heroes in order to take over the world. Baron Zemo was their first leader! However, as the team changed, they slowly got more and more similar to the Suicide Squad. Now they are basically the same, but with no neck-bombs. However, when one potential member denies Kingpin’s offer, he’s…offed.

Does this make King in Black: Thunderbolts a bad comic? Absolutely not. Instead, it’s an injection of dark humor into an event that, for the most part, is just dark. Sure, Kingpin is basically Amanda Waller, and Taskmaster is essentially Deadshot. But their Killer Croc, or King Shark—Rhino—doesn’t even fight. He just walks off. Thunderbolts #1 might not be the best King in Black tie-in for Week Seven, but it’s by far the most fun. (Oh, and the featured image? One of the funniest scenes of the entire comic. To see who the dragon gulped up, be sure to read it!)

King in Black: Planet of the Symbiotes Should Have Started in Week One, Not Week Seven

With how many symbiotes we’ve seen over the years and the growing potential for new ones, an anthology series is an obvious choice. In fact, it should have come sooner and been longer. We’re only getting three issues, and probably six stories in all. Still, the anthology is off to a good start, with a classic symbiote and a new one in King in Black. Now, let’s take a trip to the PLANET OF THE SYMBIOTES! 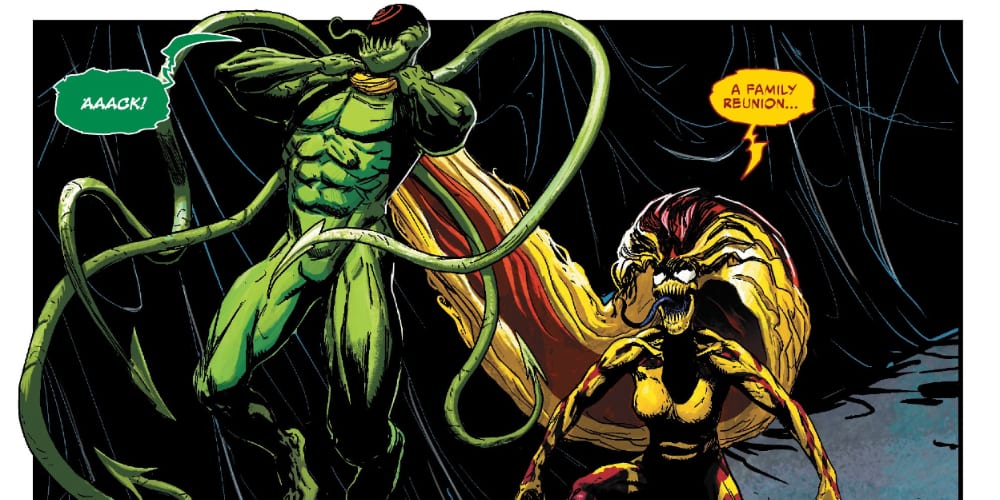 Still less violent and better looking than mine. (King in Black: Planet of the Symbiotes #1, Marvel Comics)

Venom’s had a few spawns—Carnage being the most notable. During Separation Anxiety, we got Riot, Lasher, Agony, Phage, and Scream. They’ve had various hosts over the years, but during Absolute Carnage, Scream bonded with Andi, a former Venom who trained with Flash Thompson. Andi/Scream is unlike any other Venom variation. Not only does she have her own sonic scream, but because of a hallmark, she’s also invulnerable and can control fire. Both of which are deadly to symbiotes, generally speaking.

Later in the event, Scream will get her own one-shot, but this was a nice reintroduction to the character. And Vilanova’s art is undoubtedly insane. He loves drawing some symbiote teeth like webbing made out of teeth. Enjoy your nightmares!

Meet Plague, the Newest Terror to Come Out of Ravencroft 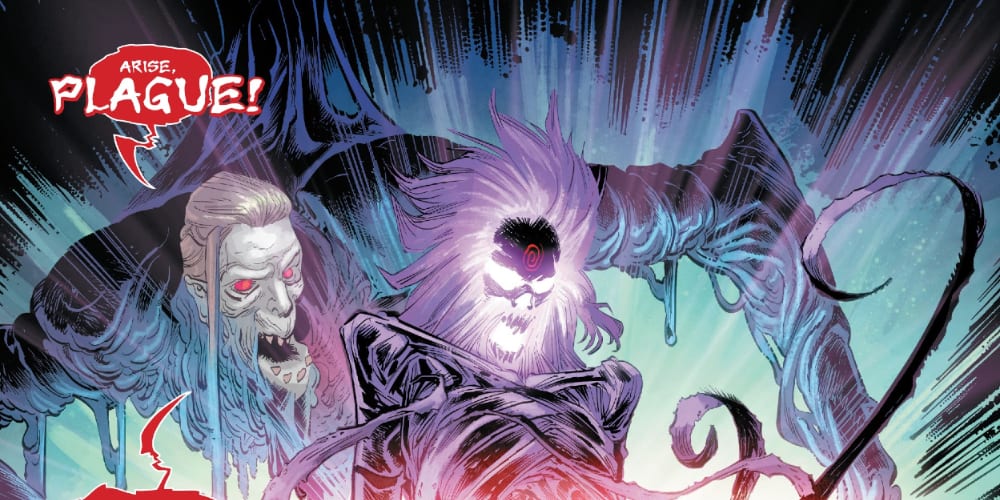 So, Run? I say run. (King in Black: Planet of the Symbiotes #1, Marvel Comics)

While Scream’s been around for a while, Plague debuted in King in Black Week Seven. And this newcomer doesn’t waste a moment. His host is the reanimated corpse of one of Cletus Kasidy’s ancestors, and the first serial killer in “the new world,” so, you know, he’s a nice guy. Within seconds, he kills four guards and nearly kills Misty Knight and Werewolf by Night. Now, since he’s a new character, in a major event, and just takes off, we’re probably going to see more of him. How? In due time, we’ll know. Regardless, Misty Knight and Werewolf probably won’t let him just vanish in thin air, even though that’s exactly what he did.

King in Black Before and After Week Seven 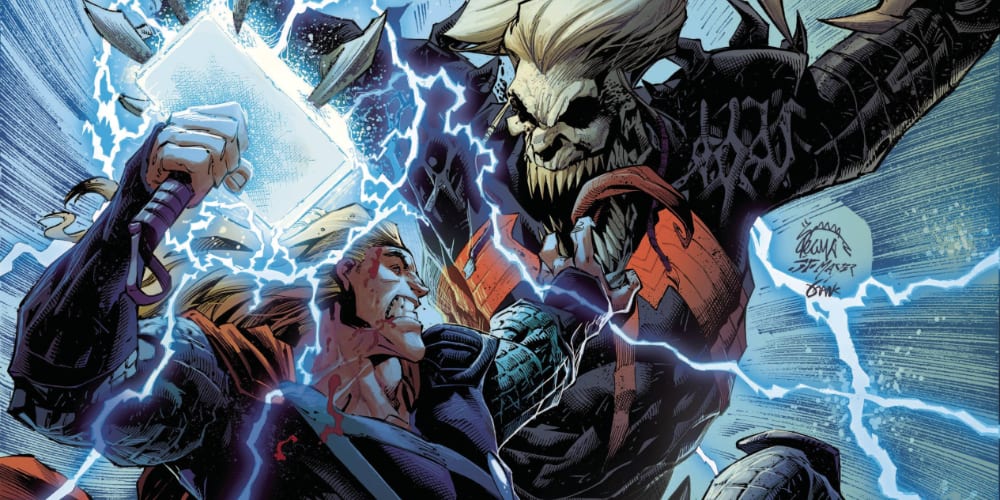 Like we said earlier, Week seven is still in the first half of King in Black. We’re also learning that there will be even more issues after the event ends too. Either that or Marvel needs to do some rescheduling. Here’s the checklist as it stands now:

King in Black Week One:

King in Black Epilogues and Otherwise 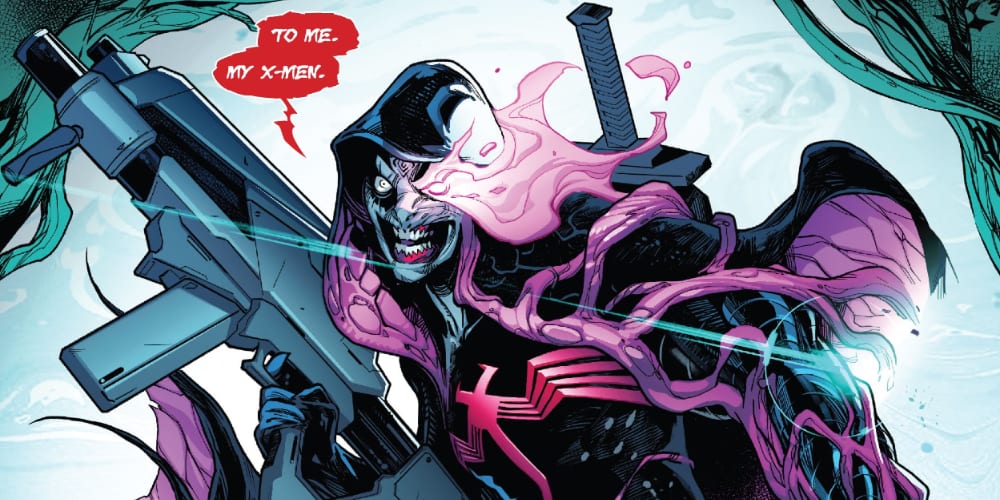