King in Black Week Nine Is Solid, and One Series Finds Redemption

Home » COMICS » King In Black Week Nine Is A Stellar Group of Tie-Ins, Including A Redemption

King In Black Week Nine Is A Stellar Group of Tie-Ins, Including A Redemption 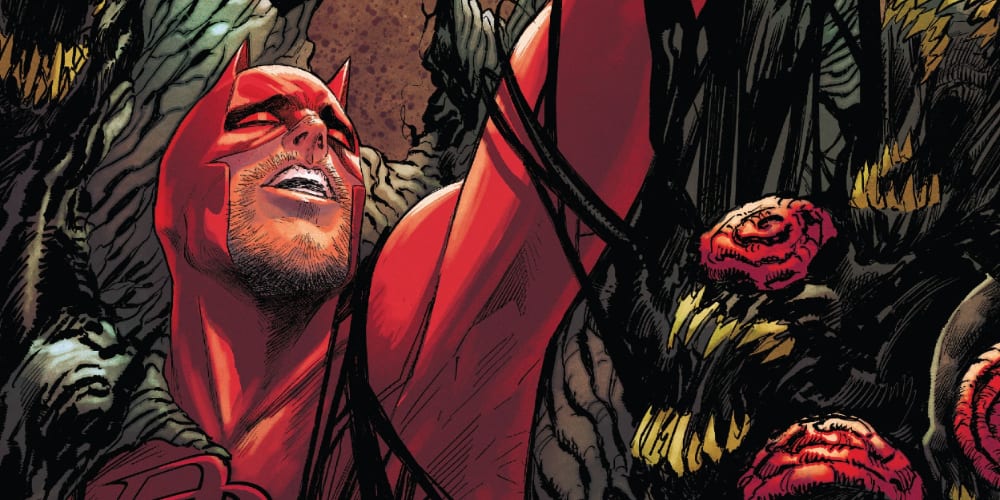 Marvel’s current big event is just steamrolling forward with what seems like a few dozen tie-ins. However, King in Black week nine shows that you can have a decent amount of tie-ins and keep it all high quality. In fact, one of the issues this week was previously one of the worst tie-ins so far—and no, it’s not The Union. Thankfully, King in Black week seven is the last time we’ll have to deal with that disaster. But let’s take a look at the other three titles first, including a double dose of Deadpool! 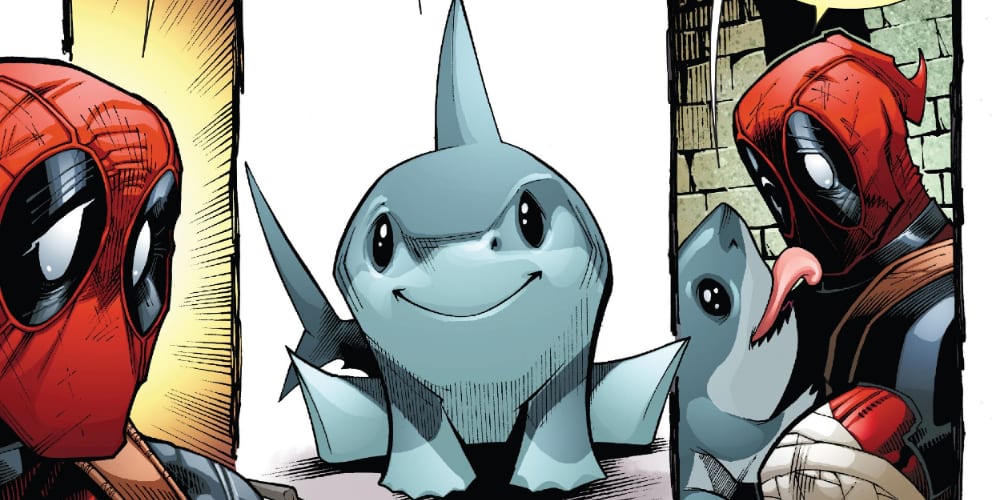 Can Jeffery the land shark get his own series now? (Image: Deadpool #10, Marvel Comics)

Undoubtedly, one of the most underrated comics of the past year is Kelly Thompson’s Deadpool. When the monster nation made Staten Island their home, Deadpool decided that he would usurp the throne and become the King of the Monsters. Unfortunately, because of scheduling issues followed by the Coronavirus delays, the series never got a chance to gain momentum. So, with Deadpool #10, Marvel canceled the title. However, Thompson incorporates the decision into the story in a really funny way. This was never supposed to be a King in Black tie-in, so at the end, Deadpool comments on how talented the writer must be that she could make it look like the story was planned this way the entire time.

Indeed, Thompson makes it seem—until we’re told otherwise—that this was all part of the plan. Why wouldn’t the series end with Deadpool and all of his monsters fighting a symbiote dragon? It’s epic enough to work as a finale while fitting the entire premise of the book. The book adds a little fun to King in Black, along with another title in week nine. When it comes to an event as dark as this one, any chance of some lighthearted fun is welcome.

Finally, Conan the Barbarian and Deadpool team up in Savage Avengers #17 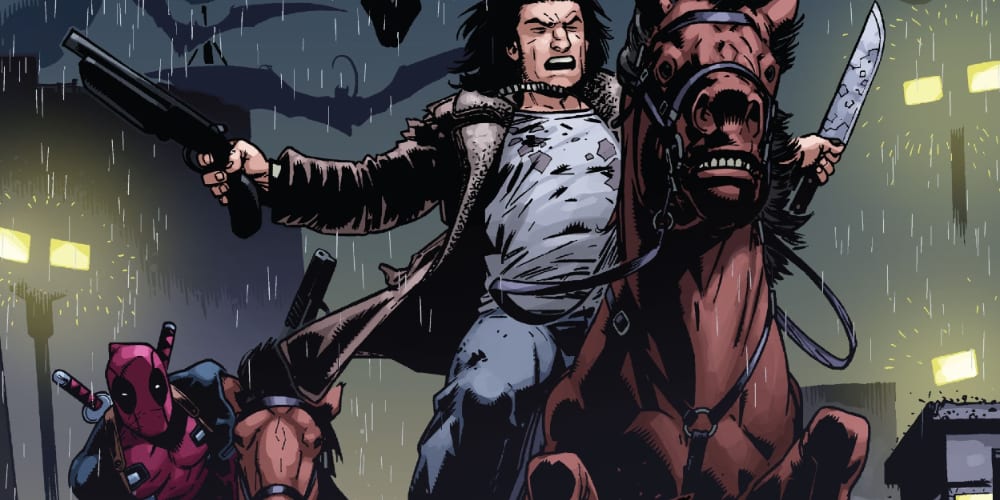 Throughout the past sixteen issues, Gerry Duggan has teamed Conan up with various heroes (and villains) of the Marvel Universe. So far, we’ve seen him fight side-by-side with Elektra, Wolverine, Punisher, Venom, Doctor Strange, Doctor Doom—and even the Juggernaut! However, there was one team-up that was destined to happen: Conan and Deadpool. At long last, we finally got that magical moment in King in Black week nine.

I’m assuming that Savage Avengers #17 takes place after Deadpool #10, since in the latter comic, Deadpool is a king, and in this issue, he’s in jail. Then again, it’s Deadpool, so it can very well be both. What Duggan does really well is tying this event back to the early issues of Savage Avengers, when Conan bonds with a part of a symbiote to heal. Also, it gave him a badass sword: 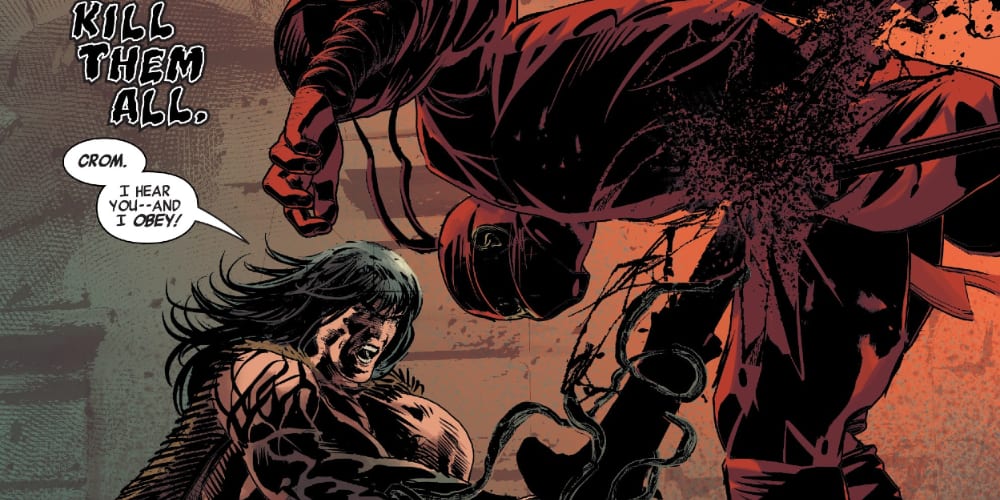 So, this makes Conan part of the symbiote codex, and Knull can tap into that. However, it isn’t Knull who speaks to Conan; it’s the symbiote that originally bonded with him! Or so we think. Before this, I didn’t expect Duggan to ever return to something so early in the series. However, King in Black gave him a good reason to, making week nine even better. 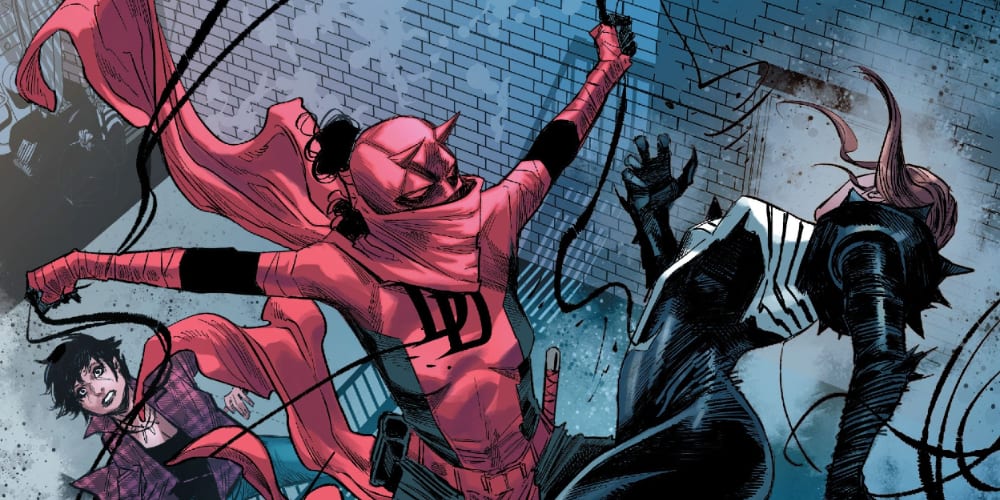 Not only does Elektra as Daredevil ook good, but she also gets to wear clothing now! (Image: Daredevil #26, Marvel Comics)

All in all, Chip Zdarksy’s Daredevil run has been one of the best in a long time (not that other runs were bad). His crime drama, broken man story, explores Matt Murdock in a whole new way.  In fact, recently, he went to jail again, yet this time he turned himself in. But before he did, he passed the Daredevil mantle to his occasional love interest, Elektra. However, the timing couldn’t be worse.

Elektra has only donned the horns for a Hall’s Kitchen second before Knull, and his dragons arrive. As a result, she goes from the standard “beat up criminals” to having to fight a horde of symbiotes in the same night. But, in prison, Daredevil can only watch as the symbiotes begin taking over the guards. Well, until they are desperate enough to let him out of his cell to help. And, um, that doesn’t end well: 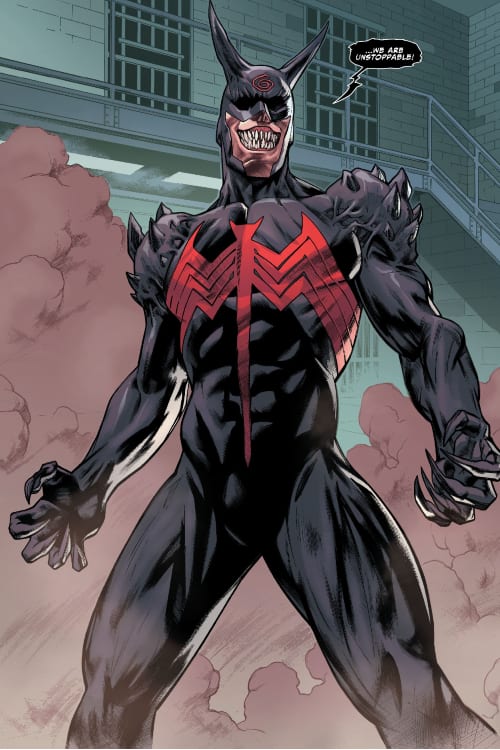 Crap. Is he about to go all Shadowland on us again? (Image: Daredevil #26, Marvel Comics)

Thankfully, you don’t need to know a lot about Zdarky’s run when entering this issue, and readers only after the event tie-ins will catch up on the status quo just fine. Kingpin is still the mayor of New York City, and now Typhoid Mary heads up his security detail. Also, things don’t go well for her either: 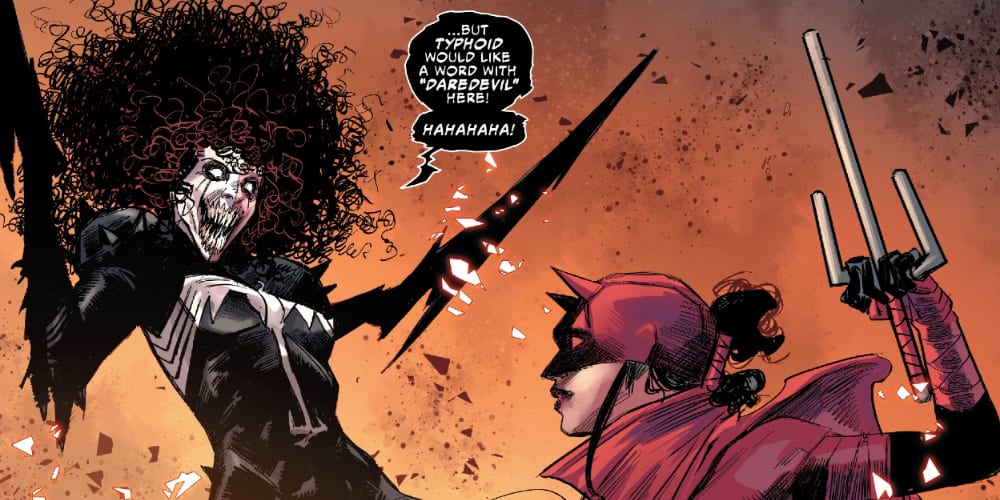 While the tie-in seems to cut into Zdarksy’s story, it also handles the event well. It will be interesting to see how he weaves King in Black into the series past week nine.

King in Black: Namor Finally Gets Better in Week Nine 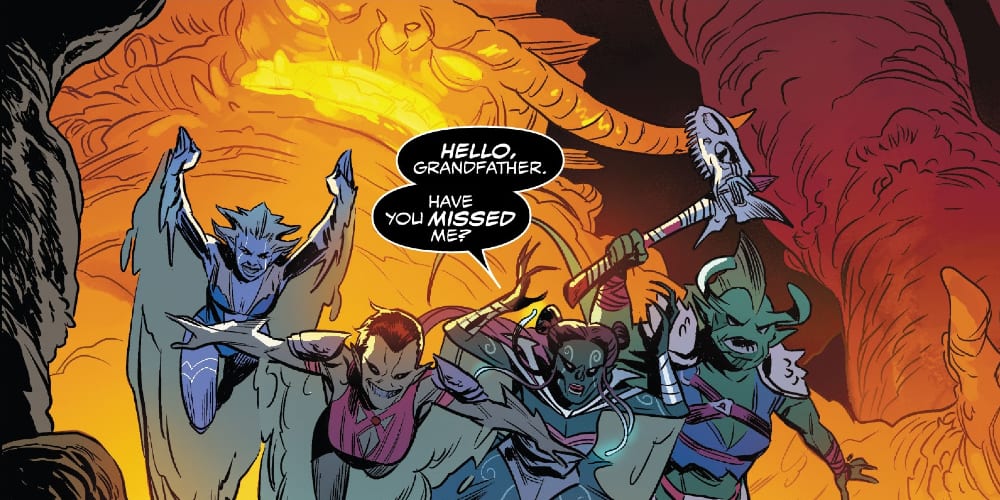 The first two issues of King in Black: Namor were both duds. They went nowhere, the art was meh, and it felt like they could have been less than one issue altogether. There’s setup, and then there’s overstaying your welcome. That’s what Namor did. However, in the King in Black week nine issue, the series becomes a lot more interesting.

So, the Swift Tide is now the Black Tide, and it looks like some form of symbiote has enhanced their powers. However, what kind of symbiote can merge someone with the earth itself? The artifact obviously has some connection to Knull. But more importantly, for now, is how utterly brutal the Black Tide is. They tear through the Atlantean forces and then destroy an entire village. But they let young Namor and his friends live. Apparently, they’ve been touched by the back stone too, but we don’t know how just yet. Regardless, it’s just great to see Busiek’s series jump up in quality.

We’re About Halfway Through This Massive Event 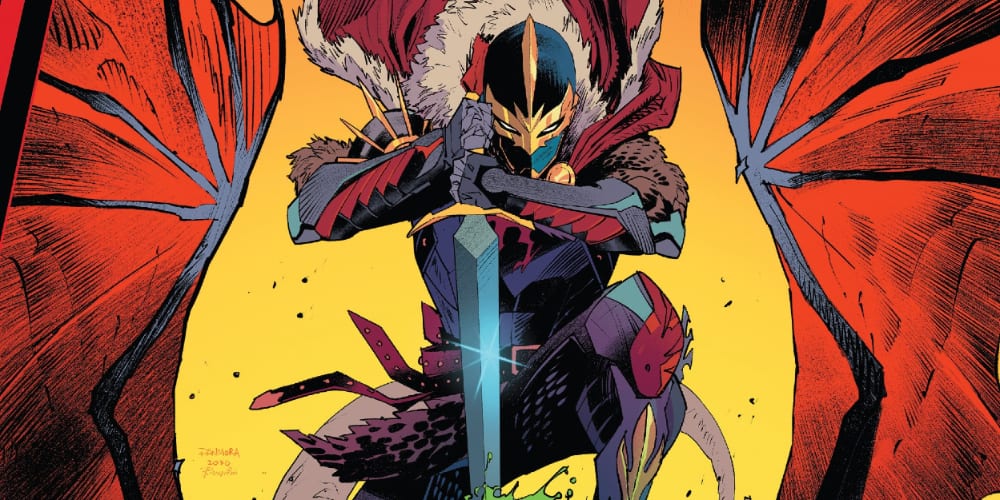 So this should be interesting. Black Knight vs Black King. (Image: King in Black: Black Knight #1, Marvel Comics)

For the most part, this week was interesting in that nothing jumped out for better or worse. It was all certainly enjoyable and enriched the event just a bit. But a lot is coming and a lot behind us. As well, some dates have changed, so the checklist below is mostly correct for now.

The Muppet Show Hits Disney+, But Does It Hold Up After 45 Years?
The First Flash, John Wesley Shipp, To Reprise Jay Garrick Role On Stargirl