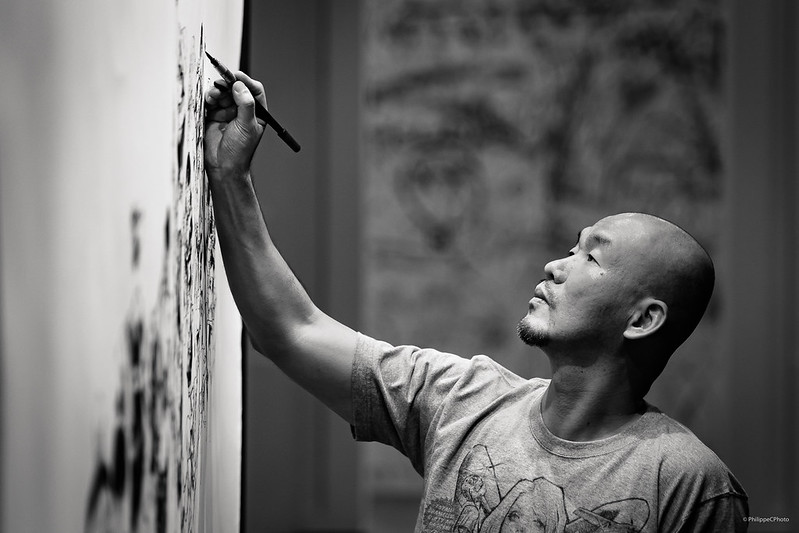 Kim Jung Gi, one of the greatest exponents and graphic designers in the world of comics, died unexpectedly on October 3rd. The Korean comic book artist, who was only 47 years old, passed away due to a heart attack. Family and friends of the beloved Kim announced his death through an official statement released on October 3 and 5.

This year, several illustrious names in the world of comics also departed from this world. Among those who stand out are Tim Sale, George Pérez, Alan Grant, Tom Palmer, and Lily Renée.

Through an official communiqué, Kim Jung Gi’s family members expressed with deep regret on October 3 and 5 the physical departure of the Korean cartoonist. In the same way, they informed fans and the community about what happened: “It is with great sadness and a heavy heart that we inform you of the sudden passing of Kim Jung Gi. After finishing his last schedule in Europe, Jung Gi went to the airport to fly to New York, where he experienced chest pains and was taken to a nearby hospital for surgery, but sadly he passed away.”

According to the statement, Kim Jung Gi died when he was going to attend the New York Comic-Con, flying from Paris, France. While waiting, he began feeling severe chest pain and was immediately sent to the hospital. Despite this, having been transferred almost immediately to the nearest hospital emergency room and undergoing surgery, he did not manage to survive.

The statement posted on the cartoonist’s official social media accounts finishes by saying, “After having done so much for us, you can now put down your brushes. Thank you, Jung Gi.” Likewise, the family made an email where fans can send drawings or thank you notes.

The world knew Kim Jung Gi for his extensive works and precision, including landscapes, environments, and amazingly complex characters. Everyone who appreciates art in its various forms will remember him. After his sudden departure, Kim Jung Gi leaves a legacy that makes him worthy of recognition as one of the best cartoonists in the world for his skill and speed in composing drawings.

The Legacy of One of the World’s Greatest Cartoonists

His skills in incorporating structures and decorative elements without needing a previous sketch marked his career. Everything showed that art was flowing from his hands.

Kim Jung Gi was originally from South Korea, born in 1975 in Goyang – Si. When he was only 19 years old, he entered the Academy of Fine Arts, producing several comic strips in his native country. The website Comics Blog, which specializes in drawings for comics, tells us that Jung Gi had the ability “to draw huge frescoes with his own hands at breakneck speed.”

Jung Gi’s specialty was live drawing, which inevitably amazed the audience. He earned a Guinness World Record for “the longest drawing by volume in the world.” Some of his most respected works are in six original sketchbooks, the first published in 2007 and the last in 2017. These contain an estimated 4,500 pages of drawings made over 12 years.

His extensive trajectory includes his time in various industries, such as music, film, and government. He significantly contributed to several popular graphic novels and comics such as Paradis, Tiger the Long Tail, Third Humanity, and SpyGames. Famous Korean hip-hop artist Drunken Tiger hired Kim Jung Gi to create his album cover. In addition, the cartoonist made meaningful collaborations with DC Comics and Marvel Comics on several occasions.

His trajectory does not stop there; he has received recognition for his videos narrating his illustrations’ creations. That makes him worthy of wide recognition by all of us who love comics and value such exemplary effort and dedication. Today we say goodbye to the master of drawing, Kim Jung Gi, who we will remember for the degree of detail that he captured, and a photographic memory that helped him develop his most important works.