Graphic novels have always given readers the opportunity to blend a love of art and reading. But with so many readable options out there, it can be tough for creators to leave the right mark, especially when it’s their debut outing. However, Swedish game and comic artist Ellinor Richey does exactly that, and we’re here to explore how in a review of the graphic novel Junkwraith. It’s a work that blends genres and spans hundreds of pages, and it’s one that you won’t want to miss.

Junkwraith is a Top Shelf Production (imprint of IDW Publishing) story from creator Ellinor Richey. Her debut graphic novel is a genre mixture of science fiction, gothic, coming-of-age, and environmentalism.

The graphic novel follows the story of Florence Sato, a teenager who begins to feel too much pressure from her family and teammates. After an important ice skating practice, Florence makes the hasty decision to trash her ice skates in frustration and failure. But the world that Florence lives in is more futuristic than our own and has strict recycling laws. Throwing away goods can turn them into terrifying junkwraiths. These creatures are revenge-seeking ghosts, going after the folks that have tossed them away- and not just because of improper recycling practices.

When Florence realizes the consequences of her decisions, she must begin a journey to defeat the junkwraith and learn more about the wastelands that surround her. Fortunately, she is not alone and brings her handy Juju, Frank, who is a more adorable and capable version of our everyday smartphones. She’ll find even more allies (and enemies) along the way, but the biggest one that she’ll need to tackle is herself. 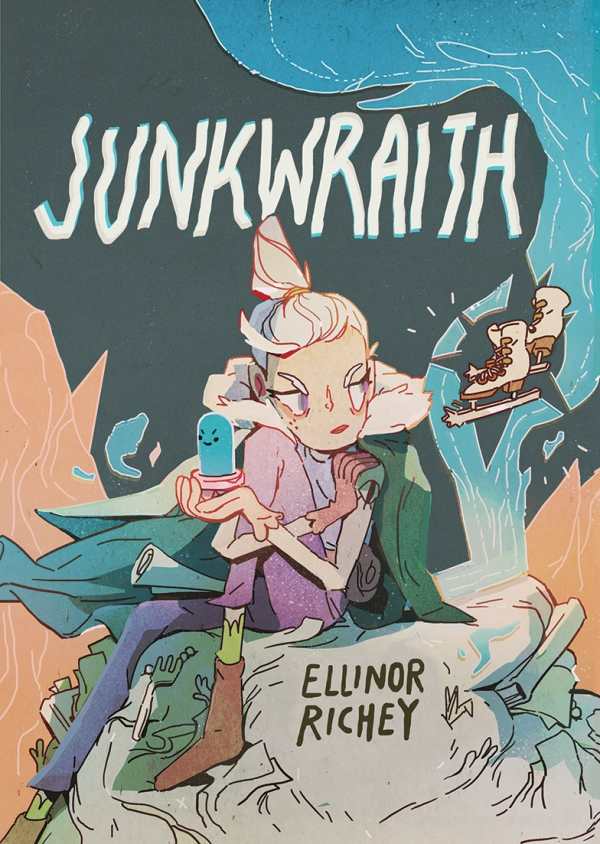 Ellinor Richey Builds A Vast World Beyond The Junkwraith

The world-building within Junkwraith takes a minute to catch up with you, but it becomes hard to contain once we leave the city walls behind. Florence quickly turns from a skater with shooting star status to a wasteland pirate, all while questioning her own potential.

Frank, the helpful Juju, is home to the most inspiring dialogue and motivation for our heroine. He is there to balance and bounce around ideas of Florence’s mission, giving her a friend to make her self-doubting confessions to. These conversations give us the overarching themes of the graphic novel, which include elements of personal development, identity building, and finding a greater purpose. These are all common within coming-of-age stories, but the unique sci-fi world that it finds itself in is what really pulls us into Florence’s world.

What surprised me in this Junkwraith review is the depth that Richey gives the Juju characters. They are not mere pieces of technology. The jujus display an incredible capacity for self-reflection and awareness, a concept that is often swept aside in other sci-fi tales.

The story of the Junkwraith graphic novel spends a little less time focusing on the main character’s relationships, instead choosing to talk about her reactions to them (and to life itself.) This is felt through the exclusion of much time with family and friends ahead of her adventures, instead highlighting unreliable narration of this part of her life.

At first glance, it might seem like leaving out some of these earlier reactions and relationship development is a misstep on the author. However, it ends up being one of the most powerful narrative choices within the graphic novel. When we’re fifteen, how rationally are we remembering the moments that matter? Spending more time with Florence’s thoughts and stubbornness gives us all of the insight that we need to understand her. She isn’t just some heroine that has been dealt some bad cards; she’s a young woman growing up in a world where she needs to learn more about her own ambition.

Beyond the well-executed character study, Junkwraith is filled with screensaver-worthy artistic elements. Pages feel like a creative hodgepodge of ideas, though some get a little overwhelmed by the harder-to-follow text and difficulty identifying characters at first glance. Despite these challenging elements, each page can tell a story on its own if you’re willing to spend a little extra time pouring over the intricate background details and delicate world-building. It’s worth switching from your smartphone to a device of higher photo quality because the icy art is what makes the graphic novel what it has set out to be.

You Can Read Junkwraith by Ellinor Richey Starting January 18th.

Ultimately, Junkwraith works wonders as an immersive and eye-catching work of science fiction. It relies on tropes that we’re familiar with, but still manages to distinguish itself amongst competitors with a memorable perspective and relatable themes.

Find out if you agree with our Junkwraith review when the Ellinor Richey graphic novel releases on January 18th, 2022. You can pre-order it here.