Unless you have blissfully been able to avoid all news for the past three years, you know what the Mueller Report is. Yet, the 400-plus-page result of a years-long investigation into foreign tampering in U.S. elections, presidential abuse of power, and obstruction of justice isn’t always the most riveting reading. So, IDW Publishing announced a new graphic novel by Shannon Wheeler and Steve Duin that will dramatize the contents of the Mueller Report for easy reading. If you can’t slog through page after page of prosecutor lingo or legalese terms, the Mueller Report graphic novel is for you. Drawing from the report itself, Duin will script the story as it happened, accompanied by Wheeler’s drawings. Interestingly, along with informing the comic-reading public about the contents of the report, the storytellers also want to make people laugh.

What Is The Mueller Report?

When it comes to investigations into presidential campaigns and abuse of power, it can be difficult to figure out what is really going on. Last time this happened, with the Watergate scandal, we were able to find the underlying cause of things because President Nixon taped almost all of his conversations. If not for this, the Watergate investigation would have been even more of an angry, politically-motivated shoutfest with no true resolution. This is the problem that befalls the Mueller Report, both because of the evidence available and how former FBI Director Robert Mueller decided to frame the results. Ultimately, he decided not to recommend charges (as is common for these sorts of investigations) because it isn’t a matter of settled Constitutional law that a sitting President even can be charged with a federal crime. Mueller instead punted that decision to Congress, who could pursue impeachment proceedings.

As for the contents of the report itself? Well, it’s a long story. That’s the problem that the Mueller Report graphic novel hopes to address. The report contains summaries of witness testimony and documentary evidence. Duin and Wheeler will take that evidence and reconstruct the scenes. So, when witnesses talk about sitting in the Oval Office with President Donald Trump, Duin will adapt that testimony to a readable script and Wheeler will draw the events as they happened. Of course, there will also be artistic license and the storytellers are also trying to make this dry, depressing subject matter not just interesting but entertaining. The Mueller Report graphic novel will be based in fact, but Wheeler’s background as a political cartoonist means it will also take a position on the issues covered. 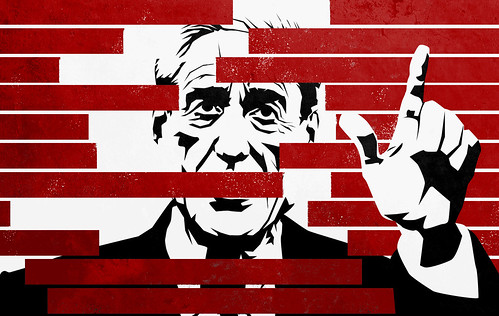 Americans are conditioned to see literally everything in politics today as a “Red Team” versus “Blue Team” fight. Gone are the days when something like foreign interference in a U.S. political campaign would be universally derided by Republicans and Democrats alike. President Trump is of especially unique character, because he openly talks about what could be described as obstructing justice or accepting foreign help during the election. Republican or Democrat, the issues raised in the Mueller Report are concerning and almost certainly not politically-motivated in the way that the president’s cheerleaders in the press would have you believe. Still, as long as President Trump is in office, this is a matter not for the courts but rather for Congress. Those in favor of impeaching the president believe that if more people were aware of the case, they’d agree.  This is one goal of projects like the Mueller Report graphic novel.

Along with the Muller Report graphic novel from IDW, there are plenty ways to find out what is inside the report. You can read it yourself for free online or pick up physical editions of the report, often annotated by reporters. There are also other projects like the Mueller Report graphic novel that hope to break down the contents of the document in a more digestible way. At 9:00 PM on Monday, June 24, 2019, a star-studded cast will live-stream a dramatic reading of the report. Mark Hamill (who will be in Star Wars: Episode IX), Zachary Quinto, Ben McKenzie (who you can catch in the Gotham Season 5 finale), Annette Benning, and others will perform from a script written by Robert Schenkkan and adapted from the original report. Just like with the Mueller Report graphic novel, the subject matter will be factual but not without some dramatic license.

There is no question that President Donald Trump is one of the most disliked chief executives in history, both by his peers in government and the public-at-large. Thus, this means the vitriol coming from the political media is even more intense than it usually is. However, be warned, that there are entire cottage media industries designed to make people on the left or the right angry at everything. It’s much easier to get “clicks” and “shares” when your audience is outraged. Thus, folks who adopt an ideological or partisan bent have a vested interest in one outcome over another. Robert Mueller, however, is not one of those people. The source material for the Mueller Report graphic novel will be objective and factual. However, the presentation of those facts might be filtered through the opinions of the storytellers. (And “opinion” is not a synonym for “bias.”)

The good thing that The Mueller Report graphic novel and stage adaptation and the eventual film will do is generate interest in the source material. Whether or not the president broke the law is a question that stains the institution of the federal government. Everyone, including the president if he’s truly “innocent,” should want to bring the truth to light. These adaptations of the report are meant to get that information to the people, so they can demand the government address these concerns accordingly. Even if the president isn’t reelected in 2020, the interference of bad-faith foreign actors into, possibly, bad-faith political campaigns is not a problem that will go away. It’s bigger than individual candidates or parties, but like everything in politics you have to get the people’s attention first.