Home » COMICS » The House of Mystery: The Strangest Home in the DC Universe

The House of Mystery: The Strangest Home in the DC Universe

The House of Mystery is located just north of Louisville, Kentucky. Right past the IHOP (you know the one). It also simultaneously exists in Sandman’s realm of the Dreaming, just past the Gates of the Horn. The House is a structure, often used as a base of operations for various superheroes, or to house patients, or to store all the worlds’ mysteries. It’s also a sentient character that can change its shape and structure at will. The House’s occupants included Martian Manhunter, John Constantine, and even Elvira for a short time. But the former home of Col. Braitwaithe truly belongs to one character, if it can belong to any at all: Cain, the murderous brother of Abel.

House of Mystery, House of History 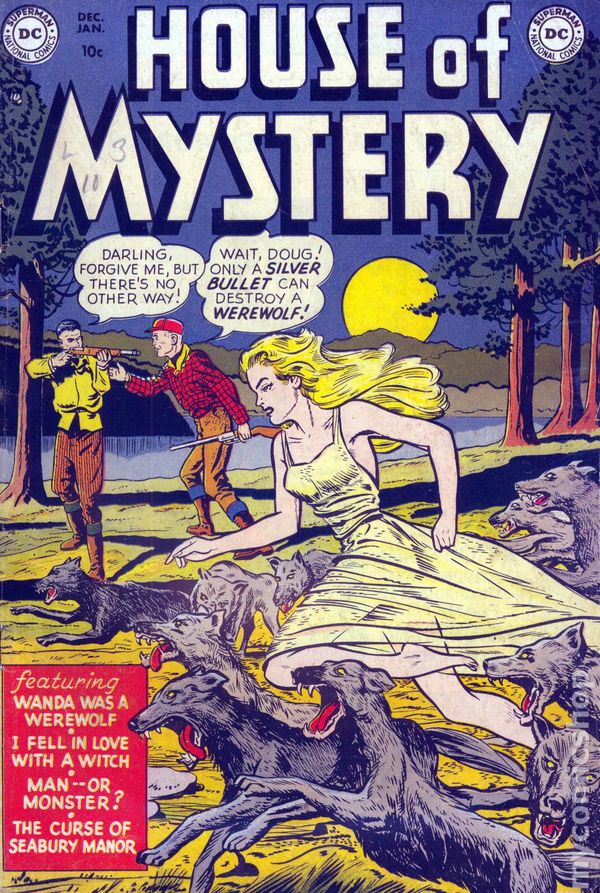 Though the House of Mystery might best be remembered as one of the location’s in Neil Gaiman’s Sandman, the publication goes all the way back to December 1951. DC Comics launched into the horror magazine before the Comics Code Authority (CCA) started becoming too aggressive. At first, the stories within included the supernatural—werewolves, ghosts, vampires, etc. But the CCA eventually prohibited any supernatural elements within comics. Now, this was an odd time. Before the CCA, most characters, such as Flash and Green Lantern, actually acquired their powers through magic. They were recreated to science-based characters to appease this new code and the changing tones in America after the atomic bomb dropped. For House of Mystery, this meant quietly phasing out their supernatural and moving towards science-fiction horror. But this was only the beginning of the vast changes the series would undergo.

How the House Became a DC Universe Character

To boost the book’s sales, House of Mystery started including superhero stories, first with Martian Manhunter, from June 1964 to December 1966. After a couple of years, J’onn J’onzz was moved to the backup stories as House of Mystery introduced one of the strangest titles in the DC Universe: Dial H for Hero. Dial H had a long run, especially for an offshoot horror comic in the time of heavy censorship from the CCA. The title ran as the main story in House of Mystery from January 1966 to April 1968. At this point, however, House of Mystery had gone away from horror completely.

House of Horror Once Again 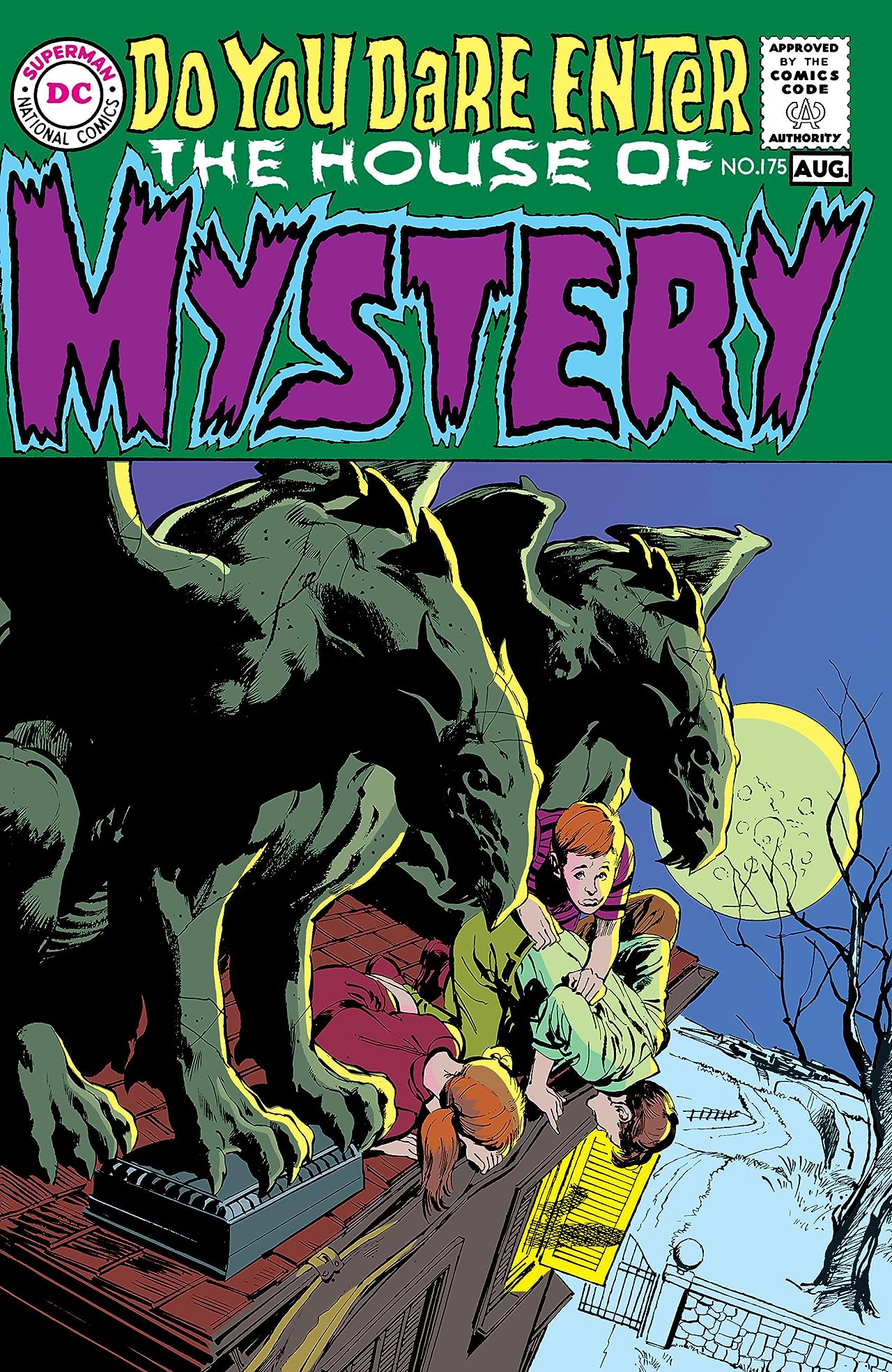 With issue #175, Joe Orlando took over editing House of Mystery, right as Marvel and DC had enough with the CCA’s draconian restrictions. Orlando brought back the horror, much to the delight of comic fans everywhere. Not only were they winning awards, but by the time they got to House of Mystery #224, they were able to print six 100-page spectaculars in a row. Orlando wouldn’t leave the title 1978, having spent an entire decade with the House. He left the series on solid footing, but it wouldn’t be until 1981 that the series would find a new voice.

Raising Cain in the House of Mystery 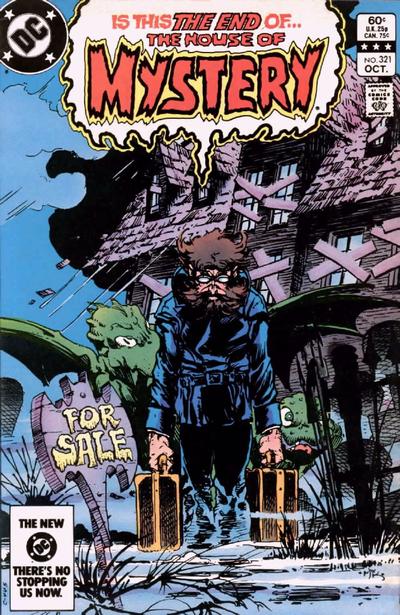 Orlando also introduced the character who would forever become a part of the House of Mystery, in at least one form or another. Cain, “the able caretaker,” debuted in House of Mystery #175, was the “host” of the comic, introducing all of the stories from his creation all the way to the end of the series in 1983. Cain even began to appear elsewhere, becoming a recurring character in Blue Devil and, of course, Sandman, while also hosting the horror humor series Plop! He may not be featured too often today, but he was a regular in the DC Universe for a while. 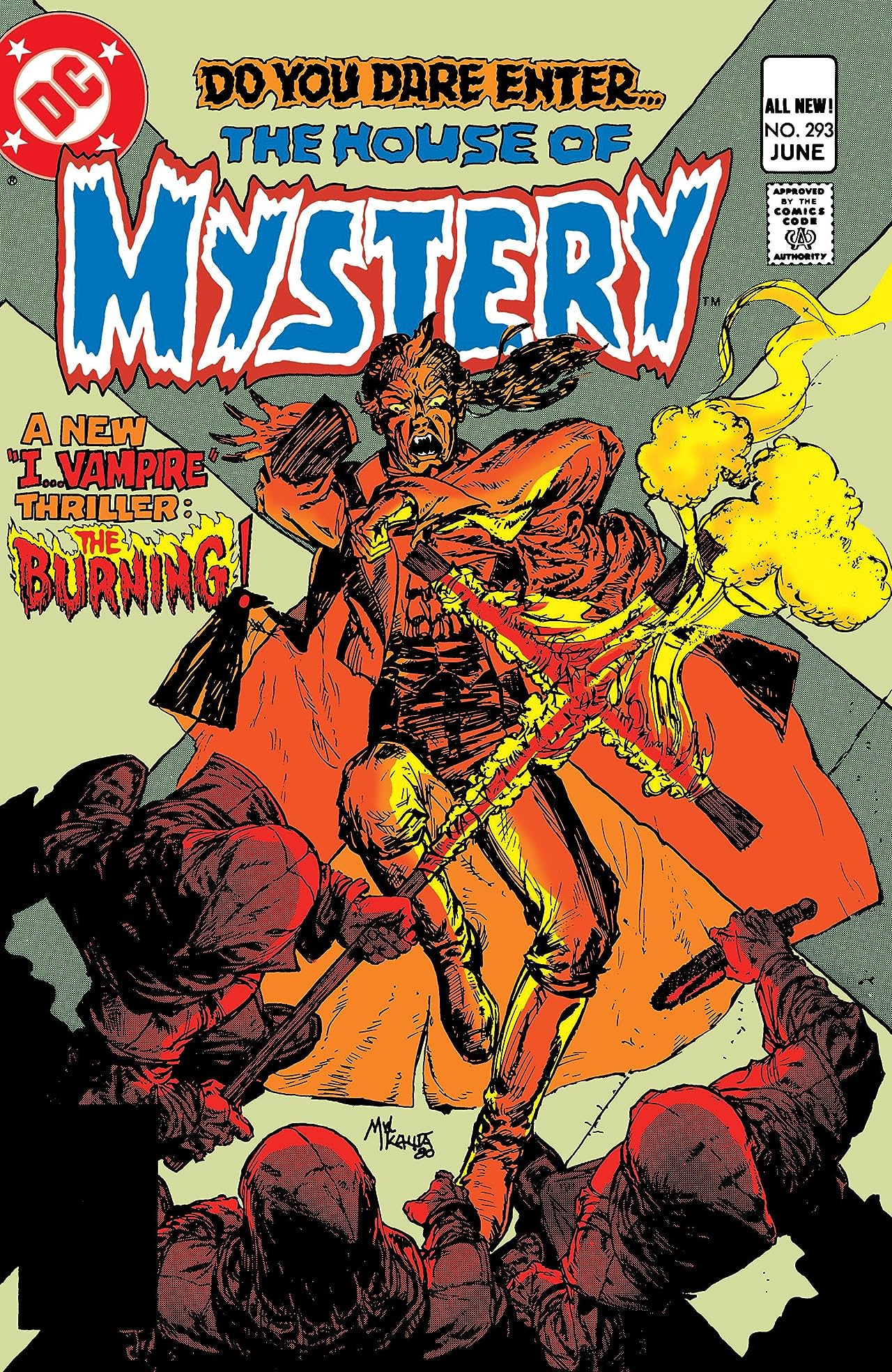 Now under the editorial guidance of Karen Berger, House of Mystery began experimenting with long-form narratives. Just two issues before she began, J.M. DeMatteis introduced another cult classic DC character: Andrew Bennett, the hero of the “I…Vampire!” stories. Bennet became the main character of House of Mystery until just before the series ended in 1983. I…Vampire is now considered one of DC Comics’ classic runs. Andrew Bennet would eventually return to his own series in The New 52, Going from “I…Vampire” to the much more streamlined and totally needed change, “I, Vampire.”

The House of Vertigo

Cain and his House of Mystery returned in multiple Vertigo titles, including Alan Moore’s Swamp Thing, where Abby Arcane, in the world of the Dreaming, must choose to enter either the House of Mystery or the House of Secrets, cared for by Abel. She chooses the House of Secrets, much to Cain’s displeasure. The two characters would pop up here and there during Swamp Thing, but they became established characters (or as established as they could be) in Neil Gaiman’s Sandman. After finally escaping nearly a century of imprisonment, Cain and Abel are amongst the first people that Morpheus, AKA Dream, visits. But Morpheus wouldn’t be the only character to visit the House in the 1980s. 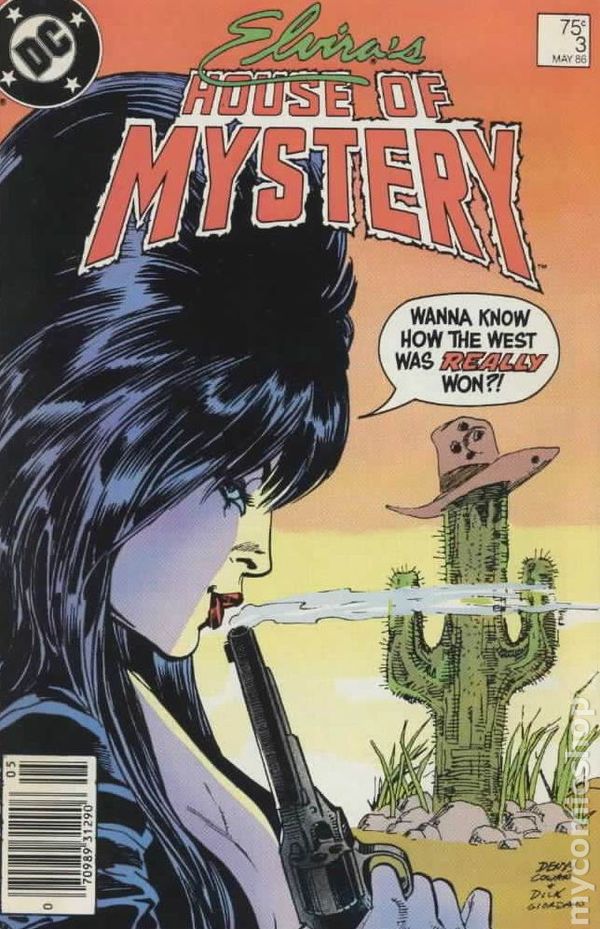 Yep, as said before, Elvira—that Elvira—took up residency in the House of Mystery. Even stranger is that Elvira’s House of Mystery was a loose tie-in to Crisis on Infinite Earth. The House of Mystery lost Cain. Not as in he died—the House didn’t know where he was and wanted Elvira to find him. She became the host of the series, which lasted for a respectable 11 issues. Also, it included one of the first comics of the CCA era to not feature their “Approved by” tag. Issue #3 didn’t have overt nudity, but enough for the CCA to consider it a  threat to the youth of the nation.

Another House of Mystery series started under the Vertigo imprint in 2008, by Bill Willingham and Lilah Sturgis. This time, the House is quite sinister, imprisoning people and making them tell stories if they want to survive. And while the inhabitants keep trying to escape, Cain keeps trying to break back in.

The House of Hellblazer 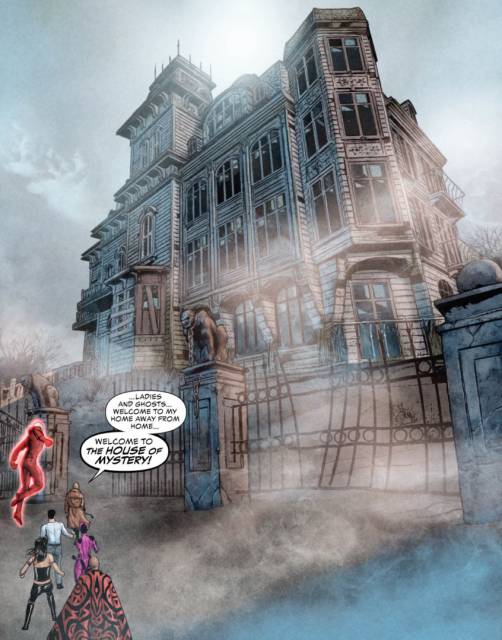 The House of Mystery started showing up in the oddest places for the oddest—or maybe most mysterious—reasons. At one point, Batman entered the House and tripped on a floorboard. Batman. Tripped on a floorboard. That actually happened (Brave and the Bold #93). And in one of the most bizarre team-ups in comic book history, Cain and Superman fought side-by-side to prevent the magician Mister Mxyzptlk from taking control of the House of Mystery.

Thankfully, the House of Mystery got a new tenant that…well, that at least made sense. In the. New 52, John Constantine, the Hellblazer, controls the House and uses it as a base for his team in Justice League Dark. The House becomes a bit of a jokester, often changing rooms and passageways on Constantine and his colleagues. It’s a sentient house—it has to pass the time somehow.

“Mystery” is the Right Word

The History of House of Mystery is pretty jumbled. One moment, it’s just a house a strange caretaker who liked to kill his brother resides in, the next it is trying to kill people, and THEN it’s tripping Batman. This kind of makes sense—the role of the House, at all times, is ambiguous, It’s there to fit the needs of a story or writer, and since it is a character that changes by nature, these seemingly odd and abrupt shifts work.

Now, if only Cain can hold onto it, maybe it will decide what kind of House it wants to be.