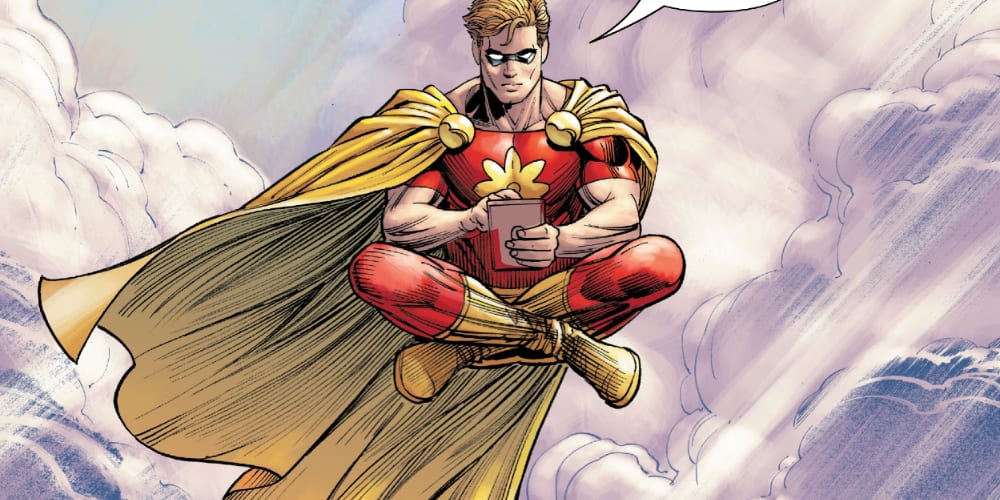 Heroes Reborn Week One felt like we were thrown into the middle of a late 80s or early 90s Marvel event. Except for Blade, Aaron wrote everyone’s dialogue in the bombastic style we used to see in comics. Alongside Blade’s contemporary style, Aaron set up the idea that his Heroes Reborn wasn’t just going to share a name with the mid-90s event, but that it would feel like we, as readers, were experiencing a warped reality too. However, it’s in Heroes Reborn Week Two that we see just how far this meta-styling goes. Plus, with just one regular issue and two tie-ins, we never feel lost in the event. So, let’s take a closer look. 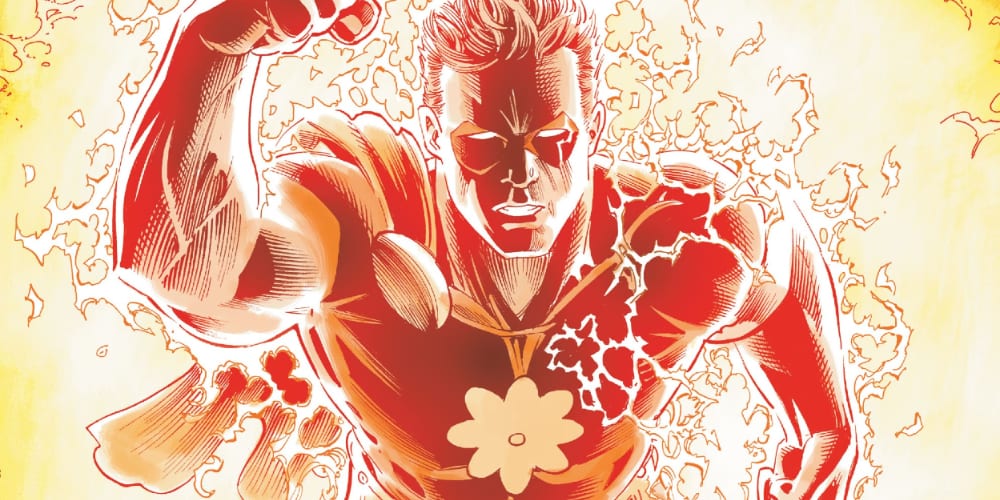 Since he can fly, does Hyperion skip leg day? I bet he skips leg day. (Image: Heroes Reborn #2, Marvel Comics)

While the event was primality billed as a Jason Aaron and Ed McGuinness collaboration, Heroes Reborn #2 throws us a new variable. The issue, though entire Jason Aaron’s writing, has two art teams. McGuinness only comes in at the end for a five-page backup story that furthers Blade’s plot. For most of the issue, we have Dale Keown and Carlos Magno. Their story focuses on Hyperion, who brings a terrifying element to Heroes Reborn Week Two: what if Superman started embracing nationalism?

Invaders From the Negative Zone 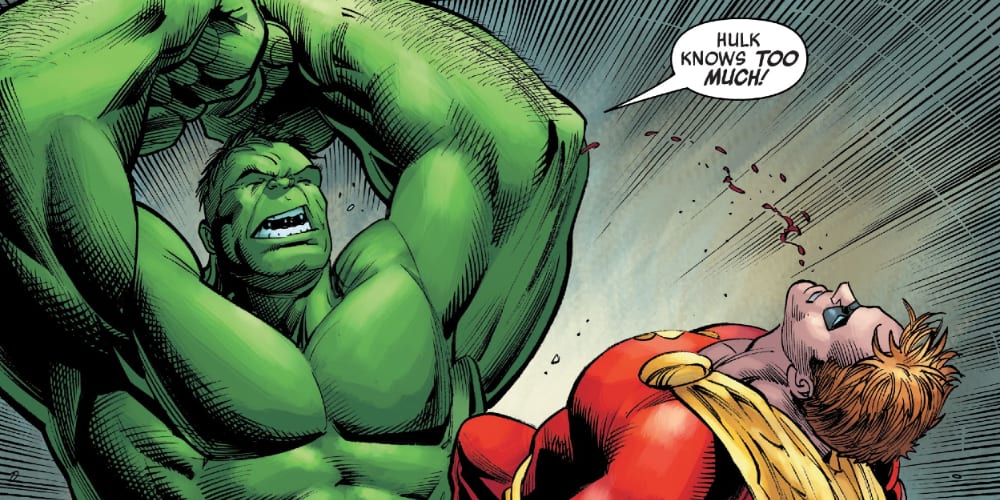 “I pray somehow, somewhere, they’re seeing this,” Hyperion narrates as he confronts Galactus. “What all the love and liberty has made of me. A man of sun-forged honesty and atomic grit…and the red-blooded American way.” During that last part, we see just how Hyperion dealt with the planet-eater. In the original tale, Reed Richards negotiated with Galactus. In  Heroes Reborn Week Two, we see Hyperion’s version of “negotiating”: 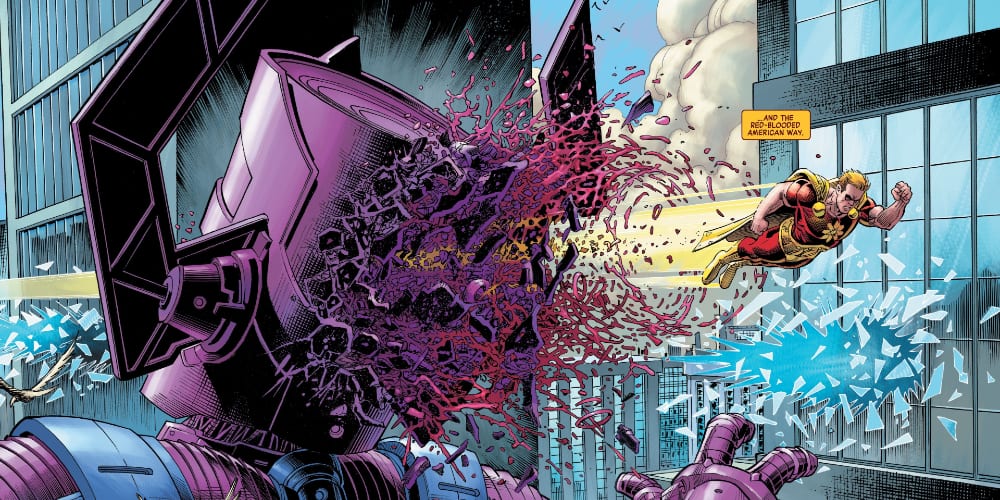 This might be the biggest sign that there is something wrong with Hyperion, but it isn’t the only one. He refers to mutants as “freaks.” When Reed Richards, a SHIELD scientist, confronts him about using the negative zone as a prison, Hyperion says he only deals in “cold, hard, American truths” and doesn’t have time for Richards’ science. He dismisses Peter Parker as a “good kid” despite being a journalist. Even the way he marks down one of his students’ essays on Captain America just doesn’t sit right: “learn to separate myth from real American history.”

However, when battling the Hulk, Hyperion – as he kills Banner – hears him whimper “Steve.” Suddenly, Margaret Carrol’s US History essay doesn’t seem like such a myth.

And one more weird thing. When Hyperion goes inside the sun to meditate, he has an American flag in a sun-proof (?) tube with him. 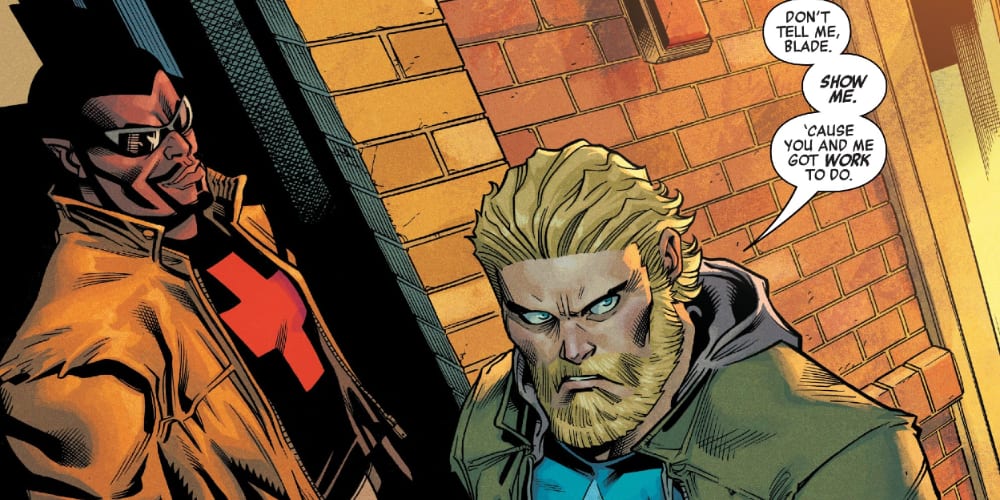 So, the main story from Heroes Reborn Week One continues as a backup story in week two. But even if it is only a few pages long, there are some exciting moments here. Firstly, we get to see Steve Rogers thawed out now. And he almost immediately knows that something is wrong with the world. Plus, when he meets Hyperion, he has some kind of effect on him. Hyperion feels weakened by the encounter, like Superman to Kryptonite. Sure, this might just be a small bit of development but Blade and Captain America teaming up at the end is just awesome to see.

Let’s get back to the structure of this series. When Marvel first announced that they were releasing Heroes Reborn weekly, most readers were skeptical of how. All we really knew was that it would be a Jason Aaron and Ed McGuinness collaboration. One artist getting a book out weekly is pretty impossible—especially one as bombastic as Ed McGuinness. But in Heroes Reborn Week Two, Marvel finally shows their method.

At the end of the issue, we get a “next time” page, with “Blur” at the bottom. Blur is the Squadron Supremes’ Flash. So, where Heroes Reborn #2 focused on Hyperion, #3 will focus on Blur. As well, we see the next rotating artist: Federico Vicentini.  Of course, we knew that other artists were involved, but most of us assumed they were drawing the backup stories. Flipping it so that McGuinness focuses on the Blade backup stories until the finale? That’s actually pretty genius. We’re going to get to see a host of great artists, all capped by one of the industry’s best. But the fact that this is making the weekly release schedule possible, that’s even better. 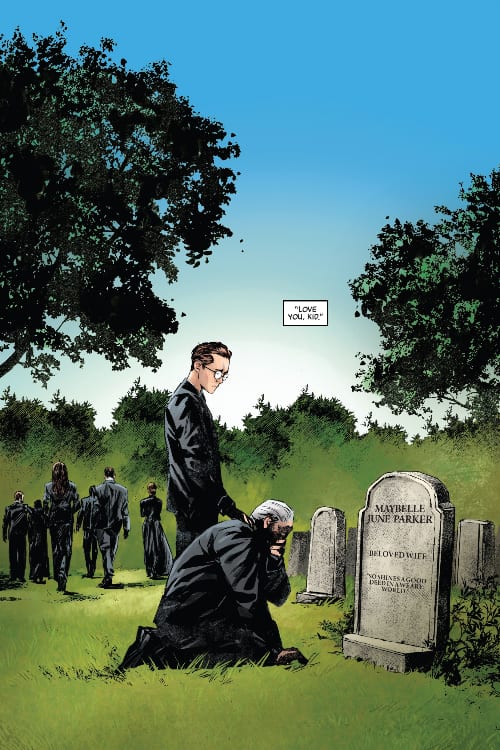 While the main series asks, “what would happen if the Avengers never came together,” Peter Parker, the Amazing Shutterbug, asks, “what if Peter Parker never became Spider-Man. The answer: his life still sucks and is filled with tragedy. He’s beaten up in high school until, literally, the very last day. He’s too insecure to talk to Mary Jane Watson. But mostly, he doesn’t have the extra push that Parker does when he is Spider-Man. And then there’s the “Parker Luck.” He meets a cute girl, Carolyn Trainer, AKA Lady Octopus is the real world, and while they’re flirting, Hyperion throws a billboard into the side of a department store. Guess who was in that store. Not Uncle Ben. In this reality, Aunt May dies.

But unlike the guilt that Parker feels when his uncle died, realizing he could have stopped it, this Parker knows there was nothing he could have done, so he slips into depression. After dropping out of college, he takes a job as a photojournalist at the Daily Bugle, specializing in superheroes. While he pretends to be “Hyperion’s best pal,” he actually loathes the hero and is patiently waiting for the chance to bring him down the only way he can: through images and words.

In Heroes Reborn #2, we see Hyperion come to Parker’s aid. The “Hive of Annihilation” escapes a bottle they were locked up in (like Kandor, but so much creepier). Hyperion kills them all and goes off to the next catastrophe. However, he doesn’t actually kill all of them. One of the Annihilation spiders survived, and wouldn’t you know it, and Parker finally gets bitten by a freaky spider.

Unfortunately, this one starts transforming him into a giant Annihilation bug. To save everyone around him from what he’s about to come, Parker hurls himself out of a window: 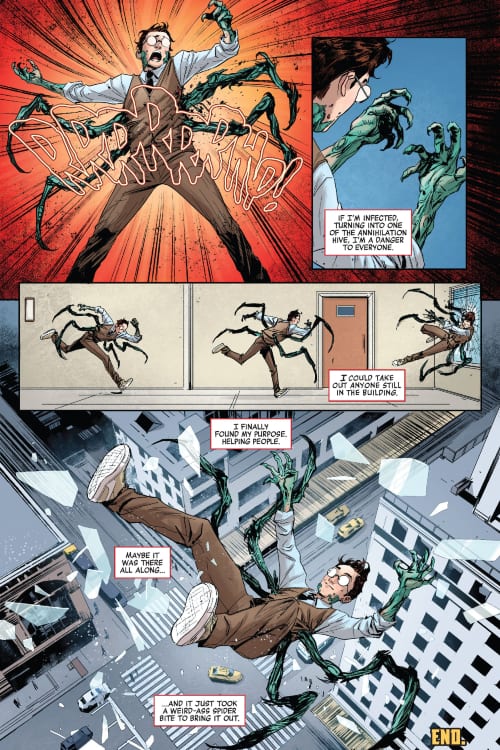 Granted, we don’t see Parker go squish on the pavement below, but there’s a definitive period after “End.” We’re only in Heroes Reborn Week Two, and already, two major players in the 616, Hulk and Spider-Man, were removed from the board. But maybe some space warriors and pirates will fair better? 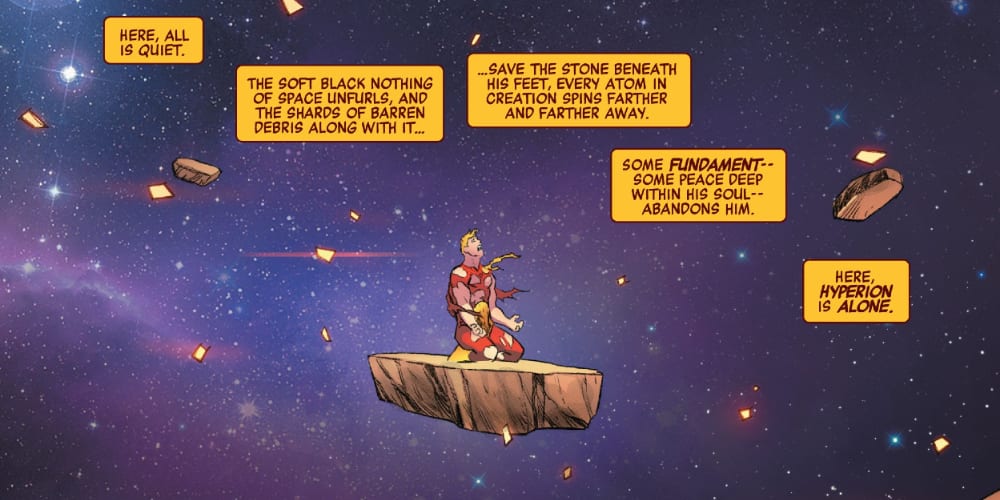 …Is it bad that I kind of like seeing Hyperion crying? (Image: Heroes Reborn: Hyperion and the Imperial Guard #1, Marvel Comics)

For Hyperion and the Imperial Guard, Ryan Cady gets super-meta. This isn’t a one-shot, but the last issue of a long-running (imaginary) series. In fact, there’s even a fan mail page at the end! This is also a comic that takes place years before the big event, when Hyperion was much younger. Gladiator and the Shi’ar Imperial Guard are training Hyperion to be a better hero. They’ve finally completed all of their missions, except for one small one. You know what happens next.

That small mission turns into complete devastation, and we see how the Imperial Guard became the Brood hosts we saw in Heroes Reborn #2. When all is lost, Gladiator tricks Hyperion into sacrificing all of his friends – and his girlfriend, Oracle. It’s one of those moments when you don’t care who the character is; you have to feel bad for them. At the same time, seeing this incident somewhat alters the way we see him in the present. Now, he’s still a dick – that doesn’t change – but now we understand why he’s a dick. His experience jaded him, or, as Cady puts it, “some fundamental peace – deep within his soul – abandons him.” So yes, we feel bad for Hyperion now…but with the one-week delayed Magneto and the Mutant Force coming up, we’re probably going to hate him again. After all, what else could “Squadron’s Mutant Massacre” mean? 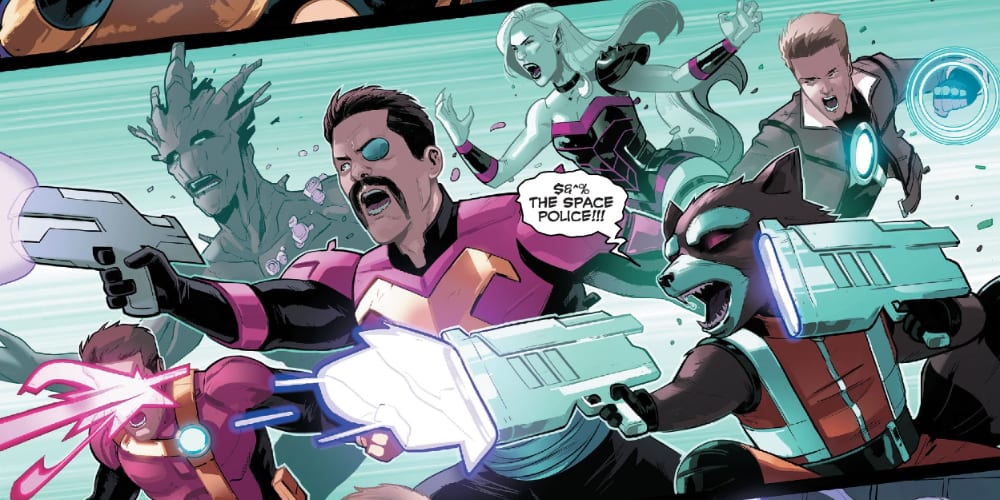 See, full meta. We get a “sneak peek” at a series that never existed. But the sad thing? This would be such a great series! In this world, Scott and Alex Summers were never separated from the parents, and Scott has complete control over his abilities. No ruby quartz glasses needed. He and Alex are part of his father’s Starjammers crew (somewhere along the way, the mother died), along with Hepzibah, Rocket, and Groot. And yes, they are all space pirates.

However, if that wasn’t good enough, there’s another addition to this “debut issue.” A member of the Nova Corps needs to work with the Starjammers to restore peace in the Shi’ar Empire: Centurion Johnathan “Johnny” Storm! If there’s any way Marvel can bring back this team after Heroes Reborn Week Two, they need to.

Next week, we’re only getting Heroes Reborn #3 since Magneto and the Mutant Force was pushed to the 26th. But now, with some one-shots under the belt, we’re getting a more established world in Heroes Reborn week two. And so far? It’s a fascinating world that I definitely want to see more of.