Heroes Reborn Week Five Is All About Nighthawk, This Reality's "Batman"

Home » COMICS » Heroes Reborn Week Five Is All About Nighthawk, Which Is Fitting, Since He’s [Not] Batman

Heroes Reborn Week Five Is All About Nighthawk, Which Is Fitting, Since He’s [Not] Batman 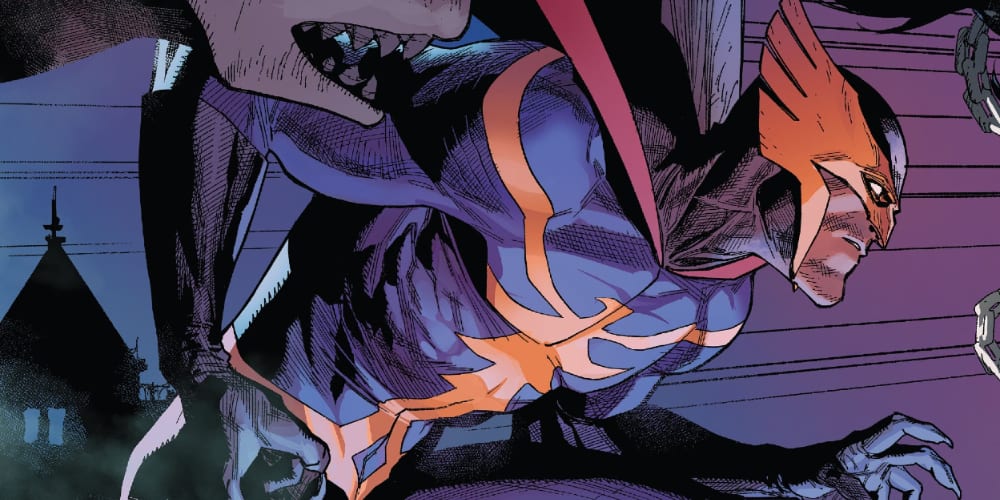 In the DC Universe, Batman is king. Not literally, of course, but in popularity and presence. Hardly a week has gone by in the past few decades where we didn’t have Batman appear in at least one comic, usually several. In fact, out of the 21 titles (single issues and trades) that came out in Heroes Reborn Week Five, Batman appears in at least eleven titles. That’s 52% Batman, which should make DC editors happy. They sure love that number. But that’s pretty normal too. For the week of June 9th, Batman or one of the characters from his franchise show up in half the titles printed. You really can’t escape the Bat. So, since the Squadron Supreme’s Nighthawk is Marvel’s facsimile of Batman, it tracks that out of the three Heroes Reborn titles in week five, he appears in (double-checking, one moment): three. Let’s dive in. 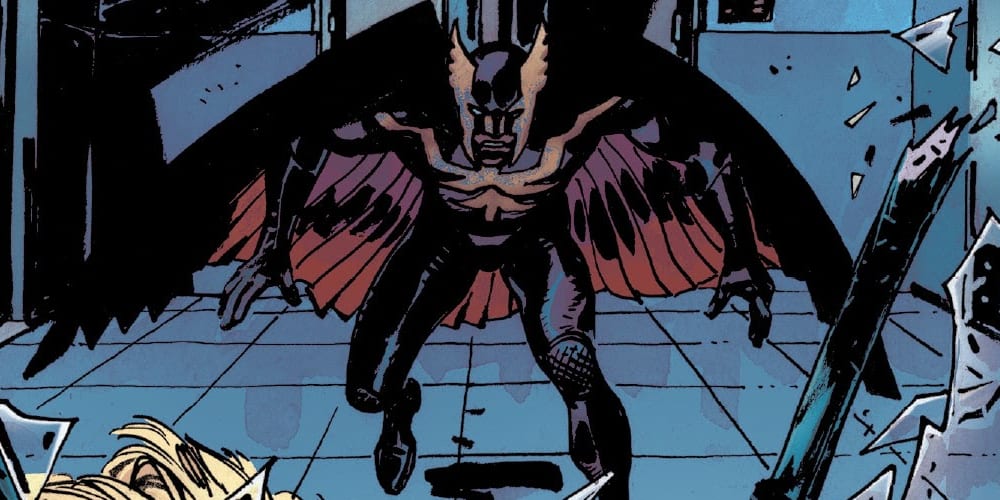 “It’s not who I am underneath, but what I do that defines me.” Yeah, that’s what we’re worried about, man. (Image: Heroes Reborn #5, Marvel Comics)

Once again, we shift to another member of the Squadron Supreme – the second to last character before the fireworks start. Jason Aaron has rolled these characters out in a very meticulous way. Hyperion, the Superman of the team, had to come first because Superman came first. And we saw a little bit of how evil these superheroes are. He softened the team up in Heroes Reborn week three, showing Blur as the most innocent of the group (or most naïve). But in week four, we really saw how malicious they are – not simply evil. Not every villain wants to maim and kill to their heart’s content. Joker? Sure. However, Doctor Prism doesn’t do this to infuriate a single adversary. He does it for his own amusement. So now we’re in Heroes Reborn week five, and we get the fake Batman of the group.

But how twisted is this Batman made in Mephisto’s image? Can’t be that bad, right?

The Pageant of the Masters of Nocturnal Artistry 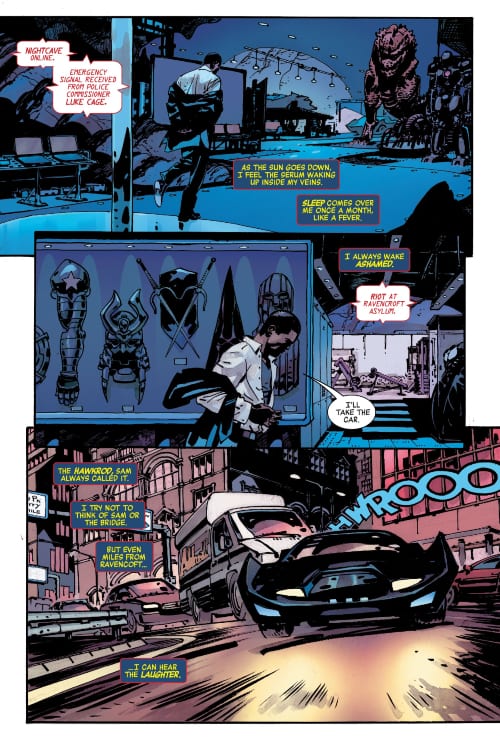 If the image above doesn’t scream “I’m Batman,” then you obviously need to read more Batman comics. But here’s the thing…Nighthawk is a better Batman. He’s also a better Moon Knight. And for some reason, Spider-Man (more on that later). Bruce Wayne has one rule: don’t kill anyone. Kyle Richmond doesn’t just abide by his own rule; he pushes legislation to ensure that his colleagues don’t kill either. Bruce Wayne spends his days pretending to be a billionaire playboy philanthropist (not a genius). He’s one of Gotham’s beloved sons, always trying to better his city, sure, but he doesn’t really get much done as Bruce Wayne. So, who is Kyle Richmond when he isn’t Nighthawk? As we see in Heroes Reborn week five, he’s more dedicated to that code than Batman ever was. 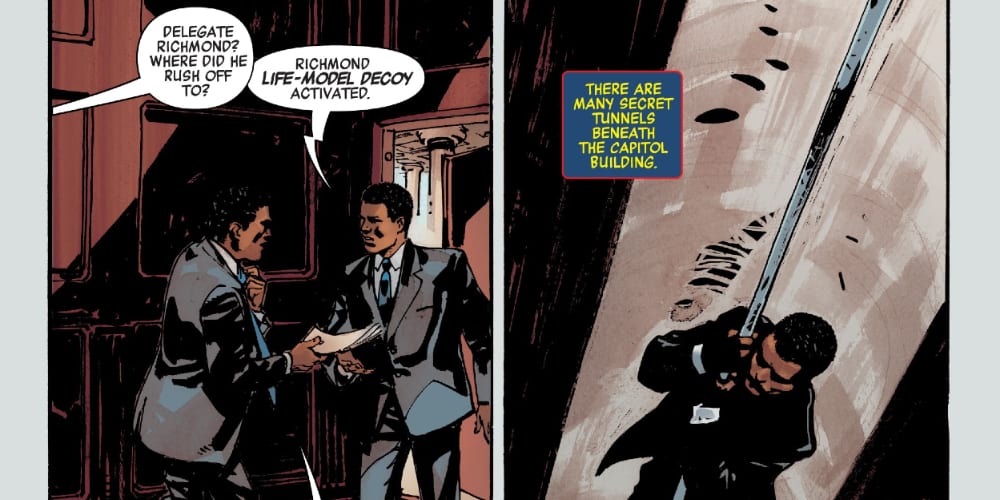 Oh, you built a secret tunnel under Wayne Tower, which you own? I built mine in the Capitol building – and no one even noticed. (Image: Heroes Reborn #5, Marvel Comics)

Despite also being a millionaire, Richmond chose to run for public office, winning the congressional seat…for Washington DC. Since DC is absurdly not a state, their representatives can introduce and back legislation. But that most important part of being a US Representative? Voting? Nope. Washington DC has a population of almost 700,000. That’s more than both Vermont (approximately 650K) and Wyoming (approximately 575K), but they have no voice. Even more insulting? They don’t even have. They couldn’t even vote for the President – who lives there – until 1961. But does this stop Representative Richmond from having a powerful voice in the House? Nope. And what bill does he introduce? In this comic, a mental health bill. But there’s something much bigger in one of the Heroes Reborn week five tie-ins.

He’s a badass congressman. But what about as a superhero? 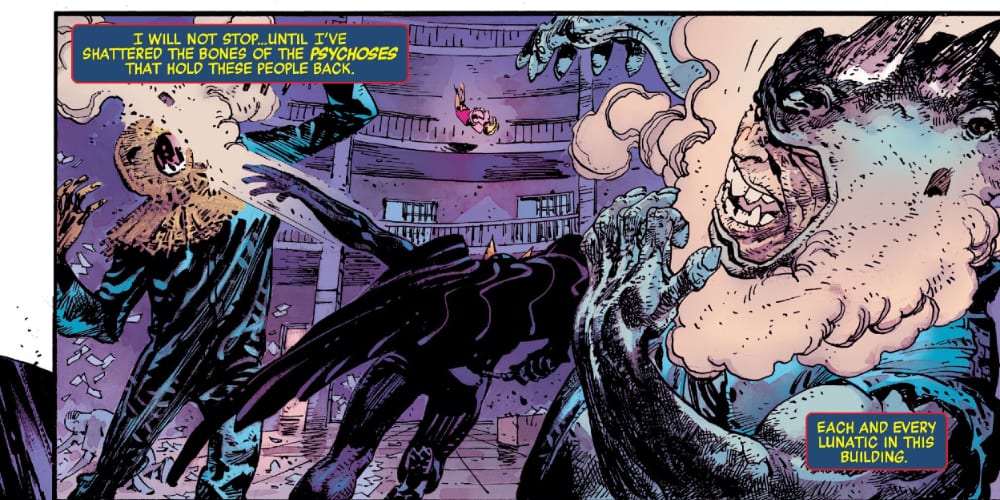 Woah, dude, psychoses doesn’t have bones. But Rhino? He does. Or at least, he did. (Image: Heroes Reborn #5, Marvel Comics)

Batman likes to break people. Not just emotionally, though. He literally likes to break people. We never see what happens to the henchmen he beats the crap out of on the way to the boss, but there’s multiple casts, stitches, surgeries, and a few defibrillators (you don’t really believe that none of them have died from their injuries, do you?). When Nighthawk charges into Ravencroft Asylum in Heroes Reborn week five, he leaves an actual trail of unconscious bodies. Even at the beginning of the issue #5, he beats the crap out of Kraven the Hunter and ties him up, leaving him hanging upside down for Commissioner Luke Cage to find. Oh, yeah. Commissioner Cage – more on that in the next article.

There’s just one key difference between Nighthawk’s violence and Batman’s. Nighthawk is not just aware that he enjoys the violence. He calls it his therapy. This isn’t just fun for him; it’s a delight. But that goes with most of what we’ve seen from the Squadron Supreme so far. Again, only Blur seems at all ethical. It’s Mephisto’s team – how else should they be?

Heroes Reborn Week Five Introduces the Joker of Mephisto’s Reality – and No, It Isn’t Deadpool 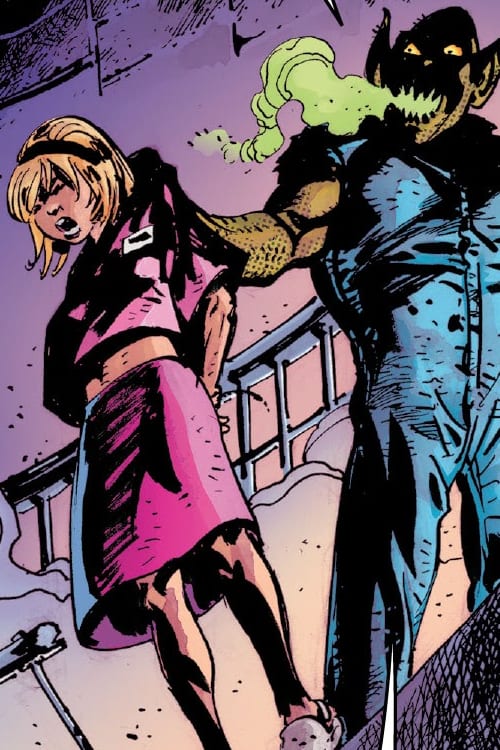 Deadpool will have to settle for Harley Quinn. Actually, he would love that. (Image: Heroes Reborn #5, Marvel Comics)

You would think that Deadpool would be the Joker of Mephisto’s world. It certainly looked that way in week four. But Jason Aaron reveals the true Joker counterpart in Heroes Reborn week five: Norman Osborne, “The Goblin.” And he is every bit as terrifying as Joker is at his worst. However, in this case, you can double up on the tragedy he dishes to Nighthawk.

Since Nighthawk is both Batman and Spider-Man (and Moon Knight) in this reality, the Goblin is both the Joker and the Green Goblin. We see in a flashback that the Goblin kills Sam Wilson on the Chesapeake Bay Bridge in DC. In a tie-in, we’ll get a lot more of that. Yet, we already have the parallels and imagery to another bridge death scene: Spider-Man and Gwen Stacy. But we’ll dive into the Mephisto-altered “Day Gwen Stacy Died” later. Back to the Goblin himself.

Just as Joker loves to do, the Goblin somehow frees all the “patients” in Ravencroft Asylum. All he wants is to get Nighthawk to the insanity ward, where he’s holding Doctor Gwen Stacy by the neck over a very large drop. We’ll see more of Gwen in week six, but from the glimpses and mentions in issue #5, it’s clear that she is part Nightwing and part Harleen Quinzel.

The Goblin infects her with his own toxin, driving her mad. Guess she’s Harley Quinn now (don’t tell Deadpool). When Nighthawk finally ends things, the Goblin, just like the Joker in The Dark Knight Returns, attempts to kill himself in a horrific fashion. Nighthawk stops him long enough for him to say these last words: 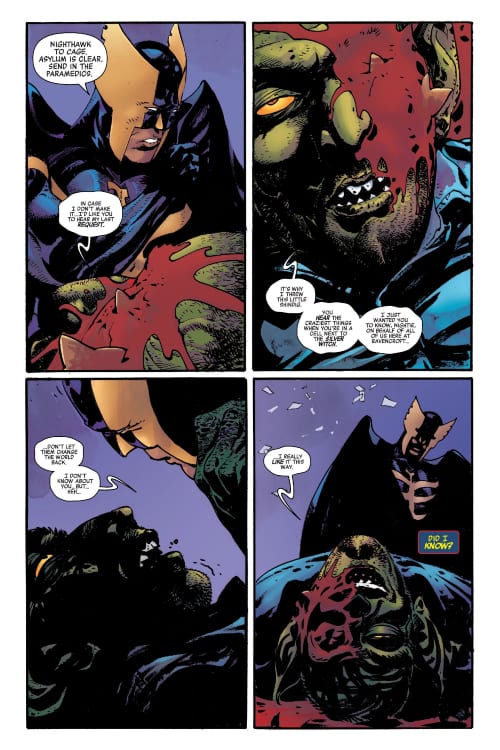 Does Nighthawk Know That Mephisto altered the World? 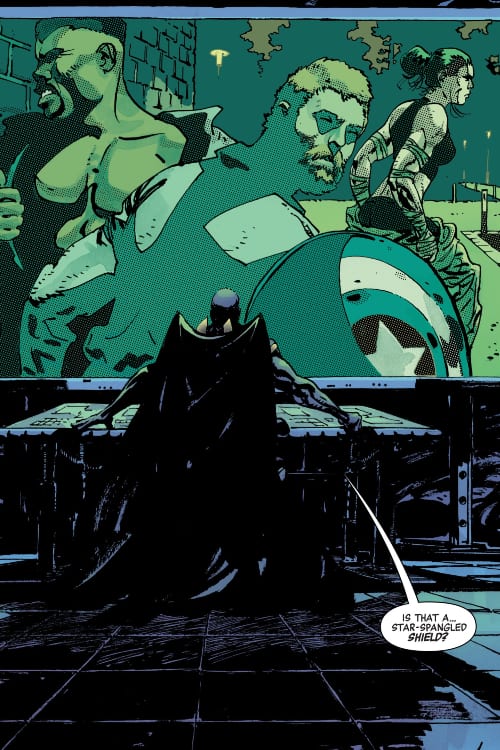 The more apt question is, “does he care?” The answer? Nope. As he reflects on the Goblin’s words, we get another moment where Aaron teases some moral core in Nighthawk, only to rip it away. “As far as I’m concerned, all that matters is what we do with the world. And I do more on a daily basis than any man alive,” Nighthawk narrates. So far, just typical Batman inspiration. But let’s keep going. He continues, “Is the world the way it’s meant to be? Is anything ever? I just know, with every fiber of my being, that I’m where I belong.” Conviction is good. A little much, maybe, but not an “oh crap” moment. That comes next, as he concludes, “And I wouldn’t want to be the man to tell me otherwise.”

In Heroes Reborn week one, Blade tried to reason with Nighthawk, attempting to get him to see that someone or something altered the world. It’s apparent even then that Nighthawk already knows this. Hell, he might even know that Mephisto is behind it all. Now we know that he will fight for this reality, even if the devil created it.

If you ever wondered what it would look like if Batman sided with Darkseid, here you go. He’d rather keep a reality that doesn’t exist over doing the right thing and setting things back the way they were.

We didn’t forget about the Heroes Reborn week five tie-ins. They’re getting their own special article soon!

Pop Culture
Mark Hamill Sells Star Wars Memorabilia To Help Ukraine
Pop Culture
Ant-Man Is A Writer? Scott Lang’s Book Is Now On Amazon
Pop Culture
Hollywood Will Once Again Have Presence At The Super Bowl LVII
Pop Culture
The 10 Best Anime Like Evangelion
Pop Culture
Why Neon Genesis Evangelion Is Popular: 10 Reasons Its Loved by Millions
Marvel
Who Is Nebula?, The Sadistic Ally Of The Guardians Of The Galaxy