The Star Of Heroes Reborn Week Eight Is Ed McGuinness 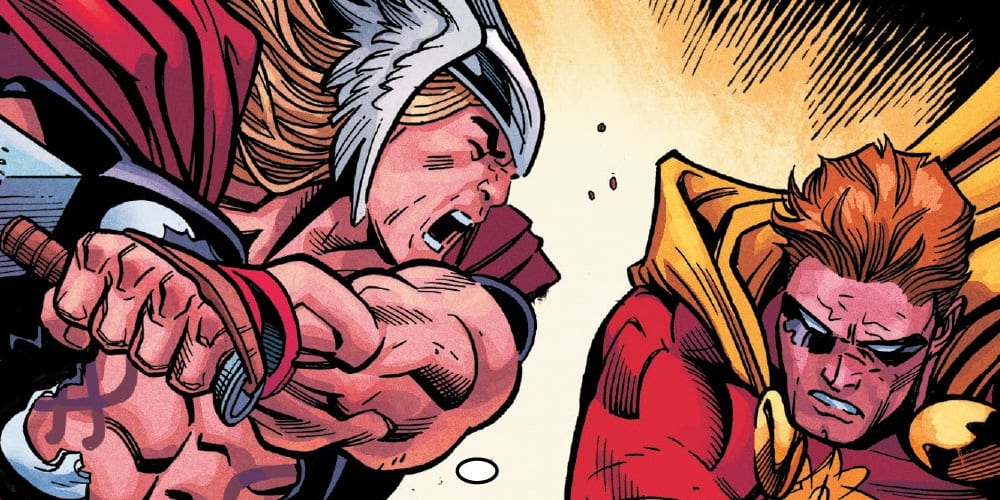 Heroes Reborn has been a strange event. Firstly, it had nothing to do with the original event, really, and the title doesn’t actually work for the story. Heroes Replaced or Heroes Rewritten would have been closer to the plot. Secondly, the structure of the main series, a string of character one-shots, was wonderfully different from the standard structure. However, none of the careful character development paid off in the end. That’s because Heroes Return #1, the only issue of Heroes Reborn week eight, feels far too rushed and underdeveloped. It also doesn’t escape the trappings of the “this is a trailer for the next event” problem so many events have. Though, to be fair, the ending is wild. 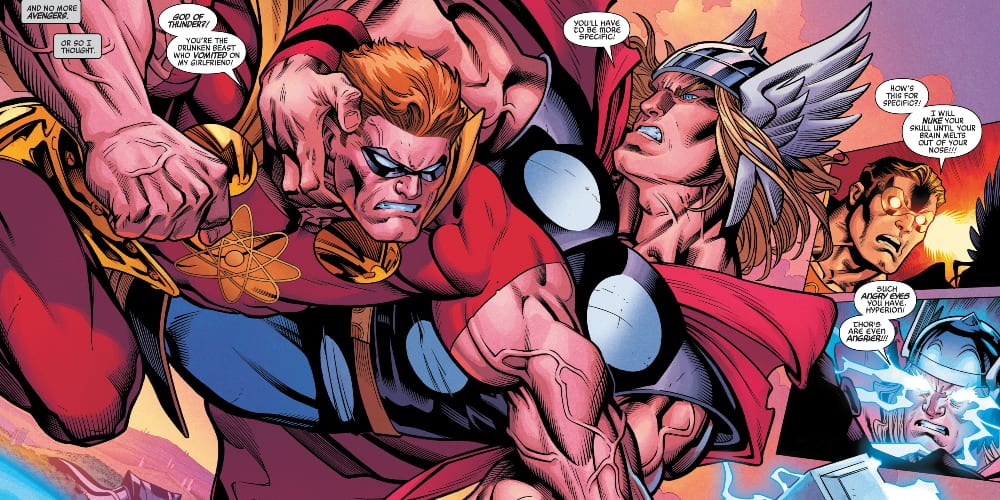 They’re punching each other WITH THEIR EYES! (Image: Heroes Return #1, Marvel Comics)

The Man Who Rebooted the World

At the end of Heroes Reborn week seven, the Squadron Supreme and the Avengers were about to beat the crap out of each other. In Heroes Reborn week eight, they beat the reality out of each other. Or, more specifically, the Avengers beat the Mephisto out of the Squadron. Sure, the Squadron gets a few hits in here and there. They especially hate Blade since he kind of unraveled their entire world. But there are just punches galore in this issue. However, while we get some great action moments for characters, we don’t get much plot. And we get minute character development. In fact, there were storylines that it felt Jason Aaron was building that just never came to fruition. Most of all, the fact that Blur seemed to be breaking away from the Squadron, ready to switch super teams.

Instead, he just fights Black Panther until T’Challa incapacitates him Achilles style. On the flip side, the utter brutality we’ve seen from Power Princess, Doctor Spectrum, and Hyperion feels downplayed. Aaron spent so much time building up their abilities that it feels like the Avengers defeated them far too easily. Doctor Spectrum flew a Starbrand-empowered Rocket Raccoon into a sun and beat him into it. Baby Starbrand (but don’t call her that to her face!) takes him down with little to no effort at all. Apparently, no one ever thought to destroy the prism before. Although it did lead to one of the best moments of the entire event: 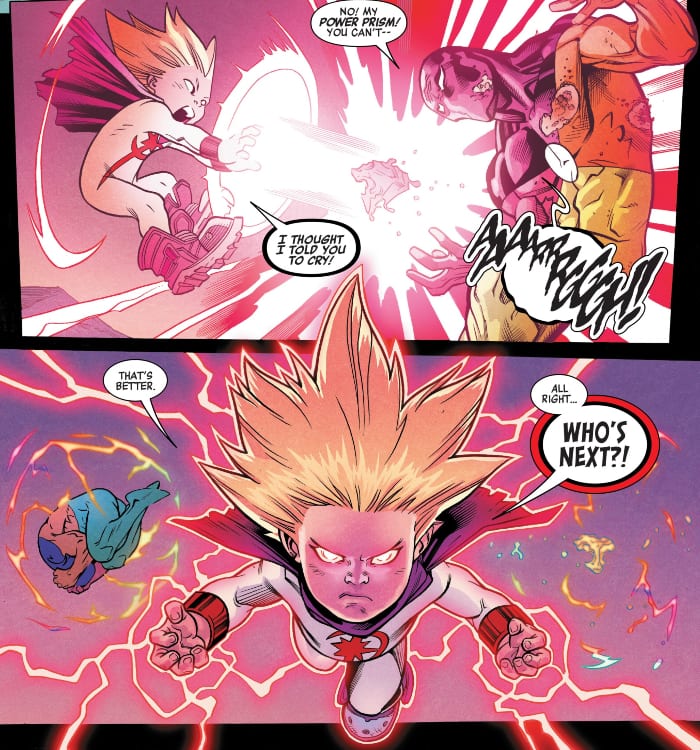 Can I adopt her? (Image: Heroes Return #1, Marvel Comics)

Do The Avengers Have To Sacrifice – Or Even Struggle – To Turn Things Around?

A series of awesome moments, however, does not make a solid story. Within moments, Phoenix and Starbrand nearly destroy the Pandemonium Cube and resets the reality. But, of course, the only person who remembers is Blade. Also, where we find the squadron afterward doesn’t make much sense. Blur, Doctor Prism, and Power Princess are locked in a SHIELD prison for the super community. Yet Hyperion is just flying around, moping:

If anyone can lead Hyperion on a redemption arc, it’s Spider-Man. (Image: Heroes Return #1, Marvel Comics)

And Nighthawk is in Washington DC again, already plotting to bring back the false reality that he loved: 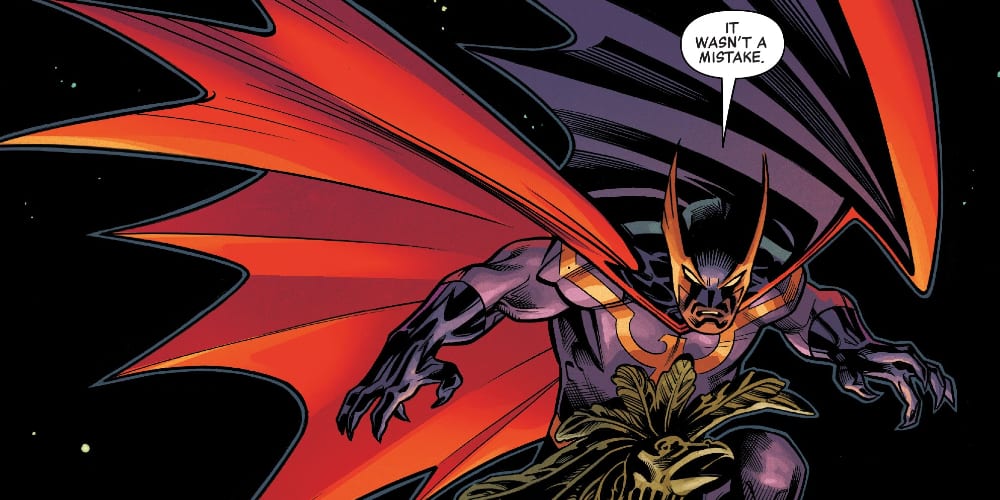 In what world is a deranged, power-hungry, unhinged xenophobic president not a mistake? Asking for a reality. (Image: Heroes Return #1, Marvel Comics)

And they all remember what happened. Yet, since no one else does, they just seem like superheroes gone crazy. Even weirder, they have no belly buttons or fingerprints, or records. Apparently, when Mephisto created the Squadron, he forgot that humans have navels. But the most frustrating thing about the Squadron in Heroes Reborn week eight is that it feels like they didn’t matter to the event at all. And if Coulson’s plan was to replace the Avengers with his own team, he really sucked at his job. He had an all-powerful evil cube that could reshape reality…but he kept the Avengers alive? Didn’t use the cube on Blade when he found out he was still alive? Mephisto must be pissed off…and he is. We’ll get back to that.

The Star of Heroes Reborn Week Eight is Ed McGuinness 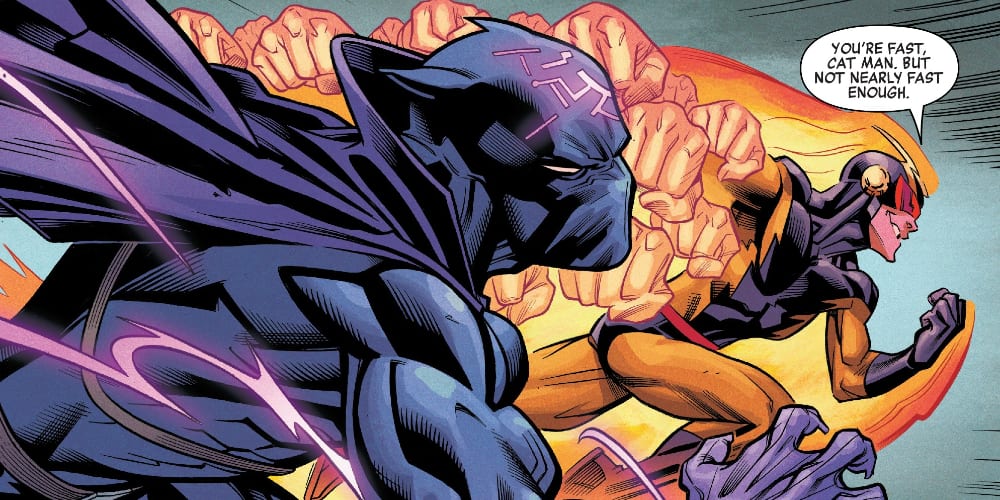 A baker’s dozen of punches for the price of one! (Image: Heroes Return #1, Marvel Comics)

Since the final chapter is mostly just one big battle, it’s important that the fight scenes look amazing – and thanks to Ed McGuinness, Mark Morales, and Matthew Wilson, they do. It’s always great to see how much fun the artist is having on a title, and that shines through on every page. You can also see which characters McGuinness likes penciling the most: Starbrand and Phoenix. The way he draws Echo, the new Phoenix, truly invokes the idea of beauty and destruction. And Starbrand? That five-year-old girl steals the show. To that end, either by chance or because Aaron saw how much he loved the characters, the two team up to, as said before, reset the reality, but they also take down Power Princess together. And the way McGuinness, Morales, and Wilson deliver this moment is pure chaotic beauty: 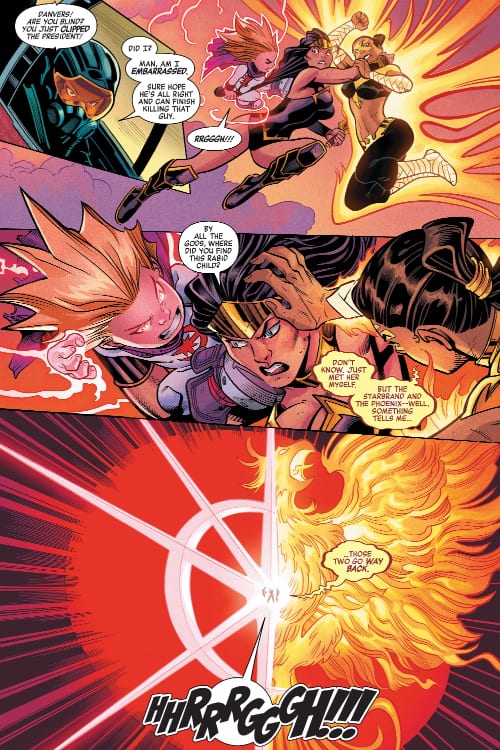 I think I found my next tattoo. (Image: Heroes Return #1, Marvel Comics)

If tomorrow, Marvel announced that Jason Aaron and Ed McGuiness were teaming up again for a series, mini or ongoing, of Phoenix and Baby Starbrand going around the cosmos kicking ass, I’d preorder it immediately. Imagine Echo, with the power of the Phoenix, trying to raise a little girl with the power of the Starbrand. What would the temper tantrums even look like?

What Was This Event All For, Anyway? Meet Mephisto and the Red Council… 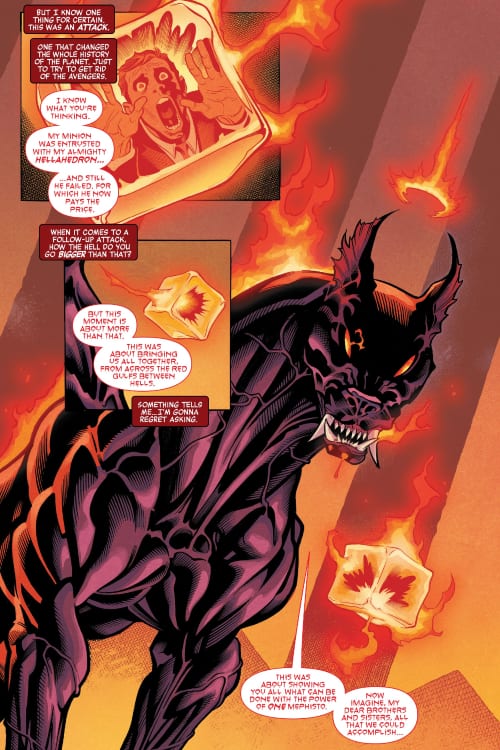 Like I said earlier, this series really suffers from being a setup for the next big event. But that next event will be much crazier than what we got here, based on what Heroes Reborn week eight indicates. So, what was this entire reality for? Why did Coulson work with Mephisto to create a world without the Avengers? Turn out, Mephisto didn’t care about Coulson, the new reality, or the Squadron Supreme. It was more like a demo to get his friends to invest in his new business. But granted, it’s a big business: 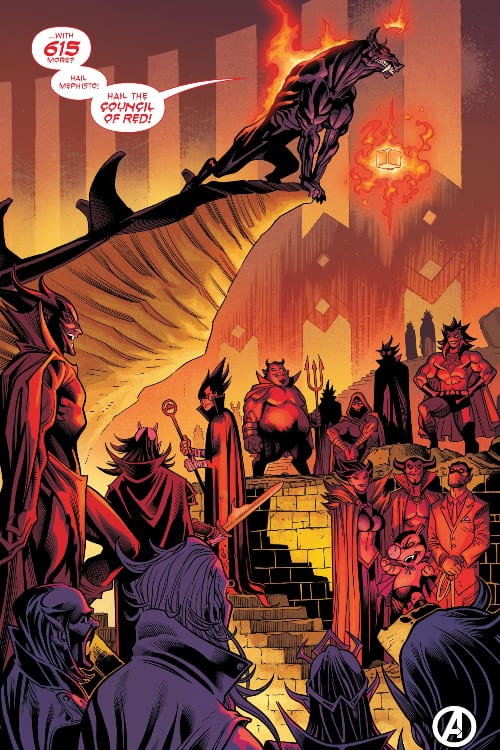 You just know Mephisto the Pig is the most ruthless of the 616 Mephistos. (Image: Heroes Return #1, Marvel Comics)

And Coulson? Mephisto imprisoned him in the Pandemonium Cube, or whatever’s left of it after Phoenix and Baby Starbrand started melting it. But I guess that’s how comics work sometimes. We just jump from event to— 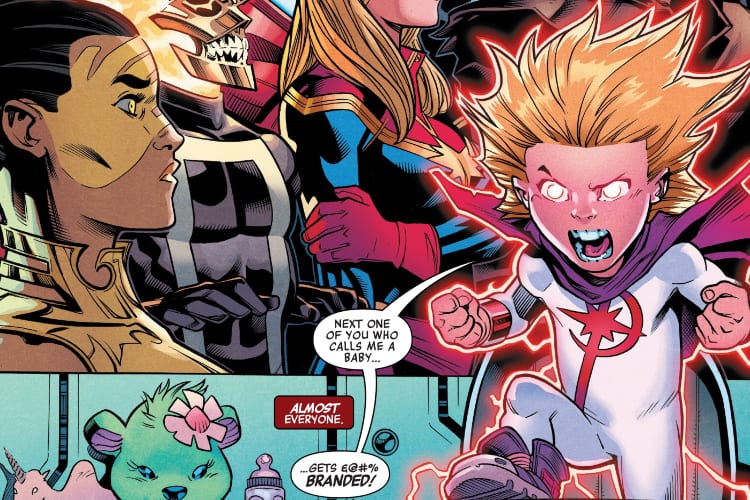