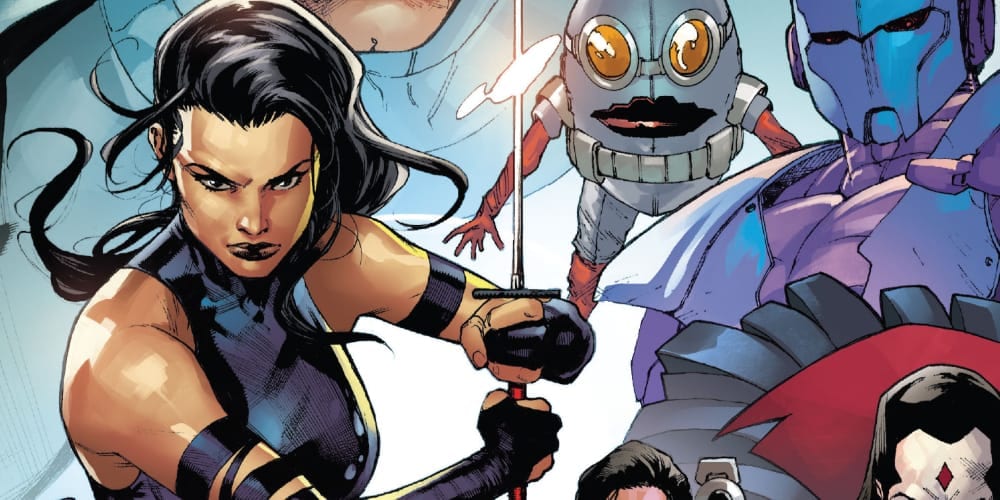 “Little hellions, kids feeling rebellious/ Embarrassed that their parents still listen to Elvis/ They start feeling like prisoners helpless/’ Til someone comes along on a mission and yells “bitch!” This stanza, from Eminem’s “Without Me,” perfectly describes the team Zeb Wells and Stephen Segovia put together in Hellions #1. Mr. Sinister, seeming to have enjoyed his role as the mentor in Fallen Angels, sees potential in a different set of mutants—the ones who can only satiate their powers with destruction. Wild Child, Scalphunter, Orphan Maker and Nanny, Empath…and Havoc? The Hellions are much more than the X-Men’s Suicide Squad or Thunderbolts, however. They are much more destructive than that.

Wells and Segovia Bring In the B, C, and D-List Mutants to Hellions #1 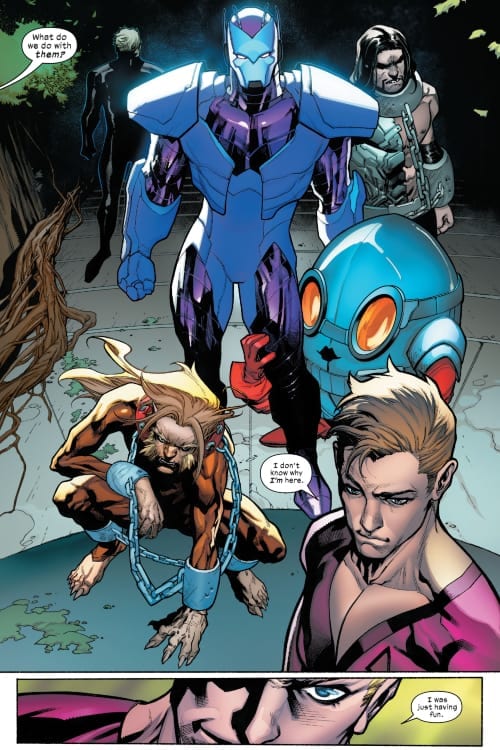 Throughout Hellions #1, Wells and Segovia give us examples of just how destructive each team member’s powers are. Or, in the case of Orphan Maker and Nanny, how destructive their personalities are. We don’t know much about these two characters. Orphan Maker’s actual powers are unknown. We know that he is strong and can teleport, but we don’t know if that’s his suit or his ability. We also know that he has the intellect of a small child, hence the cyborg Nanny figure, but there’s no way of telling how old “Peter” is under the mask. Hopefully, we’ll learn more about him throughout the series.

The other members are slightly better known. Wild Child was a fan favorite for a while—but also another “not Wolverine” character. The main difference? Wild Child can control the minds of wolves. Super helpful. He’s also immune to psychic attacks—okay, that is helpful. Scalphunter, culturally insensitive name aside, has always been a pretty interesting character. He, like the others, is prone to violence, but for a while, he tried to “go clean” and run a diner in the southwest. His mutant power gives him the ability to manipulate any technology to form whatever he wants. And what he wants are lots of guns.

The one member of the Hellions Wells and Segovia seem to have almost a sadistically fun time with is Empath. Empath can control peoples’ emotions. If he wants you to hate someone, you will hate them. Or if he wants you to feel joy, you will feel joy. If he wants to manipulate you into being in love with him, the way he did the Magma, well…you can see why the Quiet Council is very concerned.

The A-Listers on the new Hellions Team 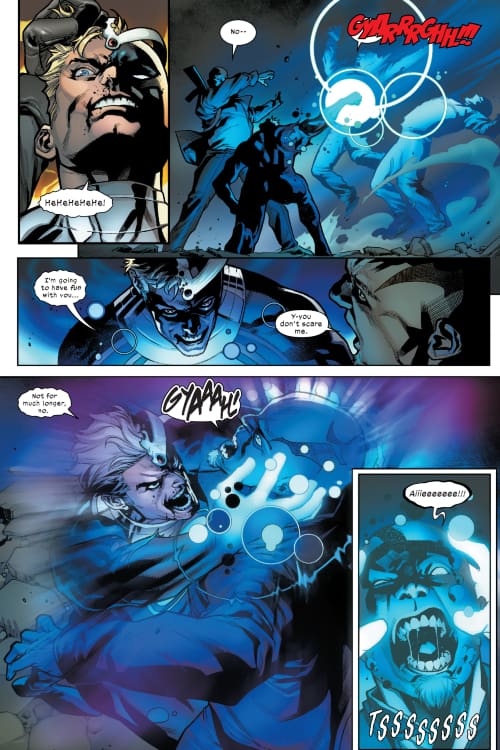 In the opening scene of Hellions #1, Wells and Segovia tap into Havoc’s buried madness, leftover from either X-Tinction Agenda or Axis. Probably Axis, when the Red Skull used Professor X’s brain to turn heroes into villains and villains into heroes. Most of the effects have worn off by now, but something is very wrong with Havoc, as you can see above. Certainly, this will be one of the driving plot points going forward.

The more enigmatic choice is Psylocke. She hasn’t done anything to make the Quiet Council worry, but Cyclops wants her on the team to keep an eye on his brother and Mr. Sinister. However, after Fallen Angels, Sinister and Psylocke have a working relationship. He helped her save the world. She’s the one fairly-balanced individual on the team, and that’s why they need her. She can be objective while the other members usually rely on emotional responses.

And finally, Mr. Sinister. Ever since House of X and Dawn of X reintroduced Mr. Sinister, he’s been a delightful character. Wells and Segovia don’t miss a beat with him in Hellions either. He’s the one to point out that they need a team to do the dirty work that even X-Force can’t do. X-Force is a precision team. They are surgical strikes. The Hellions? They are a nuclear bomb, and Sinister controls the remote. If that doesn’t sound like a great series, you need to reconsider if you actually like superhero comics. 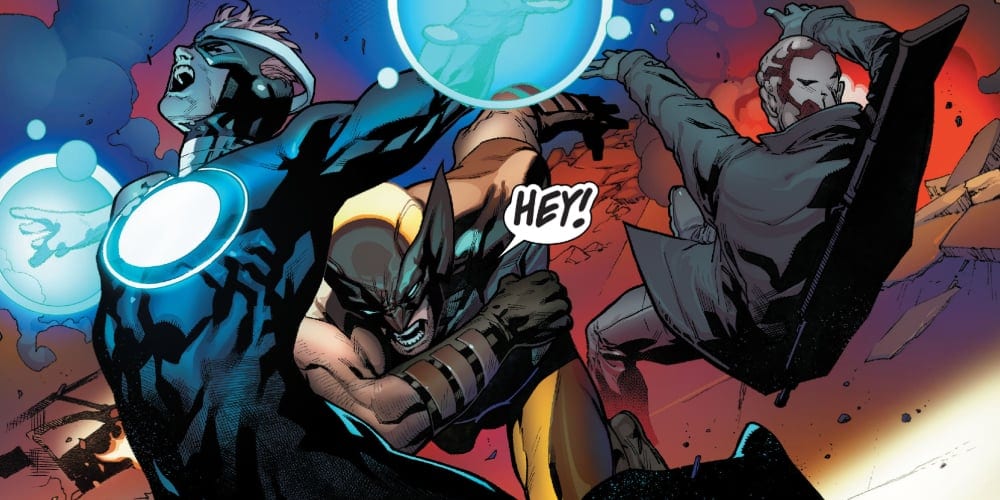 It’s really bad when Wolverine has to stop you from going too far. One of the most important laws of Krakoa is “Kill no Humans.” That’s not easy for this group, hence why Sinister wants to point them at targets they can kill if they need to. It would be easy to just skip to the point and say “team of psychopaths and sociopaths” without much character development. Wells and Segovia could have just thrown us into the first mission and explain through Quiet Council flashbacks. Instead, they do something smarter.

They show how each character ended up in front of the Quiet Council. The first issue is like a well-written thesis statement (I am a comic book literature professor, after all): Because these characters propose a threat to Krakoa, they need a way to express their mutant abilities constructively. The quote from Nightcrawler, in the beginning, sums it up much better: “It is folly to create an Eden, if one has no use for snakes.”

Wells and Segovia Pick the Perfect Villain for the Hellions

Throughout Hellions #1, Wells and Segovia seem to go out of their way to bring up the classic Mutant Massacre storyline. Both Sinister and Scalphunter had significant roles in that story. Sinister even jokes that Kitty Pryde stole the name of his team: the Marauders. And their first mission? Go to Sinister’s old base of operations to destroy his clone farm and confront the remaining Marauders. So, Hellions will pick up threads from Mutant Massacre, right? Wrong. It’s…

(Image: The Lord of the Rings: The Return of the King, New Line Cinema)

That’s right. Instead, we’re soon introduced to this scantily-clad sorceress: 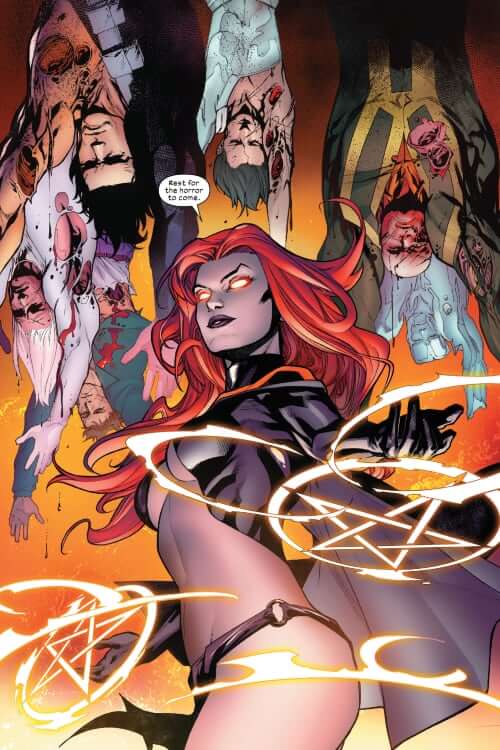 That’s right—Madelyne Pryor, the Goblin Queen. Along with Sinister and the original Marauders, she was one of the key players in another classic event: Inferno. Now, here’s why that’s a great pick: demons and goblins and monsters. If Wells and Segovia want to show us the Hellions truly tapping their destructive potential, they now have an endless supply of demonic redshirts. Ah, it’s going to be a blast. Actually, several blasts from whatever crazy guns Scalphunter invents on the spot.

Grade: A Free Trip to Limbo