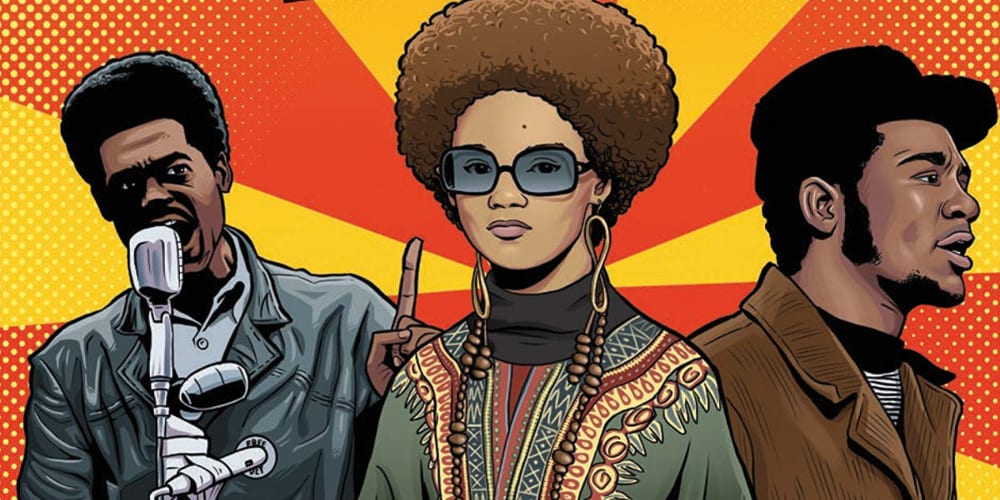 As a graphic novel literature and writing professor, I’m always looking for the best books to assign each semester. To do this, I have a checklist: One Marvel, One DC Comics, One Image, one medium-bending, one about everyday life, etc. But the ones I usually pick early on are the graphic novels about history. I didn’t always make this a priority, and the first few times I taught graphic novel studies, I just fell back on the standards, namely Maus and Persepolis. Generally, when I talked to colleagues about teaching “comics,” these were the only two they’ve ever read – some include Fun Home. And they think reading these few “respected” graphic novels makes them edgy or hip. They are brilliant works, but even if we’re looking at graphic novels about history, there are so many others to choose from too.

This was the topic of Revolutionary Spaces’ recent panel, “Interpreting History Through Comics.” Featuring three well-versed creators of historically-themed graphic novels, we dove into not just the how and why but the power these graphic novels about history hold. So, what makes these books so special? 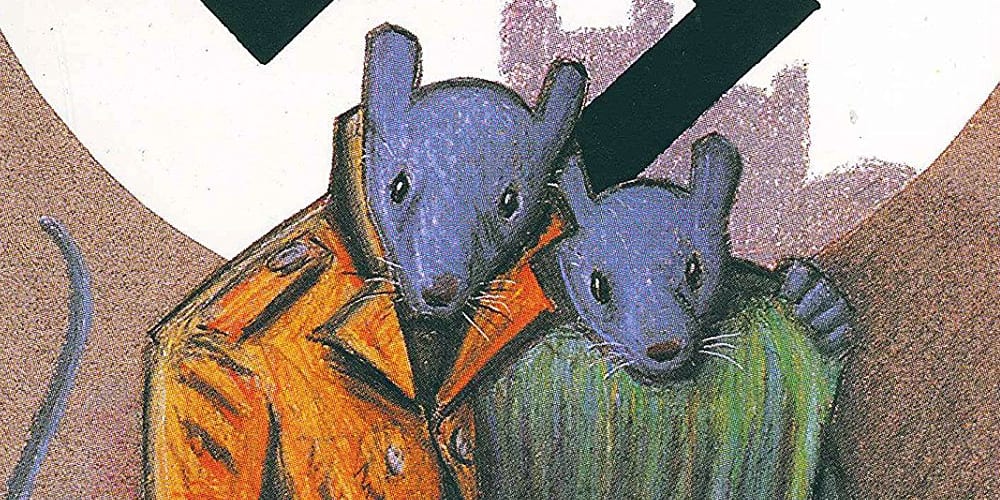 Justin Eisinger, the co-author of George Takei’s They Called Us Enemy, and one of the three panelists of the event, shared an amazing experience. He was asked to film and document Representative John Lewis as the civil rights icon cosplayed as himself marching through Selma. After reenacting the march, Lewis went to sign copies of his graphic novel memoir, March. The line was long – like, wait an hour for a two-second meeting long. As people waited, Eisinger watched as people read March for the first time. However, he saw something remarkable happening right before him.

“I would watch people in line reading 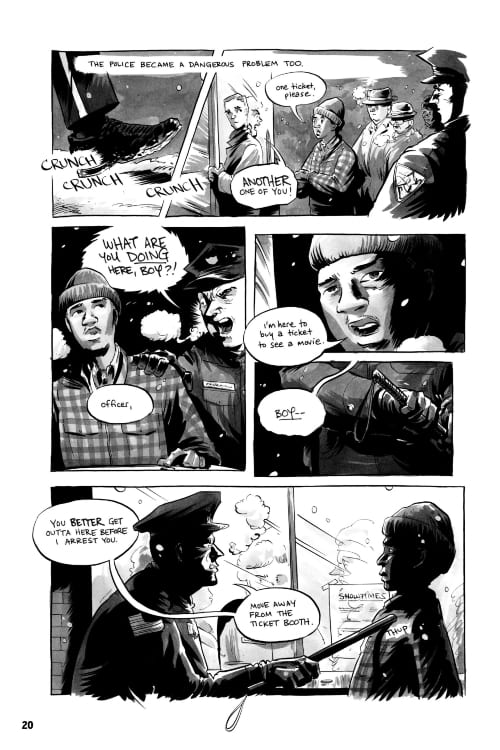 We see this page in full before we really start reading it. We see the crunching footsteps and the officer threatening a young man at the bottom. However, though we see the images, we don’t read the text in the same special way we look at the art. The text we still read from left to right, giving the images context. Yeah, it’s actually a circus trick for the brain, like that performer on a unicycle juggling while balancing a sword on his chin.

That’s a long academic way of saying this: comics and graphic novels connect to people in a way no other medium can. That’s why my students and the people in John Lewis’s autograph line changed so quickly. When reading graphic novels about history, we don’t “feel like we are there,” watching as observers the way we might if we were reading prose or watching a movie. Instead, we experience the history.

But herein also lies a problem: the format of comic books vs graphic novels. 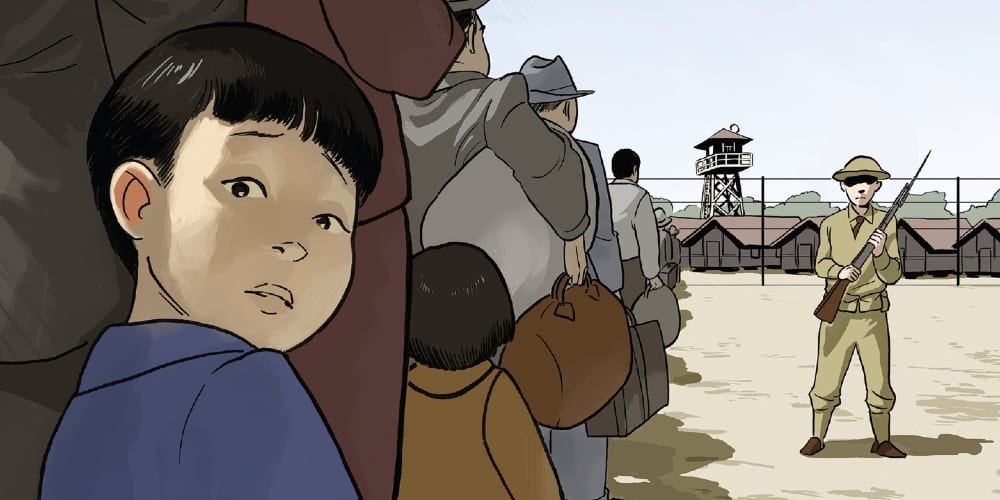 The term “comic books” still has a lot of negative connotations for “educated” individuals. That’s because, as David Walker, author of The Black Panther Party and several dozen superhero comics, said, “when it’s folded and stapled, it’s a throwaway periodical.” The comics are literally flimsy. We even debated on what other terms we could use instead of “comic books.” Graphic Novelettes? Graphic Episodes? Periodical Sequential Storytelling? But sadly, that ship has long since sailed. Those 22-page monthly comics will always be “comic books” regardless of pedigree. And, as Walker continued, it’s “difficult to advance the medium twenty-two pages at a time.”

However, graphic novels about history are rarely released in monthly installments first. And, as Walker suggests, when people see a spine, they see a book. And books are important, serious things. “There is a power in book spines alone,” Walker stated. If you think that’s a bold statement, think of the last time you went to a bookstore and just looked up and down the aisles until something caught your interest. That “something” is the spine of the book! We don’t even base our first judgment of books on the cover; we base it on the presentation on the side of the book. That’s a benefit for graphic novels about history especially because books such as March, They Called Us Enemy, and The Black Panther Party advance the “medium 150 pages or more” at a time.

Graphic Novels About History Still Have an Uphill Battle to Face 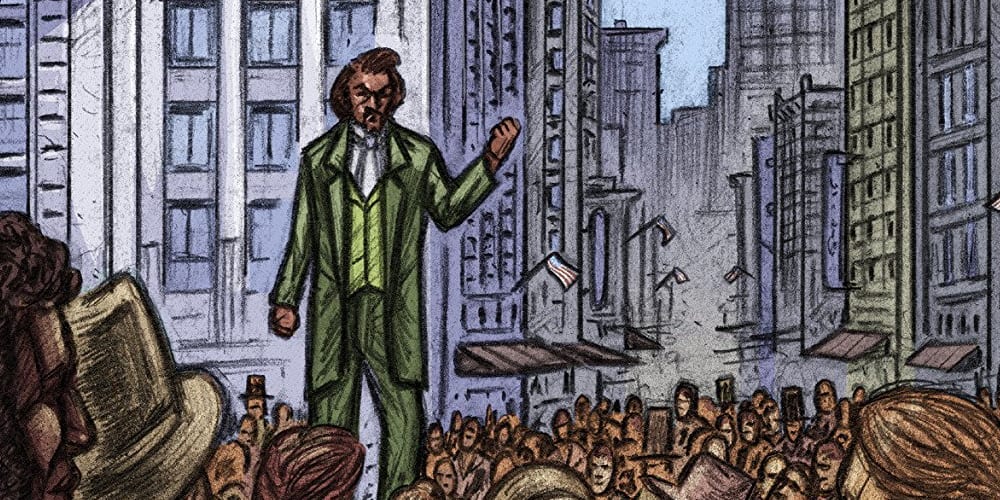 Despite the progress we graphic novel educators have made, there are still problems getting other educators and libraries to see the value of graphic novels. Some of this is because of the stigma of “comics” not being sophisticated enough for study. But the other problem is that a lot of educators still don’t really know what they are. As Walker told us, “we’re still explaining to library administrators that when we say graphic novels, we don’t mean pornographic novels.”

Yet we are getting there. And hopefully, soon, we won’t have to keep defending a graphic novel curriculum.

Graphic Novels About History: Past to Present – to Future? 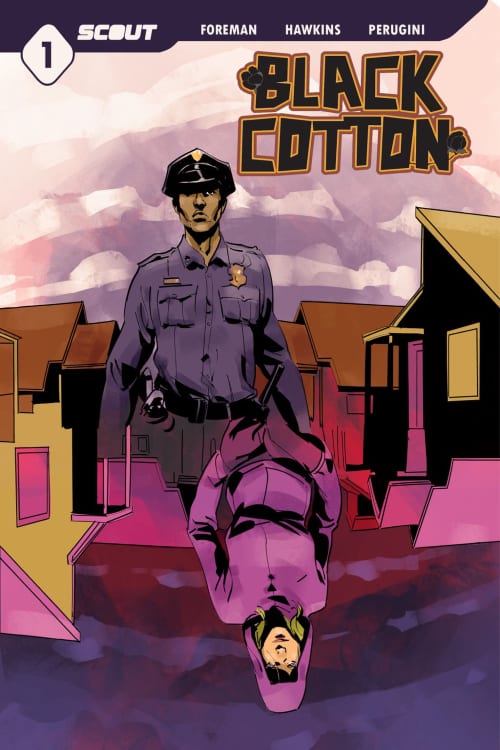 Because reading graphic novels about history is a bit more intimate than reading prose about the same subjects, it’s easier to make parallels between the present and the past. Eisinger was working on They Called Us Enemy, about Japanese-Americans forced into internment camps, as he watched news of a “Muslim Ban” gaining steam. What he couldn’t have known is that Takei’s story would be even more relevant just a few years later, as hundreds of asylum seekers, kids included, were separated from their families and put into cages.

Of course, this isn’t exclusive to graphic novels about literature. Who knew that Sinclair Lewis’s novel It Can’t Happen Here, or Charlie Chaplin’s The Great Dictator would still be relevant in 2021? However, it is easier to distance the experience of reading a novel and watching or movie. The experience readers have when reading graphic novels about history makes them more likely to feel the pain of people suffering the same oppressions and atrocities today.

This is both a good and a bad thing. It’s good because the more people read graphic novels about history, the more they empathize with others. But the very fact that this is possible shows that, in many ways, we haven’t come very far as a society. When talking about his graphic novel The Black Panther Party, which primarily took place in the 1960s, Walker said that he doesn’t “want my book to be relevant right now.” To be relevant now means we are facing the same issues we did sixty-odd years ago.

Some Must-Read Graphic Novels About History 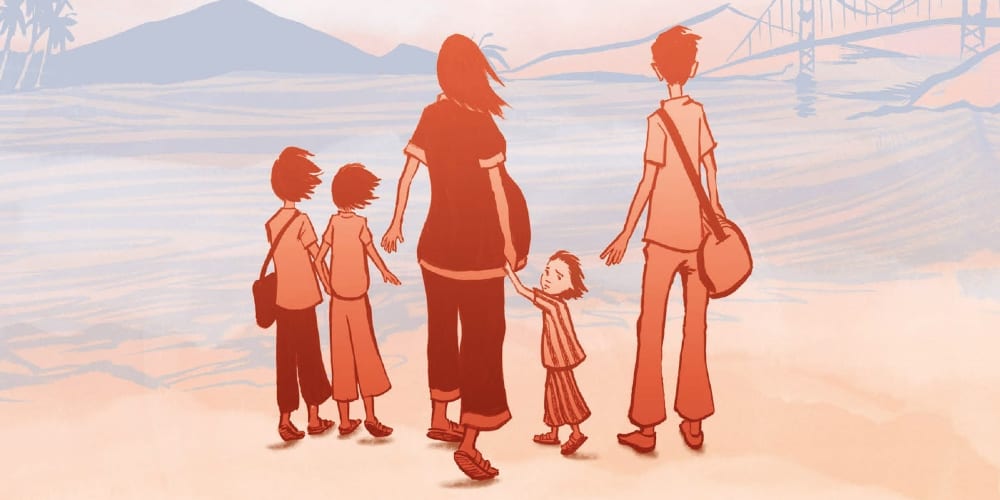 (Image: The Best We Could Do, Abrams ComicArts)

“I’m a strong believer in the medium of comics,” Walker said early on in the panel. As we said before, graphic novels about history really make the reader experience the moment. And there are some absolutely beautiful and sometimes painful options out there. Here are a few:

This has always been one of the “go-to” graphic novels about history, as it is not just a biography about Spiegleman’s father surviving the Holocaust. It’s also a memoir about his relationship with his father. Most of the books on this list will be heart-wrenching, but this might be most of all.

Call this a companion piece to Maus, but I’ve taught it both with and without Spiegleman’s masterpiece, and it works just as well on its own. We know that Magneto is a Holocaust survivor, but Magneto – Testament shows just what he survived. But if you are looking for a mutant brawling book, look elsewhere. This is more at home in the graphic novels about history category than it is superhero stories. In fact, there’s only one panel that might show his power in action. Also, again, be ready to cry.

The Best We Could Do

When South Vietnam fell in the 1970s, Bui was only a child. However, she vividly tells the story about her and her family running for their lives and everything they faced along the way. It’s hard not to think about the current border crisis, where families are desperately trying to seek asylum and willing to risk their lives to flee from a dangerous region. This is also a story that we don’t learn enough about in school. In fact, many works on this list could use more presence in schools.

Joe Sacco is one of the best journalists in modern history – and one of the best graphic novelists. He combines his research with sequential art to create graphic novels about history that are mesmerizing. Palestine might be his best. Sacco interviewed over 100 Palestinians and Israelis. But don’t miss some of his other works, too, such as Footnotes in Gaza, Paying the Land.

A Rundown of More Great Graphic Novels About History 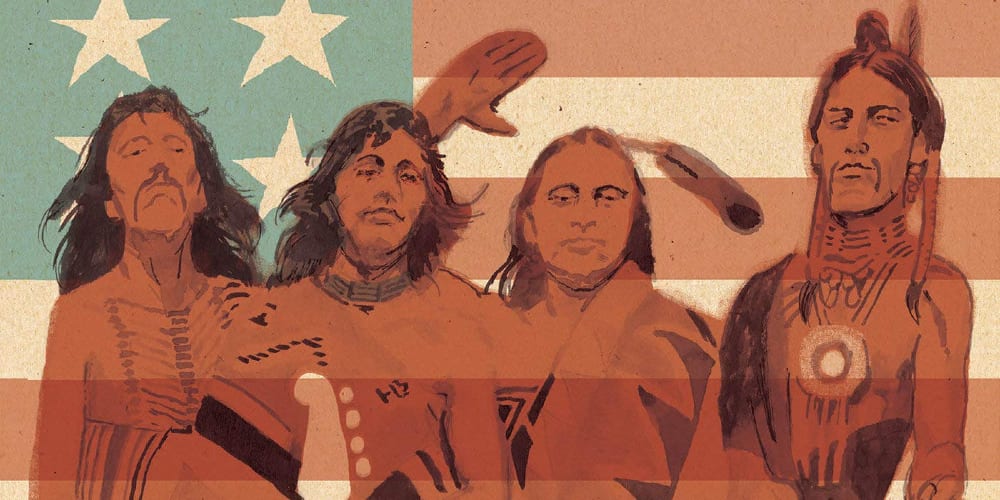 I could go on for several thousand words recommending graphic novels about history, but that might be a bit too much, so here are some others to check out:

Do you have any favorite graphic novels about history? Tell us below. Seriously – I could always use more titles to assign my students.