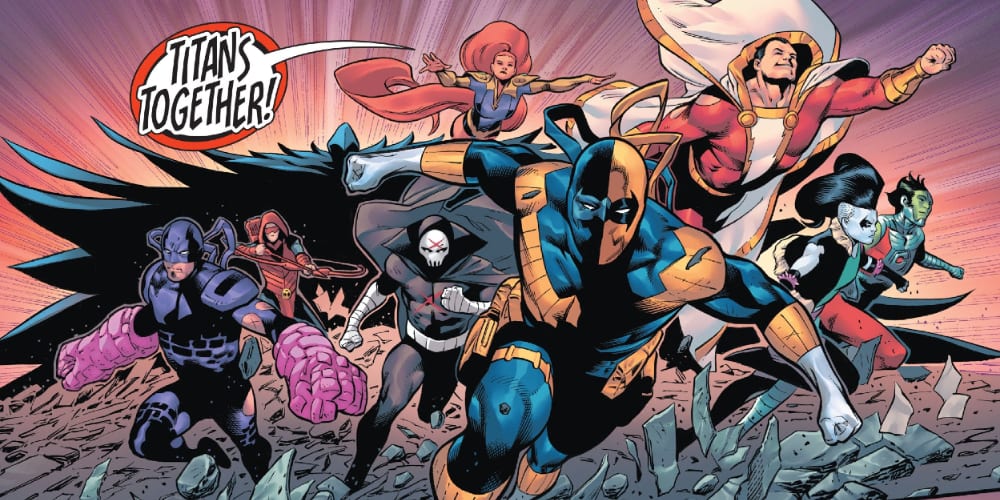 The week six Gotham Future State stories all have two things in common. Firstly, they’re all really damn good. And secondly, they’re all very intense. But there’s even more good news than that! Answers! Indeed, we get a lot of pieces to the big Future State puzzle. Here, we’ll look at Dark Detective #2, Robin Eternal #2, and, because it would be way too much for the DC Future State coverage, Teen Titans #2. 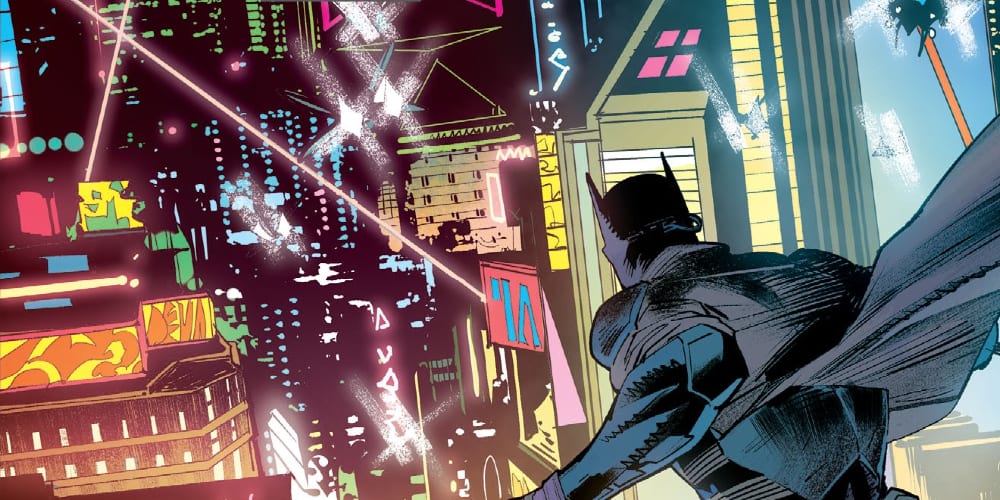 Up until this week, if someone asked me if The Next Batman or Dark Detective was the better book, I would have said The Next Batman without a doubt. But with Gotham Future State Week Six, I’d have to hesitate. This was one of the best anthology issues yet (even if it only covers two stories), from the writing all the way to the lettering. Also, we see just how crazy this editorial team is. Whoever planned the release calendar for Future State is a mad genius. So, let’s take a look: 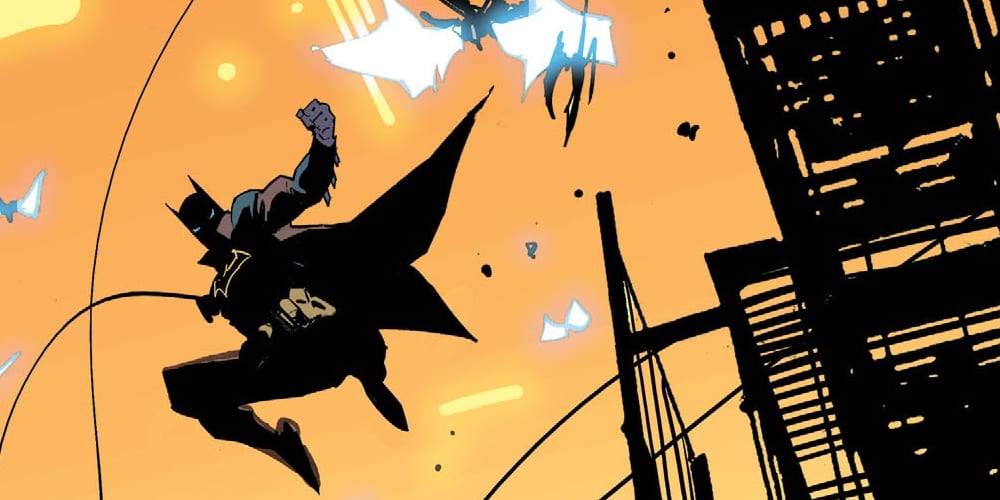 Back in The Next Batman #2, Poison Ivy and Catwoman raided a CEO’s penthouse to get valuable information about the tech the Magistrate uses. Their mark was Dax Dilton, the Steve Jobs of robotics manufacturing. They find out that not only is he supplying the cybers’ tech, he also wants to go public, which would give the Magistrate a chance to take complete control over it. However, in Dark Detective #3, we see a very similar situation that could change Dilton’s. Because CEO Carl Bennington, who wanted to sell parts of his company, got a nice little offer from the Magistrate: a bullet to the head.

Though corporate espionage isn’t usually the most exciting plotline for a comic, these actions bring us closer to understanding who the Magistrate is and why Peacekeeper-01 killed Bruce Wayne. It’s still more than likely that they knew Wayne and Batman were the same person, but now, as Bruce is starting to realize, the Magistrate may have targeted him for Wayne Enterprises, not for his alter ego. In doing so, they moved in on Wayne Enterprises and now have access to tech Wayne wanted to keep buried. For instance, micro surveillance drones.

But would Lucius Fox, the CEO of Wayne Enterprises, allow them access? That’s a complicated question, but we’ll get a few more clues about the Fox Family’s role during another Gotham story in Future State Week Six.

In Week Six of Future State, We Finally Get the Gotham Moment We’ve Been Waiting for: Batman V Batman! 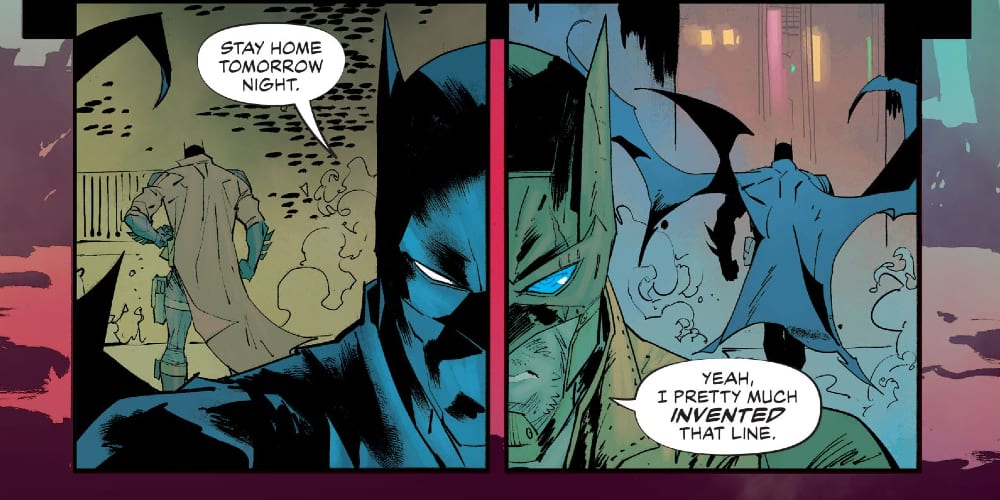 While the Dark Detective goes “fly fishing” for the micro-drones, he runs into a bit of Magistrate trouble. However, like many other citizens in Gotham, the new Batman saves him. What happens next is the best back and forth between two gruff-Batmen: threats, snide comebacks, and lots of testosterone-driven posturing. The entire exchange is only two pages long, but between Tamaki’s writing and Mora/Bellaire’s art, we get the most epic non-fight we could have hoped for. But they didn’t need to fight. They just needed to stare each other down. However, I hope we see them meet up again in Dark Detective #4 or anywhere.

This reminds me—wasn’t Bruce Wayne on that prisoner train in Catwoman #1? So, it looks like Bruce isn’t winning this one. Additionally, from Justice League #1, we know that it’s Tim who saves Gotham. But now that we’re in week six of the Gotham Future State stories, the entire picture is starting to come together. 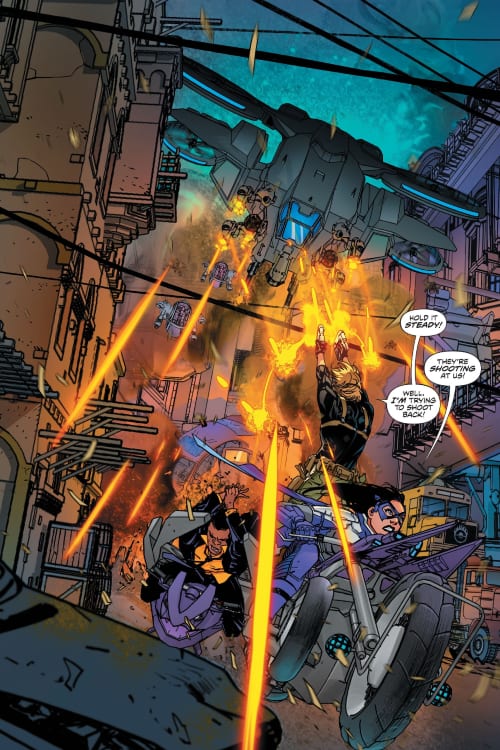 The second part of Grifter’s story was a lot of fun, mostly because Di Giandomenico/Fabela’s art is incredible. There’s a chase scene that feels more cinematic than some actual movies’ chase scenes. And the final battle? Epic. It’s worth reading for the incredible art alone. But the main function of art is always to serve the story. And while Rosenberg’s story is a lot of fun, there’s one reveal that changes everything for the Gotham Future State stories before, after, and during week six of this massive event.

Before we go on, you might be asking why this crucial detail is in a backup story of a C-list hero’s story? Well, it’s rewarding for everyone reading every detail. In effect, this is like Volstagg revealing the Infinity Stones’ existence in the mid-credit scene of Thor: The Dark World. So what do we learn?

Luke Fox is the other grifter in the title Grifters. And who is he working for, or on behalf of? The Magistrate. He didn’t want Cole Cash’s help at all. Luke just wanted Cole to bring him to Huntress, his actual target. So, he made a deal with the Magistrate that he would help them get her if they let him walk free. So, he’s really not on the heroes’ side right now. And in Next Batman we see him training. What does this mean? Could it be possible that Luke Fox is Peacekeeper-01? That would be a crazy twist, but pure comic book lore—Brother vs brother for the fate of Gotham.

Guess we’ll find out in the next couple of weeks. 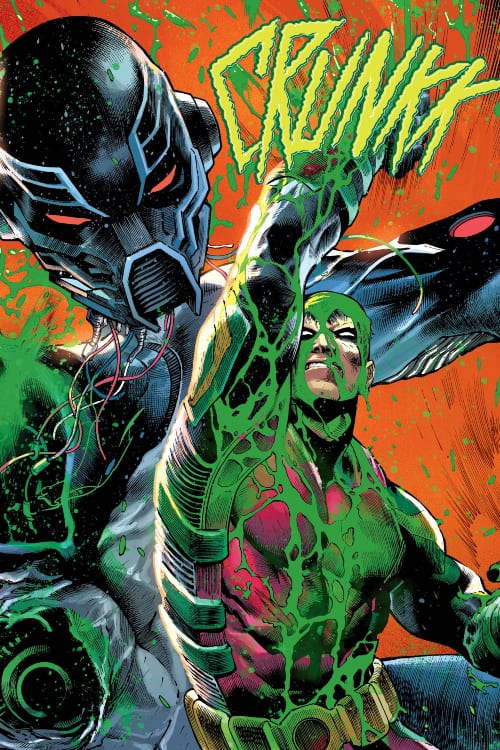 Well, that’s what you get when you criticize a man’s decision to wear green goo. (Image: Future State: Robin Eternal, DC Comics)

If you didn’t already love Tim Drake, you will now. This conclusion was almost as crazy as Grifters. Granted, we don’t learn anything momentous, other than that this takes place before The Next Batman #2’s Batgirls. However, the story still feels very important to Gotham Future State’s landscape and is one of the best issues of week six regardless. Drake is covered with a poisonous resin that keeps him alive, driving him mad and slowly killing him.

But even though we learn that ingesting the resin is a “death sentence,” we don’t know what kind of death. It looks like it will eventually make him emotionless, even if he is invincible and has super strength.  He doesn’t know that, though, and figures that he’ll probably die, so he takes the convoy carrying the resin down with him into the Gotham harbor, where the organic materials in the water will destroy the substance.

But, of course, that doesn’t kill him. Interestingly, we now know that this is earlier in the Gotham Future State narrative, despite concluding in week six. Will we once again see this new Eternal Robin when everything hits the fan? Hopefully, we do—because his story feels like it is just getting started. 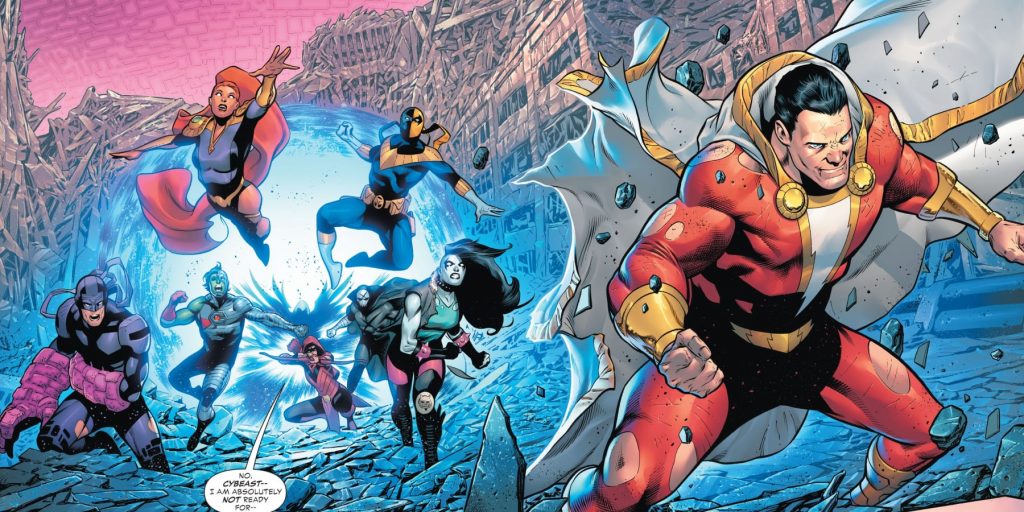 Oh, man, where to start with this one. We learn a lot in this issue, connecting The Flash, Shazam, and Black Adam together. The only answer we don’t get is why Dick Grayson puts on the Deathstroke mask. He says it’s “for protection,” but that makes no sense at all. But let’s look at what we do know, now that we have a ton of answers from this (not quite) Gotham Future State week six story.

Who is Responsible for Unleashing the Four Riders of the Apocalypse? 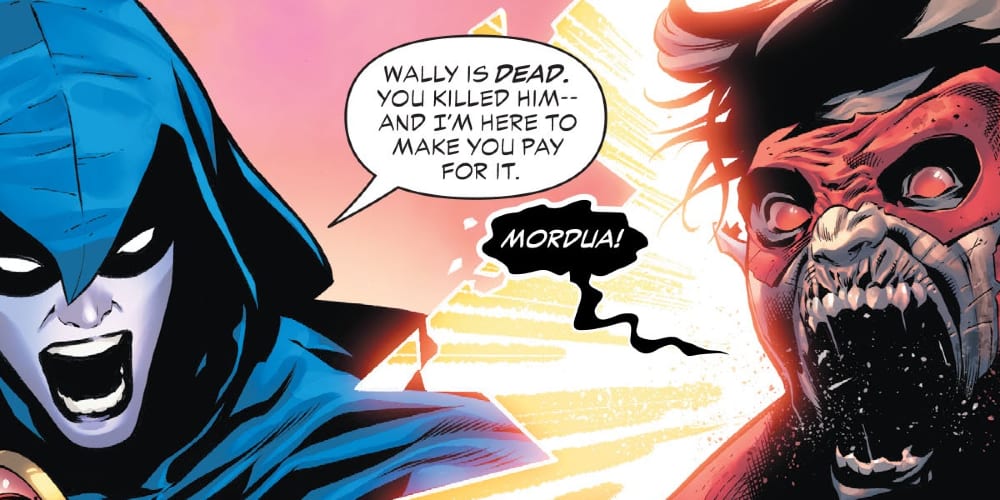 First, we find out that Red X called down the four riders—but not for evil reasons, which is odd, because, you know, they’re the FOUR @#$%^&* RIDERS of the APOCALYPSE. Apparently, the Teen Titans were screwing up so badly that Red X felt the riders were a better option. We don’t get much more than that, but it’s enough. Because of his actions, half the world is dead. Pretty bad for an oops action, huh? The Riders then chose avatars, and we know that Famine chose Wally West. War appears to be Ares, and Death is some strange creature. But Pestilence? They got Roundhouse. That’s just cruel.

This is the final battle (maybe) of the Riders and the Titans. And it’s pretty big, especially when Red X uses a modified H-dial to call 8-4-8-2-6-7, “Titans.” This brings forth all the dead Titans’ spirits, including one that makes DC Future State: The Flash even more painful than the terrible writing.

Wall West was never alive during The Flash series. So, every time Barry tried to reach Wally, it was all a trick. We knew that Famine was using his love for Wally to bait him, but there was never a chance that Barry could have succeeded. As a result, the entire Flash family is dead, and probably Iris too. As well, the editorial team chose the release calendar for these two titles perfectly. It’s a real gut punch coming in the (again, not quite) Gotham Future State week six stories.

What is Billy Batson Guarding in the Rock of Eternity? 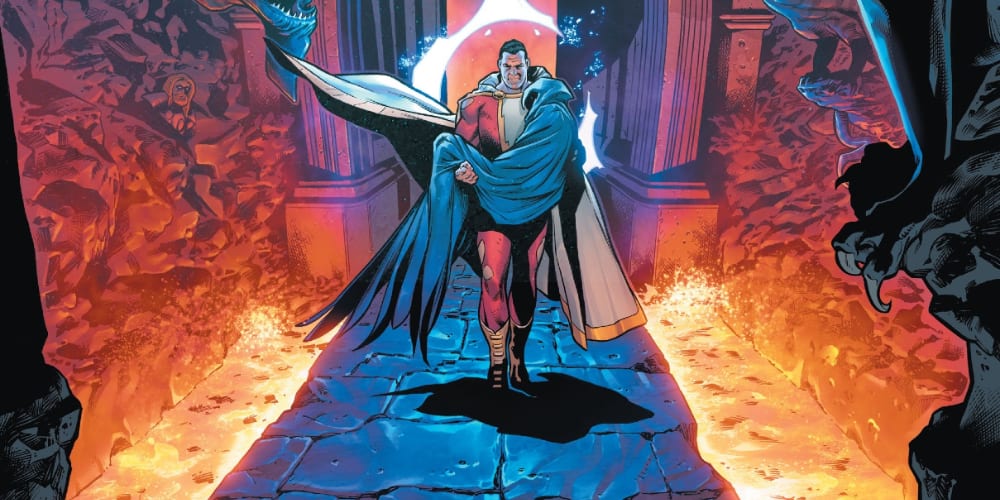 Future State: Teen Titans #2 comes before Shazam #1, where we got one of the most horrifying moments of this entire event. Billy Batson and Shazam were split into two beings, and Billy, having the stronger soul, was left to make guard the Rock of Eternity. But we never asked what he was guarding. The obvious answer would be the character who is usually inside the Rock: Black Adam.

It isn’t. It’s the Riders, all contained within Raven’s form. This is what Billy chained himself to the rock for—to make sure that the Riders of the Apocalypse could never get out again, and with them, Raven is also trapped too, as another prison. But how long will this last? Sadly, in Gotham Future State week six, we get that answer too.

The Titans’ Actions Will Emerge Nearly 1000s of Years Later. 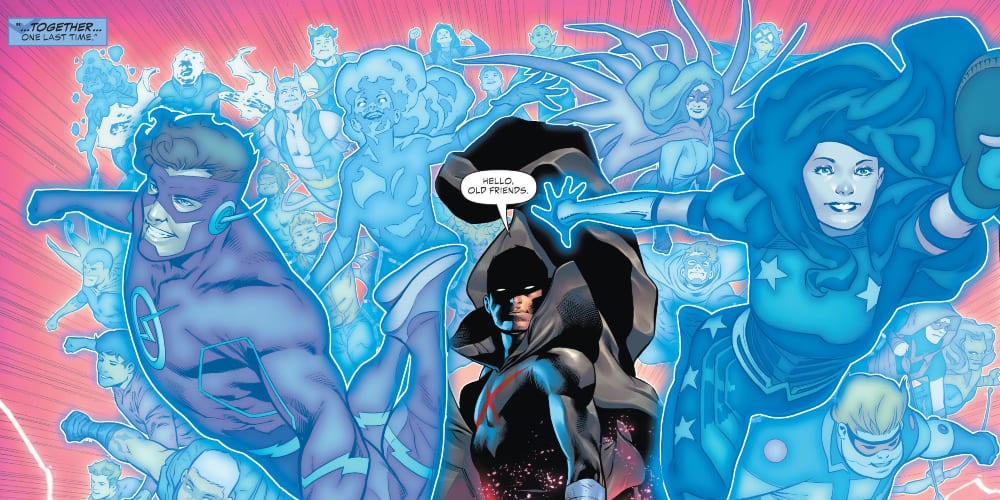 In Future State: Suicide Squad #1’s back up Black Adam story, we meet the “Unkindness.” This is a group of foul entities, including the seven deadly sins, a corrupted Dove, Vandal Savage, and others. Those others? You guessed it—the Four Riders of the Apocalypse. When Raven imprisons the Riders into her own form, she tells Shazam that she felt “an Unkindness.” And that’s going to turn into something massive.

When we meet the Unkindness in Black Adam, they’re all named except for one person. This fine, um, lady? 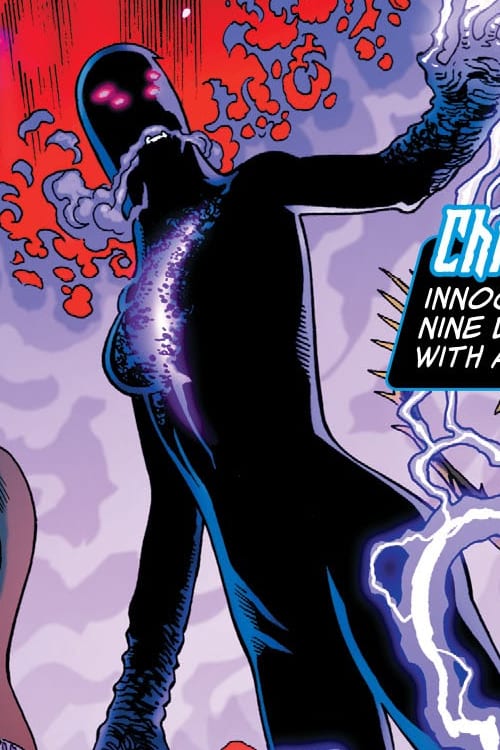 Well, now we know who and what she is. This is Raven, twisted by hundreds of years of keeping the Four Riders within her and apparently merging herself into one entity. A Lord of Chaos. So, 832 centuries later, and the Titans are still screwing up the universe—and they don’t even exist anymore.

Before and After Gotham Future State Week Six

We’re getting so close to the end (yes, I’m totally aware it has ended. Our coverage will catch up!), and the event is getting more exciting—especially from the Gotham stories in Future State Week Six. Now, on to the checklist!