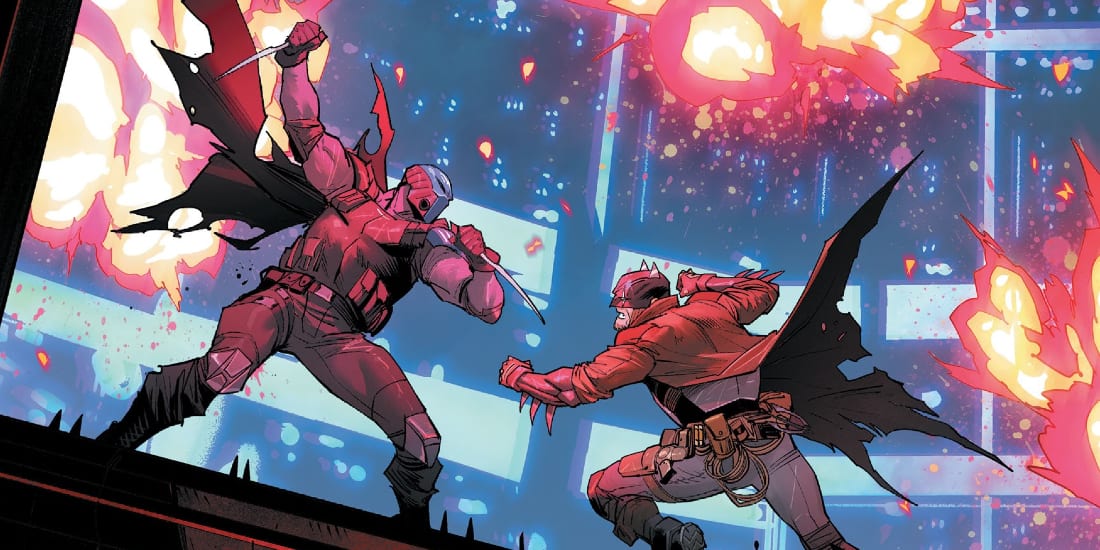 The end is here! Or is it? So far, many of the “endings” of Future State haven’t actually felt like conclusions, and the same goes for Gotham week eight. For eight weeks, this event promised a big ending and some clarity about how this world developed. But aside from some answers, we’re left with more mysteries, like this is the Lost series finale. So with that, let’s go into the last week of Gotham Future State.

Dark Detective  #4 Ends With Big Moments But No Answers 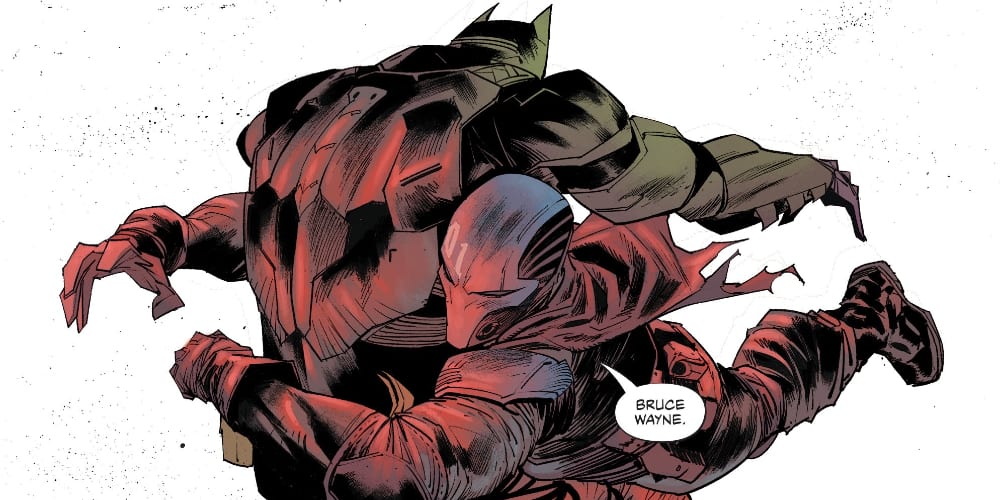 Finally, we get the showdown between Batman and Peacekeeper-01, but if you were looking for a well-developed conclusion, you’ve come to the wrong place. We also get the end of Red Hood’s story, but it’s not that much better. However, both stories have one thing in common that is good. Before the endings, they’re pretty good. It’s just the last few pages where it all falls apart. So, let’s see how they went high but fell flat. 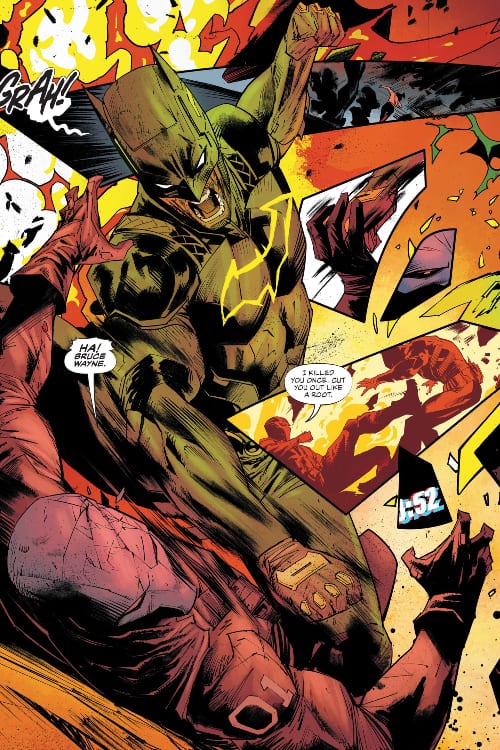 Thanks to Future State: Justice League #1, we know that the Next Batman saves Gotham, but he doesn’t do it in week eight. In fact, we don’t see how he does this at all, and the ending of Dark Detective only confuses that narrative even more. Previously, Bruce Wayne discovered that the Magistrate has highly advanced monitoring systems. They can see anyone, anywhere, at any time. So, he’s determined to end their fascist rule.

But this final chapter is very rushed. Suddenly, Hannah, the daughter of the conspiracy theorist who rents a room to Bruce, becomes the most important character in the story. She apparently works in the exact department Bruce needs to take down the surveillance. To help her expose everything about the Magistrate, Batman distracts the peacekeepers by attacking the building.

It’s more than just a distraction, though, and it brings Peacekeeper-01 out to battle Bruce one last time. After Hannah finishes doing her thing, and she’s safe, Bruce blows up the building with himself and Peacekeeper-01 still inside. Of course, we don’t actually see them die. It’s all very “Dark Knight Rises” in that regard. And we’re left with a cool little mantra: “The end of shadows is light.”

Okay, so we know this happens after Jace starts his Batman tenure, but it must be before he “saves” Gotham. But if this is the end of the Magistrate, what did Jace save Gotham from? Or did he take the credit for Bruce’s final actions (which doesn’t go with Jace’s character)? And we might not ever find out since the event is over now. 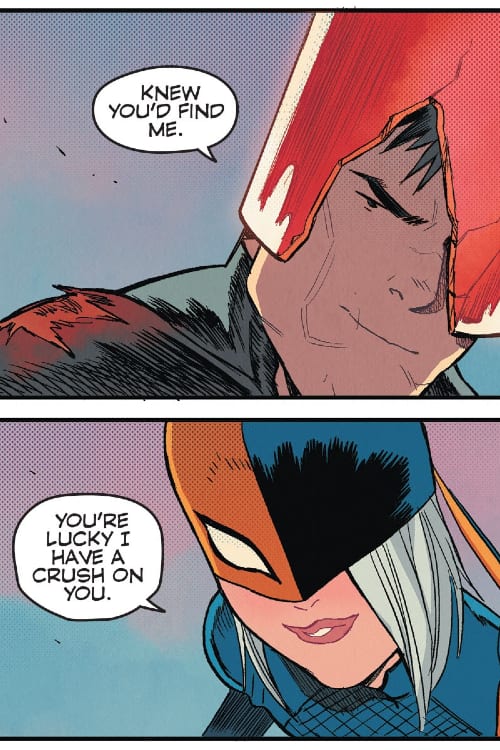 While it felt like The Dark Detective should have answered more questions, Run, Red Hood, Run gets a pass for its cliffhanger and added mysteries. That’s because we’re actually getting a new series spinning out of this week eight story, Future State: Gotham. So, who supplied Jason with his motorcycle? Who is the voice in the shadows? Why did the Magistrate add Red Hood to the kill or capture list, and then claim it was an error? We’re going to have to find out.

But we do get a resolution to the Mad Hatter story, or, as it turns out to be, the White Rabbit. As it turns out, she stole the Mad Hatter’s mind control technology and used it to create red hood gangs, putting the Magistrates’ eyes on Red Hood himself. This might explain why they added Jason to the Mask list, but not why they claimed it was an accident later. Of course, there’s a lot of unanswered questions Williamson can explore in the new series.

Then there’s the story’s breakout star, Ravager, AKA Deathstroke’s daughter, Rose Wilson. Rose and Jason have a very fun relationship, and it turns into something more at the end as he agrees to go to her dad’s secret island with her to take a break from Gotham. But too bad for Jason, this new romance with Rose will have to wait. The mysterious voice (which is either Bruce or Lucius Fox…or Alfred?) tells him that Red Hood needs to stay in Gotham until the Magistrate falls. Obviously, this takes place before Dark Detective Part Four. 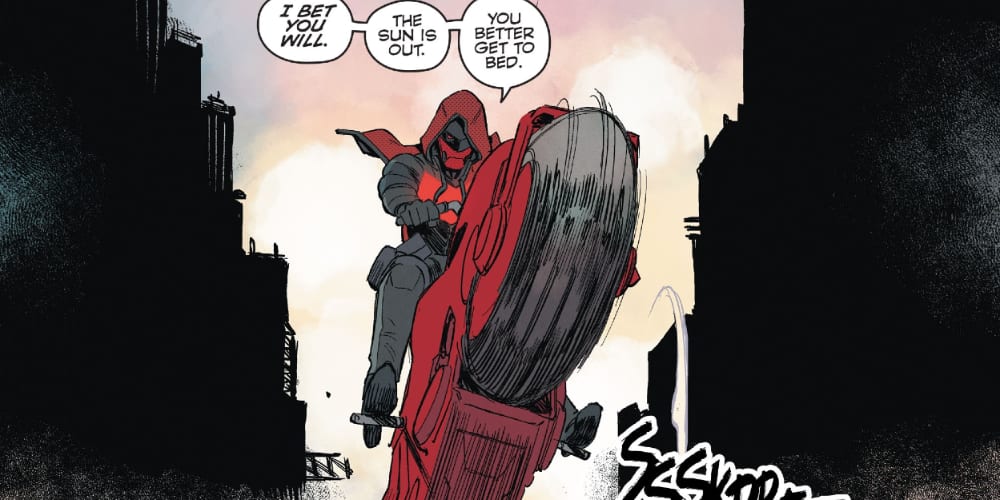 This is the last big Batman story of DC Future State, but if we’ve learned anything by week eight, it’s that these writers had more story than the space the comics allowed. Tamaki was building something much bigger but started small. A 12-issue, slow-burn maxi-series with the same ending would have been amazing. She had 4. But there are still more stories to tell. And it looks like we’re going to learn how the Magistrate took over in the first place. We just want to know how the Next Batman ended it. 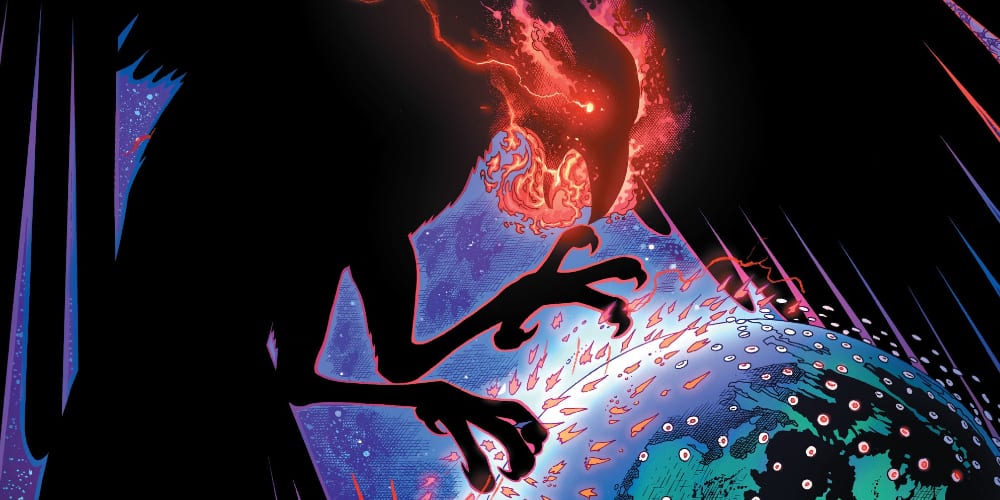 On to “the book that would make the DC Future State recaps too long, so we made the editorial decision to include it in Gotham Future State” part of week eight. Otherwise known as Suicide Squad. Now that the Suicide Squad red band trailer blew everyone away, seeing Peacekeeper here has a whole new meaning. But it’s not just The Suicide Squad news that makes this issue exciting. We also finish Black Adam’s story. And we just learned the release date of the movie too. However, what happens in these two stories is slightly confusing.

Task Force Next Part Two Features the Waller We All Love, Doing Something Shady…We Think 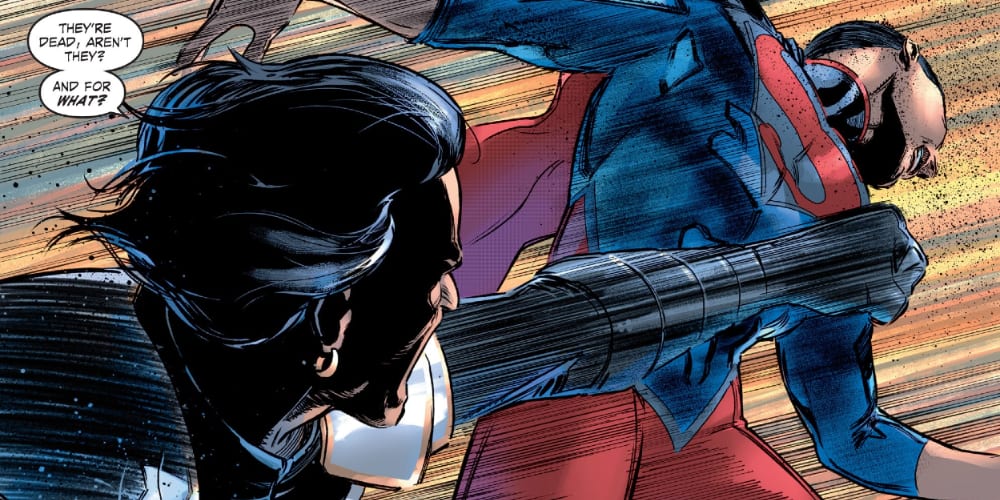 Last issue, Amanda Waller had fled to Earth-3, home of the Crime Syndicate, to pursue her ultimate agenda. Which was to, um, do something? It’s not clear. However, while she employed the “Justice Squad,” a kind of Dark Avengers version of the Justice League, Earth-Prime’s Suicide Squad showed up to bring her home. Just one problem. The longer the squad stays on Earth-3, the worse their physical condition gets. Yet somehow, Waller found a way to avoid this issue.

Waller is one of the most frightening characters in comics. Viola Davis nailed the character in Suicide Squad and will hopefully bring even more of that cold cruelty in The Suicide Squad. How far does Waller go? She sets up her Earth-3 counterpart to distract the Suicide Squad, offering Earth-3 Waller’s family security. But when the squad shows up at this other Waller’s apartment, Earth-Prime Waller blows it up. She literally kills herself to further her agenda.

And that Agenda is… 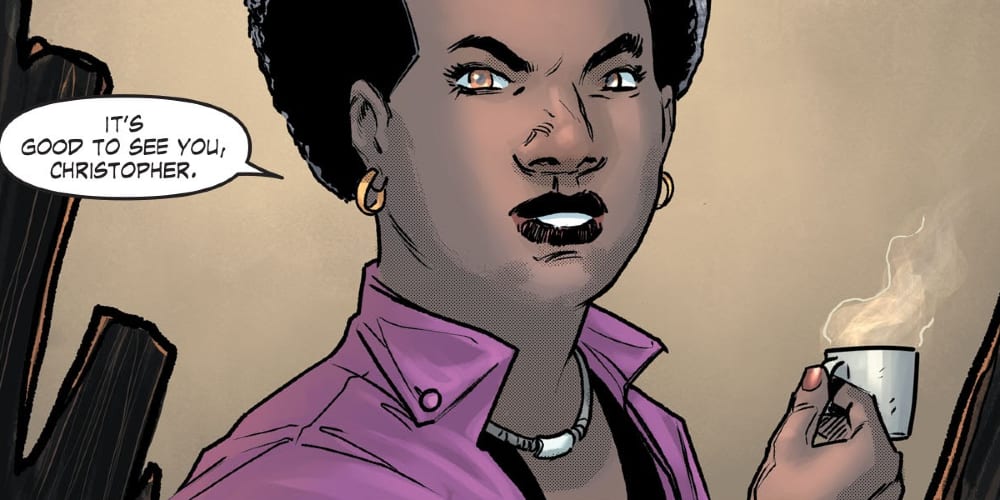 All of this leads to a final confrontation between Superboy-Prime, brought over to Earth-3 with Waller, and Peacemaker. Peacemaker speaks to Superboy’s heroism and gets through. He refuses to follow Waller’s orders any longer and destroys her neck bomb detonator. Apparently, this is what she wanted. The device’s destruction activated a kill switch that sealed off Earth-3 from the rest of the Omniverse. Superboy, which she calls Superman at the end, is now stuck there to protect the world.

Earth-3 has always given the multiverse issues, but Waller’s plan seems a bit convoluted. So, she wanted to put Superboy through all of this as a test (which kills her and her Earth-3 counterpart) to make sure that Earth-3 had a Superman after sealing it off. But if Earth-3 is sealed off, why would she care? And why did she have to have a kill switch? Waller isn’t sentimental and doesn’t give a damn about what Superman represents. Because of this, her final words just don’t match her character over the years. If this were Nick Fury, who shows his care and belief in superheroes even if he’s a bit cold, that would make sense. But Waller? Not so much. 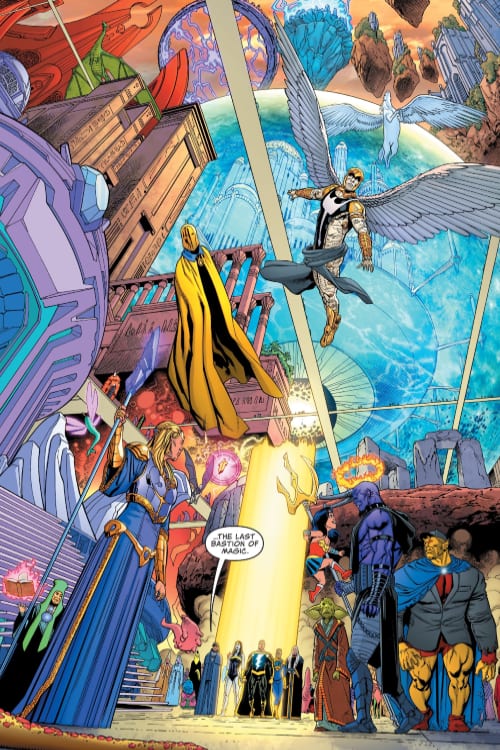 While the beginning of the Unkindness arch wasn’t great, rooted in Future State: The Flash. But when the Teen Titans took on the Four Riders, it started to get interesting. And it got dark. Shazam imprisoned Raven, who contained the Four Riders within herself, in the Rock of Eternity. Following this, the devil Neron manipulates Shazam to separate from Billy Batson. He convinces Shazam that it’s Billy’s innocence needed to contain the Unkindness. So, Shazam chains Billy to the Rock and goes back to defend Earth.

While there, Neron drives Shazam mad, convincing him that demons possess people and lead Shazam to murder hundreds of people, good and bad. In the end, Deadman possesses Shazam and forces him to call out his own name, returning Billy to the world and sending Shazam to the Rock of Eternity. As a result, Raven takes his power, becoming the Unkindness. Sure, none of this takes place in Gotham, but a story this twisted could only be in Gotham Future State week eight. 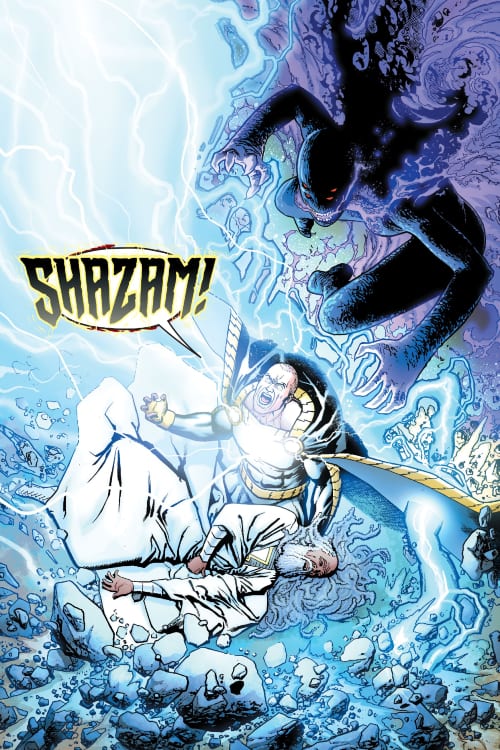 At some point over the next 800 centuries, the heroes find a way to contain the Unkindness and her entourage. But when she returns, she quickly starts destroying the universe, and the Justice League of DC One Million turns to a now pacifist Black Adam for help. After fighting the spirit of rage, Black Adam reawakens, ready to kick ass. But first, they escape to “The Last Bastion of Magic.” It’s here where our heroes will make their last stand against the Unkindness.

Yeah, that doesn’t go well. In fact, the heroes fail so badly that the original Shazam, the Wizard, sends him back to the Rock of Eternity before Raven enters. So, we can assume he’s there to stop her, but therein lies the problem. When Shazam was sent into the rock, she overtook him. What makes the Wizard think that Black Adam will do any better? We needed one more issue—one with an ending. But this is week eight of Future State, the last one, and we need to return to Gotham one more time. 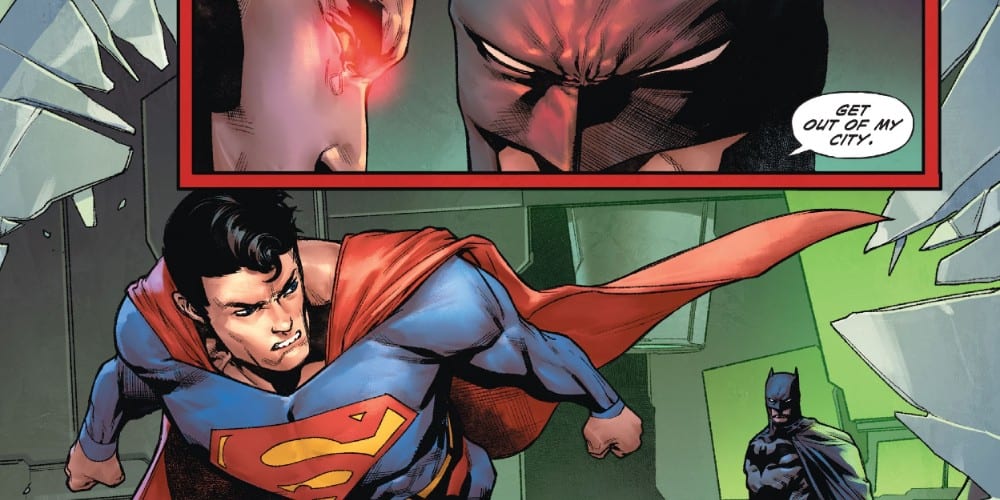 Despite their many fights over the years, Batman and Superman are traditionally excellent friends. So, what would make that friendship come to an end? Who would have to go too far, or change too much, for the “World’s Finest” to stop being fine with each other? In this last Gotham story in Future State week eight, we find out. But it all comes down to one thing: Trust.

When Mister Frog and Professor Pyg capture Superman, they experiment with his DNA, making grotesque creatures like pigeons and rats with Clark’s eyes. They would be the ultimate surveillance and security since they could also shoot lasers. How did they manage to get superman? Synthesized kryptonite. A lot of synthesized kryptonite. While Superman wants to team up with Batman to get rid of the False Face Society and the magistrate, Batman wants him nowhere near Gotham. The reason being, if they capture Clark again, which they can, they’ll create an army of Clark clones and use his DNA in other horrible ways.

Even worse, Bruce shows Clark how dangerous his DNA is. While collecting the various animals the Magistrate mutated, he harvested one of Clark’s eyes and turned it into a laser weapon. Superman finally leaves angry but says he’s only doing so because he trusts Bruce. If Bruce trusts Clark is unclear. But honestly, does Bruce Wayne trust anyone?

Sadly, we know the ramifications Bruce faces when he tries to take on the magistrate alone. Gotham City needs a Batman, but it also needed a Superman.

Well, this is almost the end of the road. We still have the other DC Future State week eight titles to look at, outside of Gotham. And then there are the two epilogues. Here’s a checklist of everything we’ve covered so far and yet to cover.