When Brian Michael Bendis wrote for Marvel Comics, he wrote the majority of major events. Avengers: Disassembled, House of M, Secret Invasion, Siege, Avengers Vs. X-Men (co-writer), Age of Ultron, X-Men: Battle of the Atom (co-writer), The Trial of Jean Grey, The Black Vortex, and Civil War II shaped the Marvel Universe for nearly two decades. But his most celebrated Marvel work was one of his earliest: Daredevil, with artist Alex Maleev. When Bendis went to DC Comics to write Superman, it didn’t feel like he was a part of DC yet. There needed to be something to solidify his place at DC. That’s what Event Leviathan does. Bendis and Maleev work so well together that even though Event Leviathan has some problems, it’s still a great experience.

What is Event Leviathan About? 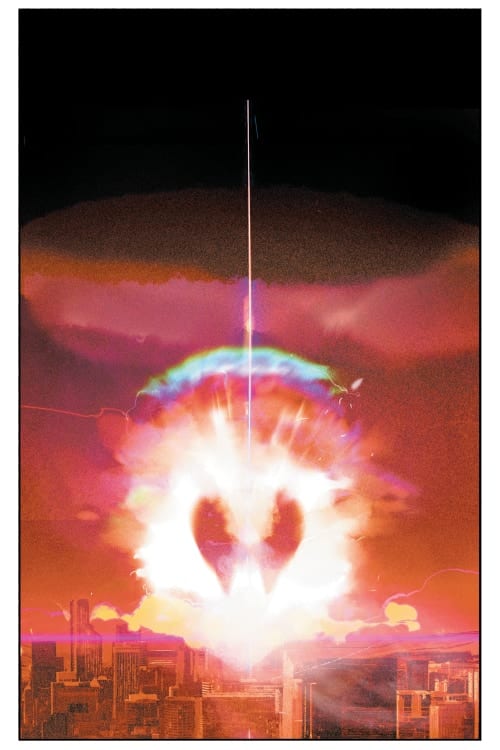 Since he began his Superman run, Bendis started building his Leviathan story. Luckily, you don’t need to read any of that to understand what’s going on. What helps is the multi-author, multi-artist one-shot Superman: Leviathan Rising, included in the trade. The main plot involves a power struggle between Leviathan and Tahlia Al Ghul. Tahlia kidnaps Clark Kent in an attempt to get…Superman. Yep. Clark lets himself be kidnapped, but doesn’t expect the kryptonite vest as a trap for Superman. Clark isn’t exactly known as the smartest superhero. Leviathan sets Clark free, and removes Tahlia from power.

Once Leviathan takes control, they get moving. Bendis and Maleev start Event Leviathan in the aftermath of Leviathan bombing the new ARGUS building. Superman is off-planet when the story begins. Amanda Waller is on the run. And in one night, Leviathan takes down every single spy agency—good or evil. After finding Steve Trevor alive in the wreckage, left as a patsy, Batman and Lois Lane realize that they have until morning to figure out who Leviathan is and stop them. If not, Leviathan will release every single secret in the world.  From the secret identities of superheroes to your password for Etsy. At the same time. So, yeah, they kind of need to move quickly. 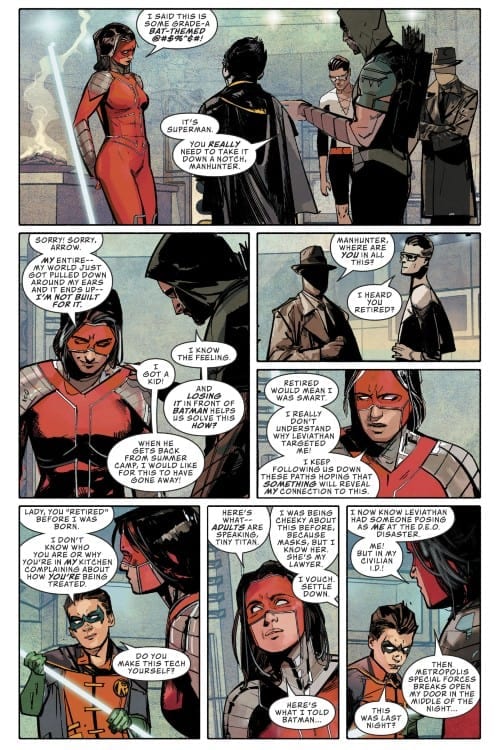 This is an actual page. Superheroes discussing a case…eating cookies. I love it. (Image: Event Leviathan #4, by Bendis and Maleev, DC Comics)

Most big comic events have more action than talking. They start with a bang and end with a bang. Event Leviathan is not that. There is action throughout the comic, sure, but it’s mostly people talking and arguing. Bendis and Maleev start Event Leviathan with a literal bang and end it with a literal whimper. Sure, that doesn’t sound like a fun event, and considering the 3.15 Goodreads average, most readers agree. It’s not an unfair assessment, but it’s a little too harsh. Bendis and Maleev tried something very different with Event Leviathan—creating a procedural noir for Superman. And in that regard? It works pretty well.

With major events, you can point to either a team or a character and say it’s a event. Blackest Night was a Green Lantern event. War of the Realms was a Thor event. And so on. Event Leviathan isn’t a Batman or Superman or Justice League event. It’s a Lois Lane event. Throughout Event Leviathan, Alex and Maleev make sure that Lois is always the smartest person in the room. She puts together the team of detectives, including Batman, Robin, Green Arrow, Batgirl, Plastic Man, The Question (Vic Sage), and Manhunter (Kate Spencer). Sometimes she’s sitting in the corner, observing. Sometimes she’s in the thick of it despite the immediate physical danger. 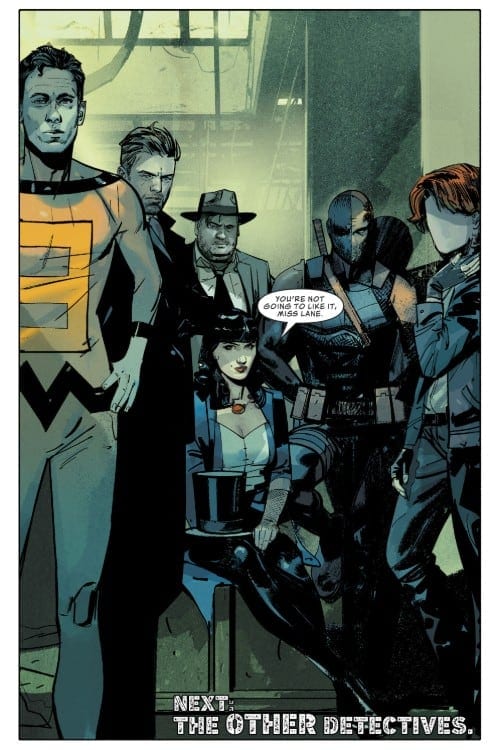 But there’s one moment where Bendis and Maleev reveal Lois Lane as the center of Event Leviathan. Lois Lane put together the team of detectives above. You might have noticed some pretty great DC Universe detectives are missing from that list. That’s because Lois put together two teams. Each is working independently of the other. The second team includes Zatanna, John Constantine, Elongated Man, The Question (Renee Montoya), Deathstroke, and Detective Harvey Bullock. And as each group thinks they are closing in on whom Leviathan is, Lois uses the information from both to get closer to the truth.

And yes, there’s a bit of a battle at the end, but none of the heavy hitters defeat Leviathan—Lois does. As one of the shadowy figures in Superman: Leviathan Rising explains: 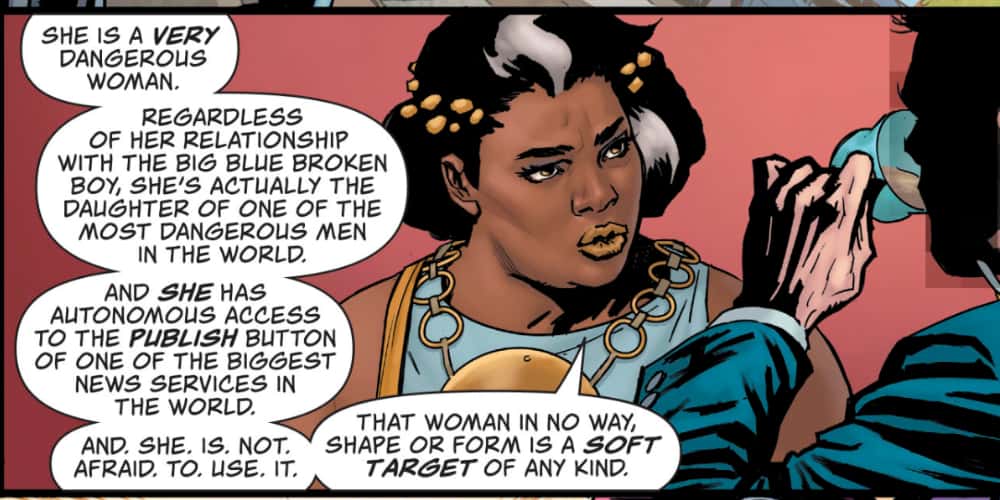 When the heroes finally discover that Leviathan is the original Manhunter, Marc Shaw, she defeats him by doing just what “Ms. Leone” warns Leviathan about. She pushes the publish button and reveals Leviathan’s identity to the world. And it breaks him. 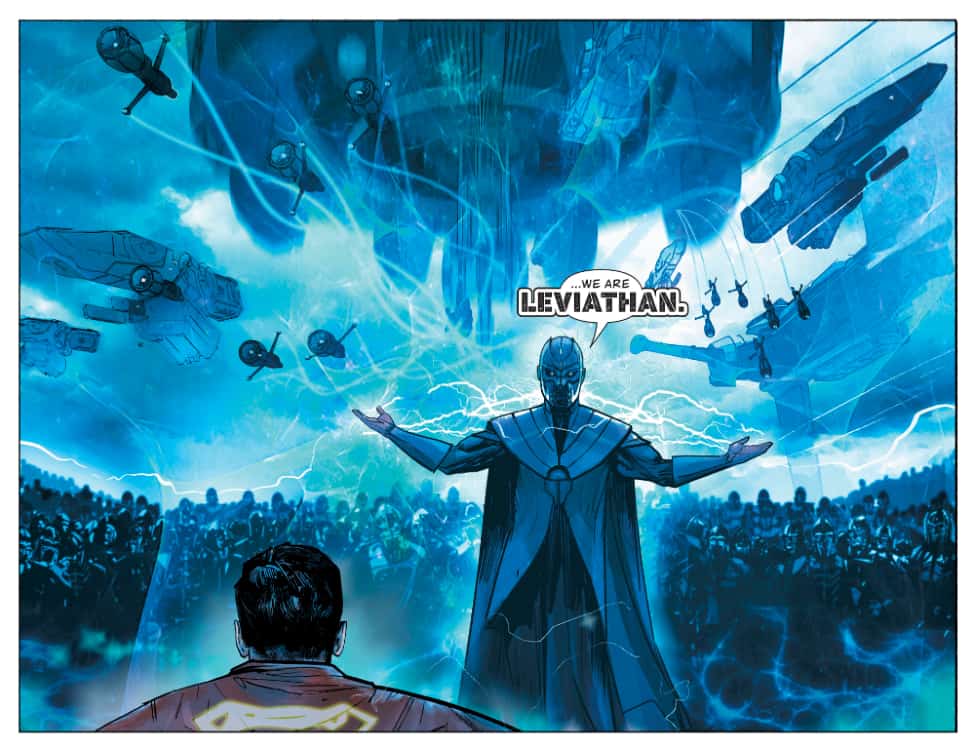 Bendis likes his characters to talk—a lot. Most of Event Leviathan is just that. A bunch of detectives arguing over clues, hunches, and leads. Without the right artist, the event would be horribly dull. Luckily, Maleev brings his crime sensibilities to Event Leviathan, bringing out the intensity Bendis laces through the dialogue. Even beyond that, Maleev’s art is just beautiful. The entire graphic novel has an atmospheric quality that makes you feel like Leviathan is closing in around you. Hopefully, we’ll see more of Bendis and Maleev after Event Leviathan.

Where Do We Go Once the Event is Over? 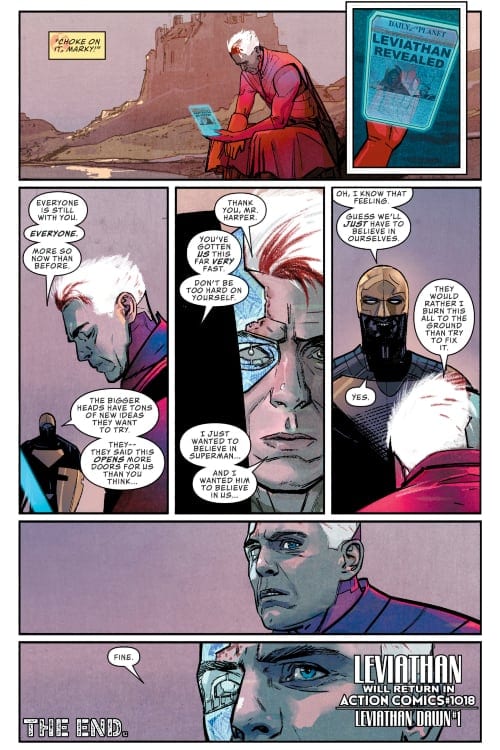 When I said the graphic novel ends in a literal whimper, I wasn’t doing the “says literal in a figurative way” thing. Mark Shaw looks down at the article on his holo-tablet thing, bemoaning that Superman doesn’t like him. And then a really obscure superhero joins him: the Golden Guardian. And as you can see in the page above, Shaw isn’t finished with his mission. Now he just wants to burn it all to the ground.

DC released the Hardcover of Event Leviathan in early April because the next chapter of the story, Event Leviathan: Checkmate, was supposed to start April 22nd, 2020. And then the Coronavirus pandemic happened. Diamond stopped delivering new comics. And DC (and all the other comic companies) had to put their line on hold. Event Leviathan: Checkmate wasn’t just a follow-up, but had Bendis and Maleev working together again. So, we’ll eventually see another 6-issue mini-series from the two masterful partnership just as soon as this pandemic ends.

Grade: You Are Leviathan!