Doctor Doom Latveria is his primary concern, even above himself.

Doctor Victor Von Doom, the ruler of the fictional country Latveria, might have the biggest ego in comics. It’s a toss-up between him and Lex Luthor, really. And as one of the biggest villains in Marvel Comics, Doom has caused mayhem and death all over the universe. So, how is it possible that he not only rules a small country, but that the people there like him? That’s what Christopher Cantwell’s Doctor Doom #1 answers: Latveria loves Doctor Doom because he loves them. 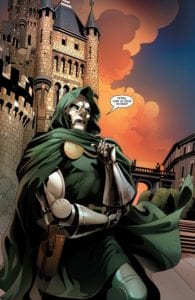 Early on, we see Doom talking to one of his assistants, Petra. And yes, he asks how her father is.  He talks about Petra’s father’s battle with Cancer—and calls him by his name, Boris. They also talk about the future of the world and her children’s place in it. During the issue, there is a controversy over a new moon base that will use a small black hole to dispose of CO2 waste in the Earth’s atmosphere. Doom believes that the base is a danger to the world (mainly because he didn’t help build it). With Petra, they watch a flare burst from the moon as the base turns on. Considering Doom is Doom, she agrees with him…and Doom says, for her children, he hopes she (and by extension himself) is wrong. At first, this seems like Doctor Doom just kind of placating a citizen of Latveria, but there is more to this.

That moon base? Yeah, it’s attacked, and Doom is framed for the bombing. Now, instead of going “I am Doctor Doom, how dare they insult my intelligence!” or something similar, he immediately starts defending Latveria, by any means necessary, and how far he is willing to go to keep Latveria safe is pretty shocking: 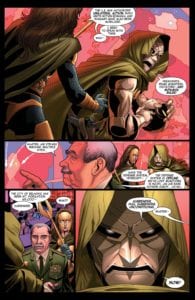 Doom surrenders. He hands the kingdom to his right-hand ruler, Zora, and goes to surrender. Sure, he beats the crap out of Union Jack first, but when he realizes that the only way to keep his people safe is by turning himself over, he doesn’t hesitate. Of course, he’ll argue that he was set up, and it does seem like he was, but this is the only way to prevent an attack on his country.

Just Because He Cares, Doesn’t Mean He’s Not Doom

Early in the comic, a news anchor mocks him. Well, then this happens: 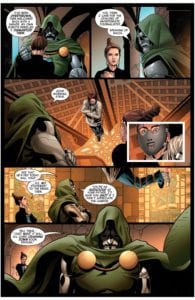 I’m on Doom’s side with this one. (Image: Doctor Doom #1, Marvel Comics)

Yes, he may be the hero of the series, but he’s still the same Doctor Doom we love.

So, do you think Doctor Doom is a real hero to Latveria, or is he using them for other means? Any other new Marvel Comics you’re looking forward to reading?