Death of Doctor Strange Preceding "In the Multiverse of Madness" 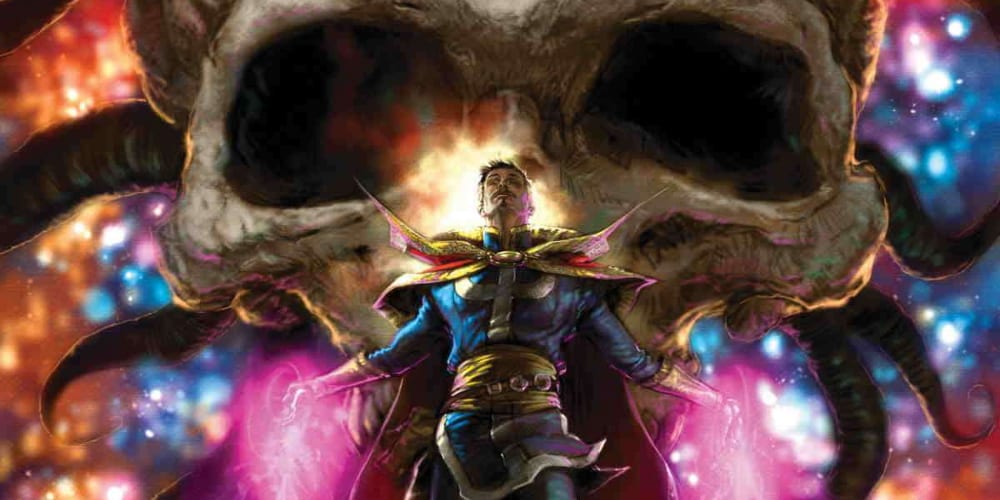 Starting in September and ending in January, Marvel is releasing the mini-series The Death of Doctor Strange. Yet the next Doctor Strange movie, In The Multiverse of Madness, premiers only two months after the series’ conclusion. Of course, since this is a superhero comic, we know that the death won’t last. But it does seem, um, strange, that Marvel would kill a character about to star in a major blockbuster. So, what is this min-series about (besides death, of course), and will the film dictate the return of Doctor Strange? Let’s take a look. 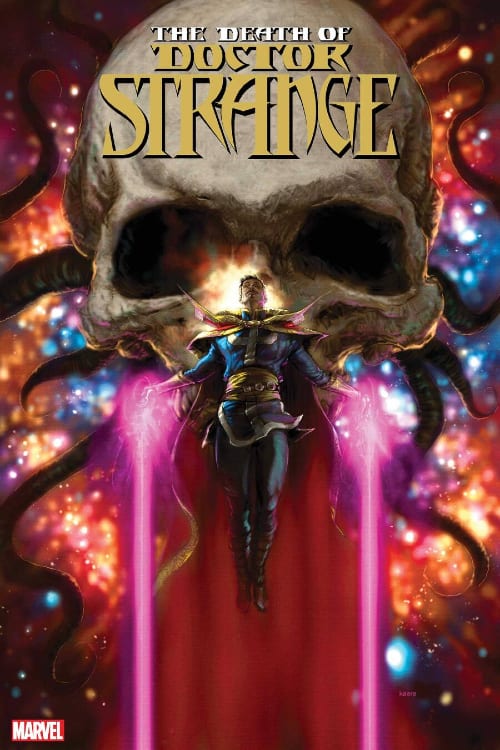 Since 1963, Doctor Strange protected the Marvel Universe from all magical threats. Well, almost all of them. But as the Sorcerer Supreme, he is the best equipped to fight the monsters and malevolent villains from other dimensions. However, Marvel has explored the Marvel Universe without Strange as Sorcerer Supreme (more on that later). Yet he was still there to fight demons and witches and creepy things nonetheless. But what about dead? As Marvel describes in their announcement:

“When Doctor Strange unexpectedly dies, who is left to protect Earth and keep the mystical evils at bay? And most importantly…who killed Stephen Strange? If he couldn’t stop them, who can? This rousing journey will dive into the mythos behind Doctor Strange, showcasing his unique—and vital—position amongst Marvel’s heroes and ultimately transform the future.”

Prepare For an Epic!

A mystical murder mystery? That will definitely be fun to read. As well, writer Jed Mackay and artist Lee Garbett promise something quite epic. “What happens to the world if Doctor Strange isn’t in it?” MacKay said in the announcement. “Strange has been a Marvel fixture from the early days, but now, his time has run out, and as a Strange fan, it’s been my bittersweet privilege to shepherd him through his last day and the effects that snowball out of it. We’ve cooked up a whale of a story to send Strange off with, and I can’t wait for people to join us on it!”

For Garbett, this project is a dream come true. “Doctor Strange has long been top of my ‘most coveted character’ list. To finally get a chance to draw him in such a momentous series is…well, magic,” Garbett said.

But with Multiverse of Madness just two months after the conclusion, how long can we really expect Strange to stay dead?

There’s No Reason to Assume Multiverse of Madness Will Influence The Death of Doctor Strange. 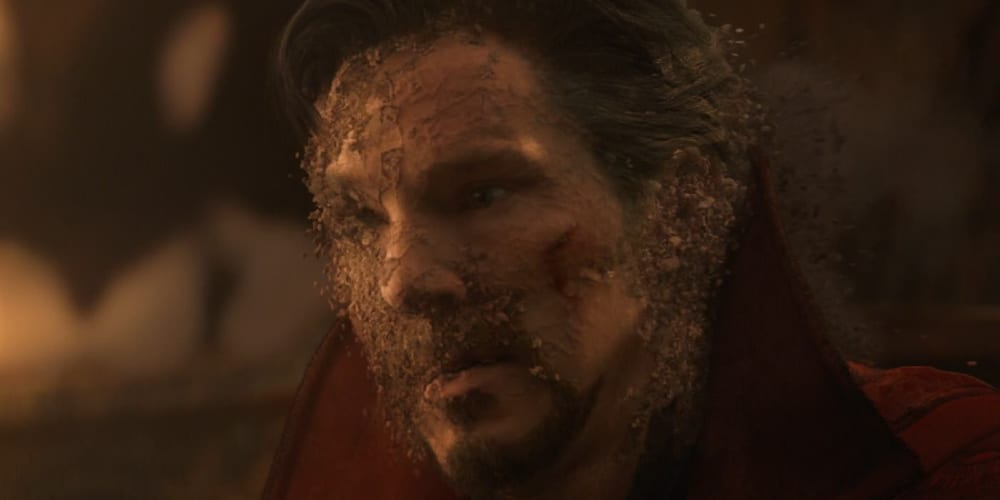 Sure, it seems convenient that a big Doctor Strange movie comes out so close to the mini-series, but that might be more accidental than on purpose. Let’s remember, we were already supposed to have already seen the next movie. Doctor Strange In the Multiverse of Madness’s original release date was May 7, 2021. By now, we would have reviewed it, did a podcast, a few deep dives, and be ready for the next MCU film. On the other hand, we have no idea how long Marvel Comics had plans for The Death of Doctor Strange. It could be a happy coincidence, could be on purpose. Who knows? But we can look at other “deaths” to determine if the movies really do influence the comics.

The Highly Profitable Character Who Stayed Dead for Four Years 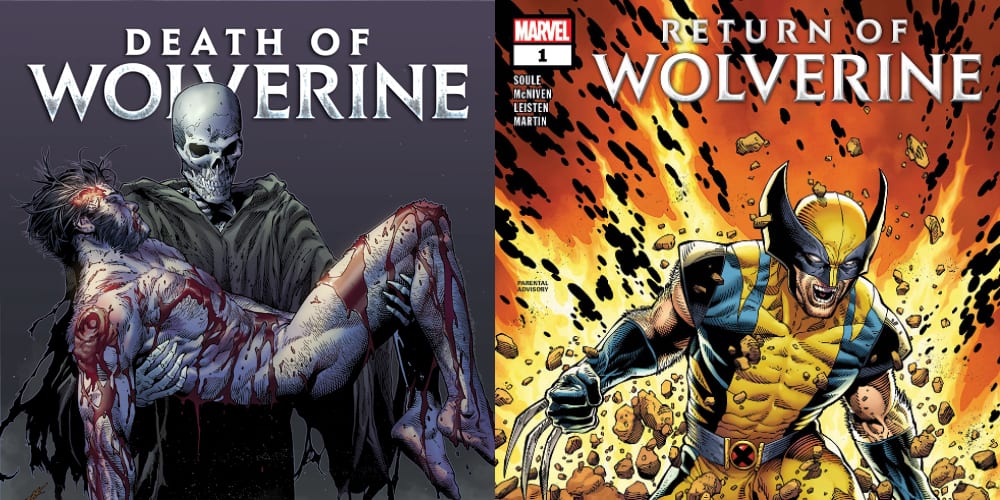 The best example to look to for The Death of Doctor Strange and the MCU movie’s relationship is Wolverine. The Death and Return of Wolverine don’t coincide with his movies at all. On the movie end, Origins released in 2009, The Wolverine in 2013, Days of Future Past in 2014, and Logan in 2017. We’re not going to count his Apocalypse cameo. But for the comics? Death of Wolverine debuted on September 3, 2014, several months after Days of Future Past. And The Return of Wolverine debuted on September 19, 2018. Those dates don’t indicate a relation to the movies. Nor does the Disney acquisition of Fox (March 20, 2019). Wolverine stayed dead (except for the alternate reality versions and his clone/daughter taking up his mantle) for four years! 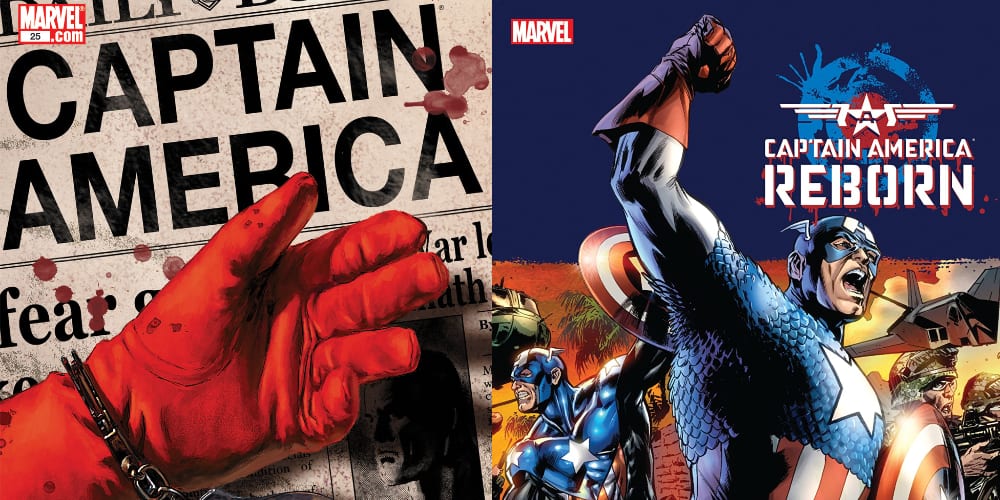 When Captain America died in Captain America (2004) #25, March 7, 2007, we did not yet know that he would be in a movie in 2011. This was a year before Iron Man launched the MCU. However, once Nick Fury said those iconic words, “I’m here to talk to you about the Avengers Initiative,” fans started speculating how the movies would impact the comics. Everyone assumed that Marvel was planning Captain America to return to comics in July 2011, alongside his movie debut.

Yeah, that didn’t happen. Captain America: Reborn debuted on June 11, 2009, only slightly more than two years after his death and two years before his movie came out. We didn’t even get the month right. The films and the comics just don’t dictate as much as some would believe. So, when it comes to The Death of Doctor Strange, we shouldn’t assume In the Multiverse of Madness will influence the comics.

Except there is one little conceit for this pairing. Not Doctor Strange, but The Scarlet Witch.

Marvel Comics Could Be Using The Death of Doctor Strange and In the Multiverse of Madness to Boost Wanda Maximoff (Like she needs it!) 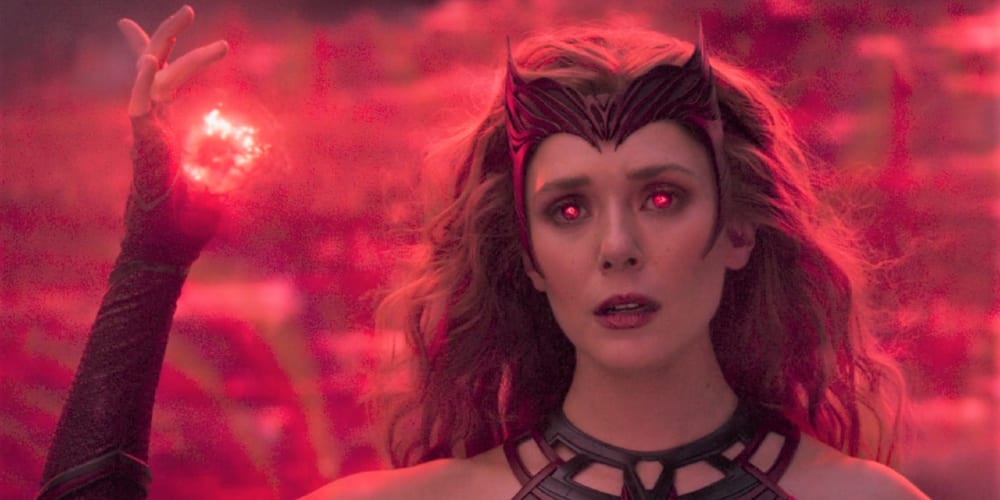 Though we almost saw Doctor Strange in the WandaVision finale, the producers made the smart choice to let the ending focus on the heroine of the series. Besides, we’ll see Benedict Cumberbatch in Spider-Man: No Way Home this December. However, even if Strange didn’t appear in the Disney+ series, Wanda will have a key role in his next movie. But what’s most important to remember? WandaVision made Scarlet Witch a household name, and people want more.

So now we have The Death of Doctor Strange ending just before the movie premiers (finally). What happens to the Marvel Universe is definitely one question, as Mackay indicated. The other is even bigger: who will be the next Sorcerer Supreme? In the past, we’ve seen Brother Voodoo take the title (he was one of the best), Illyana  Rasputin – though only in Limbo – and even Loki! If Marvel is purposely releasing The Death of Doctor Strange with In the Multiverse of Madness, it’s probably for one big reason:

Scarlet Witch will be the next Sorcerer Supreme. Well, at least in the comics (maybe the movies too!). And only for a few years, most likely. But it will still be awesome to see!

Another theory: Wong should be the next Sorcerer Supreme, but he most likely won’t. Why? He is the murderer in The Death of Doctor Strange! (I’m going to be wrong on this one.)