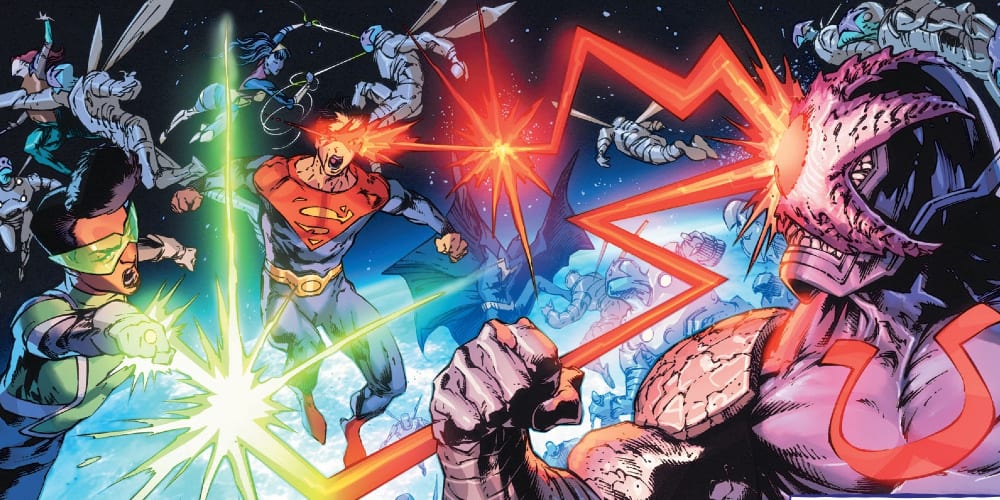 While the Gotham side of Future State is going strong, the same can’t be said for the rest of DC, and that’s much more apparent in week two than in week one. There are some stories here that were incredible, some of the best of the event so far. And some make last week’s Flash look like Saga. There were also two anthology books, so DC Future State Week Two was a bit big…and upcoming weeks are even bigger, so let’s get started. 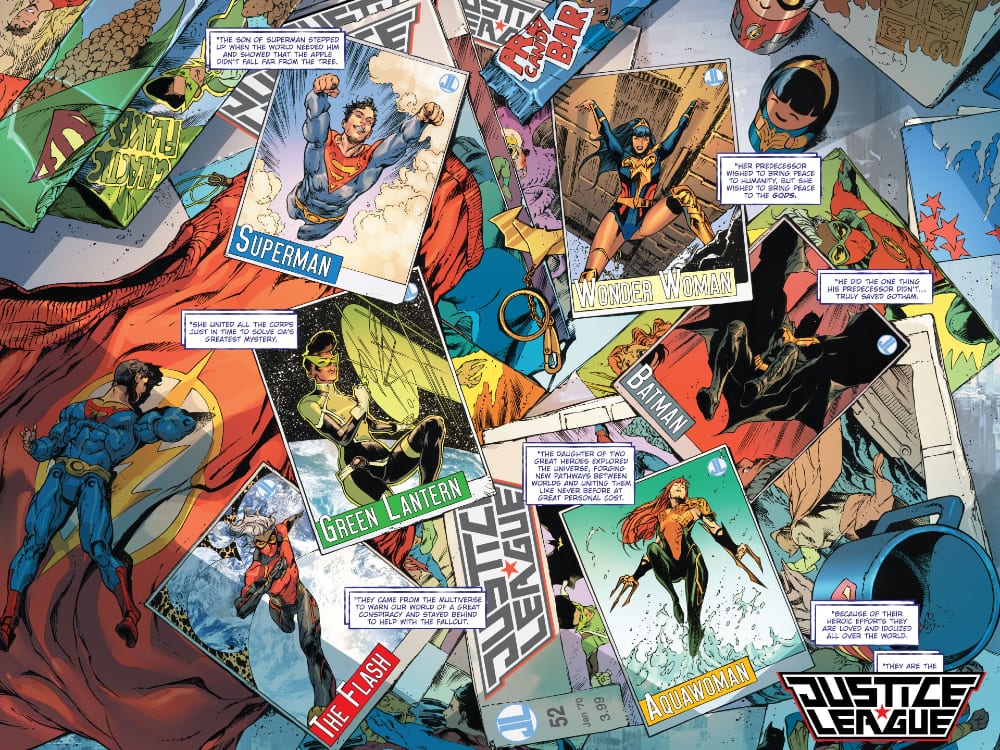 The new Justice League is better than any Justice League before it. I know that will rile up some fans, but Yara? Better Wonder Woman. Tim Fox? Better Batman. Jon Kent? Better Superman. Sojourner? Better Green Lantern. And already, the new Aquawoman and Flash are more interesting than their predecessors. But if you’re saying “not my Justice League,” well, Williamson already saw it coming: 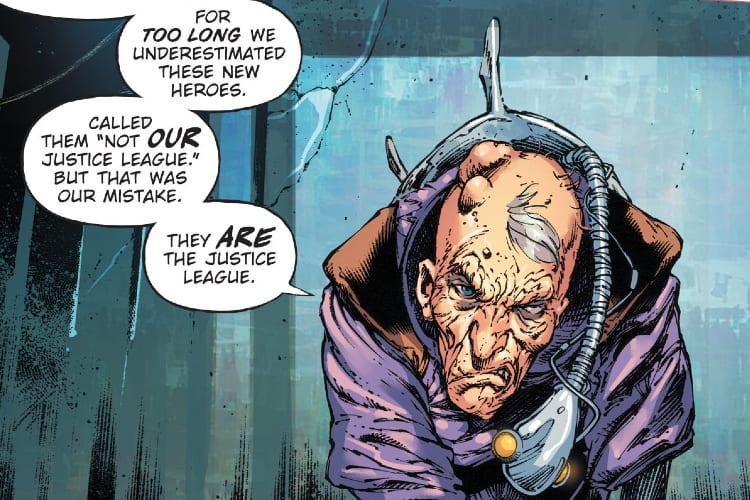 But just like TO Morrow up there, anyone who doesn’t like this team is underestimating them. Because the clues we got from this comic are plenty. 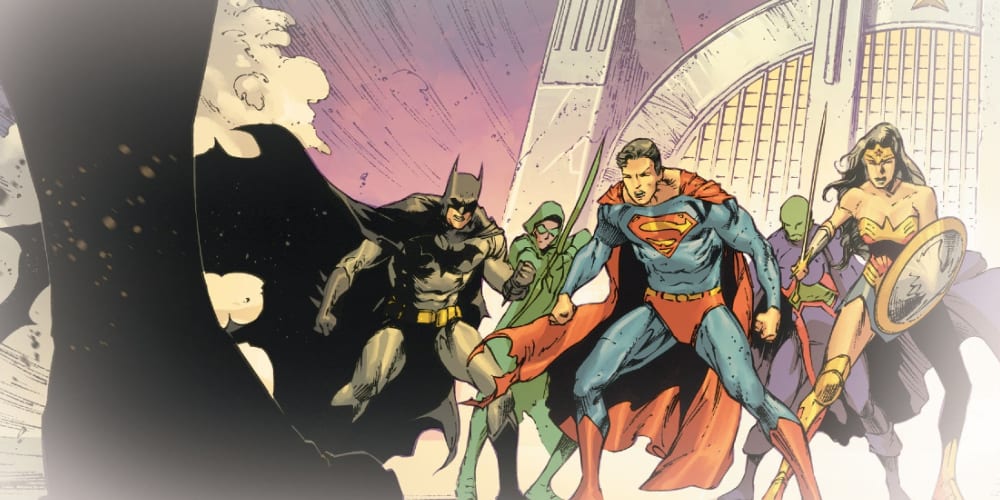 There’s a game I’m addicted to right now called Outer Wilds. It’s an open-world game where you piece together a mystery based on space, not time. You find bits here and there and slowly figure out what happens, when, and how. That’s what Future State feels like. In one issue, we’re wondering why Nightwing is in Arkham Asylum. But in another issue, we see him after he gets out, bit how it changed him. However, we’re still waiting on what takes place in the middle. We get answers that only create more questions like Lost.

So what did we learn in DC Future State Week Two? Or at least, in Justice League?

So yes, there’s a lot here. But it never gets in the way of a good story. Whether it’s seeing the friendship between Yara and Jon, the flirtation between Aquawoman and Flash, or the isolation—yet kinship—between Tim and Sojourner, we learn a lot about this team. And since some White Martians imprisoned them in some hellish reality, we’re just going to see them get close. 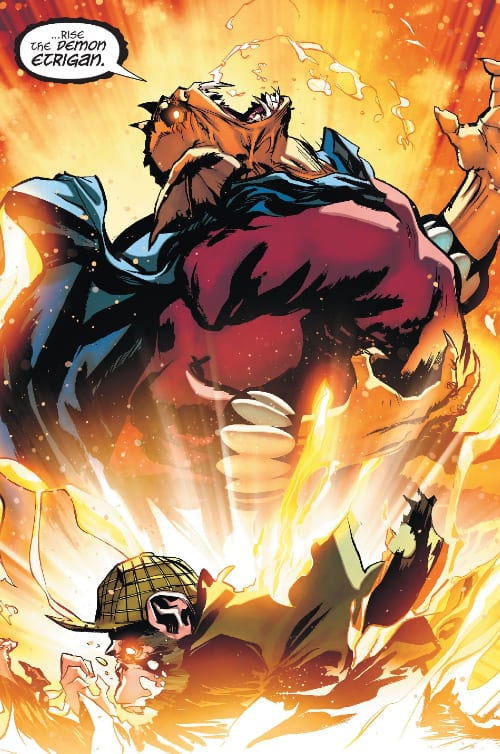 This is my favorite thing ever. (Images: Future State: Justice League #1, DC Comics)

While the Justice League are beloved and living in a world they made safe, the Justice League Dark team find themselves in a much different situation. Now, is it further in the future or before the new Justice League forms? Who knows. We know that Bobo, the detective chimpanzee, is now the host of Etrigan the Demon! That should tell you how dark the world’s become. Also, Merlin is an evil fascist wizard taking the magic away from every sorcerer with his enforcers that make the Magistrate look like Habitat for Humanity volunteers. It’s a great start, and it will be fun to see where this creative team takes us.

One of the three Future State: Green Lantern #1 Stories Was Good. The Other Two, Meh

There are Green Lantern characters I like, but they aren’t exactly my favorite franchise. Still, this anthology-sized comic focused on two of my favorites, John Stewart and Jessica Cruz. It also featured Guy Gardner, who I don’t love, but don’t hate either. But the quality is all over the place. So, let’s break it down. 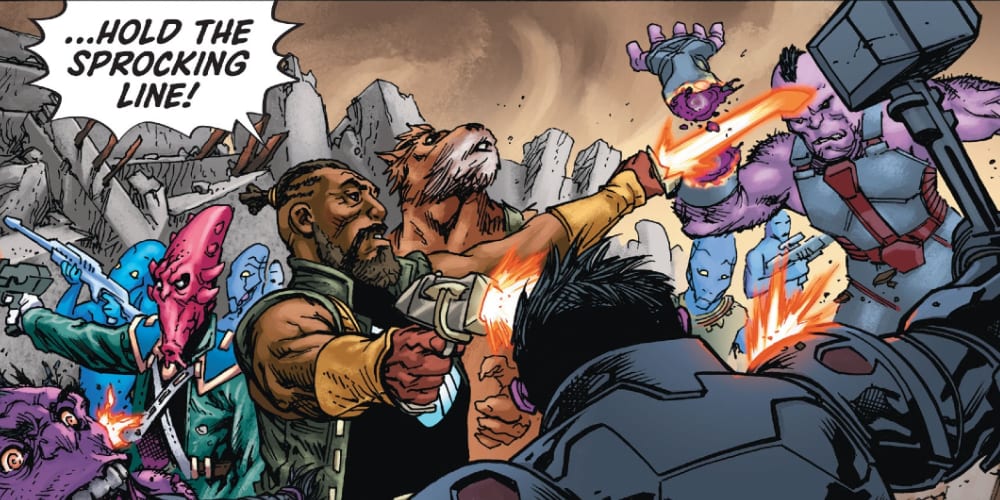 Ever wonder what Neil DeGrasse Tyson would look like as a space warrior? No? I’m the only one? Well, it would be this. (Image: Future State: Green Lantern #1, DC Comics)

This probably takes place before Future State: Justice League #1. In fact, all three of these stories probably do. If they come after, something terrible happens to Sojourner, and I refuse to accept that. But where they stand now, the Green Lanterns are gone. Their rings are all dead, and their powers are gone. But does that mean they stopped kicking ass?

Nope. Enter Jon Stewart, former host of the Daily Show. Wait, wrong one. John Stewart, former Green Lantern and current general of an army of former Lanterns. This story is all action, but it’s a good story. We learn a lot while they fight hordes of enemies led by the “God in Red.” Who is that? Not yet sure. The most obvious guess would be Atrocitus, the Red Lantern leader, but he doesn’t quite look the same. But he kind of looks like NO! We’ll save that for when they reveal who it is because if it is this Lantern, it would be too tragic.

Sadly, this is not one of the better stories in DC Future State week two. Scratch that. It’s a good story, but the art is terrible. Everything looks awkward and ill-defined. Sure, there are some great images, but for the most part, it feels off. Maybe it’s the pencils and the colors combined, but the art didn’t work well. 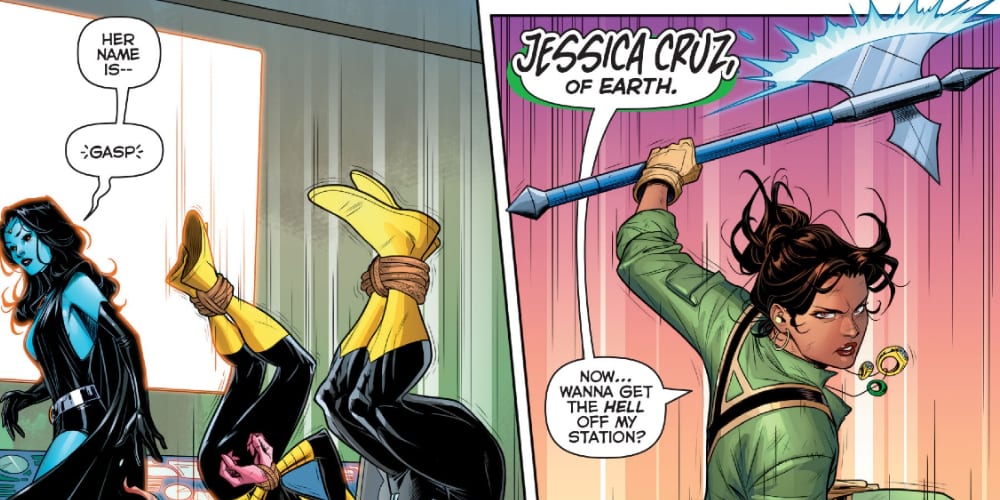 Oh, if only she were single. And real. (Image: Future State: Green Lantern #1, DC Comics)

Jessica Cruz suffers from severe anxiety, but this had only made her a better Green Lantern. Yet now her ring is dead, and she’s stuck, alone, on a Green Lantern space station. So, how’s she holding up? Like a BAMF. She’s completely on her own and powerless when three Yellow Lanterns—who have taken the place of the Green Lanterns policing the universe—board her ship. She kills two of them and beats the crap out of one of Sinestro’s lieutenants. In fact, she strikes so much fear in Lyssa Dark, “keeper of the book of Parallax,” that the yellow ring chooses her as a host. The warrior suffering from anxiety—a paralyzing mental health condition based on fear—didn’t just master fear. She became fear. I can’t wait to read more about her. She can be the first superhero yellow lantern.

Wait…it says “the end.” Why? Week Two can’t be the end of Jessica Cruz’s DC Future State saga. This should be the beginning. It was one of the best stories yet. I want to see more of this yellow lantern!

Guy Gardner in “The Book of Guy” 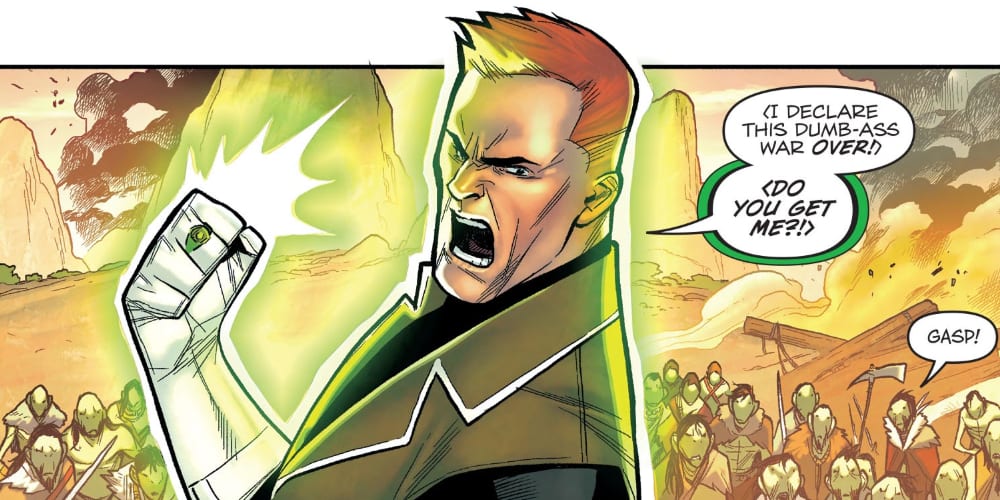 Oh, if only he were single. And real. (Image: Future State: Green Lantern #1, DC Comics)

This story should have been fun. Guy Gardner is settling a potential religious was between two primitive cultures when his ring dies, leaving him stuck on this planet. He quickly becomes their prophet and king. And if the story were four or five pages, it would have worked. But it just went on and on and on. It got to the point where it felt like something major had to happen because the joke got old several pages before. But it never does. Despite the fun art, the writing is just needlessly long and boring. 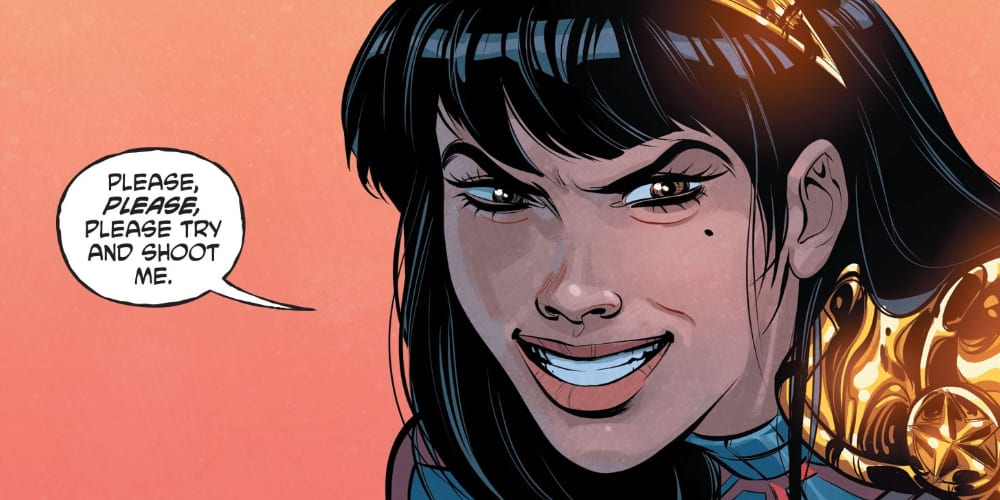 I was really looking forward to this title. The new Wonder Woman, Yara, is, well, wonderful. Likewise, Jonathan Kent is a great Superman. The comic starts well enough. Leila Del Duca and Nick Filardi’s art and colors are splendid. But the plot and story are meh. First, Wonder Woman, though still fun, doesn’t have much to do. In fact, Superman doesn’t have a lot to do either. It’s more about the Brazilian sun god going up against the villain Solaris, a sentient sun who hates Superman.

However, there were nice touches. For instance, I love how Superman uses his heat vision to say Hello to Metropolis every morning. And there was another throwaway statement that is actually a big clue: Midnighter operates the Watchtower. It is also interesting that Superman has somehow created a shaky Utopia, but the rich and powerful can easily manipulate—which Wonder Woman fights against.

That is a good story, but it’s not the story. Maybe it will be in future issues? 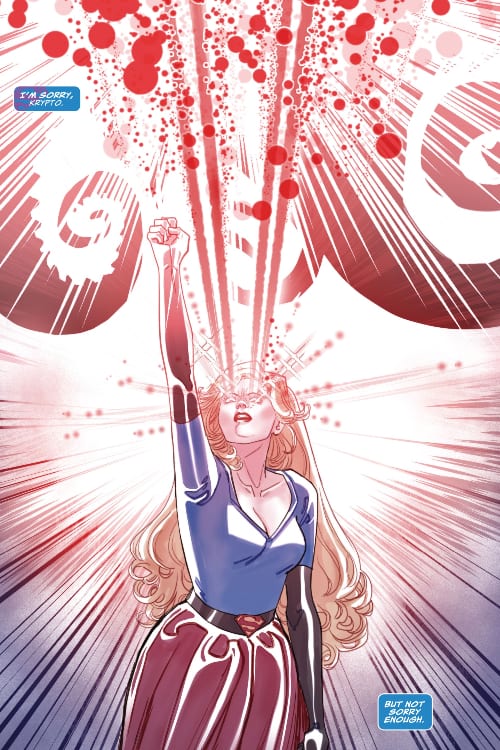 Two Marguerites for the price of one! And two great comic creators too. At least, in my opinion. However, looking around the internet (mostly Goodreads), this comic has big fans and big haters. I’m a fan, obviously. Presently, this comic is one of the most unique that we’ve seen in DC Future State Week One or Week Two. Part of that uniqueness comes, particularly, from Savage’s beautiful watercolor-style artwork. Not only is it just great art, but it fits the world that Bennett creates.

And indeed, that world is beautiful too. We’re on a moon colony of all the displaced people of the universe, all the misfits and outcasts. Basically, my lunch table in high school. And it’s here that, after so many years, Kara feels at peace. She was once so full of rage that she became a Red Lantern.

Here, she fights only when she needs to, and she is much more focused on helping the people of her colony. When a superpowered child crash lands through the dome, she takes on the role she was always meant to have: mentor. That’s what she was supposed to be for Clark Kent, but he ended up landing several years before her arrival. When a race of aliens shows up to kill said pupil? Certainly, that might be a good reason to burn off some rage.

Before and After DC Future State Week Two 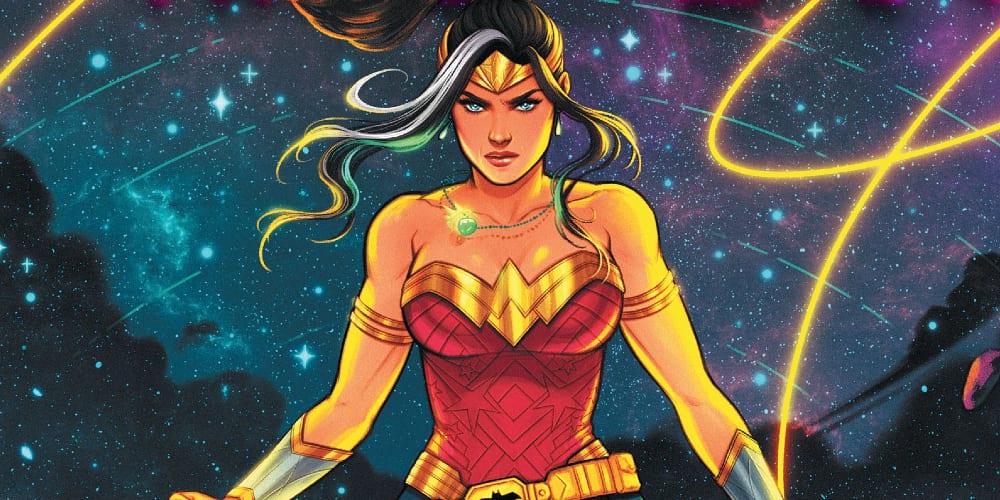 So, with week two finished, what do you think of DC Future State so far? Personally, I’m more intrigued than I thought I would be, but that makes the duds a little more painful. Thankfully, we still have a lot coming up.