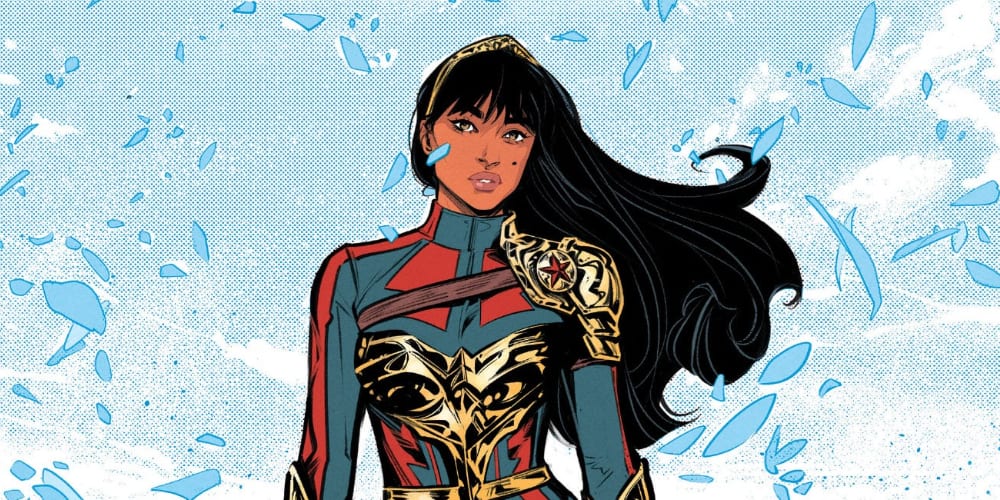 This event is getting a bit overwhelming (as you can probably tell by this post’s lateness). We’re looking at DC Future State week five, which features a decent amount of stories. However, though it’s not always easy to keep up with all issues of a big event, the individual stories are, for the most part, great. Sure, the Gotham stories might have a better track record, but the rest of the event holds up too. So, let’s take a look at what week five of DC Future State had to offer. 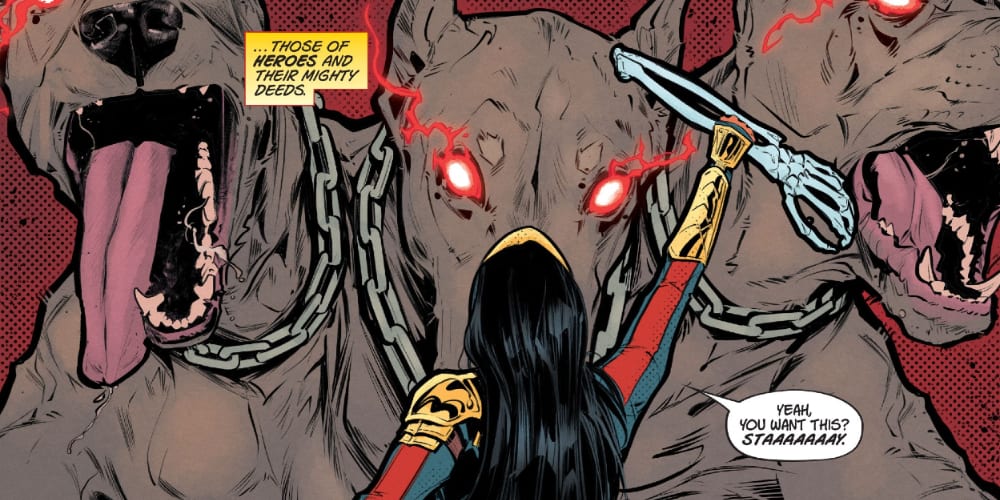 Of all the new characters introduced in DC Future State, week five proves that Yara Flor might be the best one. Sorry, Tim Fox, you’re a great Batman, but Yara’s edged you out. And you technically aren’t a new character, so there’s that too. Altogether, Jones writes the perfect strong female character. Yes, she’s tough and witty, but she shows a lot more vulnerability in this issue than she did the last. She’s going to Hades to free a woman she once loved, risks be damned.

Sadly, it doesn’t work. Jones harkens back to the myth of Euridice and Orpheus. In the Greek myth, Persephone convinces Hades to let Orpheus take Euridice out of the underworld. However, Hades gives them a condition. Orpheus cannot look back to see if Euridice is still following. Of course, he gets all the way to the exit of the Underworld—and looks back, damning his love back to Hades. 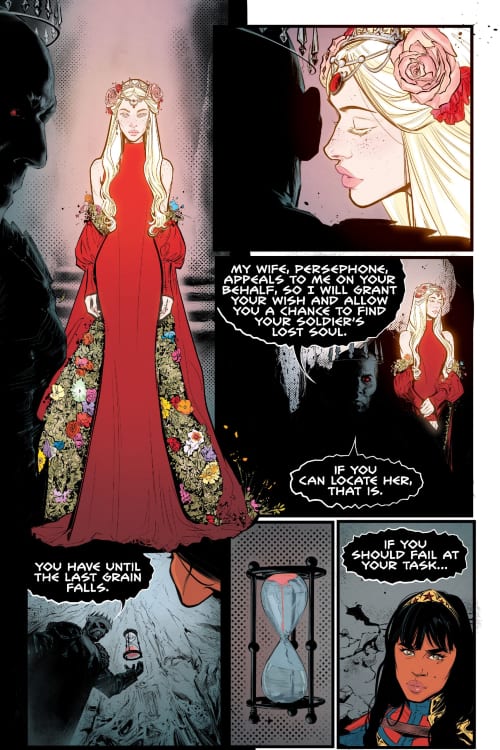 In Wonder Woman, Persephone once again convinces Hades to let the two lovers leave, but Hades has conditions. But first, Yara has to find Potira. If she can’t, then she forfeits her soul. Once she finds her, they both need to escape the Underworld. So, of course, Hades makes that Impossible, making the walls cave in and trap Potira. Yara tries to pull her free as freaky underworld spiders descend on them, but she can’t—and even if she might have, a host of Amazonian warriors pull her out of the cave.

But as lovely as the story is, the art is even more incredible. Jones has like eighty styles in this one comic, depending on the situation, character, and scene. Her portrayal of Persephone (shone above) is the most beautiful I’ve seen on paper. Hell (or Hades), one of the most beautiful, period, second only to Broadway singer Amber Gray’s portrayal in the musical Hadestown. I wish I could show every page on here, but I’m guessing DC wouldn’t be okay with that, so I’ll leave with just this one, a flashback scene unlike any I’ve seen in comics:

DC Future State: Wonder Woman #2 brought tragedy to week five of the event. Will there be more? Surely, they wouldn’t load us up with that much depression. 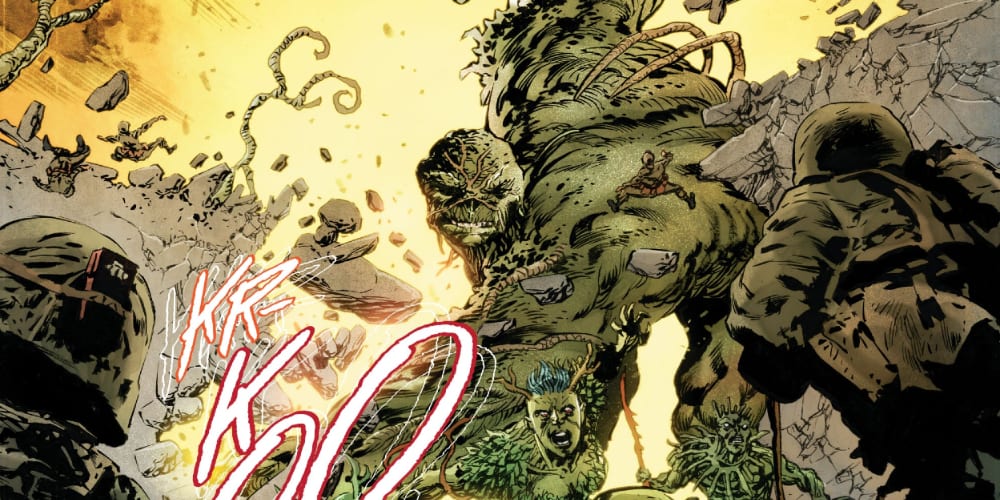 Like Future State: Wonder Woman #2, Swamp Thing #2 also brings some impressive artwork to week five of the DC event. Though it sometimes looks a little muddy, that actually helps accents the Swamp Body diagram pieces, like the one above, and this perfect page below: 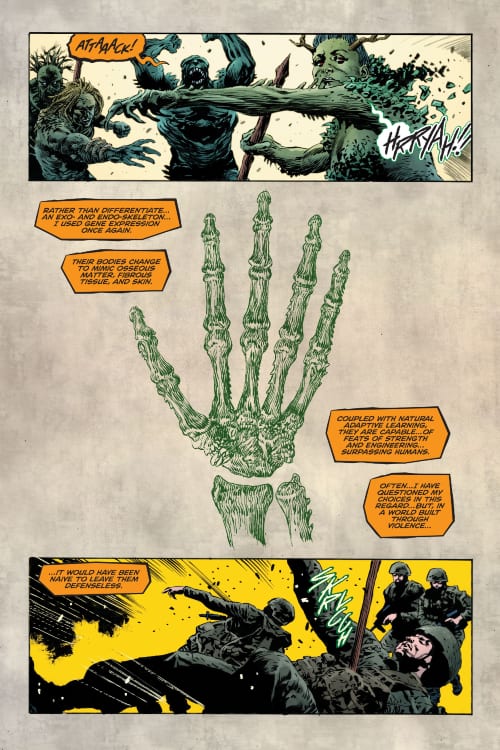 But these diagrams aren’t there just for the awesome sauce they provide the delicious Beyond Beef balls of Ram V’s story, they’re essential. Perkins’ textbook-like pages are rigid compared to the narrative. Indeed, one might say soulless—and that’s the point. Swamp Thing created life, and he wondered if they truly had souls. They had the freedom to think for themselves, but does that mean they have a soul? Swamp Thing decides that they don’t. They will never change from what he made, and even their personalities are just extensions of his own psyche. But the humans, they are everchanging. Swamp Thing also realizes that this is why the green always chose a human soul for its avatar. And as a reader, this revelation of his, that he needs to let his creations die, is soul-crushing too.

Why Did Swamp Thing Sacrifice His Children—and Himself—for Humanity? 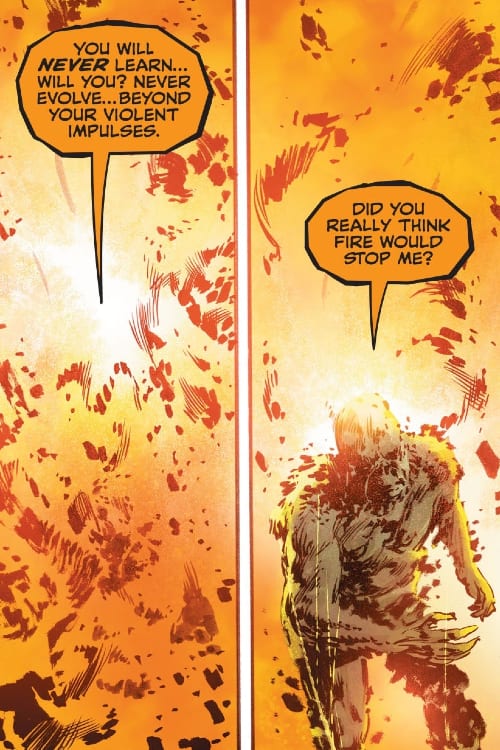 DC brings a classic villain to week five for Future State: Swamp Thing #2: Jason Woodrue, the Floronic Man. Woodrue spent years trying to manipulate the green to his advantage, but in the end, he decides he needs to “free” humanity from the Green. And yes, by “free,” he means “kill everything.” With an Ozymandias, “I hit the button 20 minutes ago,” Woodrue unleashes his doomsday device. Even more horrifying? The device uses the hero Obsidian, who uses shadows, to create a darkness around the Earth.

But for humanity to survive, they need light and food. After absorbing his children back into himself, Swamp Thing uses all of his power to create a giant tree that stretches beyond the shadow and to the sun, which he could then use to sustain the Earth. It’s a sad, beautiful ending, but one that ends on hope. But we know the Earth will bounce back thanks to other Future State titles. However, now we know the cost of the future. Well, the future is fine for a bit. The planet eventually turns into a giant rock, but so will all planets.

The Flash #2 Is Not Much Better Than the First Issue 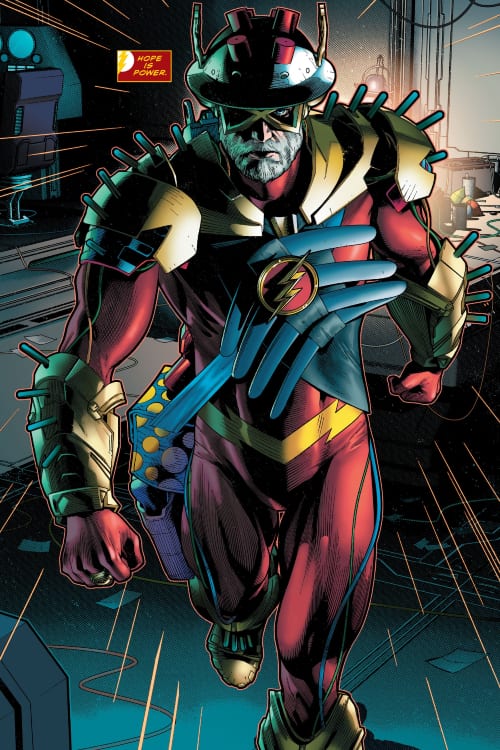 You know when a friend thinks their new outfit is awesome, but they look like a dumbass? That’s what’s happening right now, but Flash doesn’t have any friends left. (Image: DC: Future State: The Flash #2, DC Comics)

So, about midway through this issue, it felt like it might actually be a decent comic. Not only was Wally and Barry’s fight was going well, but we also saw just how far the circumstances pushed Barry. At one point, he uses the Prism goggles to cut off Wally’s legs…only to find out it was a duplicate. Barry had even given a long speech about how sorry he was before he did that.

But that happens two more times. It gets tiring really quickly. Monologue after monologue for a story that just doesn’t go anywhere. Famine/Wally vibrates Barry a second out of time so that he can watch but never help. And Famine feeds off both hope and despair, which Barry has plenty of. However, as tragic as it was, that ending didn’t have the same emotional impact as Wonder Woman #2 or Swamp Thing #2. Honestly, it just felt like “finally, it’s finished.” Oh, the story isn’t—you have to read Teen Titans to see how it all ends.

Basically, The Flash was a dud in DC Future State week one and again in week five. Seriously, there was even a moment when Barry actually says, “I will not become mired in fear that my actions will lead to some fateful future state” (emphasis added). Seriously? Awkwardly dropping the name of the event in a monologue? What is this, an early 2000s Rock movie? And when he kills his best friend and explains how, he says, somberly no less, “that’s a Flash Fact.” What? That would be like Ben Grimm beating Reed Richards to death and then, while weeping, say, “It was clobberin’ time.”

I was really hoping we’d see the new genderfluid Flash come in and save the day, but nope. So, moving on.

Our oh so handy checklist.