Dear reader: which Batman supervillain likes to wear green, enjoys puzzles, and was once played by Jim Carrey? Give up? The Riddler! Thanks to the recent The Bat and The Cat trailer for The Batman, fans got to see a little bit more of the riddle-loving antagonist. But who is this villain and what is his character’s backstory? In today’s blog post, I’m looking at: who is the Riddler and what is the history of The Riddler?

Who Is The Riddler And What Are His Powers? 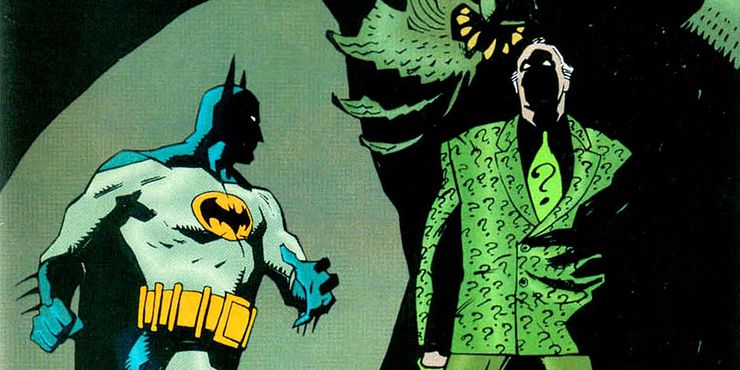 The Riddler (alias: Edward Nigma, later Edward Nygma and Edward Nashton) is one of Batman’s silliest villains, but make no mistake; the Riddler is deadly and should be taken seriously. As a boy, young Edward Nigma was fascinated with puzzles. After his teacher announces a contest where whoever solves a puzzle fastest wins a prize, Edward breaks into the school to practice the puzzle until he is able to solve it in under a minute. When he ends up winning and is given a book of riddles as a prize, he becomes enamored with the idea that cheaters always come out on top, and he embraces puzzles of all kinds. Eventually, he becomes a carnival employee who excels at cheating his customers out of their money with his bizarre puzzles and mind games. He soon seeks out bigger fish to fry, namely the Dynamic Duo of Batman and Robin. He disguises himself as the “Riddler” to challenge them, believing they are worthy adversaries. The name Edward Nigma is a pun itself (E. Nigma, or enigma, is a person or thing that is difficult to understand). His crimes are usually very attention-grabbing and flamboyant and usually depicted as less violent than other Batman villains (e.g. The Joker). He likes to wear green, usually wearing a domino mask paired with a green unitard with question mark prints, or a green suit and bowler hat. His symbol is often a black, green, or purple question mark.

The Riddler has genius-level intelligence, which is why he is obsessed with and excels at riddles, puzzles, and word games. He loves basking in his “intellectual superiority” and will often send complex clues in the forms of riddles to both Batman the Gotham City police department. He has excellent deductive and analytical skills and is a great escapologist, having been a huge fan of Harry Houdini. He carries a steel question mark shaped cane called the Riddler’s Cane that houses several devices, including holograms, a security bypass, and electrical blasts. He also has a Question Mark Grapple Gun, which shoots out grappling hook pistols. He often has puzzle-based weapons too, such as exploding jigsaw puzzle pieces and crossword puzzle throwing nets.

The History Of The Riddler 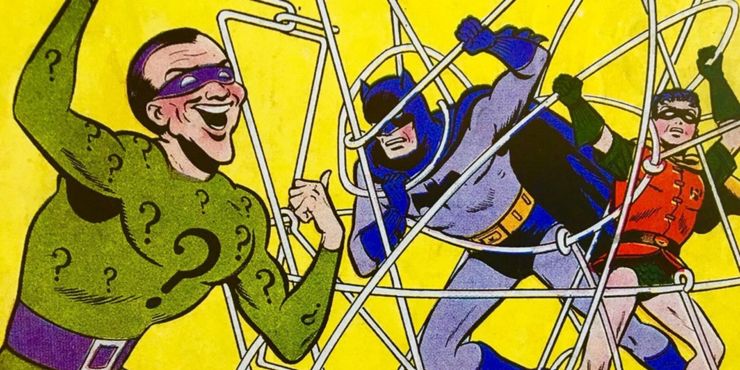 The Riddler character first appeared in Detective Comcis #140 in October 1948 and was thought up by Bill Finger and Dick Sprang. Edward Nigma was abused as a child, which led to him seeking comfort in puzzles and riddles as it gave him some control over “solving” a problem. He’s one of the most enduring enemies of Batman and has been adapted for various media including films, television series, and video games.

While the Riddler may seem silly, he can cause a lot of damage. As mentioned before, some of his crimes aren’t considered as violent as others, but it ultimately depended on the story arc and iteration of the character. For example, in Batman: Earth One, the Riddler is a serial killer that murders people whether they answer the riddles he poses or not. On the other hand, there have been a few versions of the Riddler where he tries to reform himself or turns against the other villains that are going after Batman. Even in live-action versions, Carrey’s Riddler seems far more ridiculous than Dano’s upcoming version in The Batman. The director himself, Matt Reeves, had wanted to base his Riddler on the Zodiac Killer, a notorious serial killer in the San Francisco Bay area during the 1970s who was never captured.

A live-action Riddler was first seen in the 1960s Batman television series, portrayed by Frank Gorshin and John Asin. More recently Jim Carrey played the villain in the 1995 Batman Forever and Cory Michael Smith portrayed him in the television series, Gotham. And, of course, everyone is looking forward to Paul Dano playing him in the upcoming film, The Batman, next year. The Riddler has been voiced by John Glover in the DC animated universe and Robert Englund in The Batman video game and Wally Wingert in the Batman: Arkham video game series.

What About Some Riddles? 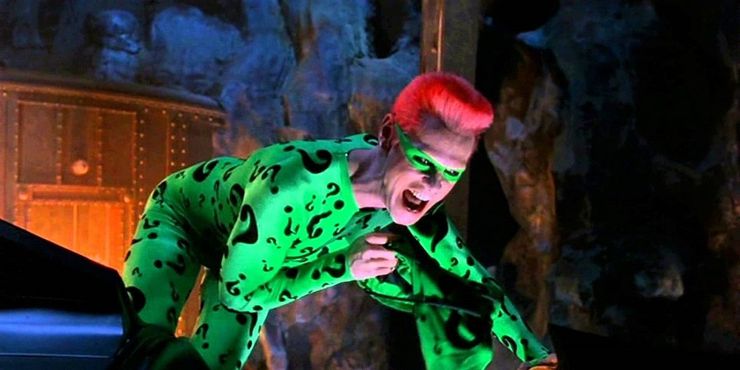 Riddles, you say? It wouldn’t be a blog post about the history of the Riddler without some of the supervillain’s best riddles!

In the Gotham episode “Under the Knife,” Ed Nygma poses the question to an abusive police officer, Dougherty: “I can start a war or end one. I can give you the strength of heroes or leave you powerless. I might be snared with a glance, but no force can compel me to stay. What am I?” The answer? Love. In Batman Forever, the Riddler asks: “If you look at the numbers on my face, you won’t find 13 anyplace.” The answer? A clock! On a much cheesier note, Frank Gorshin’s Riddler from the 1960s asked: “Which president wore the biggest hat?” The answer? “The one with the biggest head.” Cue my dad joke face palm.

Catch a glimpse of the Riddler in the trailer for The Batman below:

Do you feel like you have a better idea of who the Riddler is? What do you think of the version glimpsed in The Batman? Is there anything I’m missing in my history of the Riddler? Let me know in the comments below!