The Flash #783 blew our minds off with the appearance of an uncanny combination we never thought we’d see.

DC Comics is extending its omniverse as the happenings from Dark Crisis have made another breakthrough. In the Dark Crisis, Wally West and the other speedsters were looking for the missing Barry Allen from across the omniverse.

In an attempt to prove themselves to be called heroes, Wally’s kids, Jai and Irey, head out first and enter the Speed Force. Unluckily, they landed in a place they’d never want to be in.

The twins found themselves in what appears to be an alternate version of Gotham City. However, this Gotham City has distinct differences compared to the Gotham City we know. One stark contrast is that there is no “Wayne Tower” but rather an “Allen Tower” in the city’s heart. More so, we saw the different “Allen Tech” ads in The Flash #783 referencing the Wayne Tech we know from the Batman storyline. At that point, we already know that Barry Allen has become the Bruce Wayne of that alternate Gotham City.

Yet this realization begs whether the Barry Allen of that universe ended up like Bruce Wayne and became Batman. Suddenly, a shadowy figure approached Jay and Irey. 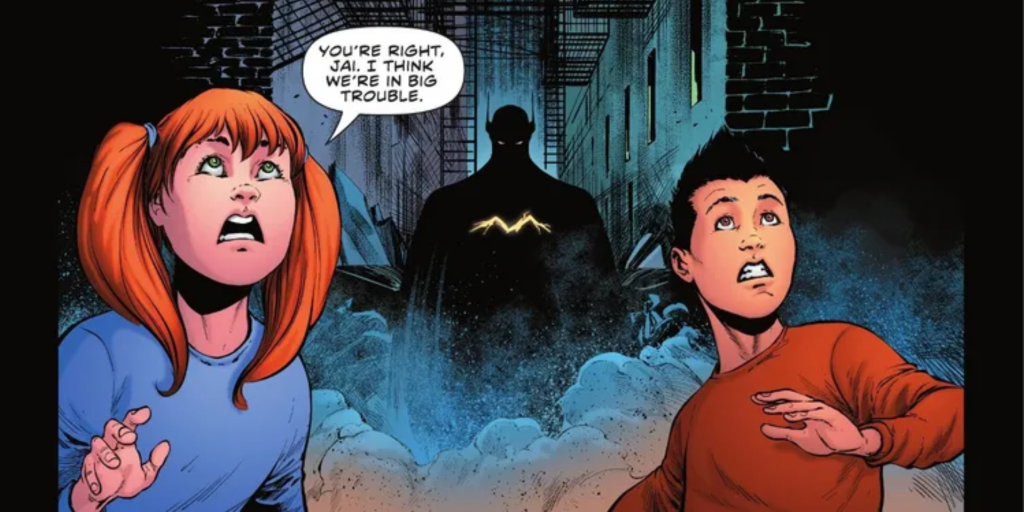 The towering black figure has the same suit as Batman but with minor changes. Instead of a sharp-pointed headpiece like Batman, the figure’s headpiece looks like that of The Flash. In the figure’s chest was a lightning bolt shaped like a bat. And that’s when we knew the twins had encountered the Batman-inspired Flash character.

In a tweet writer of The Flash #783 revealed the name of the Batman/Flash superhero fusion.

Admas tweeted a comic strip photo for The Flash #784, revealing that Night-Flash is the name of the new DC hero. He writes:

“Alright! #TheFlash 784 FINAL ORDER CUT OFF is Sunday. Please buy and spread the word. Thanks #FlashFamily! You are the best! P.S. What have Jai and Irey got themselves into?”

Alright! #theflash 784 FINAL ORDER CUT OFF is sunday. Please buy and spread the word. Thanks #flashfamily! You are the best!

P.S. What have Jai and Irey got themselves into? pic.twitter.com/LIULmDTiAa

The photo shows an ominous-looking Night-Flash, which is a nod to Batman’s dark persona. And the lightning sparks emanating from his eyes make the scene much more terrifying.

Thanks to this photo tweeted, we now know that Night-Flash opted for a different color when it comes to his cape. While the whole ensemble looks similar to Batman’s iconic look, the new hero sports a scarlet-colored cape, a nod to the color of Barry Allen’s The Flash.

The Flash #783 doesn’t reveal whether Night-Flash will become Jai and Irey’s foe. But it’s safe to assume that he will not take the sudden appearance of two young speedsters in his universe lightly.

Other The Flash fusions in the past

This is not the first time DC introduced a fusion of heroes in their comics. Similarly, a fusion between Batman and The Flash already did happen in the past during Dark Nights: Metal, made by Scott Snyder and Greg Capullo.

Dark Nights featured several evil Batmen who were all fusions of Batman with other superheroes. One of these is The Red Death, which resulted from Batman and The Flash fusion. And that character was nothing but evil.

In Dark Night, Batman apprehended Barry Allen and ran an evil experiment that would fuse their bodies. He succeeded and took over Barry’s powers and bodies, resulting in havoc everywhere he went.

Since there’s already history in DC that something evil might result from the fusion of the two heroes, it’ll be interesting to see how the creators of The Flash #783 will use this character.

The Flash #783 is the brainchild of writer Jeremy Adams, editor Rob Leigh, and artists Amancay Nahuelpan and Jeromy Cox.