Review: The Suicide Squad Is A Movie That Shouldn’t Work, But Does

Home » Movies » Review: The Suicide Squad Is A Movie That Shouldn’t Work, But Gloriously Succeeds

Review: The Suicide Squad Is A Movie That Shouldn’t Work, But Gloriously Succeeds

James Gunn’s The Suicide Squad is the rare sequel that reboots a franchise while still acknowledging what came before it. When the first film featuring this rag-tag group of villains came around, I fully expected it to be a disaster. Still, I enjoy the movie because it takes a big swing at DCEU worldbuilding, and it was a step towards seeing the kinds of ridiculous and violent stories that comics are a perfect medium for in the big screen. To say that film led to The Suicide Squad is an understatement, but this movie perfectly captures the vast array of “genres” that can encompass the “comic book movie.” Even more surprisingly, most of the characters in this very crowded ensemble are given space to have individual arcs throughout the film. This movie has heart, even though there’s nary a “good” person in it.

James Gunn delivered for DC Films in a big way with The Suicide Squad, because it is a gorgeous movie. Even with the knowledge that all roads lead to Starro the Conqueror, we see why James Gunn again responded to Scorsese’s criticism of Marvel and other comic book movies. By any definition The Suicide Squad is cinema. Many of the characters are very different from their comic book counterparts. It will be interesting to see if there is pushback from fans about this, especially given how limited the screen time is for some of these villains.

Yet, otherwise, there’s really nothing to complain about with this film. It’s violet, gory, and earns every bit of it’s “R” rating. The body count probably rivals at least the first John Wick’s. Still, even with vile people all around, the characters in The Suicide Squad give you people to root for.

Spoilers to follow, so come back after seeing the movie!

When I first saw the cast list for The Suicide Squad, I made a guess about their fates. When I saw the Starro escapes clip released last week, I knew I was right. The vast majority of these characters die, many of them very quickly. Thus, The Suicide Squad echoes the X-Force gag from Deadpool 2, in that after building up the first squad of characters, almost all of them are immediately killed. Still, with the exception of citizens and soldiers of fictional nation Corto Maltese, Gunn still tries to imbue these deaths with some kind of meaning. From the first death, a traitorous member of the squad, to the last, a superhero, we always get moments that try to add an emotional thread to the loss.

For example, Jai Courtney’s Captain Boomerang is, at his core, a ridiculous character. Yet, he survived the last film and was obviously a (work) friend to Margot Robbie’s Harley Quinn. So, when his character meets his fate, we are met with an exclamation of grief from Harley. (Even though she murders plenty of people in this movie herself.) Yet, when a named character dies, Gunn wants the audience to connect with that moment, even if it is ultimately a gag.

All too often, action films will rack up the body count, and then expect the audience to be moved when a named character is killed. Yet, in certain films, the audience gets desensitized to all the death. It’s why the stabbing scene in Saving Private Ryan is so disturbing. It reminds the audience amidst this large battle how intimate and meaningful the loss of each life can be. (There’s also an analogous scene in this film.) And ultimately, the film turns on the desire of these baddies to save innocent lives.

The Suicide Squad Is Massive Fun, and We Shouldn’t Care About DCEU Continuity

When the trailer for The Suicide Squad was released, people had a moment about the fact that Idris Elba’s Bloodsport took a shot at Superman with a kryptonite bullet. So, it’s natural to wonder about the continuity of this film in the DCEU, like if it’s before or after Birds of Prey. While it might be fun to talk about, that’s not the point of this movie. James Gunn and company told a story that can stand alone, and we should view it from that point-of-view first. Despite the violence and heavy moments of emotion, most of this movie is far lighter fare than we usually get from the DCEU.

Nanue, also known as King Shark and voiced by Sylvester Stallone, is essentially a walking gag. His character appears sparingly enough that his simple, gentle, slightly murderous, giant routine makes you love the character. Daniela Melchior plays Ratcatcher 2 (and Taika Waititi plays Ratcatcher 1!), and she is the emotional center of this film. She’s also, possibly, the only truly good character in the group. They are fun and engaging characters who often make you forget how bad some of them are.

Robbie also shines in this movie. Harley is truly at her most lethal, and there is an incredible moment where she makes reference to her “taste in men.” It was always obvious to people who understand how franchises work that she would survive this movie. Still, Margot Robbie continues to enrich her Harley Quinn performance in The Suicide Squad. She may be on a break from the character, but her Quinn is a character who can lead franchises. (Also, she’s the only surviving member of the first Suicide Squad, as far as we know.)

This Really Is a DC Comics Movie With Everything 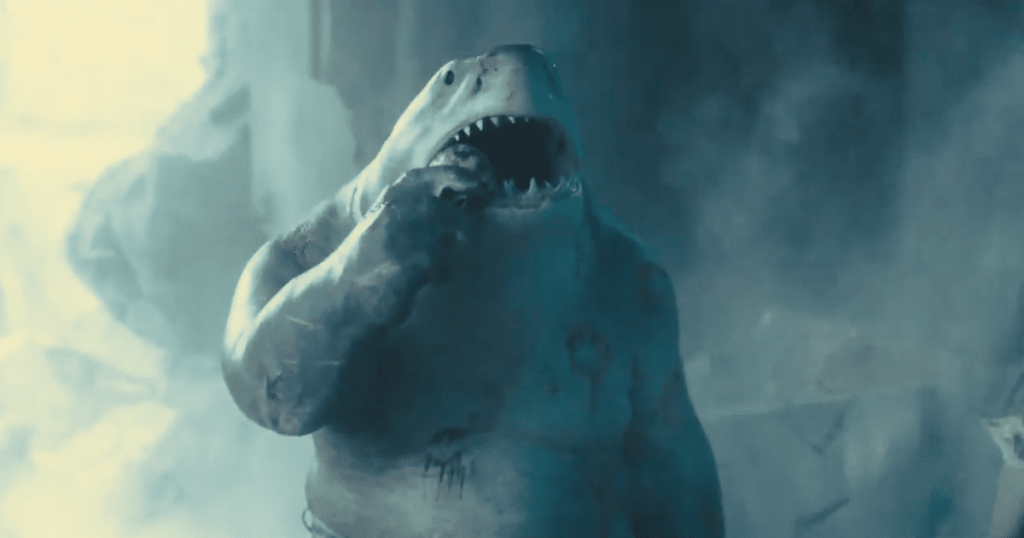 James Gunn may have feared for his future when he ended fired from Marvel over some old, bad tweets. Perhaps this is why he seems to have thrown everything into The Suicide Squad, from references to pulp movies and auteur cinema. Things like how he incorporates on-screen text and certain transitions and shots reminded me of B-movies, formerly the only place for weird, violent movies like this. Yet, there are plenty of scenes that employ imagery that would feel very at home in a Coppola or Scorsese film. (There’s even some Davids Lynch and Cronenberg in there.) This movie is kind of like when you discover that some Biggie songs are in Shakespearean iambic pentameter. It’s got some high art sensibilities wrapped up in a story about supervillains taking down an alien kaiju.

I don’t know if Gunn set out to make a statement about his prowess as a director, the power of comic book movies, or just did his level best to tell a weird, wild story. Either way, he’s succeeded at all three endeavors. He even sneaked an almost hopeful morality into the story, though such things are often left to loftier characters than these. It seems almost obvious to think that Gunn will continue to work with DC Films (and already has, with Peacemaker coming soon to HBO Max). Nonetheless, The Suicide Squad had a feel to it, like this might be our last superhero movie from James Gunn. Luckily, it’s not, as Guardians of the Galaxy Vol. 3 and the Christmas special are going into production soon.

Still even if Gunn completely whiffs those final two installments, and then moves on to other things, his legacy in superhero movies is set. The Suicide Squad is a triumph. It’s an example of how these movies are so much more than one genre. This is a big, stupid CGI-blockbuster, full of soul, with, character, and humanity.

The Suicide Squad is currently streaming on HBO Max and in theaters.

What did you think? How did The Suicide Squad live up to your expectations? Share your thoughts, reviews, and favorite moments in the comments below.