A new superhero is coming to The Flash’s Central City! We’ve met everyone from Firestorm to Plastique, and now fans can look forward to meeting a new metahuman called Phantom Girl! Actress Mika Abdalla was cast as Tinya Wazzo, also known as Phantom Girl, and she’ll make her first live-action appearance in The Flash‘s upcoming Season 8. She has the power to phase through solid objects, can fly, and has a demonstrated ability of disrupting electronic devices when phasing through them. Read on to learn more about the character and her origins.

Mika Abdalla Cast As Tinya Wazzo, But Who Is She? 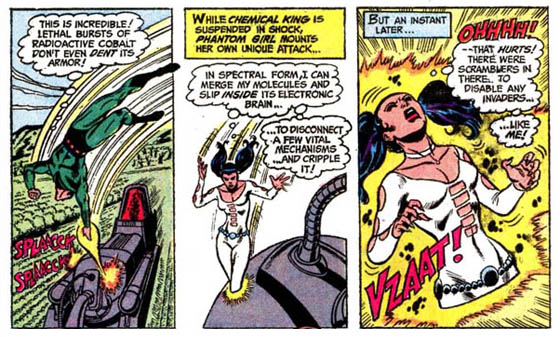 Tinya Wazzo? Phantom Girl? In case you’ve never heard of this new superhero, don’t worry! The character first appeared in Action Comics #276 (1961) and was created by Jerry Siegel and Jim Mooney. She comes from the planet Bgztl and as mentioned before, can phase through solid objects. Depending on the incarnation, Bgztl either exists in or is connected to the realm known as the Phantom Zone, and Phantom Girl can enter or exit it at will. She’s a member of the Legion of Super-Heroes (similar to the Justice League or Justice Society but from the 30th century), although it’s unknown if she’s going to be from the future and time traveled or she’s a 21st century version of her (the Legion does exist in the Arrowverse already). In some past storylines, she was known as Apparition, but it’s also unclear whether she’ll be going by that name or by Phantom Girl. According to The Wrap, Abdalla’s Tinya Wazzo will become part of the Flash universe when Iris Allen-West (played by Candice Patton), starts investigating her. The official description says the following:

“After years of successfully hiding in plain sight, reluctant meta-teenager Tinya Wazzo’s life is turned upside down when she becomes the subject of Iris West-Allen’s latest investigation for CC Citizen Media. Soon, Tinya is thrust into a dangerous world she never knew existed—one that will change her life forever.”

Tinya Wazzo and/or Phantom Girl’s appearance on The Flash will be the first live-action iteration, with Mika Abdulla bringing her to life for the first time. The character has already appeared in several animated shows such as Superman: The Animated Series, Legion of Super-Heroes, and Young Justice. Abdalla will star in Hulu’s upcoming YA rom-com, Sex Appeal, along with Margaret Cho, Skai Jackson, and Paris Jackson. She’s also been in Project MC2 and appeared in Cruel Summer.

The Flash airs Tuesdays at 8 PM EST on The CW. Currently, fans can catch the five-part “Armageddon” episodes before Season 8 starts again next year.

What do you think of Mika Abdalla cast as Tinya Wazzo? Are you excited to see her in Season 8 of The Flash? Let us know in the comments below!