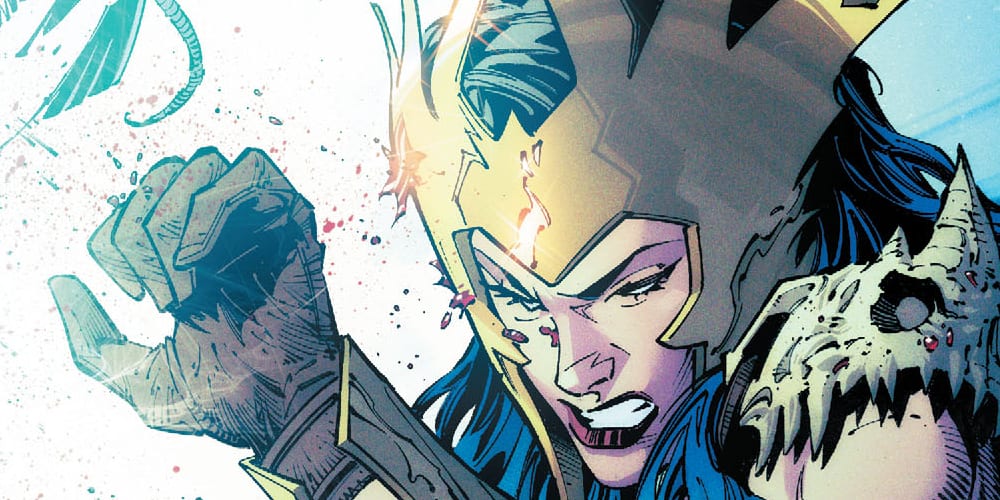 Dark Nights: Metal, the massive event from just a couple of years ago, was an insane crisis featuring seven evil Bat people (six men and one woman). Most importantly, it introduced the horrific villain, The Batman Who Laughs, a combination of Batman and the Joker. Metal was mostly a Batman event, even if he spent some large chunks out of the story. Then a lot happened behind the scenes. The next big event from DC was supposed to be 5G, or Five Generations. However, DC used the Coronavirus pandemic delays to massively restructure their narrative. Because of this, Scott Snyder and Greg Cappulo’s Dark Nights: Metal miniseries, Death Metal, went from a contained, standalone sequel to the big event. Thank Perpetua. Because after seeing how utterly badass Wonder Woman is in Death Metal, I’m all in for the series. 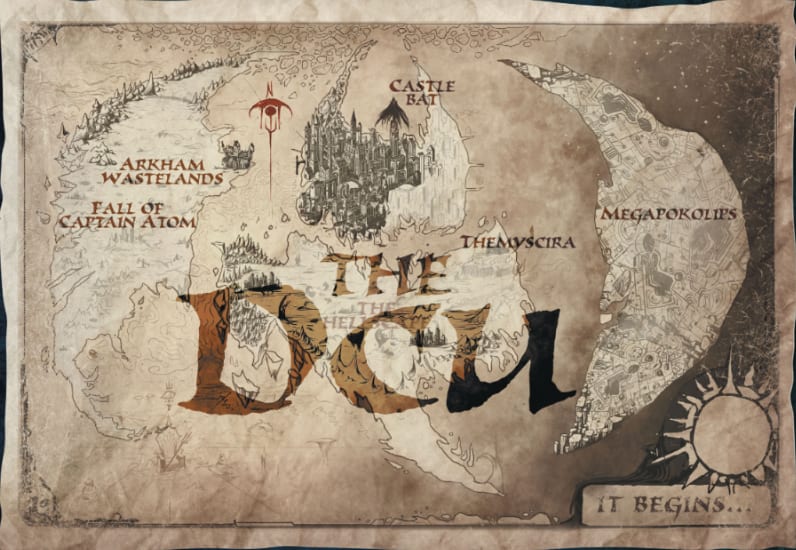 In the beginning, there was the DCU. (Image: Dark Nights: Death Metal #1, DC Comics)

Well, if it works, it works, right? One of the first things we see in Death Metal, right before introducing Wonder Woman as the Queen of Hell, is a map of the DCU—and it is actually called “the DCU.” Once again, just like Snyder did in Metal, we’re going a bit meta. As seen above, the world of the DCU is divided into several sections. We have Megapokolips, Fall of Captain Atom, Arkham Wasteland, Themyscira: the Hellscape, and Castle Bat. So, this is the DCU now. However, nobody remembers how it got this way. Wonder Woman has glimpses of how this world formed, but she’s mostly in the dark.

This helps the readers a lot. I haven’t read Year of the Villain yet. I wanted to wait and review the Omnibus…but who knows when that will come out now, so I guess I’ll catch up. Anyway, Snyder catches us up with some info dumps. Generally speaking, readers hate info dumps. In this case, not only is it helpful, but Greg Capullo’s art makes it feel much more energetic. And the art might be the real star of Death Metal. 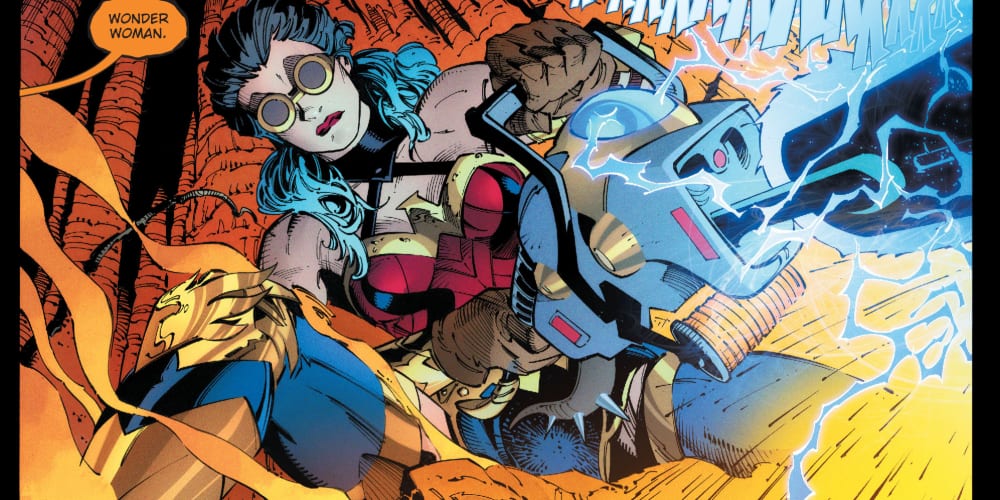 Scott Snyder’s writing is excellent. The first issue has a lot going on, and we’ll get to some of that. But as much as I enjoyed the story, Capullo’s art…holy Barbatos, Batman! I’ve always been a fan of Capullo, but there’s something here that stands out more than ever before. One, his Death Metal art shows just how much he loves these characters, Wonder Woman most of all. Two…he’s excited. The artwork has crazy energy. And because the art is so intense, there are several times that feel like we’re at a crazy cliffhanger, but then we turn the page and keep going.

In many comic reviews, the colorist, inkers, and letterers sometimes never get credit. I’m very guilty of not remarking on their contributions, but no more. Here, we have to hold them up, because they are all part of how the art works. Tom Glapion’s inks take Capullo’s art and makes it bold. On top of that, FCO Plascencia’s colors make the art vibrant. It’s like a holy trinity of artists. Or, in this case, maybe unholy is a better term. And if you never thought much about the lettering in a comic, Tom Napolitano shows why you should. Several characters have their own specific bubble styles, fonts, and colors. This is a comic team in every sense of the word. 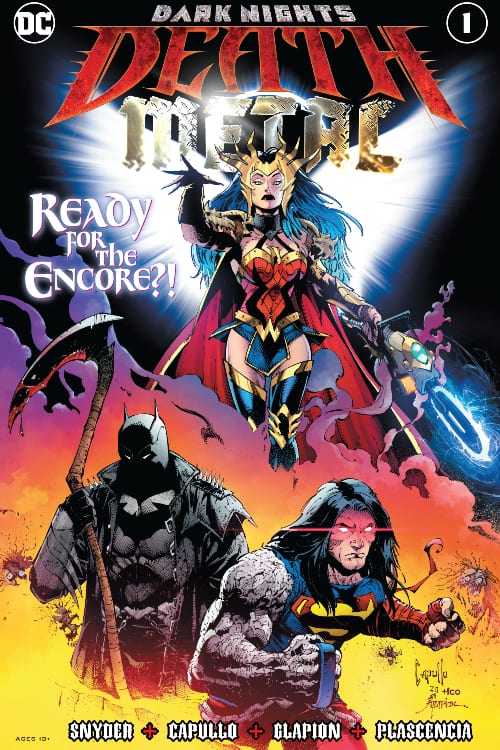 One of the biggest problems the heroes of the DCU faced since Metal is that the Batman Who Laughs has all the tactician skills of Bruce Wayne and all the crazy of Joker. In Death Metal, Batman has all kinds of plans to bring down the Batman Who Laughs. He’s also kind of misogynistic, in a way, towards Wonder Woman. Don’t worry; I’m not going to go into a political rant, at least not in this article. When Batman shows up, he immediately starts telling Wonder Woman what to do. But again, the Batman Who Laughs is Bruce Wayne, from a world in the Dark Multiverse.

Wonder Woman takes Bruce’s orders and decidedly doesn’t follow them. But she is a lot smarter than Batman gives her credit for. And in Death Metal, it’s clear that Wonder Woman is more intelligent than Batman. Since the creation of the “Trinity”—Superman, Batman, and Wonder Woman—Batman was always the “brains” of the group. Snyder just flipped that. All of Batman’s plans in Death Metal are bad ideas because, as Diana points out, anything he thinks of, the Batman Who Laughs will have considered too. And we don’t even know the full extent of his plans. So she takes the reins instead. Well, actually, in Death Metal, it’s more like Wonder Woman takes the pull-string. 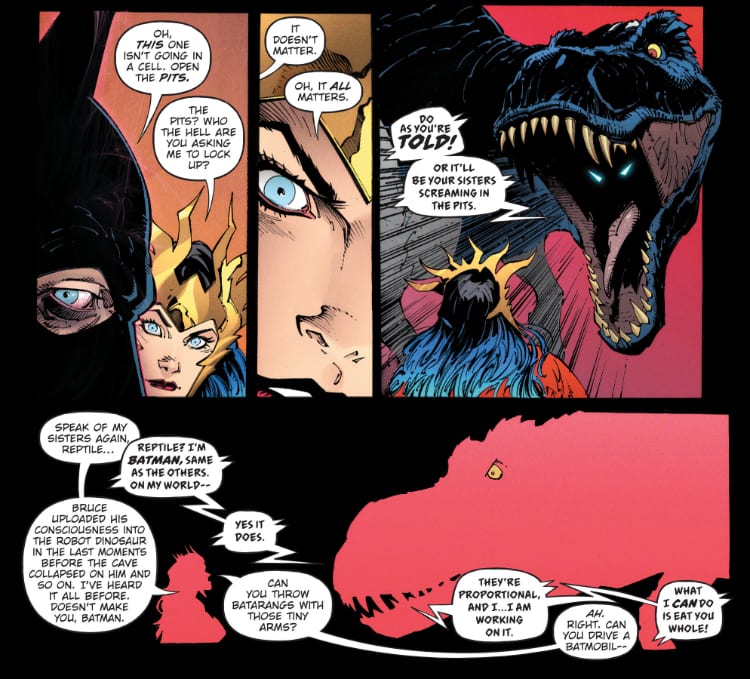 Wonder Woman has always been a much more powerful character than anyone gives her credit for—including her colleagues and enemies. And where Snyder and Capullo take Wonder Woman in Death Metal #1 will make you cheer, gasp, curse, and reread a page over and over again. It’s kind of a bait and switch. For most of the Death Metal #1, Snyder and Capullo lead us to believe that Wonder Woman has accepted her role in the Batman Who Laughs’ world. We, as readers, undermine her. Sure, the Batman Who Laughs has every reason to believe he has Wonder Woman on a leash, just as he does Harley Quinn, Aquaman, and Superman. He’ll learn.

What the Hell Is Crisis Energy and What Exactly Matters Now?

Snyder gets really meta in Death Metal. The DC Reboot cycle is kind of a joke now, but they’ve started to build a story out of it. The Dark Multiverse helps set up some of the building blocks, and the character Perpetua solidifies the narrative a bit more. What does it mean that the DCU multiverse was created with dark “crisis” energies? And in turn, that the multiverse gets thrown into a loop of destruction and rebuilding? It means, as the first issue is titled, that it all matters.

There’s a lot to unpack in Dark Nights: Death Metal, from Swamp Thing (or what’s left of him) to Wonder Woman melting down her invisible jet. But there’s just one more fun point to make. If you thought seven nightmare Batmen was insane…prepare to meet the rest of the Dark Multiverse Batmen: 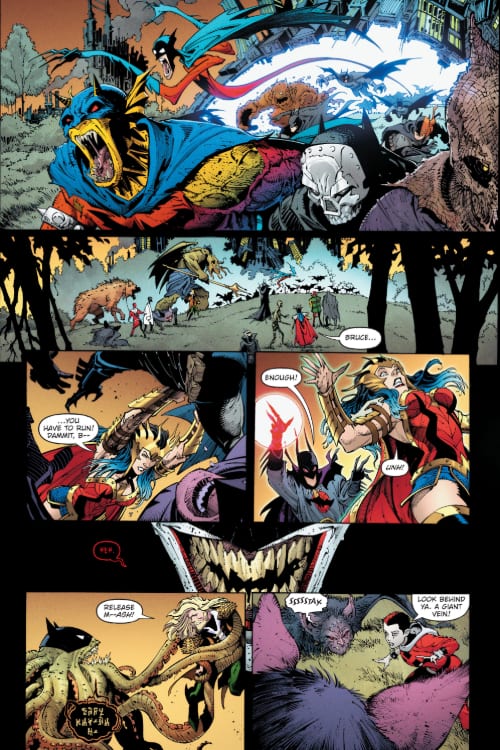