The third volume of Brandon Sanderson’s White Sand is out now. The graphic novel trilogy by acclaimed fantasy author Brandon Sanderson is part of his shared universe – the Cosmere. The first two issues were illustrated by Julius Gopez of DC Comics. But an artist change between volumes two and three means that this final graphic novel was illustrated by artist Fritz Casas. Rik Hoskin adapts the trilogy from Sanderson’s original draft. Dynamite Entertainment publishes the series.

The White Sand graphic novels are part of our guide to Brandon Sanderson’s Cosmere – his shared universe where his adult novels all take place. Notably, the story of White Sand is the earliest chronological story within the Cosmere. The story is based upon an adaptation of Sanderson’s first unpublished novel. And text from the opening scenes of White Sand: Volume 1 has also been published in the Cosmere anthology Arcanum Unbounded.

White Sand takes place on the Shardworld of Taldain. A tidally locked planet inhabited by two binary societies. The Daysiders – who live in the desert and can utilize the powerful Sand Mastery. And Darksiders – who are more technologically advanced, and live in the dim illumination of UV light.

The story follows Kenton, a young Daysider in training to be a Sand Master. Sand Mastery is the primary magical system of Taldain. It is (likely) powered by a Shard of Adonalsium known as Autonomy. Sand Masters harness the power of Autonomy to manipulate the titular white sands of the desert for attack and defense. 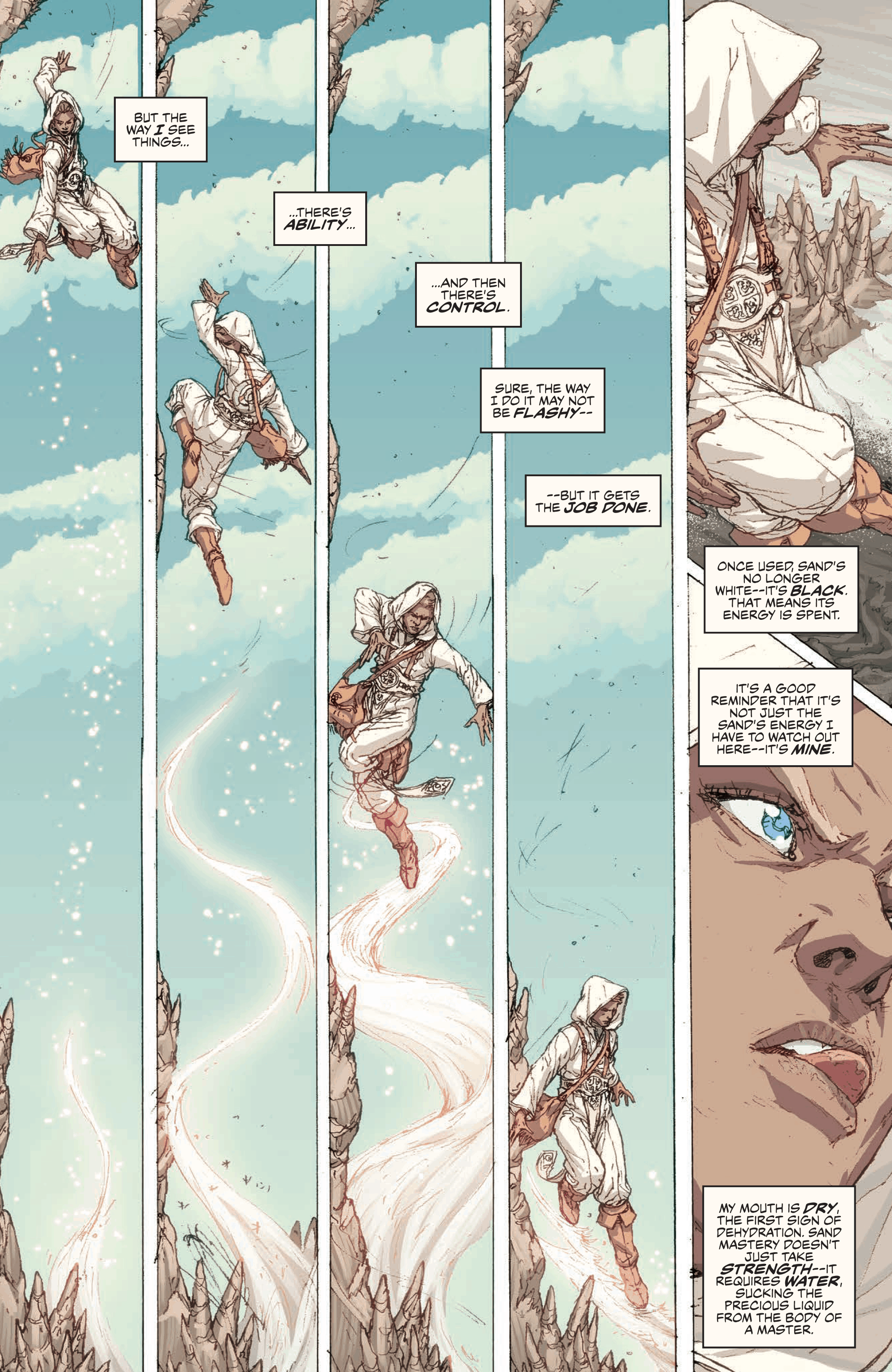 In Volume One of White Sand, Kenton endeavors to keep the Sand Master order alive after a surprise attack decimates his people and kills his father. This volume also introduces the character of Khrissalla. She is a Darksider who also becomes a Worldhopper and scholar of Cosmere mythology. Fans of Sanderson’s work may be familiar with Khriss as the author of the Ars Arcana. However, all of that occurs long after the events of White Sand. Khriss encounters Kenton while searching for the ‘sand mages’ whom she believes know the truth behind the death of her betrothed – Gevalden. Kenton and Khriss travel together on their individual missions as they begin to converge. Kenton seeks those who betrayed his order and killed his father, the head Sand Master. Khriss also searches for answers of her own, unaware that Kenton is one of the mysterious sand mages she searches for.

Volume Two of White Sand finds Kenton and Khriss working together to navigate the politics of the capital city. With assassins after them, they continue to seek answers to the mysteries that drive them. Upon learning that Kenton is the last Sand Master, Khriss tries to convince Kenton to teach her the secrets of his magic. He refuses because he believes that as a Darksider, she cannot harness the power of the sun to manipulate the sand. Kenton also strives to use Sand Mastery to endear the order to the common people, to whom the Sand Masters often considered themselves superior.

The third volume of White Sand came out this week, rounding out the trilogy of graphic novels. The official synopsis gives this info: “Underpowered and overwhelmed, Kenton tries to hold the Sand Masters together as forces political and personal conspire against them. Now, in one final push, Kenton must tap the most dangerous depths of his own abilities to combat the enemies within his own guild, and discover the truth behind the ambush that killed his father and almost destroyed the Sand Masters for good.”

How will this graphic novel trilogy conclude? Will Khriss learn the secrets of Sand Mastery? It will be interesting to see how far this series takes the character of Khrissalla. What will be revealed about this mysterious Worldhopper, and her relation to the rest of the Cosmere mythology? Can Kenton prevail over his enemies, and become the a true Sand Master? Answers await in the final volume of this fantasy trilogy, on sale now.