Best Run Ever: Saga of the Swamp Thing by Alan Moore (Part 1) 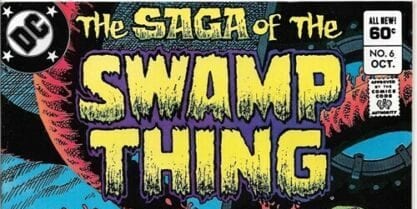 The Swamp Thing television series on DC Universe is a hit…and was immediately canceled. Whether you’re just discovering the character, or if you’ve always been a fan, when the last episode airs, you’ll want to fill that plant-monster sized hole in your heart with something. And thankfully, we have Saga of the Swamp Thing, one of the greatest comic book runs in history, by the legendary Alan Moore.

Book One: The Saga of Alec Holland

Moore’s run on Saga of the Swamp Thing starts with the title character holding his arch nemesis Arcane as the villain dies. All Swamp Thing feels is loss, and the best thing he can do is run back to the swamp, contemplating his existence. And then he dies. It’s a lot for one issue, and for the entirety of the second issue, he’s dead. Swamp Thing was once Alec Holland, as mentioned above, but in Moore’s first story, he breaks Swamp Thing’s psyche.

As it turns out, he’s not Alec Holland. He’s dead. Swamp Thing just absorbed his memories and personality traits. For years, Holland thought that he could find a way to be human again, but that hope’s ripped away. With the Floronic Man, a former C-level villain, communing with the Green and going crazy, it’s not the best time for the Avatar of the Green to go into a depressive coma.

The Floronic Man, however insane and horrifying his plan is, isn’t really a bad guy either. He’s in pain, hurt. When Swamp Thing finally defeats him in time for the Justice League to show up, he still wants to save the world of plants. Superman wraps his cape around him and tells him it’s going to be okay as he walks him to wherever they keep supervillains. It’s the most Superman-y Superman scene ever, and it’s in a Swamp Thing story written by Alan Moore of all people.

Swamp Thing is now at peace with what he is. He’s not human, h e doesn’t even need to breathe anymore. Nor is he Alec Holland. He’s Swamp Thing.

The second story in Book One of Saga of the Swamp Thing is short, but some of the best stories are. We get to know Abby Arcane a bit more in this one, and her struggles with her husband Matt Cable. Abby loves Swamp Thing, which drives Matt into a jealous rage, but she’s not a pushover character. She gets a job helping autistic children in a children’s mental hospital. Of course, one of the patients, a little boy named Paul, is haunted by a demon monkey that is fear.

And since a demon is involved, we also get a team up/fight with one of my favorite DC superhero monsters: Etrigan. Etrigan wants to stop the Monkey King, even if it means killing the boy. Abby wants to protect the kids. Swamp Thing wants to help Abby. As far as superhero horror stories with demons and freaky monkeys go, it’s very sweet. Swamp Thing even holds Paul’s hand as he walks him back to the hospital. It’s an unexpected heartwarming story.

Book Two: Swamp Thing Learns Who He Is

Saga of the Swamp Thing: Issue #28

This one-shot might be my favorite of all time. It’s a harrowing, but quiet, story that not only concludes the story of Alec Holland, but bridges into the next big story too. Holland’s ghost starts haunting Swamp Thing, driving the creature mad. He starts wandering around the swamp, digging it up until he finds Holland’s skeleton. Once he properly burries it, Holland is able to move on, and so is Swamp Thing. It packs a strong emotional punch.

Arcane is back! And he’s taken Matt Cable’s body—Abigail’s husband. And yeah, it turns out he does have sex with his niece while impersonating Matt because he’s just that evil. Arcane starts calling evil to him, making people commit horrible acts of violence in the meantime. Even though Swamp Thing defeats him, it comes at a great cost. Arcane sends Abby’s soul to Hell.

Saga of the Swamp Thing: Annual #2

An epic. That’s the best way to describe the Saga of the Swamp Thing annual. Swamp Thing traversing the realms of the dead, getting help from Deadman, Phantom Stranger, the Spectre, and Etrigan the Demon. He’s going to get Abby back, no matter what it takes. How many characters have literally gone through hell for the person they love?

Saga of the Swamp Thing: Issue #32

Um…there’s these small creatures who come from outer space and talk really weird. They want to set up shop on Earth and Swamp Thing convinces them not to because humans are basically trash. Like I said, sometimes this book gets weird.

Saga of the Swamp Thing: Issue #33

Len Wein guest writes here, but we get one of the most important reveals so far: Alec Holland (but not Alec Holland…just his psyche) wasn’t the first Swamp Thing. When the Earth is in danger, the planet creates a warrior. And the planet is going to be in danger very soon. Too bad all of this is revealed to Abby in a dream—by Cane and Abel from Sandman no less.

Saga of the Swamp Thing: Issue #34

Abby and Swampy confess their love for each other! Yay! But…how do they, you know, do it? The answer is the most Alan Moore thing ever: drugs. Swamp Thing creates a fruit out of himself, and when Abby eats it, they both go on a psychedelic trip together. It’s actually pretty romantic too, and a nice way to end Saga of the Swamp Thing Book Two. There were some pretty intense and horrifying moments in the early parts of the book. It’s nice to see these two happy for a change.

Book Three: The Hero of the Green Emerges

Nukeface. This is a very Alan Moore creation, and a great addition to Swamp Thing. Nukeface is a mutated nuclear power plant worker with an addiction to nuclear waste. Nukeface is not a villain. He’s not a hero either. He’s just…Nukeface. He’s a nice guy who doesn’t realize he’s sick and spreading his sickness. He accidentally kills people when he gives them his “drink,” which they think will just be alcohol. But he seems to think that too. This includes Swamp Thing. He just kind of shoves the nuclear waste into Swamp Thing’s mouth, and our favorite creature starts to disintegrate. And…he dies. But, you know, this is comics. Nukeface? Well, after possibly infecting a pregnant woman trying to help him, he just kind of wanders on to the next place. Maybe never to be seen again.

Saga of the Swamp Thing: Issue #37

It’s worth looking at this issue alone for two reasons. One, we see, for the first time, Swamp Thing regrow himself from the Green. It takes him several weeks, but he does it. However, we also get something very special: the debut of John Constantine, the Hellblazer himself. He’s there in all his drinking, smoking, and English glory. Maybe a little more well-dressed than his later days, but still the character we love. He’s investigating an evil rising in the world, and decides that it’s time to bring in Swamp Thing.

Constantine decides to put Swamp Thing through a test of sort. He has Swamp Thing rebuild himself in Rosewood, Illinois, a town once infected with vampires that Swamp Thing destroyed by flooding it. Well, it’s still flooded, but those vampires aren’t dead. They’ve transformed into lake monsters, and they plan on taking over the nearby towns. Swamp Thing’s new regenerative powers are put to the ultimate test. He can’t win this fight if he keeps thinking of his body as human. When he realizes this, he does something incredible—he turns into the lands surrounding the lake and destroys it, along with the vampires. It’s an epic image.

Saga of the Swamp Thing: Issue #40

What does it look like when Alan Moore tackles feminism in a horror comic about Swamp Thing? Werewolves. Saying this issue has balls isn’t quite right. Maybe ovaries? Much of the issue discusses a woman’s period and how, in the past, they were sequestered. But he also shows that even today they are ostracized, such as the “are you PMS-ing” remark when the husband is mad at his wife for not doing every little thing he tells her to.

Her transformation into a werewolf is also interesting. She doesn’t grow fur and rip out of her clothing, the wolf part of her pulls itself out of her skin through her mouth. It’s a little on-the-nose as far as symbolism goes, but it’s still a powerful image. She wants to be free of the structures that keep women subservient, but even when she gets away from her husband, she still sees societies shackles everywhere. By the time Swamp Thing finds her, she’s already figured out the only way to gain freedom is to die. It’s a bitter one-shot, and compared to Alan Moore’s writing after Swamp Thing, surprisingly feminist.

Voodoo! Ghosts! Racism! It definitely looks like Alan Moore was much more interested in using Swamp Thing to talk about social issues by this point. Issues #40-42 aren’t subtle in their messages, the way others are, and the work in these three issues particularly are the first steps to V for Vendetta and Watchmen. In these two issues, Swamp “Alec” Thing has to solve a paranormal crisis in his own hometown. A tv studio wants to use an old plantation to film their show, but it turns out to be haunted by the emotions of a terrible night when a slaveowner flayed one of his slaves for being romantically involved with his wife.

The fear and anger of that night transform the cast members into the people of that night, and nearly kills them all—one unfortunate actor doesn’t make it. The commentary comes in the beginning and end of the story. When it starts, the white actress is admittedly racist and the black actor hates her. Through living as the slaveowner’s wife and her slave lover, she falls in love with her costar. Basically, learn empathy, be a better person. But again, as blatant as it is, Alan Moore writes Swamp Thing so well, it’s easy to forgive.

We’ll be back with the rest of the series soon. In the meantime, check out the best run ever for Batgirl, and the first part one of Spider-Man’s best runs ever, Brand New Day.