For Batman, Joker will Always Have the Last Laugh | Comic Years

Home » COMICS » For Batman, Joker will Always Have the Last Laugh

For Batman, Joker will Always Have the Last Laugh

In one month, the Batman arch-nemesis Joker will star in his own feature film—an Elseworlds style take on the character for the DC Extended Universe. This will be his…twenty-something-ish portrayal outside of comics. From movies to television shows to cartoons, it seems like we can’t get enough of him. And there’s a good reason why: he’s one of two villains in all of comics who wins even if he loses. Batman will never truly defeat the Joker. Batman is playing chess, but Joker? He’s playing whack-a-mole with all of Gotham.

Why the French for an article about the Joker and how he’s always a thorn in Batman’s, uh, derrière? Well, it turns out that the Joker is French. At least his literary granddaddy is. The look of the Joker was inspired by the silent film “The Man Who Laughs,” starring Conrad Veidt as a man who was disfigured as a child by the king. He is perpetually grinning, showing all his teeth and gums…and he looks just like the Joker. Or rather, Joker looks just like him.

Conrad Veidt in The Man Who Laughs. Image via Universal Pictures.

The Man Who Laughs is based on Victor Hugo’s popular novel (his other one, with less depressing people and fewer pages). He does not look like the Joker, but if he saw what his work would one day inspire, he might make this face again: Joker and the Xanatos Gambit 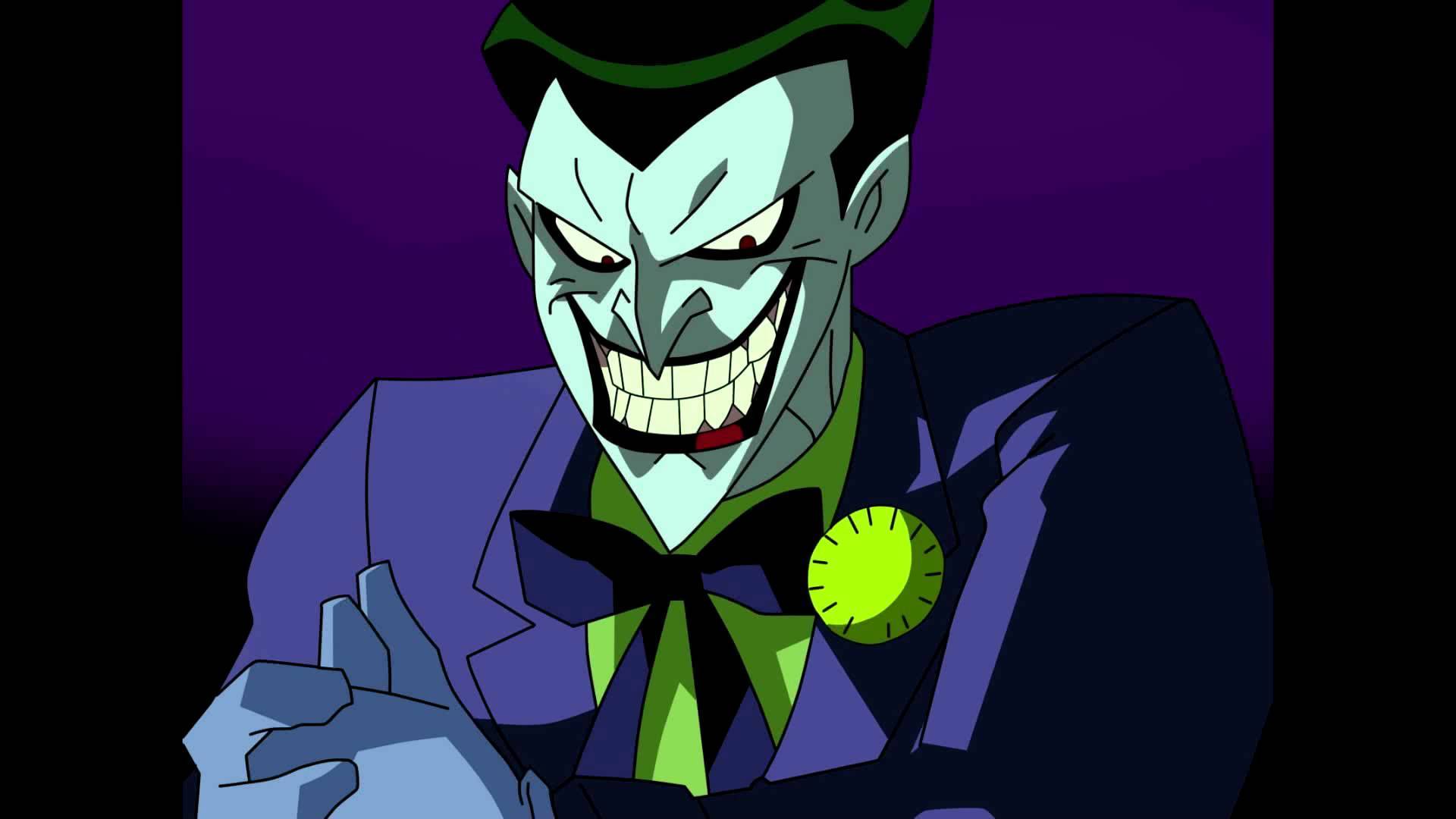 The Joker must have also watched cartoons (Warner Brothers)

Let me tell you a quick story. I was talking with some colleagues in one of my college’s English departments about the Bible as literature. I was explaining how, in the story of Job, Satan wins no matter what. If Job denounces God, Satan wins. If Job doesn’t, Satan wins as he just tricked God into letting an innocent man be tortured just to prove a petty point. And if God doesn’t take the bet, well, he’s a coward, and Satan wins. There is no winning for God in the Job story. A colleague smiled and said, “Ah, yes, a classic Xanatos Gambit.” When I laughed a little, saying that it’s incredible that a literary term started because of the Gargoyles cartoon series, his brow wrinkled. He had no idea—and was suddenly a little embarrassed. What does this have to do with Batman and the Joker?

Everything the Joker does is a Xanatos Gambit. He’s not interested in winning or losing. He just wants to play the game. And while Batman tried desperately to finally “win.” The Joker makes it clear that the only way Batman can defeat him is to kill him…except that’s not even an option anymore. 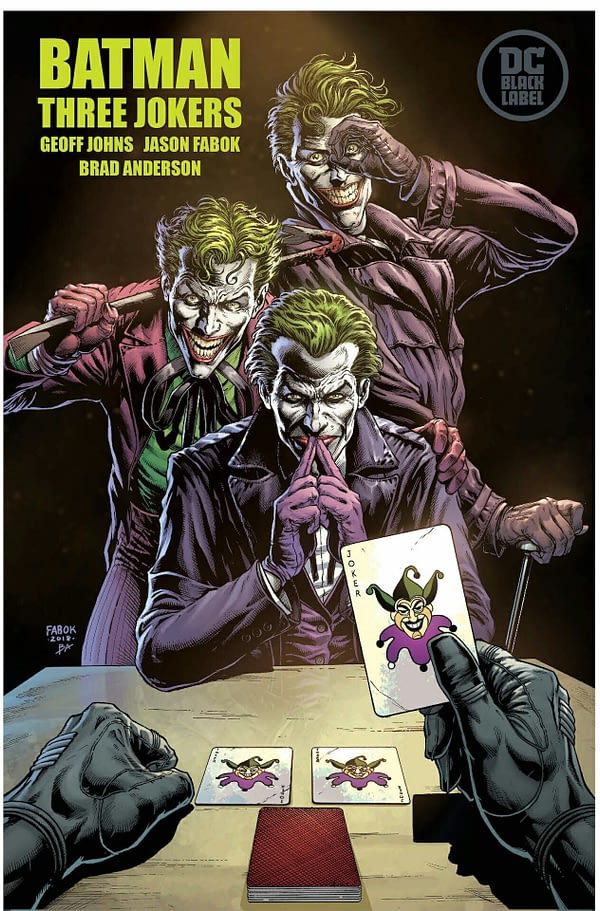 In one of the most significant and most recent twists to the Joker legacy, Batman finds out that there are three Jokers. This is Joker’s…or the Jokers’…final victory over Batman. Now, even if Batman does cross that line, another Joker is ready to remind him of that. At first, this twist seemed a bit dumb, but it’s actually the perfect joke to play on Batman. For years, Batman wanted to find his one greatest enemy of all time and finally put him away for good. But that’s the joke—Batman was looking for one Joker. Surprise! He needed to look for three. The only way for Batman to defeat the Joker is to end the game. Now, the game will never end.

The Best “Jokes” Joker Ever Played on Batman

Joker has dozens of amazing stories, and narrowing it down isn’t easy, but these six should set you up for a great reading experience. Movies aren’t included because, well, we all know how great Jack Nicklinson and Heath Ledger were in their roles and we don’t need to keep talking about it. And the staple The Killing Joke is left out for the same reason. It’s already on every list! 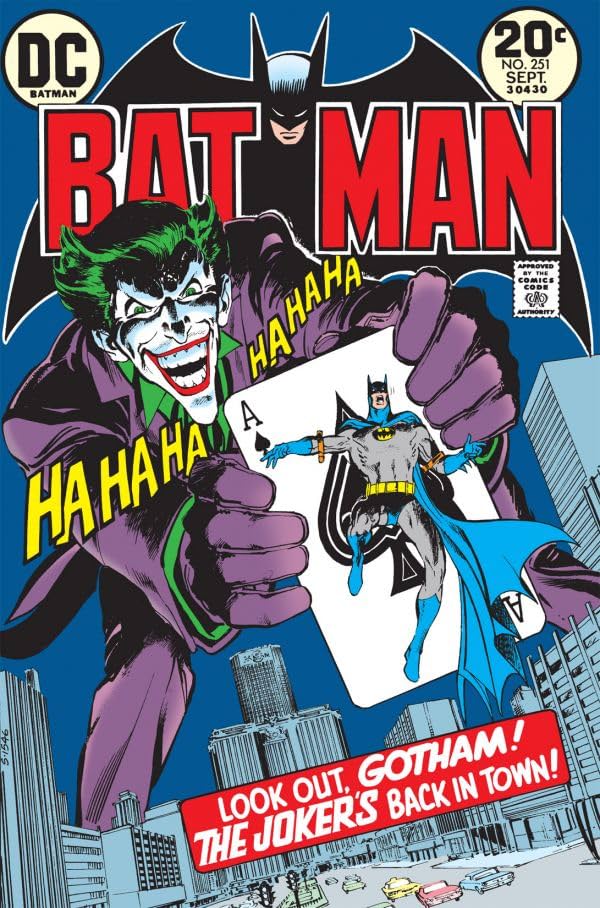 This was the first story post-1960’s campy Batman that reestablished Batman and Joker as more gritty, crime-oriented characters. Joker is back to his murderous ways, deciding to kill five of his henchmen he felt weren’t pulling their weight. And Batman has to save the criminals from an even worse criminal. What this story does well, however, is set up the ever-evolving back-and-forth between Joker and Batman. Joker defeats Batman—but since Batman was incapacitated at the time, Joker doesn’t think he won “fairly,” so he walks away, “letting” Batman live. But really, the Joker will never properly kill Batman. As he says in The Dark Knight, Batman is “too much fun.”

The Man Who Laughs 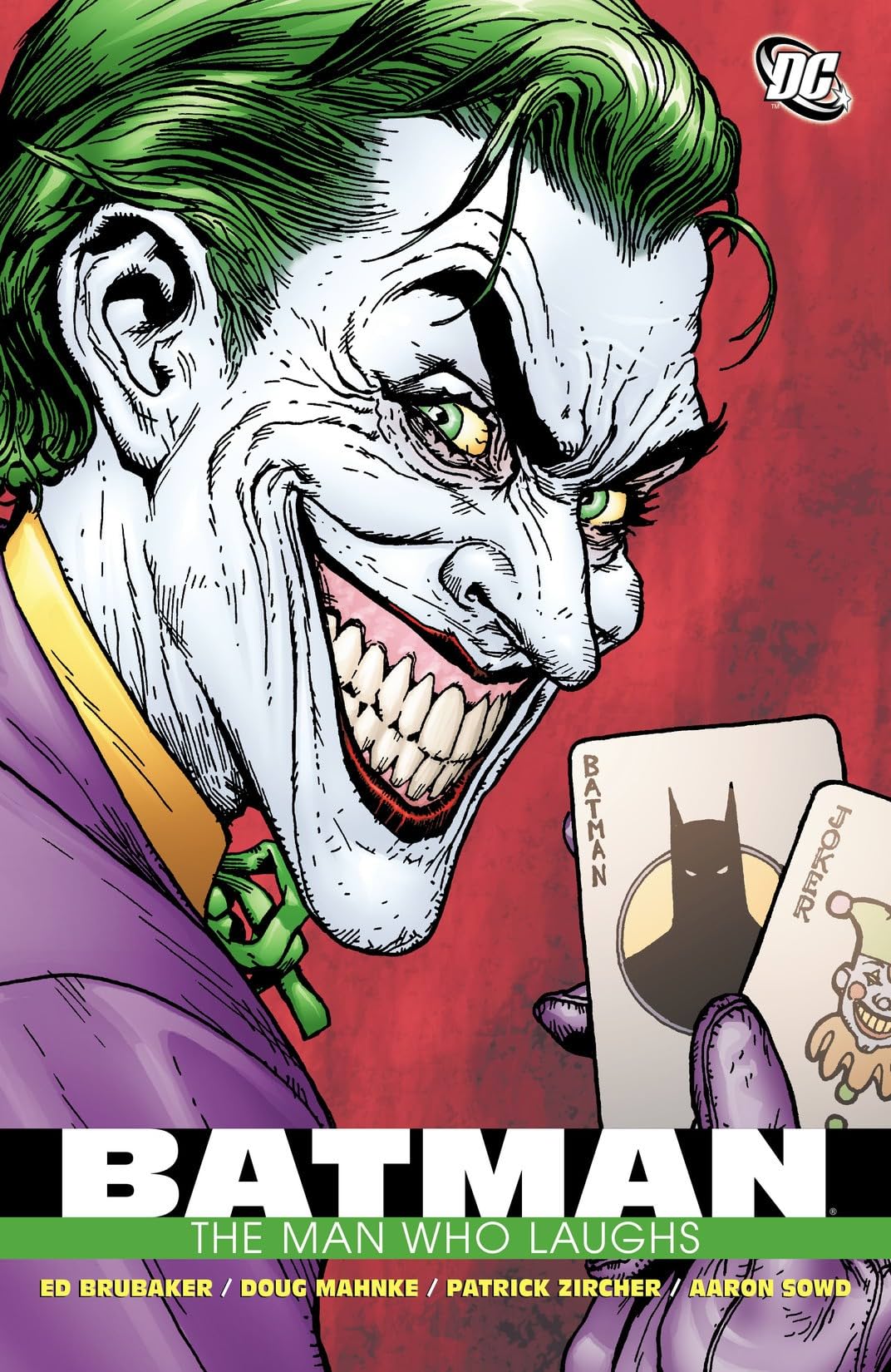 Borrowing the title of the Victor Hugo book that started Joker on his path, Ed Brubaker’s retelling of Batman’s classic first case involving the Joker is now a classic in its own right. The story works as a follow up to Frank Miller’s Batman: Year One (also a classic). The original Joker story was great—but, as comics were in the golden age, there wasn’t much in the way of character development. Brubaker fleshes out the mythos and adds layers to Joker while establishing him as a more contemporary villain. And Mahnke’s art is brilliant in it. He captures a nostalgic feel in a way that reminds us we’re in a new era. 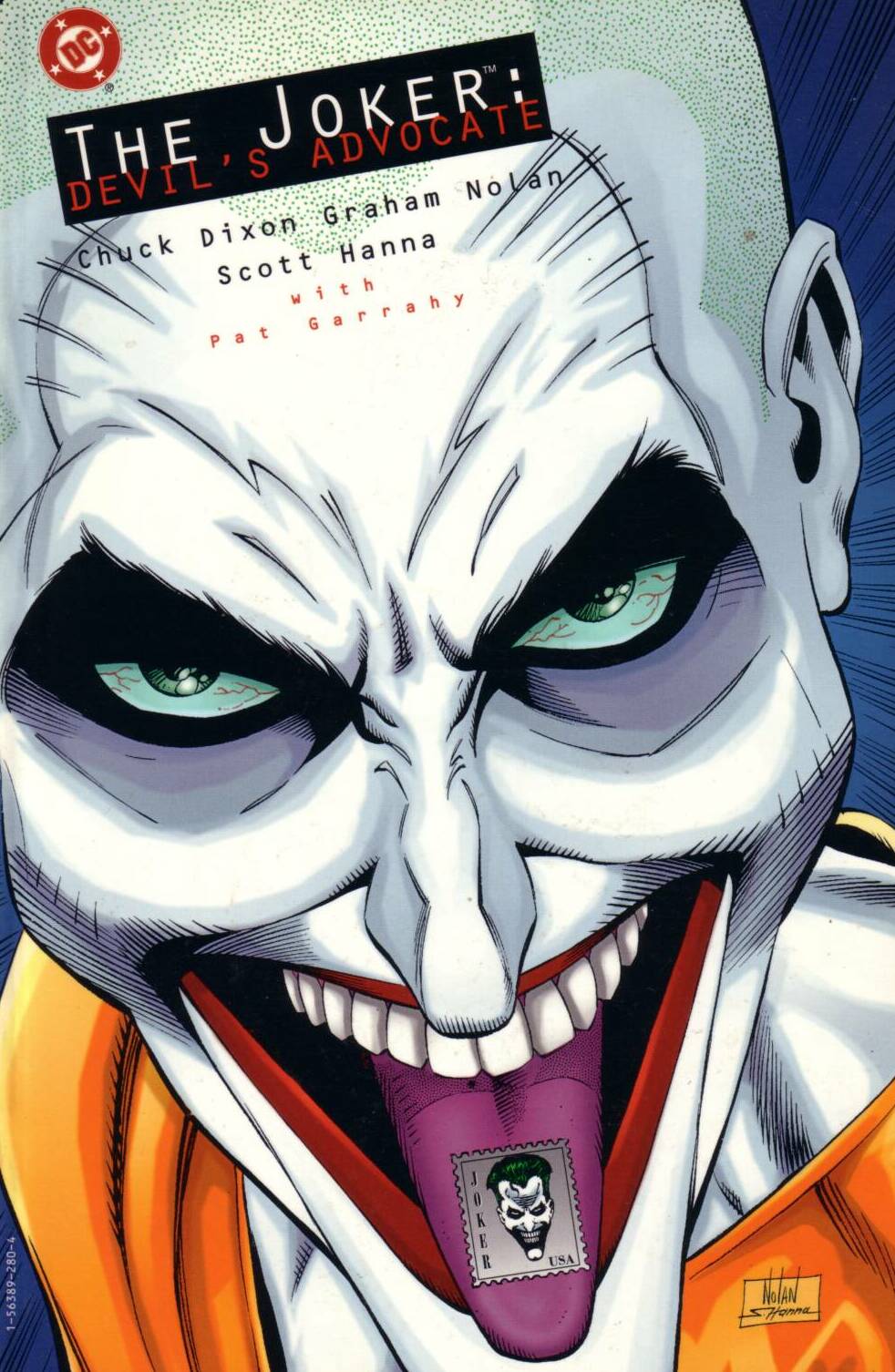 Joker keeps getting out of the death penalty because he is always declared insane—but this time, he’s found mentally competent and stands trial for his most recent crime. There’s just one problem…Batman finds evidence that Joker is innocent. For the first time, Joker is eligible for the death penalty, and Batman needs to decide if he can let his enemy, who has killed probably thousands of people at this point, be punished for a crime he didn’t commit. Of course, he’s Batman, and as he tells Robin, “Justice cuts both ways.” Robin isn’t too happy about his decision to help Joker, but Batman makes a point to the clown. When Joker points out that he’s still alive, Batman says “That’s right. And when you’re here, alone, unsleeping in the dark, remember…every breath you take you owe to me.” When Joker doesn’t reply, Batman can’t help but flip their roles with “Don’t have any jokes for me?” Joker gets a taste of what it’s like to be the butt of the joke…and he doesn’t like it. 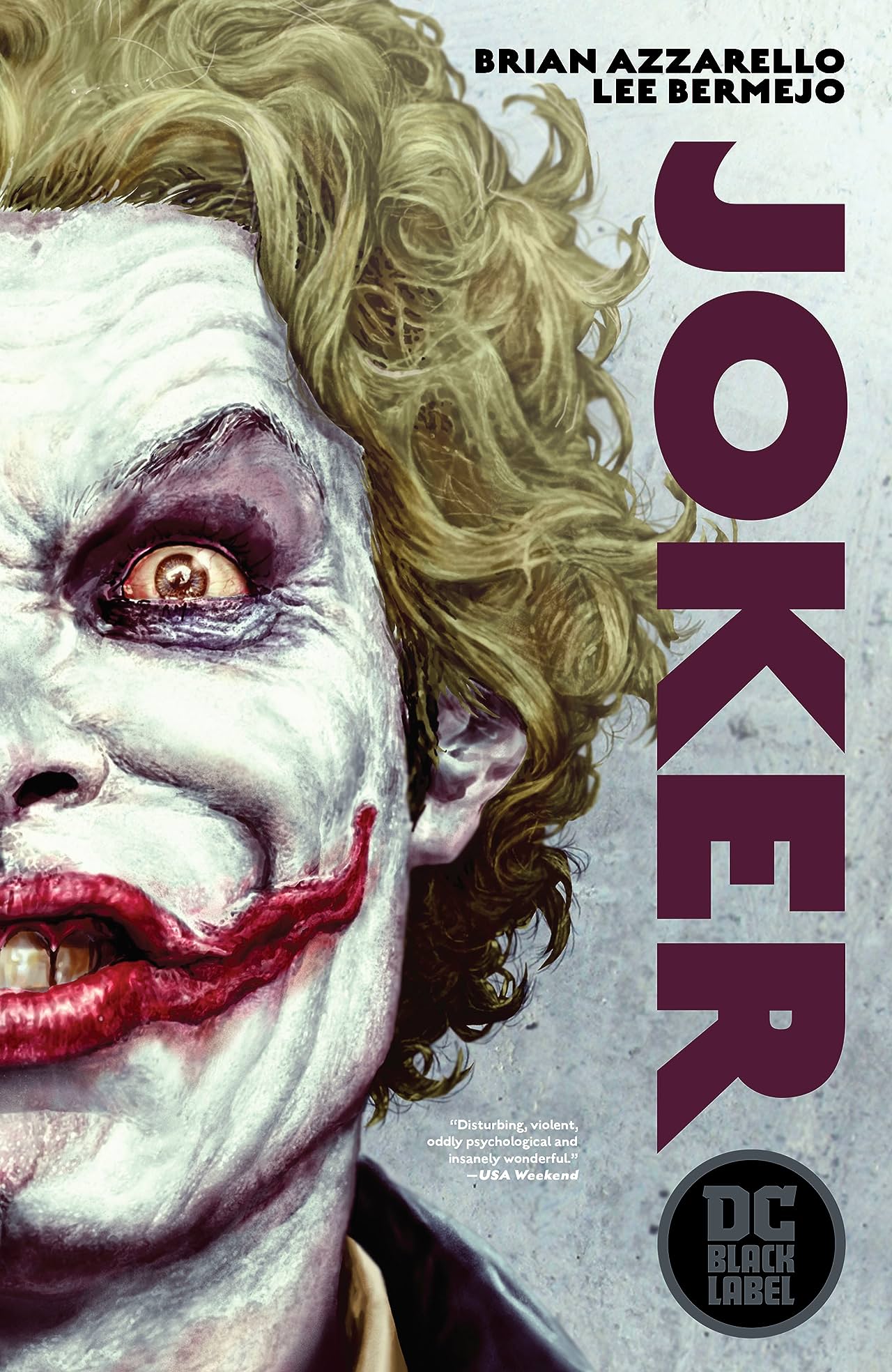 This is, frankly, the most intimate story about the Joker yet, and it barely involves Batman. The narrator is a low-level henchman named Jonny Frost. It deserves even further exploration—which our very own Shah Shahid did in his article commemorating the 10th anniversary of the story. 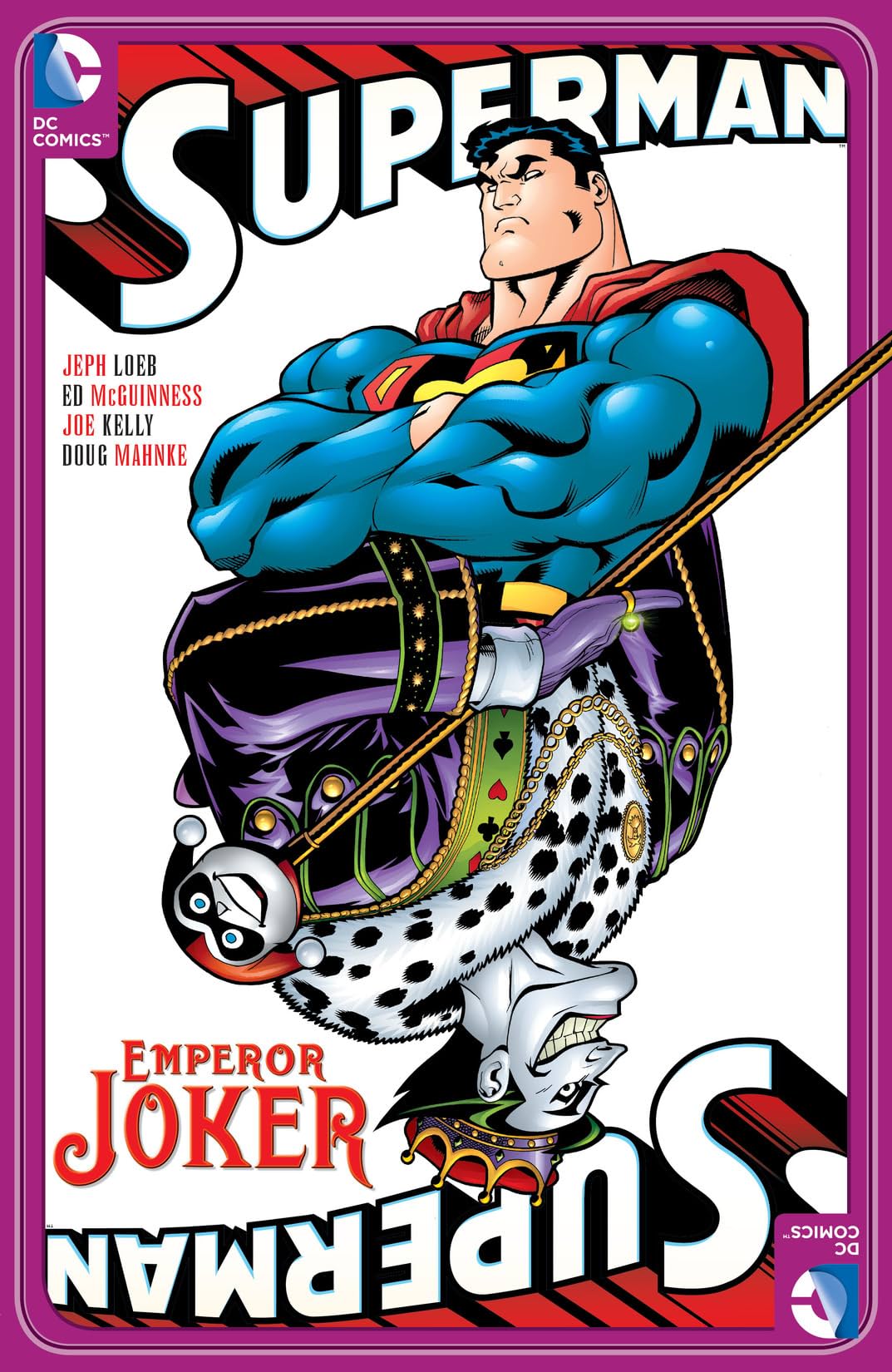 While it’s usually Batman tussling with the Joker, one of his greatest stories put him up against Superman. Seems crazy? Well, it’s the Joker, so it comes with the territory. Joker, through Mr. Mxyzptlk, gets god-level powers. He can distort reality and uses it in every way you’d imagine the clown prince of crime to do so. His favorite trick? Killing and resurrecting Batman over and over and over again. Since Superman has a weakness to magic, the two were a decent pair of adversaries. Mahnke is excellent at drawing Joker, but for those big, epic stories, you can’t go wrong with McGuinness.

Death of the Family 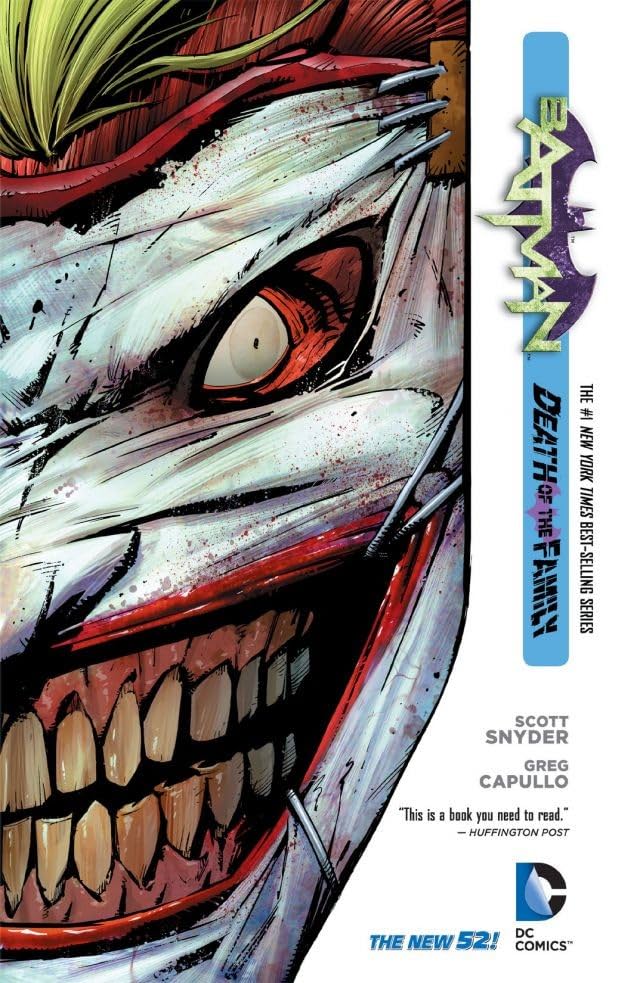 In the classic Death in the Family, Joker brutally murdered Jason Todd, the Robin at the time. Fans hated this version of Robin so much, that when DC set up a telephone survey to vote if Todd lived or died, they overwhelmingly voted death. In Death of the Family, we’re looking at a more symbolic death. Batman has a secret he never told his Bat-family: Joker knows his identity. He’s been in the Batcave, and Bruce Wayne—not Batman—even visited him in Arkham Asylum to threaten him. And now, with his face ripped off and tied back on like a mask, Joker is even more vengeful than ever before. Joker doesn’t go after Batman directly; he goes after the family: Batgirl, Red Hood, Robin, Nightwing, Alfred, Gordon, etc. But he also goes after Batman’s villains. Joker, Penguin, Scarecrow, Two-Face, etc. Even Harley Quinn warns Batman that the Joker has never been like this before. It’s a massive event, and sets the groundwork for later stories such as Endgame and Dark Nights: Metal.

The Batman and Joker Legacy is the Backbone of Comics

Superman vs. Lex Luthor. Professor X vs. Magneto. Captain America vs. the Red Skull. Wolverine vs. Sabretooth. Thor vs. Loki. All of these dichotomies are based on Batman vs. the Joker. They were the originally arch-nemeses towards each other. But they also come from elsewhere. For comics, Batman and the Joker are Sherlock Holmes and Moriarty. The two are in an endless dance, continually outsmarting the other. And whether you love his portrayal or not, there is always one great thing about the Joker: he can be anything. From the 1966 campy Batman show to the terrorist in The Dark Knight, to the gangster in Suicide Squad and everything in between. And now Joaquin Phoenix’s newest rendition. It’s always fun to see how a new actor or voice or writer will interpret Joker.

Oh, the other character who can get away with winning-while-losing? Loki, of course.