Avengers/FF: Empyre #1 Plants the Seeds for a Massive Event 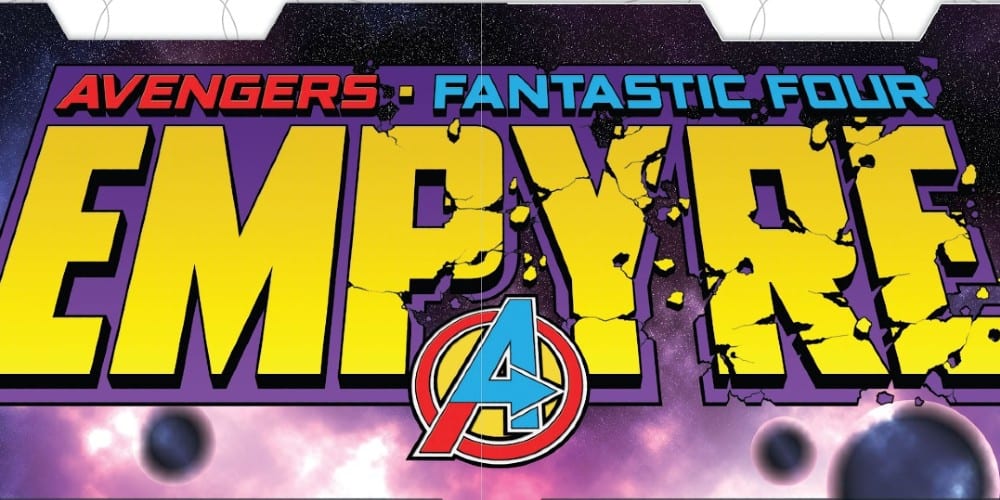 Originally, Avengers/FF: Empyre, which kicked off this week with issue #1, was going to be a much bigger event. But because of the Coronavirus pandemic and the quarantines, Marvel Comics had to reschedule and rethink their entire line. As a result, several tie-ins are just gone. While it did make collecting the event a little easier, the cancelations might indicate that Empyre was bigger than it needed to be. After reading the first issue, however, it’s a shame that we won’t see the full-scale epic that Marvel intended to give us. And Avengers/FF: Empyre #1 is just that: epic. 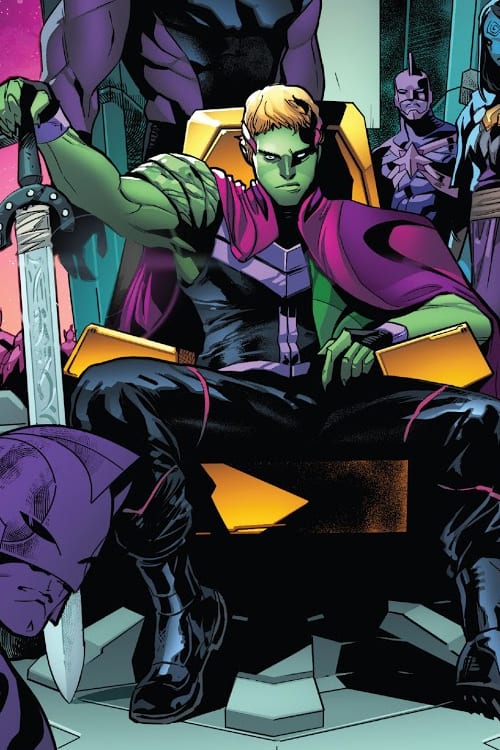 Back in Incoming, we saw Hulkling, the Young Avenger, took up a sword that united the Kree and Skrull empires. And their target? Earth. Teddy Altman, that sweet kid Wiccan’s boyfriend, is now Emperor Hulkling. But it’s not just the Kree and Skrulls teaming up here. When the unified empires arrive at the moon, the Avengers are there with the Cotati, a peaceful plant race. The Cotati are rebuilding their society, after a few thousand years, in the blue area of the moon. They are mostly defenseless against the coming invasion, aside from a resurrected plant-version of Swordsman (if you think Hawkeye is lame, you haven’t met Swordsman). The Avengers agree to help them stand against the Kree/Skrull empire.

And then we have the Fantastic Four, heading home after rescuing two children, one Skrull, one Kree, who were forced to fight over and over and over again in a Casino. The Fantastic Four is the most pacifist team in comics, so, of course, they immediately try to reason with Emperor Hulkling and the two empires. They’re kind of on everyone’s side. It’s …cute. So, as the Avengers and FF look for violent and non-violent ways to stop the Kree/Skrull invasion, we’re all looking at Emperor Hulking, wondering what’s going on in this kid’s head and if he’ll cave under pressure from four different factions.

If only the heroes had all the information.

Everything We Knew About Empyre So Far Was Misdirection 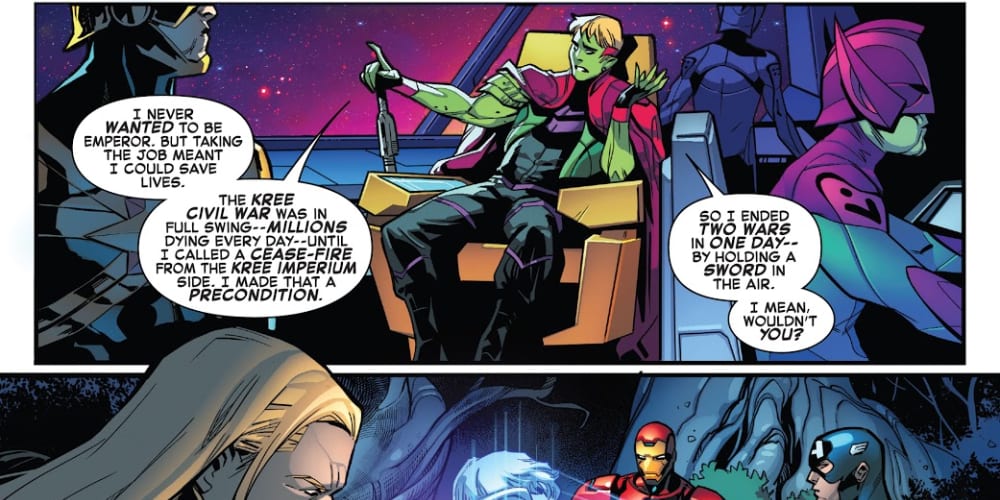 Some spoilers ahead. As stated above, all eyes are on Emperor Hulkling. Both the FF and Avengers believe that the Kree and Skrull leaders manipulated into playing his new role. Maybe he was, but part of his reasoning is sound. As he says in the image above, he ended two wars and saved billions of lives by lifting up a sword. Even if the two empires were exploiting his empathy, he’s still not wrong. But, then, why is he leading an invasion towards Earth? What does he have against the Avengers and the superheroes of a “backwater” planet?

Nothing. Teddy isn’t worried about Earth. It’s the Cotati. Yeah, those friendly sentient plant people. It turns out, after a few million years, the Cotati are kind of pissed off at the genocide of their people. The Kree/Skrull Empire was never coming for Earth—they were coming to stop the Cotati. But, because Tony Stark and the Avengers defended them, the Cotati were able to launch their initial attack—and they plan to invade Earth, killing all non-plant life and making the planet their new homeworld. Good job, Tony!

The Avengers Vs. Kree/Skrull Forces Battle is One of the Coolest Space Battles in Comics. Ever. 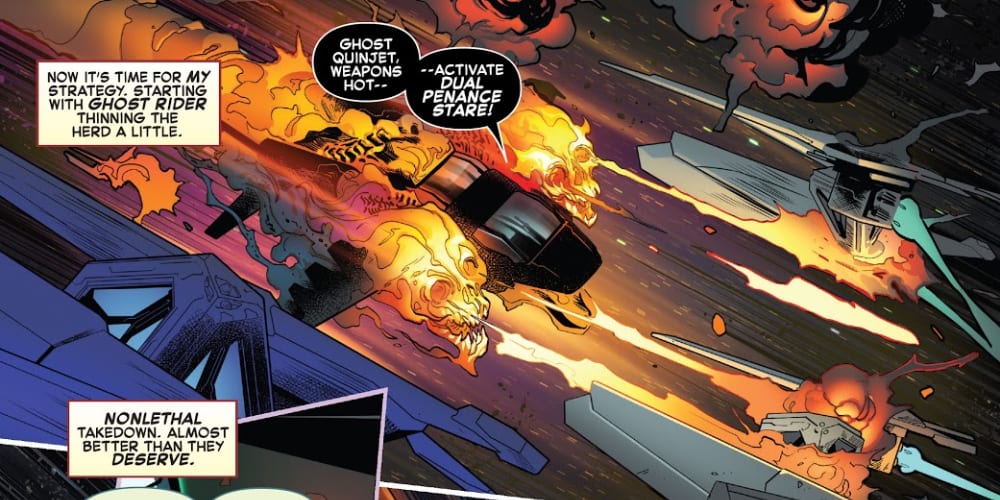 Let’s start with that image above. Ghost Rider turns the Quinjet into the Ghost Quinjet. He weaponizes penance stare in a way that can only be professionally described as “f****** awesome.” Meanwhile, She-Hulk takes up a new weapon that helps channel her rage. Black Panther shows off his new spacesuit. Super-Skrull does some crazy combination of Fantastic Four moves.

But it’s Hulkling who gets one of the most awe-inspiring moment: 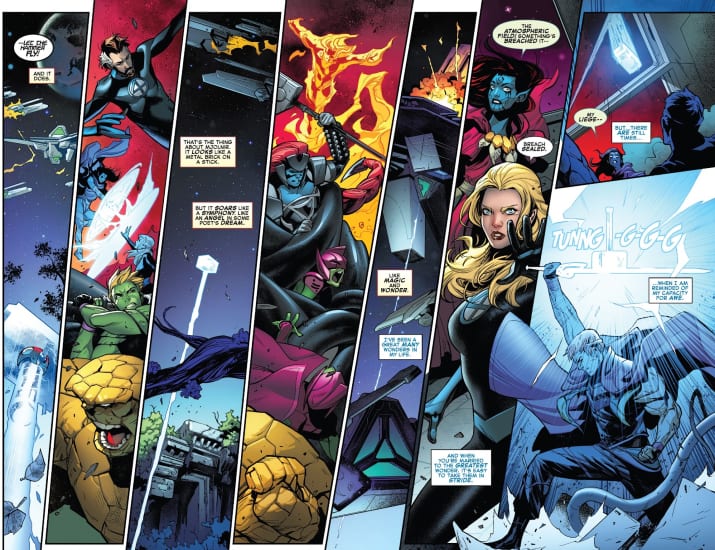 What in the name of the Kree’s blue ball sacks is that sword made out? (Image: Avengers/FF: Empyre #1, Marvel Comics)

Avengers/FF: Empyre #1 Is Just the Opening Salvo—There are Still Five More Issues and a Lot of Tie-Ins

The hardest part about starting big is keeping up the momentum. For example, what if the MCU began with Infinity War. One, we would have no emotional investment, but two …it’s hard to follow. Between all the big moments, it feels like Dan Slott, Al Ewing, and Valerio Schiti took all their toys out too soon. The Ghost Quinjet feels like a final issue reveal, not the first issue, especially since the Kree take it down so early. Where will this story go over the next two months? And, again, Marvel intended this to make this bigger.

Wherever it goes, I’ll go along for the ride.

Grade: A Three-Night Stay in the Moon Garden! 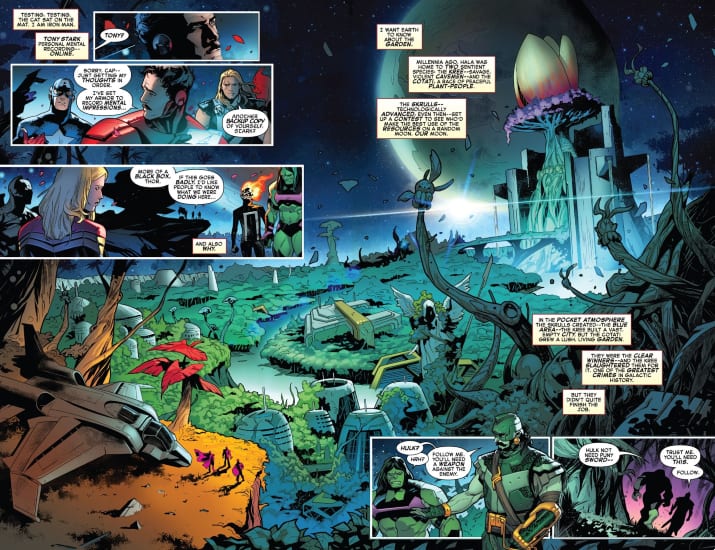 Valerio Schiti’s art is anything but what that name sounds like. Look at this beautiful landscape! (Image: Avengers/FF #1: Empyre #1, Marvel Comics))