Awesome Comics Coming Out in August 2019 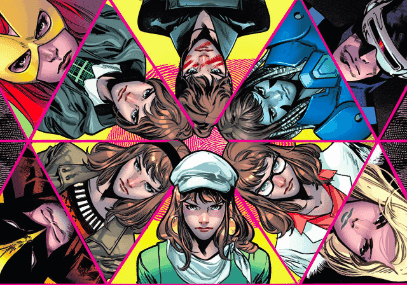 We just experienced the hottest heatwave in American history, but the summer of 2019 is only half over and we still have August, the hottest month, to get through. You know what that means. It’s time to load up on comics and stay inside! Here are some comics coming out in August 2019 to look forward to while you bask in the breeze of your air conditioner.

Comics of August 7th: Light on the Wallet, Heavy on the Content

When Carnage has a vendetta, everyone should be afraid. And now, Cletus Kassidy and his murderous symbiote are out to kill all the other symbiotes out there. Donny Cates and Ryan Stegman bring Carnage back to New York City, angrier than ever. While House of X will be an intricate sci-fi event, Absolute Carnage looks to be a crazy ride through murder and mayhem. The first issue is also a “director’s cut,” meaning we can look forward to a ton of extras from the creators. Carnage hasn’t been a major player in comics for a while, but that changes this August.

House of X #1 was brilliant, but it was only setting up the groundwork for the event. Now we get to see the “the fight for the future of mutantkind” begin. Of course, Marvel and Hickman are being very secretive with what’s happening in this event, and in the future of the X-Men comics in general, but at least in August, we’re getting a good chunk of this mutant gamechanger.

Time to switch gears here. As far as August comics go, we’re getting a lot of great original graphic novels (OGNs) about historical and social issues. Irena Vol. 1 is the first of those. Before looking through the August solicitations, I had never heard of Irena Sendlerowa, but everyone should know about this hero. Irena was a social worker in the Warsaw ghetto during World War II. While working there, she smuggled out 2500 Jewish children, saving their lives. Her story is amazing and tragic, and I can’t wait to learn more about her, by the publishers who also gave us the incredible Puerto Rico Strong.

Back to the superhero world one last time for August 7th’s comics. Lois Lane #1 was great. In the first issue, Lane, metaphorically, demolished the White House as if she were her husband Superman himself flying fist first into the President’s home. But challenging the President’s border camps policies is only one of three stories she’s chasing. There’s also the murder of a Russian journalist, who is both a friend and rival of Lane, and there’s a threat to Superman that Lane won’t even tell him about. It’ll be great to continue following her multiple investigations.

Comics of August 14th: War is Great for the Power of  the Villains

When the name of the storyline itself is “Death of Speed Force,” we should definitely see what’s going on in Flash comics this August. Barry Allen joins the “Year of the Villain” after the finale of “The Flash Year One,” and like many heroes during this event, things aren’t looking hopeful for the speedster. Sure, he has a new sidekick, HQ, but with Captain Cold and Lex Luther working together—while Flash is getting slower—Barry’s life is going to get a lot more complicated.

Powers of X and House of X tell one story—much the way Hickman used Infinity, Avengers, AND New Avengers to fully tell the Infinity event. We know even less about this series than we do House of X, other than that we’ll be looking at the past, present, and future of mutants. But if covers give us clues, it looks like issue #2 will focus on the various villains of the X-Family.

War of the Realms

War of the Realms ties years of Jason Aaron’s Thor stories together, as Malekith invades New York City after already conquering the other ten realms. Unfortunately, Earth is left with only a few protectors, especially since Thor is trapped in Jotunheim (Frost Giants home). We’re left with Doctor Strange, Black Panther, and Jane Foster—working with some of Marvel’s best “street-level” heroes—to defend Earth. The event is big, crazy, and we see characters change quite a lot. If you don’t think Punisher belongs in an Asgardian tale, well, you were wrong. If you didn’t read the single-issue comics, be sure to get the collection in August.

CHEETAH IS BACK! Does this have anything to do with Cheetah being the villain in next year’s Wonder Woman: 1984? Maybe, but she’s always been a great Wonder Woman villain, so seeing her join The Year of the Villain event is a delight. And, like Captain Cold in Flash #76, Cheetah is also working with Lex Luthor. DC Comics is ramping up the villains in August, and it’s going to be a great time.

Comics of August 21st: More Villains of the Past, Present, and Future

Neal Adams co-created Ra’s Al Ghul with Dennis O’Neil in 1971. Nearly 50 years later, he’s returning to the character for a Year of the Villain mini-series. But this is an interesting story. Terrorists are attacking Gotham, and Batman’s investigation is hindered by Deadman (generally a hero). Meanwhile, al Ghul’s private security force is helping GCPD protect citizens from nuclear annihilation. But this is al Ra’s al Ghul—there is always going to be something more going on.

Wade Wilson is a mercenary. He takes money, and in exchange, he kills things. Most mercenaries, like Deadshot for instance, drive a hard bargain. Deadpool? He’s the bargain bin merc with a mouth, and he’ll take a job even if it’s from a little kid offering up just $7. The contract: Peter Quincey is having nightmares, so he wants someone to kill them. Of course, this means we get Deadpool vs. Nightmare. August has some serious comics. This isn’t one of them.

Another OGN this August tackling a serious subject in the comics medium. New World explores the colonization of the Americas through people we rarely see in these stories: “a Native Indian seeking revenge against those who invaded her land, an African musician fighting for freedom against those who enslaved him, and a Portuguese sailor in search of redemption.” Vignolli has a very unique style, and his art in this series almost feels like if comics were created in the colonization era, this is what they would have looked like. Check out his blog for some preview art.

This August, Marvel Comics present, “The crotch of the Sentinel!” Okay, so yes, the series continues, and yes, I am going to include everyone because it’s a great time to be an X-Man fan. But again…the solicitations is kind of light on the details.

Comics of August 28th: Some Light Reading About Political Unrest and Social Uprisings

After the Spring: A Story of Tunisian Youth

After the Spring was originally published in French and is finally getting an English translation. The story takes place in the wake of the Arab Spring, a major anti-government rebellion that swept North Africa and parts of the Middle East in 2011. But what happens after?  Aldeguer explores this through four young Tunisians trying to figure out what their futures will look like in a country that has unstable leadership and a failing economy. We might have seen news reports in 2011, but with this late August release, IDW Comics will bring a more personal narrative about the Arab Spring to us.

Just because we’re back to superheroes, doesn’t mean we’re back to lighthearted fun. Batman/Superman #1 spins out of The Batman Who Laughs, and the duo needs to search Gotham to find which heroes have become horsemen for this evil alternate-reality version of Batman. It’s been a while since DC Comics gave us a Batman/Superman series, so if you missed this infamous team up, you just have to wait until the last week of August to see them together again.

It’s like IDW Comics chose August 28th to hit us with a double punch of serious world issues. While After the Spring focuses on the events of the 2011 rebellion, Burmese Moons goes back a bit further, to the 1988 Burmese revolution in what is now Myanmar. The OGN follows Thazama, a young man of the Zomi tribe. When military forces start dictating his community, making them give up more and more food, resources, and even their own people, Thazama decides realizes that he is destined to fight back, and joins the rebellion in hopes to save his loved ones.

Back in March, Captain Marvel debuted in theaters and went on to be the second Marvel solo debut film to gross over a billion dollars. But unlike Black Panther, we had not even met Carol Danvers in a previous film. The movie was a delight, and though it will be a few years before we get another one, we at least have Kelly Thompson giving us more Captain Marvel stories. The series so far has been excellent. Generally, Marvel Comics will release the trade within a month, after the last issue in the volume comes out, but they waited from May to August this time. Why? Maybe because Avengers: Endgame comes out on home release in August, and fans will want more Carol after this epic moment:

Look, I told you the deal already. August is full of Hickman’s X-Men comics and we should be excited for every single one.

Marvel Comics #1000 is going to be massive. The solicitation boasts that the comic “ the entirety of the Marvel Universe of characters!” That’s like…5000 characters. We already know that Neil Gaiman is writing a Miracle Man story for this, and that the 80th-anniversary milestone itself will reference Marvel Comics #1 (which debuted in October 1939, making August a few months too early for a proper anniversary celebration). If anything, it will be a fun collection of talent coming together, but this will also set up some mysteries for the future of the franchise.

The Wicked + The Divine is one of the best and most original indie comics out there, and “Okay” is the final volume in that series. It’s gods, glitter, and rock music. Like Unwritten, we’ll probably do a “Great Indie Comics” installment of this one. Maybe pretty soon.

What are you looking forward to the most? Any you think I should have included? Are you as excited about the X-Men as we are? Comment and tell us!