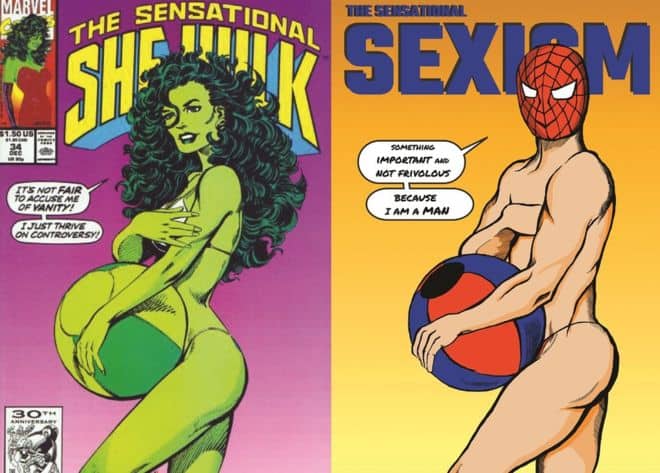 An issue of The Sensational She-Hulk (left), with Shreya Arora’s reimagination (right)

Feminists will see sexism in the minutest of places. An Indian artist, Shreya Arora, who not only talk about sexism but got back at the ‘sexist’ artists in an outrageous way. In an interview with BBC 100 Women, Arora revealed her passion against sexism on comic book covers.

She challenged drawings of woman in comic books like Marvel and DC as sexist. This is not the first time Marvel, DC and other comic book publishers have been accused of sexism. Her reaction to ‘sexism in comics is by parodying the male heroes in poses typically associated with women.

In the 1991 comic book cover, She-Hulk, a superwoman with super strength and speed. Just like her male counterpart, the Hulk, She-Hulk is also completely green. Arora found it offensive that She-Hulk was portrayed on the cover of the 1991 comic book in a seductive pose, wearing a G-String bikini with sharply emphasized curves. She said that the Hulk’s visual representation was focused on his strength, but She-Hulk’s was on sexuality.

Due to her accusation, Arora decided to flip the narrative and the result is parodying comic book covers with familiar characters like Superman, Batman etc in strikingly unusual pose and outfits. The following are the examples of her works:

She also has some wishes which are:

However, her project has been criticized for not acknowledging that comics portray not only female characters with unrealistic body shapes and poses, but do same to their male counterparts too.

Arora has other projects that addresses sexist representations of the female body and gender imbalance in media.

Going through the colors of Marvel’s ‘The Avengers’ comic book covers, you will notice the shift to a more complex, cinematic palette.

Down the memory lane, the appearance of Avengers today is nothing compared to what they look like in classic comic-book versions. Technological advancement contributes to the shift to a more cinematic aesthetic. Therefore, when Marvel’s “Avengers: Age of Ultron” premieres next month, the sets of iconic gamma ray-induced green of the Hulk, Iron Man’s red and gold armor and Captain America’s red, white and blue uniform bombards viewers.

As Marvel’s characters started featuring in big-budget superhero movies like “X-Men” in 2000, the darker, muted colors of the movies began to creep into the look of the comics. Let’s explore the color shift below:

Each “Avengers” cover is analyzed and reduced to 64 colors (excluding black and white). The colors were then counted and plotted to generate a palette. Due to this, the colors have been sorted by hue and today the covers show a pronounced difference in color use.

Likewise, the first issue of “The Avengers” comes with about eight colors (including black and white). However, the 2014 cinematic cover has a dark and moody color palettes.

The perspective of view has since changed. As a result, in the new edition like the 2004, the heroes got a lower camera angle shoot giving the heroes a more heroic presence than the “flatter” perspective of the 1992s.

Supervillain Magneto’s energy beams emitting from his hands appears as squiggly lines with a pale yellow in the 1967 cover. But in 2013, an improved glow and crackle technique made possible the wide range of lighting effects in digital illustration software e.g. Adobe Photoshop.

Artists of old make the most technical limitations by using simple, bold palettes to grab readers’ attention e.g. the 1968 cover by John Buscema’s The Vision drawing. In 2012, the same approach with extra flare resulted in the same effect.

Finally, Special effects like glow or transparency of a searing inferno were different with the older four-color separation process. This limitation has since been crossed today and can be seen on today’s comic book covers.