Author Rebecca Roanhorse is not new to genre fiction. She is known around these parts for her Star Wars novel that was published last year. But she is also the author of several fantasy books. Her work includes the award-winning Trail of Lightning, and its follow-up Storm of Locusts. She also writes in the comic book world as an author for Marvel’s new Indigenous Voices series. But now Roanhorse has turned her attention to an epic fantasy world of her own making in the stellar Black Sun.

Black Sun is the beginning of Roanhorse’s new Between Earth and Sky trilogy. It follows three disparate characters who all have vital roles to play in a changing world. There is a Naranpa, who is struggling to hold onto her position as the Sun Priest of an ancient order. Serapio is a young man who was born to become the vessel of an old god. And then there is Xiala. A descendant of a mysterious and magical race who just wants to captain her own ship. Let’s dig into Black Sun and see what the new trilogy by Rebecca Roanhorse has in store for us. 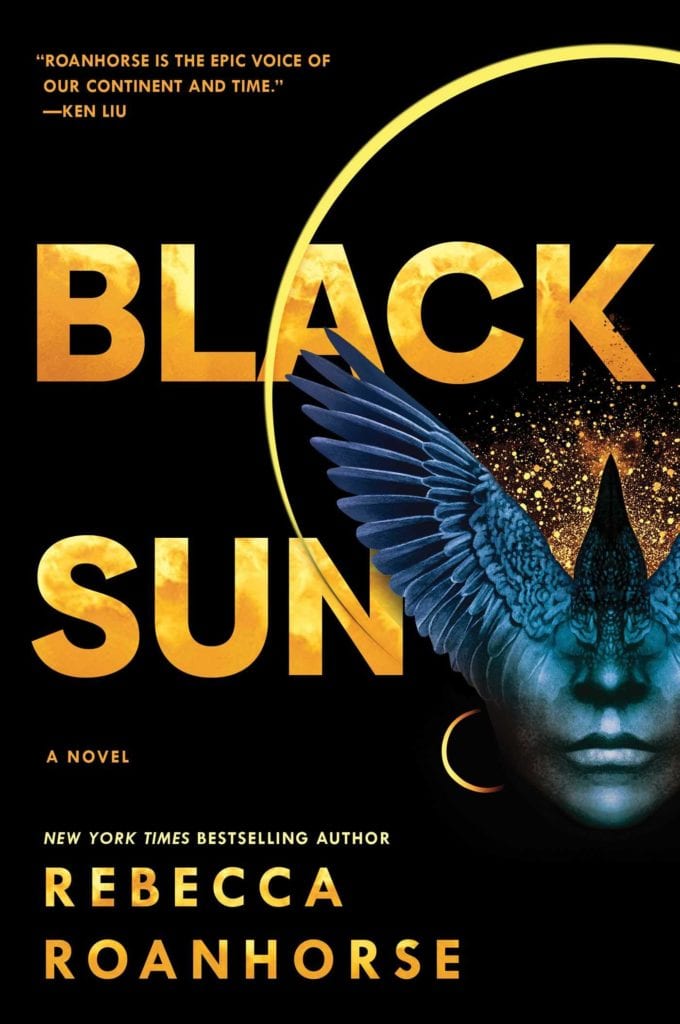 Black Sun is Roanhorse’s first foray into epic fantasy and it is a feat in worldbuilding. Roanhorse draws from indigenous cultures and folklore to create a world that is truly unique in the fantasy genre. And like any good epic fantasy it is rife with politics, magic, and complicated characters. There are tragic characters training to become a god, and will sacrifice everything to do so. A hard-drinking bisexual sea captain with magical powers. A corrupt priesthood that one young woman is desperately trying to change, despite the bias against her. This is truly a character-driven book, so let’s take a look at the three main protagonists.

Photo by Jongsun Lee via Unsplash

Naranpa is a sun priest, technically the head of the priesthood that rules over the continent and the city of Tova. She is a young woman who took over the role of sun priest after being hand-picked by the previous one. She struggles to regain the power that her predecessors held in order to reform the priesthood itself. Naranpa is an unlikely priest, having ascended from poverty to enter the order while most members are from the elite upper-class. She faces constant discrimination from other priests for her low birth, and struggles to forget her past.

Naranpa is a strong-willed individual who clearly wants to make the world a better place. But she makes plenty of mistakes along the way. Her naivete and inexperience often shows all too clearly on the page. However, this makes her a stronger character. She is human and flawed, and this makes her a relatable character. She is a true believer in the priesthood, despite the obvious corruption that she is powerless to change. However, this does not stop her from trying. Her obvious desire to make peace with the tribes, and to help the people of Tova is admirable.

The priesthood itself is haunted by a history of mass murder, and strife with the various tribes that inhabit the city. In particular they are at odds with the Carrion Crow tribe, who await the rebirth of their long lost god. In the history of the world, the priesthood murdered an entire generation of the Crow tribe and the current members seek bloody vengeance.

A Crow God Rises In Opposition

Photo by Kumar Harsh via Unsplash

For years members of Carrion Crow have awaited the promised rebirth of their long-lost god. This is where Serapio comes in. The young man grew up in isolation in far-away mountains, instead of with his tribe in the city of Tova. His mother promised him that he would become a god, and his entire life is dedicated to achieving this. He is blinded, scarred, and trained to kill. His entire life hinges on the moment that he will face the sun priest and exact vengeance for the tribe he has never known.

It is unclear exactly how Serapio will become the Crow god. (Did it happen when he was born? When he was blinded? Will it happen when he faces down the sun priest?) But it is clear that he has some unique magical abilities, able to wield shadow magic and command crows. He is also expected to sacrifice everything in his quest to exact vengeance. Serapio is a sympathetic character, but he might also turn out to be the villain.

By setting up Serapio in opposition to the equally sympathetic character of Naranpa, we are left to question exactly who we should be rooting for. And this is entirely intentional. The complex world sets up the tension between the Crow tribe and the priesthood. We understand the Crow’s thirst for vengeance, as much as we understand the need for the priesthood’s existence. This is a testament to the worldbuilding that Roanhorse does with every line of text, establishing the diversity of the people, and a complicated world history.

Singing The Waters With Xiala

Photo by Nsey Benajah via Unsplash

The third major protagonist in Black Sun is the character of Xiala. She is a Teek, descended from a magical race that can utilize water magic and possibly do much more. In many ways, Xiala was my favorite character. She is brash and no-nonsense, she only wants to live her life in peace without answering to anyone else. But she also has issues with authority, and often finds herself locked in a jail cell or ordered around by men in power.

Despite all of this, Xiala is still a pretty mysterious figure in the landscape of the book. We know that she is a Teek, but we don’t know exactly why her race is so reviled by others. There is an implication that the Teek can use their magical Song and powerful voices to control others. It seems like they are a race of sirens. This is backed up by the fact that the Teek are said to be a race of all women who can commune with the goddess of the ocean. The creatures of the sea are their siblings, the goddess is their mother. Unlike the sun priests who look to the stars for answers, the Teek draw their magic from the waters of the planet.

We learn this information in tantalizing snippets throughout the book, but do we not know much about Teek history. Or why Xiala left her people to take to the sea. There are hints at a larger mystery surrounding Xiala, and exactly what she can do with her water magic. I’m sure that these mysteries will be further explored in future books, and I am excited to learn more about her character and the magical people she comes from.

A World Drawn From Indigenous Culture and Folklore

Perhaps one of the most refreshing things about Black Sun is how unique it feels in the genre. When it comes to epic fantasy, we are so accustomed to reading stories based on Western European fairy tales and folklore. And there are authors doing excellent work in reviving those old stories and giving them a new and subversive twist. But it was honestly so exciting to read a book that draws from indigenous cultures and folklore. This is something that is rarely seen in the fantasy genre. It is even more rare for that world to be written by an author with an indigenous background herself.

In an interview with NPR, Roanhorse said “I have been reading epic fantasies inspired by European settings since I was a child. And while I’m still a fan of many of these works, I longed to see something different. So I wrote it. I never made a conscious decision to go in that direction. That direction was simply the natural culmination of my love of the architecture, poetry, politics, and history of these places and people that I’ve been learning about forever.”

Black Sun Is The Epic Start To A New Fantasy Trilogy

Despite everything terrible that has happened in 2020, the one bright spot is that it has been a banner year for the fantasy genre. Black Sun joins the ranks of the many new fantasy novels that came out this year, that kick off a new trilogy or series. Rebecca Roanhorse is in good company with authors like Andrea Stewart, whose novel The Bone Shard Daughter is another excellent opening chapter in a new trilogy. If you enjoyed The Bone Shard Daughter, then definitely check out Black Sun.

The cast of characters in Black Sun are all incredibly compelling and they jump off the page. Each one has their own distinctive personality and history that informs who they are. This makes each individual – no matter how small a role they play – feel truly life-like and real. You understand their motivations and conflict, and this makes it easy to relate to them even if you don’t necessarily like them.

There are four different point of view characters in Black Sun (I didn’t cover Okoa, the son of the Carrion Crow matriarch because I didn’t want to get too spoilery here). Each point of view chapter transitions seamlessly into the next, with history, memory, and backstory all woven throughout each character’s story. The prose is vivid and atmospheric, really evoking the radiant glory of the sun priests, or the shadowy menace of the crows. Definitely a page turner that will have you reading late into the night. Black Sun was a fascinating and delightful start to the new Between Earth and Sky trilogy by Rebecca Roanhorse. We look forward to reading more in this series.

Black Sun is out now from from Saga Press, an imprint of Simon & Schuster. For more book reviews, be sure to follow Comic Years on Facebook and Twitter today.